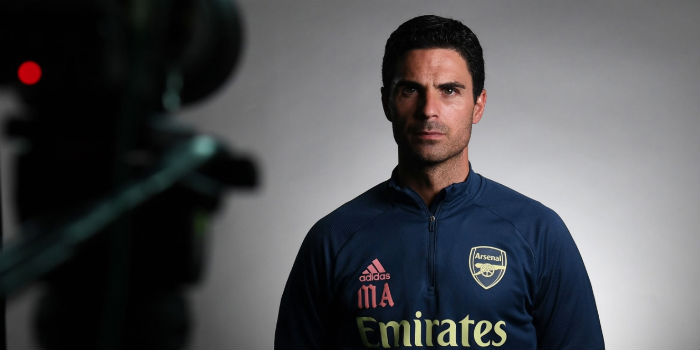 Mikel Arteta is now Arsenal manager after the club confirmed an upgrade in his status from head coach.

The promotion – implemented following the exit of Raul Sanllehi – makes for a streamlined structure with only Technical Director Edu sitting between him and Vinai Venkatesham.

The boss hinted prior to the Community Shield that the way the club’s hierarchy made decisions was being examined. That he’s been given more responsibility is a show of faith in his ability and certainly makes sense.

Since arriving at the club in January, Arteta has played a very active role in persuading key players to stay, deciding who gets contract offers and identifying transfer targets; all of which, technically sat outside his ‘head coach’ job description.

In an interview with Arsenal.com, Vinai Venkatesham said: “Mikel’s been here since the end of December and the last nine months have probably been the most challenging nine months in Arsenal’s history – and we’ve been around for 134 years. Despite all of those challenges, Mikel has been driving this football club forward.

“He has lifted the spirits and lifted the energy here at London Colney and with Arsenal fans all across the world. He is doing an absolutely phenomenal job.

“The other thing that’s clear is that right from the day he walked through the door, he was doing much more than being our head coach. So we’re going to be changing his job title going forward. He’ll move from head coach to be the first-team manager. That’s recognition of what he’s been doing from the day he walked in the door, but also where we see his capabilities.

“He is doing a great job of coaching the first team and that’s his primary responsibility, but there is so much more that he can bring and that’s why we’re making this change, in recognition of his capabilities and also the job that he’s doing already.

“So in terms of how that will work, going forward Mikel will join a really strong team with Edu and they’ll be working really, really closely together to manage all the other elements of our football operations that are so important, whether that is analysis, recruitment, high performance or medical, they’ll be looking after those areas together.

The Kolkata Gooner
Reply to  Punter

So Wenger was bang on when he suggested that the term “Sporting Director” was corporate gibberish. This vindicates him.
It seems what we really needed was to replace Wenger with another decent manager, and not three new positions and a head coach.

Futsboller
Reply to  The Kolkata Gooner

Syed
Reply to  The Kolkata Gooner

Great to see another gooner from Kolkata on this site!

The Kolkata Gooner
Reply to  Syed

Never thought I’d meet another gooner from Kolkata on this site mate! Lovely to know there’s more of us. 🙂

Wenger the sequel, strap yourself in lads and ladies

I’d hope for a better Ending when the time comes though.

Let’s hope so. Off to a very good start.

I’ve already pre-ordered the book ‘Artenal – The making of a 10-times-in-a-row European Champions’.

I am pretty confident Arteta can do a Wenger and may be even better because Wenger had to deal with a stadium move. However, I hope Edu turns out to be more David Dean than a Gazidis..

Excellent he IS a manager regardless of title that was as clears as day ,hope he excels us to where we belong and that this prolongs his stay. Lets make this the best place for a Manager and players to be at.

(That would make it better for us fans as well obviously)

Slow down… lets see where he is in a years time.

Good decision and he deserves the show of faith. I am really pleased he is our manager and I think we have every right to be excited with him at the helm. No other manager has his perfect Lego hair. We are very lucky.

???Congratulations Arteta. Well deserved. Despite the gloomy pandemic situation across the world, you’ve given us gunners nothing but joy so far. Long may it continue. Blessings

Well deserved, Arteta! Only 6 months at the helm and I am already so nervous about losing him. Hopefully it is just a beggining of something amazing.

Fully support this despite being an Arteta sceptic before he was appointed.

Think Mikel loves the challenge of coaching/managing, and will no doubt grow into the role

Unless he gets a payrise seems meaningless.Makes me think of Gareth from The Office !

Believe it or not, these things can have an impact when working in executive teams like this. Previously, it’s possible that Arteta’s involvement in matters beyond coaching of the first team could have annoyed others at the club (Raul?) who may have felt he was overstepping his authority. Now, the club have made it crystal clear that he will be involved in these duties and it therefore gives Arteta the political cachet and authority to make bigger decisions. Having clearly demarcated roles is important in keeping an organization working efficiently and avoiding the types of conflict I mentioned. This newly… Read more »

Well yes. But maybe now he will be overburned from the task. Plus if he is fired we are really dependent on Edu to keep the team together…

I feel like Arteta is Obi Wan, and his teacher Qui Gon Wenger approves

He’ll break Arsene’s record of 22 years as manager of Arsenal.

My own conspiracy theory here:
Arsenal Board: Auba, sign a new contract.
Auba: I will not sign unless you make Arteta the manager. He’s the reason why I’m staying.
Arsenal Board: Deal
Auba: Announce Arteta as the manager first so I can believe you.
Board: We will do that now. Can we announce your contract after that?
Auba: Yes, you can…..

Ibrahim
Reply to  Me from Here

I don’t think so bruv

Job title irrelevant. His actions have spoken far more – he IS the man to lead us forward.

Mustafi will be the head of recruitment by the end of the month and David Luiz will be the goalkeeping coach next season.

Now make him CEO, Board member and majority shareholder!

Looking forward to when my hair are grey and there’s an AKB VS MOB going on here in 20 years ?

Can’t remember the last time I was this excited for the future. I hope Mikel stays for a long long time and changes the fortunes of the club massively. What a guy!

Like a new Manager! The club just upgraded his title, that’s all. He walked in as a manager. One just need to hear him respond to questions, it’s comprehensive always! It is like that scene from Matrix, when he is ready, he really doesn’t have to dodge bullets, err questions. 🙂

Congrats Mikel!! We trust in him, hope that he can bring more success and stay for many years to come

What’s in a title? We’ll see. I guess it brings him in line, title-wise, with “managers” at other clubs and he gets to do the special “manager’s handshake” at the start and end of games. More expenditure changing the sign on his office door though … when will it end?

Wow. I believe Arteta has all the makings of the greatest Arsenal manager ever. He has 13 major trophies in him before he leaves the Armoury.

“So in terms of how that will work, going forward Mikel will join a really strong team with Edu and they’ll be working really, really closely together

But those are going to be their responsibilities and I think we’re going to have a really dynamic team to drive this club forward.”

I think really is his word-of-the-week.