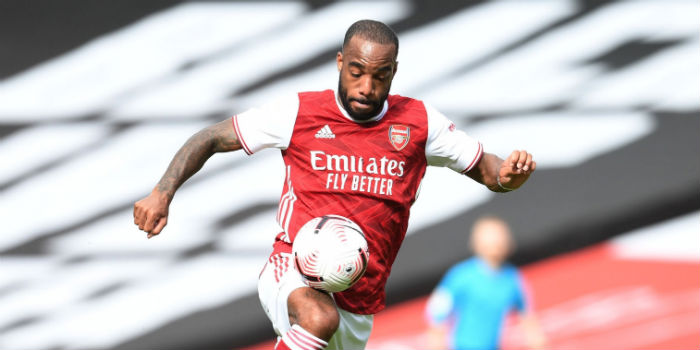 Alex Lacazette has made it very clear that he has no intention of leaving Arsenal this summer and says he’d be unhappy if rumours of the club trying to include him in a swap deal for Atletico Madrid’s Thomas Partey were true.

The France international has two years left to run on his current contract at the Emirates but has been tipped for an exit this summer because the club needs funds to strengthen other areas of the pitch.

In an interview with L’Equipe on the eve of the new season, Lacazette said: “I am at Arsenal, I signed a 5-year contract to progress & win titles. I have another 2 years. I am determined to stay.”

When challenged with the rumours of his participation in a swap deal he added: “If that is true, no, that does not make me happy.”

Interviewer: “But when you read that Arsenal want to put you in a deal with Atlético Madrid for Thomas Partey, that must make you happy?”

Alexandre Lacazette: “If that is true, no, that does not make me happy.”

For what it’s worth, Mikel Arteta has played down suggestions that Lacazette could leave, saying in today’s press conference: “He is really happy here, he wants to keep improving and contributing to the team. I know how good he is, the impact he is having.

“He knows about the competition he has with the front players, and again he needs to demand of himself to be the best striker at this football club, the same as the rest. He was very happy to hear that and the way he has been training and conducting himself has been excellent.”

I’ve always been keen to sell this summer given his contractual situation and patchy form.

But if we can get him firing and physical like he is at his best, he could make a big contribution in this team!

The media – Arsenal aren’t an attractive team to play for anymore.

Arsenal – Would someone leave this fucking club? For the love of god!!!

In 1 year the majority here will be complaining why Arsenal are so bad at selling and can only get a pittance for Laca (30 year old with 1 year left by then) or even worse in 2 years he’s riding out his contract to get his next big one and we get nothing.

All this sentimentality and overrating our players is why we’re 8th.

I think I’m going to take the words of Arteta and Lacs over the rumour mill.

He’s a player that would fetch a good transfer fee through his ability and contractual situation. So it becomes very easy to use write a story linking him with a move away, especially after a difficult year.

Similarly with Bellerin, I think both will stay.

Emi has expressed a desire to leave for a #1 spot.

If he goes, on the one hand it’s a little shortsighted on his part – why can’t he be #1 at Arsenal? If he stays, it should be a colossal battle between hi. And Bernd.

With so many fixtures coming up I wish Arteta would rotate the keepers — seems like that never happens, but how many clubs have two #1’s? I think the best approach would be to keep them both through the festive fixtures and decide who to sell in January when [hopefully] some fans are back in stadiums and other clubs have some more revenue coming back in.

Well put him back in the fridge.

Laca is a great striker, and I hope he stays. Unfortunately under our new system he is usually playing very,very deep which limits his chances up front. We have to come up with a solution to keep him up there so when we hit other teams on the break we have a target man up front to link the play, hold the ball, and give us an option in the box with crosses coming in.

Makes me wonder if that’s why Willian on a free was to facilitate this.

I wonder if a 4-2-3-1 is even viable? Not with a classical no. 9 and no. 10 per se, but with a target man (Lacazette) and two potentially speedy inside forwards (Aubameyang, Pepe) to break on the counter and a more advanced midfielder to play as a 8/10 hybrid (potentially Aouar)?

As much as I would like a 4-3-3, I’m not sure we have the legs in midfield and the stability in defence. Though I must say I am looking forward to a back 4 of Tierney, Saliba, Gabriel and Bellerin once they start to gel as a unit.

As fans we shouldn’t worry about funding or costs of transfers. I hope Lacazette does stay but we do need better midfielders.

Good post and I’m sure Lacazette will stay. The Midfield Messiah, however, is probably a bridge too far, mate.

Still, cheer up. We have a good squad and an excellent manager. Kroenke doesn’t give a financial shit, so I’ve stopped worrying too.

Personally, my kid’s uni fees are a far more pressing matter at the moment. The difference between me and Kroenke, however, is that I see a worthwhile cause, I take a genuine interest and I’ve coughed up what’s necessary for success to happen.

Of course he is determined to stay.
Huge wages and little expectation or pressure to succeed – no one wants to leave. Ozil a prime example…

If he’s happy to stay, I’d be happy to keep him. IMO he’s still our best lone striker and we can look a bit lost in attack without his physical presence. Having said that, we shouldn’t let him run his contract down any longer. Either tie him down or let him go.

He’s already going to be about 32 when his current deal expires. I wouldn’t be too keen to tie him down to another long term deal. I can’t see him having the natural atlethecism of what Auba appears to have, to enable him to remain at his peak well into his 30’s

He’s a different kind of player than Aubameyang, relies more on strength than pace and agility and that stays longer with age.

But all the same, we either have to sell him or protect his value by extending. We’ve let too many players go into that final year and it’s rarely worked out for us.

Right, he’s a lot like Giroud in many ways — doesn’t need to be blazing fast, can facilitate ball movement and play with in the box. The counter to that is, Arteta’s pressing style does require him to run a lot more out of possession. Would be great to extend his contract one more year to up his transfer value in either summer 2021 or 2022 (but realistically, why would he do that unless his wages go up, which Arsenal isn’t in position to do).

I love Lacazette, and hope he stays. I believe he could be incredibly important to our ability to win the games when we are expected to be on the front foot. That attitude, that smile, that shot.

We all know Kroenke doesn’t have oil wells at his backyard like Abramovich, but he could at least loan Arsenal some money to get the Partey deal over with.

People find that sort of chat – like the truth – ‘boring.’

Stan can no wrong, apparently. The 8th place trophy is the all new ultimate in cool.

We need 4 strikers like all top clubs, auba +laca first choice with martenilli+nkeith back up 👍

Should sell Auba. Seriously one summer left he will go on a free otherwise, contract pen to paper may loom large now and drag.

Why should he sign? He can go for free next summer with lure of certain clubs.

Now we’ve unsettled Laca somewhat with trying to sell him before we could confirm on Auba.

Auba is about to sign a three-year deal. Do you not read the news or listen to anything Arteta says?

Con’s post above about selling Lacazette was already daft enough to become a candidate for ‘The most Ridiculous Post on Arseblog in The Entire History of the Universe’, but fear not – this one is now romping home.

You and Con should team up and do a radio show. TalkSport would be blown off the airwaves.

Sorry, but we absolutely need to replace Laca. He was appalling for most of last year. He doesn’t have the athleticism needed to play the role we need.

Sell this dude at your peril, Arsenal.

He is vital – and I mean vital – to our chances this season. Auba cannot do it all by himself, Eddie and Nelson are still a work in progress and the midfield still have a significant contribution (goal-wise) to find/rediscover.

Ok, I get that every player has his price, etc – so if someone wants him that desperately, they can fucking cough up. Anything less than £50m would be daylight robbery in this market. In fact, I’d put £60m on him.

continuity in partnership with Auba will be important. I think weakening strike options to strengthen midfield is not a great choice.