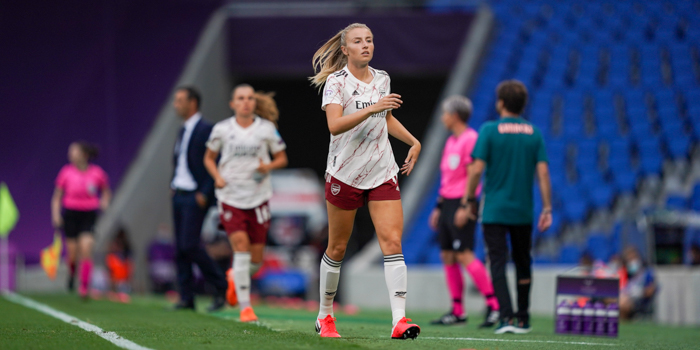 Arsenal manager Joe Montemurro confirmed that he expects defender Leah Williamson to be fit for Saturday’s FA Cup quarter-final against Sp*rs on Saturday evening. Leah was withdrawn from England’s intra-squad friendlies earlier this week with a cryptic tweet from the England Lionesses account [since deleted] that suggested she had been pulled out as “a precaution” and that they “could not say any more at this time.”

Arseblog News asked Joe Montemurro whether Leah would be fit for the match on Saturday evening. “Leah was just a precaution and she will be alright for Saturday’s game, we’re expecting her in training on Friday and ready to go.”

Jill Roord scored the winner for Netherlands against Russia on Friday but was taken off with a slight knee injury in the second half. Roord told Dutch TV after the game that she felt “fine” and Joe says he is still waiting for further information on the length of her absence. “We are still waiting on confirmation on exactly what has happened and we can let you know as soon as we know, we are just waiting on the medics to get back to us.”

Goalkeeper Lydia Williams [ankle] and Jen Beattie [back] missed the first two games of the season but the prognosis is positive on both. “Lydia Williams is on the park now and working well, in the next ten days or so we should have more information to give you. Jen is doing very, very well, she hasn’t had any reaction to her back issues so we expect her back in full training over the next three or four days.”

I also asked Joe about the signing of Lotte Wubben Moy and that story will be available later tonight on Arseblog News.

I have a huge crush on her ever since i saw her in our new jersey unveiling. She has to be the most beautiful arsenal player in squad.

Jordan Nobbs would like to have a little conversation with you…

Men will be men

A Jill Roord injury would be very upsetting. Has performed so well in September. Hope we don’t collect injuries like the last few seasons, though we have a broader squad. Will be really interesting how rotation will look like now. Up The Arsenal!

Does this count as the NLD? No competition for the Gunne
rs at all! COYG.

Salibaba and the Forty Thieves
Reply to  Hedgehog

A derby is a derby even if the opponent are fielding a team of geriatrics.

Let’s hope Jill’s injury isn’t one of those “little niggles” that becomes a “big niggle”. She has been sensational in the first two games. I for one, was surprised that she was in the Reading game starting eleven.

It might be weeks but it won’t be months

Is this game going to be on the FA Player? Sportsnet in Canada doesn’t seem to be carrying any Womens FA Cup games this weekend.

Such a relief! leah is one of our few players who will understand that beating spxrs is not just about football, we know that american tea drinking woman takes no prisoners so we really need to be up for this one. From the men’s game we know what those twats are like when they get one over us! Go Leah!

Leah is a great player and could play in most positions because of her ability to read the game.