THE LOWDOWN
Having opened the season with a resounding 6-1 victory over Reading last weekend, Joe Montemurro’s Arsenal side will look to continue in the same vein at West Ham United this weekend. It’s the first game at West Ham’s new Victoria Road home, shared with Dagenham & Redbridge and also one of the UK government’s approved pilot matches for the return of spectators.

1,000 West Ham season-ticket holders will be allowed into the stadium on Saturday evening. It will be the first time that Arsenal have played in front of a crowd since February 29th. For Arsenal, the message is clear, however, they want to block the noise out. All summer, the talk has been of new additions at Chelsea and the two Manchester clubs, with Arsenal’s title prospects either dismissed or ignored despite adding four internationals to their ranks this summer.

? "I'm happy because people always say you can't score from outside the box… but that box is ticked for this year now!"

Joe Montemurro has consistently suggested he and his team are happy for others to have the spotlight. Asked whether the 6-1 victory over Reading on the opening day was “a statement of intent” in his post-match press conference, Joe played the question with a straight bat. “We leave statements to journalists and pundits, we just want to win matches.”

The coach has much more choice in his selection than he is accustomed to- last weekend there was no room in the starting line-up for Caitlin Foord, Danielle van de Donk and Lisa Evans while Katie McCabe was suspended. Montemurro is likely to shuffle his pack again having adopted a 3241 formation against Reading last weekend.

TEAM NEWS
Jen Beattie is still absent with a lower back injury, while Lydia Williams won’t return to training until the end of the month due to an ankle problem. Katie McCabe returns from a one-match suspension that kept her out of the Reading match. New signing Lotte Wubben Moy has only just finished quarantining upon her return from North Carolina and is unlikely to be available.

LAST TIME OUT
Goals from Katie McCabe and Lia Walti gave Arsenal a 2-0 FA Cup win away at West Ham back in January. The last time they met in the WSL was the opening day of the 2019-20 season, when Beth Mead and Jill Roord were on the mark in a 2-1 victory at Meadow Park.

PLAYER TO WATCH
Jill Roord began her season in the best possible way with a hat-trick against Reading and it will be difficult to omit her from the starting line-up again on that basis. I asked Joe Montemurro what he expected from the 23-year old Dutch midfielder this season and his answer was very revealing. “The big thing we are looking for from Jill is to find that level and maintain it.

“She can float in and out of games sometimes and become complacent because she is so talented. I’ve given her that challenge this year to make a 7.5 or 8 out of 10 as her base and everything else above that is a bonus, she has understood that challenge and hopefully we’ll see more of what we saw today throughout the season.” The message for Roord is clear- go and repeat last week’s performance.

THE OPPOSITION
Matt Beard’s West Ham opened the season with a 1-1 draw against Spurs at the Hive last weekend. The squad has experienced enormous churn over the last two seasons with a host of players arriving and departing the club, the lack of continuity contributed to a disappointing league finish of 8th last season and after an 8-0 hammering at Chelsea in February, coach Matt Beard questioned his position at the club.

The Irons did convince highly rated Swiss forward Alisha Lehmann to sign a new contract this summer and have also attracted Rachel Daly on loan from Houston Dash until December 31st. They will be without striker Martha Thomas and France international Hawa Cissoko for the visit of Arsenal on Saturday in their first game at their new Victoria Road home.

Pick that one out! ? 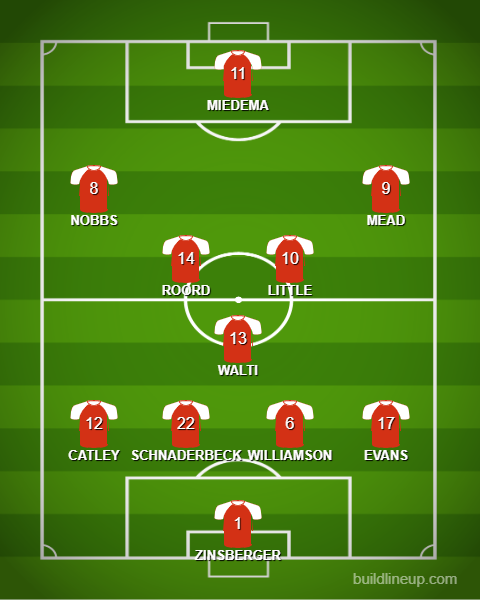 COMING UP
We will have reaction from manager Joe Montemurro on the site at around 9pm on Saturday evening. We also have an interview with Leah Williamson on the site at 10pm the evening before this game.