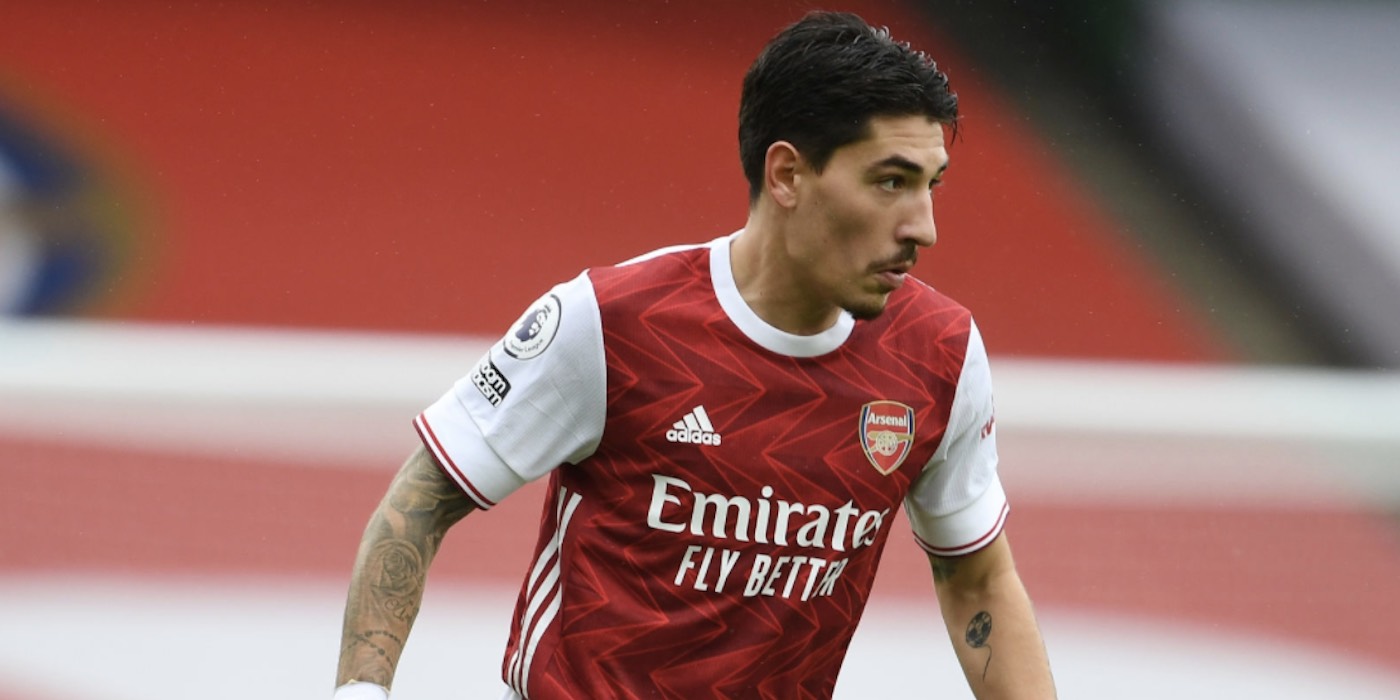 I wake up pretty early to watch these matches, today was one where I had wished that I had slept a little longer because the first half of this match was nearly enough to put me back to sleep. I am also writing this after Liverpool have conceded seven goals, coming right after Manchester United allowing six, so maybe a little boredem isn’t the worst thing in the world.

Thankfully for Arsenal’s chances of winning, Mikel Arteta made some proactive changes that paid off with two goals and we head into the end of the trasfer windown and the international break with a win and in the top four.

Arsenal 2 – 1 Sheffield United: By the graphs 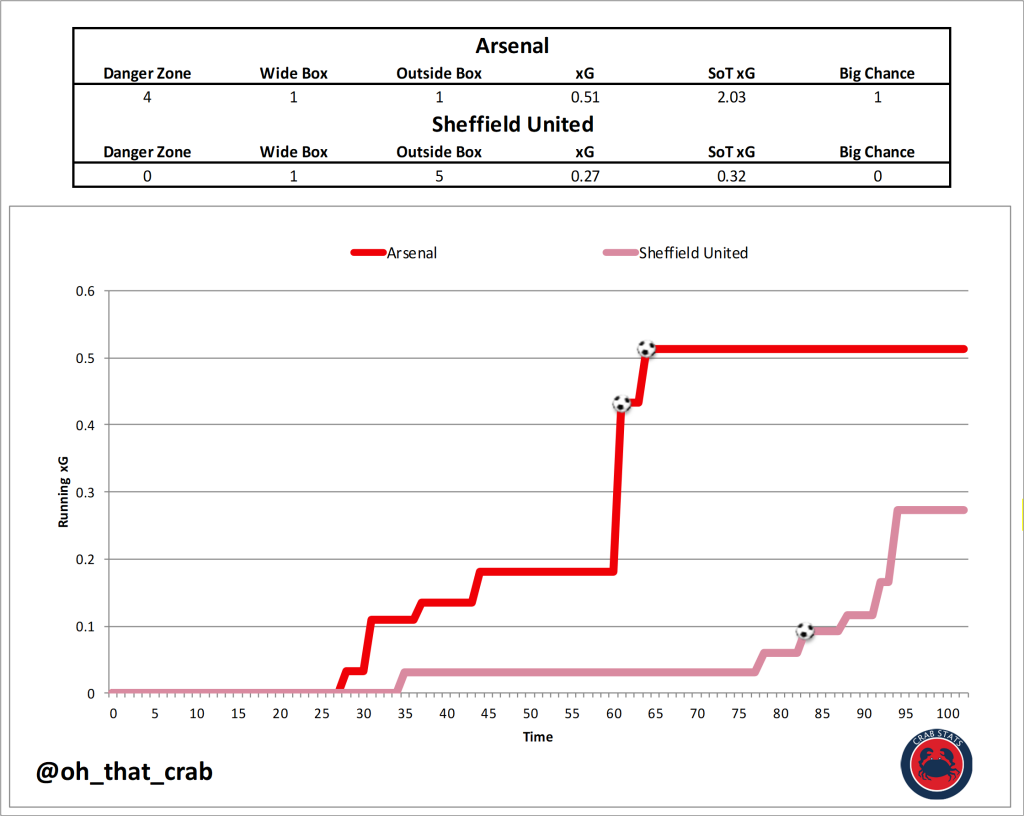 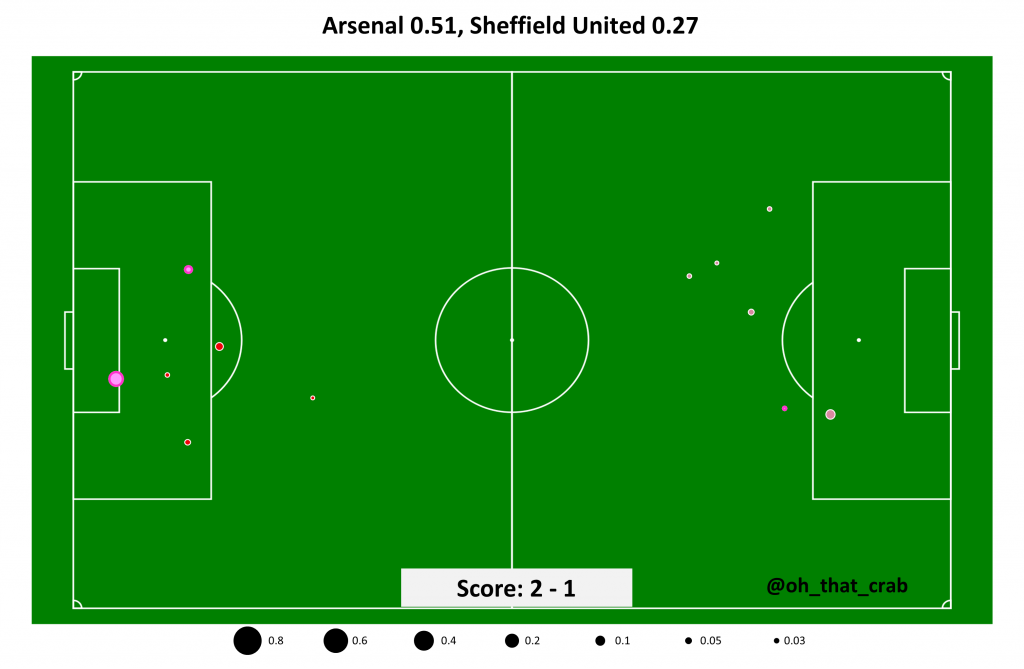 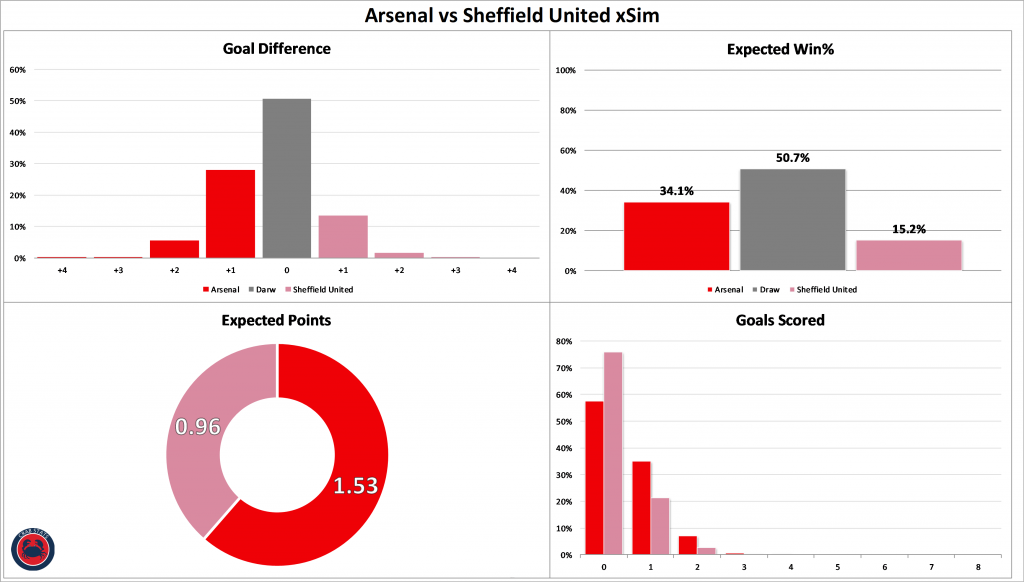 Sheffield United last season were surprisingly (to me atleast) active pressing their opponents in the final third with nearly 43 per match. Arsenal have gotten much better at handling being pressed under Mikel Arteta and in this match it looked to be more of the same.

I was honestly shocked to see the StatsBomb pressure numbers this morning showing that the pressured Arsenal 51 times in Arsenal’s defensive third in this match. From what I remembered, they came out farily agressive early on in the first 15 minutes or so but Arsenal handled things well and looked dangerous. After that Sheffield United dropped back into their deep block and looked to frustrate Arsenal. I don’t know the timing of the pressure events but maybe it picked back up after Arsenal got the second goal. I think this is one of the reasons that numbers are better than simply memories of matches.

6 – Shots for Arsneal against Sheffield United, bringing the season average down from 8 per match to 7

0.09 – Expected goals per shot against Sheffield United, bringing down the season average from 0.18 to 0.16

There are a lot of the same complaints that have been common this season about this match but with some new twists.

Arsenal didn’t create many shots, but did have a few nearly moments that would have been pretty clear chances had they turned into shots. The shots that Arsenal did have were relativley tame as well (again that doesn’t capture chances that didn’t turn into a shot) with just one clear cut scoring chance.

Arsenal had a lot of the ball, I had them in control of the possession for 66% of the match but unlike other matches this season where they dominated possession they couldn’t generate threatening possession. The touches within 25 yards of goal were actually in favor of the Blades who had 24 to Arsenal’s 21.

What is interesting, and makes me hopeful is that the introduction of Nicolas Pepe at the 58th minute created an almost instant impact to Arsenal’s ability to attack. Between his introduction and the second goal (6 minutes) Arsenal had 6 of their 21 deep touches, 2 shots and 2 goals. After that Arsenal didn’t have quite the same desire to attack but hopefully that is a good sign of how Arsenal can create more going forward.

Hector Bellerin looks back to his best

When Hecotr Bellerin was included in transfer rumors I was worried, he didn’t look great at time last season but knee injuries can be more like 18 month injuries to get back to a players best. There were signs of things starting to improve at the restart and while Ainsley Maitland-Niles had filled in admirably, he hasn’t shown the same ability to pass the ball at the same level as Bellerin.

This season, Bellerin looks like he is really regaining his form that made him one of the best right backs in the Premier League and I am very glad that he will continue to be an Arsenal player.

Sources: Opta via Whoscored, StatsZone and my own database. StatsBomb via FBRef.

Thomas Partey: By the numbers

What I love about this performance was how little we gave them in terms of decent chances. While Tierney/Luiz could’ve closed down McGoldrick goal it was still a bit of a freak occurence that everyone now & then will happen.

In the Emery era we were so porous and it felt like teams were getting endless opportunities.

It’s not pretty, yet, but the progress is clear.

There’s so much covid out there now – we have to cancel the rest of the season and use the current table to relegate and promote.

“Knee injuries can be more like 18 month injuries to get back to a player’s best.” This is very important, and often ignored by fans and pundits. We should keep it mind when it comes to other players as well, like Holding, Chambers, and Martinelli. I hope that this spring and summer we aren’t going to see fans going off on how Martinelli is a bust who just had a lucky fluky year last year. He’s going to need a lot of time to get back to his best, even when he is back in full training and playing matches.… Read more »

Couldn’t say that any better.

I’m ready to be patient with Nelli. Dude would be a world beater.