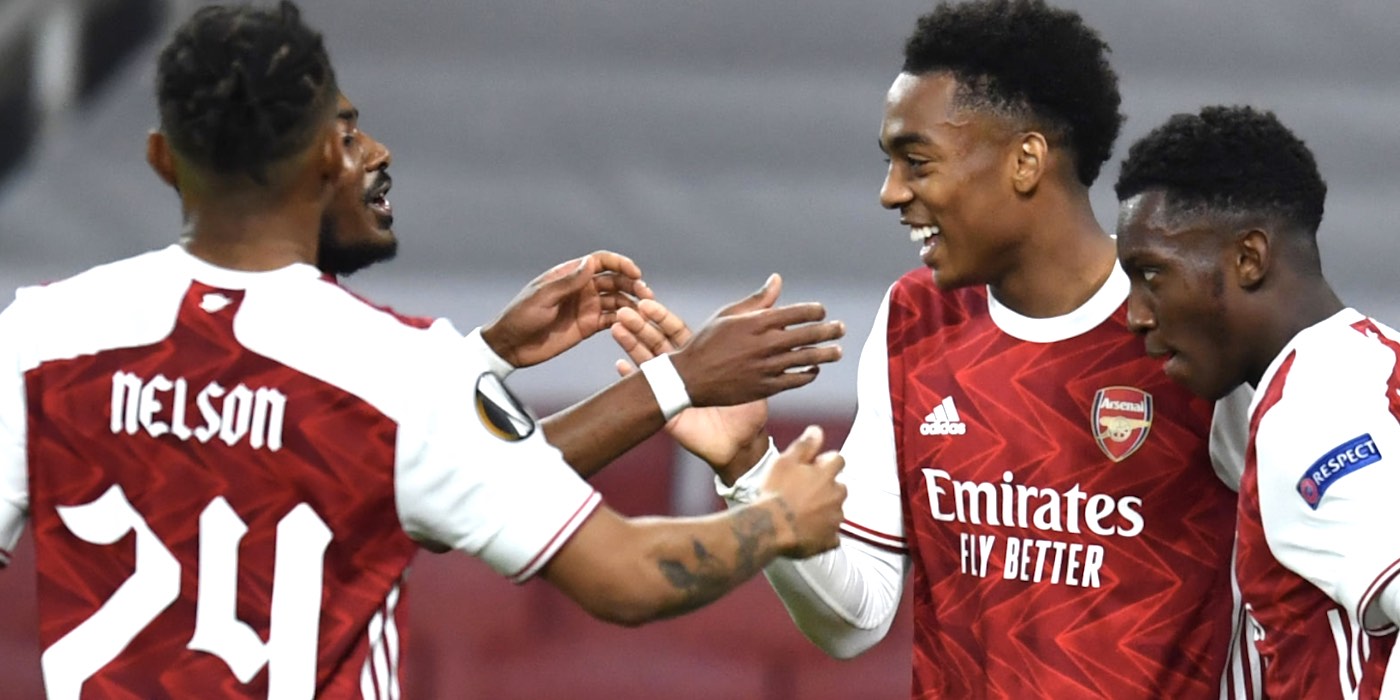 Arsenal made it two wins out of two in the Europa League this season with a 3-0 win over Dundalk.

Eddie Nketiah and Joe Willock netted late in the first half, before Nicolas Pepe’s early second half strike ended the scoring for the night.

It was a game Arsenal were expected to win, and did so. For most of the senior players this was absolutely routine, but one or two of the younger heads stood out.

The ratings are hidden by default until you vote, but if you just want to view the ratings and the comments, flick the switch at the top above Alex Runarsson. Also, please give the ratings a few seconds to load.

Arteta: Willock will be an Arsenal player next season

That fouls stat is truly hilarious. Talk about the opposite of getting calls at home

I couldn’t have been more disappointed with the ref. Had a real shocker.

see that shirt grab outside the box by their defender, which resulted in elneny being judged to have committed the foul…?

Yes the referee was quite meh

Wait. What? No… That stat can’t be right, can it?
How did Dundalk not commit a single foul???

Yeah, it didn’t really matter, perhaps he was trying to be a little lenient towards the minnows, which I wouldn’t have too much trouble with. But this was pretty excessive. At least call that blatant shirt pull at the end as a foul outside the box.

As if he was reffing an under 10s game and trying to keep it even.

Classic English football refereeing. It’s all about creating an exciting match for the neutrals. If one team is better at football than the other, just let them kick the opposition and don’t give fouls. It’s like playing Stoke again.

Except the ref was Slovenian… errrm!

And the game was played in Eire.

Other than that, you’re spot on.

I know the opposition perhaps wasn’t the best but I liked how Arteta changed formation and really tried to build triangles and create action around and in front of the box. Call me optimistic but this was definitely a step in the right direction.

Admittedly I couldn’t watch the whole game, but I got the impression that there wasn’t much combination and team play. We won because our players are just better individually, and individual brilliance got us the goals. There wasn’t any assist to speak of, even if they were given.

I understand this combination of players do not get much game time, so maybe that explains it… Still, for me it was slightly worrying.

Willock is the only midfielder we have that dribbles forward. I thought Ceballos would do more of that more generally but that’s obviously not his game. I like seeing Willock do it though, reminds me of what Ramsey used to do

Ramsey and dribbling, which Ramsey are we talking here?

Ok, I am convinced..

Despite being used as a winger more often, Ramsey has averaged more successful dribbles in almost every season vs Ox. Routinely about 50% more per match.

I think you meant Oxlade Chamberlain

And by Ox you mean Gibbs?? Sorry I had to
I’ll show myself out

I’m not mad at this

I think the players do what they are told. If the boss says less dribbling to someone like Ceballos, my guess is that’s what he is going to do. Against opposition like tonight, they are more likely to be allowed some freedom. Who knows!

Then he should tell that to Pepe lol

Watching Nelson and Wilock have fun was beautiful. I feel like it’s been a while since we saw Arsenal players out there enjoying themselves like that.

Willock was the most Ramsey-esque as we’ve seen him! Although he lacks some of his mercurial talent, he can become such an impactful conduit for creative movement and passing in Artetas systems.

There’s no such thing as talent. Only hard work.

Yep – Pepe’s split-second drag-over and smash-curl into the top corner off his wrong foot was just hard work.

And Dolly Parton doesn’t sleep on her back…

Dundalk after the first team in UEFA Cup not to commit any fouls in the 90 min! What a stat to remember! Fair play to them they made it difficult in the first half!

I think the rehadfabet on it! (just joking, but I think he got to the stage of wanting it to happen)

A bit harsh may be but time to cash in on Eddie I think. Bring Balogun in, let’s see what he’s about. Over the past year, Eddie hasn’t shown much imo. He’s good at tap ins and works hard, other then that, very limited player. Can’t create for himself or others, hasn’t got ability to go past defenders or hold up the ball to bring team mates in. Not particularly fast or strong. Doesn’t seem to have a high ceiling.

Yet he’s England U21 all time top scorer. He’s still very young. He might not be world class but he’s a decent option up front. At the moment I would rather see him there than Lacazette who just looks old and knackered.
I’d also like to see a bit more of Balogun though, to see how he lives up to the hype.

Defs an enigma – you don’t top Shearer and co’s stats (even u21) without having summat about you. But it ain’t showing in the Prem… yet.

Yes, I’m still waiting to see anything from Eddie that convinces me. Not sure I’ve seen him score anything that isn’t pure poaching, and while that instinct is important we need him to be more rounded. I feel sad we’re getting further and further from the slick one touch teams Wenger produced

If thats the case, then Auba would be the worst forward ever….

Yup, they should be judged on successful tackles

Michael Owen made a career out of it!

I’m so torn about him. Hes obviously going to score goals…what more do you want? But I agree regarding his limitations. They look many.

Van Nistelrooy was a poacher. I hardly ever saw him score goals that were not tap ins. The greatest attribute of a striker is to be in the right place at the right time.

Van Nistelroy was a poacher, Inzaghi was a poacher. Players like Nketia only need creative midfielders and wingers to supply the ball and they will finish it, even Auba is a little bit similar, he is not a dribbler neither can he hold on to the ball he only has pace and finishing.

Eddie currently still misses way too many of the chances that are set up for him. We need to be realistic here.

Wait what? Eddie has been pretty good this year. His 3 worst performance were the two games where he was put in the LW and the red card last season. I think he offers much more than Lacazette in the front. If anything Laca needs to be sold while he holds some value. Let Balogun play some matches before deciding he is ready for first team.

Who wants to buy a Pepe

I think Reece had a much better game than Pepe, and he deserved a goal. Pepe had trouble beating his man (probably a farmer) time and time again whereas Reece was torching defenders. Last ball could be better but a run in the team could help improve that. Really makes me wonder why they spent 72million on a player that isn’t a whole lot better than Nelson

Jack
Reply to  Who wants to buy a Pepe

Karen Carney, is that you?

goonshow
Reply to  Who wants to buy a Pepe

So you’d prefer a player who can dribble anyone but doesn’t finish, to one who buries it?

‘Last ball could be better’… the last ball is all that matters in football mate!

Anyone(!!!) Who has ever disagreed to the FACT that officials have an inbred dislike/bias of, and against, Arsenal… tonight put paid to any questions. Disgraceful officiating.

Perhaps Ozil could finance them and a dinasaur?

Salibaba and the Forty Thieves
Reply to  Mark

I read that the prize money for a top place finish in their league is about €150000. That’s insane given our players salaries. I’m sure this Europa League run will provide a good windfall for Dundalk

Runarsson and Balogun are invincibles.

Elneny just quietly ticking along as if he hasn’t been our best midfielder so far…Which is scary but great for him.

goonshow
Reply to  The Arsenal

Should got 8 – but Blogs (I fear) has a bit of a thing about Mo’Nenny. The fella has not put a foot wrong since getting back into the team. Quick (at least 3x quicker than Granite!), really solid and can pick the odd killer through ball.
What’s not to like? This hang-over prejudice towards players who’ve had bad runs but have clearly turned a huge corner, is just sad!

NMArsenal
Reply to  The Arsenal

Elneny is probably the cleanest passer between all the other Arsenal MF. His passing quality is even better than Cabellos. Yes, he does mostly sideways and back but when others failed to even to that then it becomes a big problem for the team. When he can he does produce a few a good front passes like the Ozilesque release of Bellarin last europa game.

I’m not sure, am I crazy but did Pepe not score the goal with his right foot? Has no one noticed that? Is no one else shocked and appalled, yet strangely happy about this? Or does he use his right a lot and I’m crazy?

I wasn’t sure he could actually kick with the right. Quite the shocking development.

AMN to that brother
Reply to  Billy

I saw that too.. has an eye for the spectacular

Yeah when I watched the game I immediately had the same thought. I was all like, ZOMG he struck that superbly with his right but the commentators didn’t say boo about it.

Wasnt like it was a scuff shot either. It was a well worked and beautifully styled finish!

I think he used it a few times, mainly due to swapping sides with Nelson after which they both looked better.

I sense some disconnect between Eddie and Pepe.

Unfortunately – Eddie seems disconnected from most of the team ito link-up play. Yes, he’s a poacher but not at the cost of setting team mates and/or anticipating their next pass to him.
Some work to do yet for the lad…

soares has no face which is terrifying

Maybe he’s a close relative of the headless horseman? I’ll grab my coat.

The Ref had a flawless performance

I wasn’t aware that teams were allowed 12 players on the pitch in Europa league? Wonder why Mik only used 11 of ours….

This match reminded me of many of those old cup matches under Wenger when our youth would have the opportunity to shine which has gone missing some in the last few years with more reliance on senior players of late in those matches. The big difference though with this group is they are all first team players that showed they are ready to contribute when called upon. All have had chances here and there and hopefully will get some more consistent playing time in place of more senior players that are underperforming such as Lacazette.

From the highlights I saw, Nketiah missed one, scored one, and didn’t quite reach one, but what those incidents all had in common is that he looks like a genuine goal poacher.