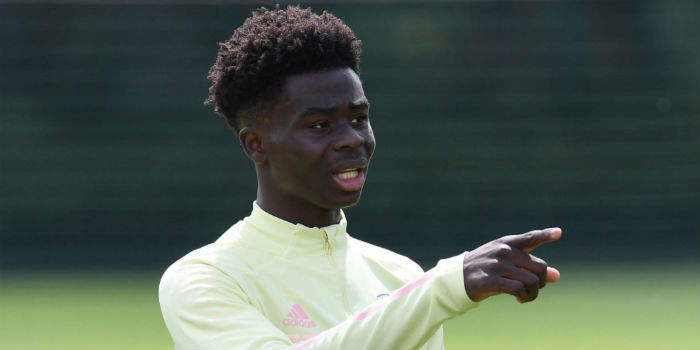 Mikel Arteta says Bukayo Saka is “an incredible” talent and deserves his chance to shine on the international stage.

The 18-year-old received his first call-up to the England senior squad from Gareth Southgate yesterday ahead of a trio of Interlull games in October.

Also eligible to represent Nigeria, Saka has featured regularly for England at youth level but only made his under-21s debut in September.

His progress has been swift but the boss has backed his new number 7 to keep on delivering the goods.

“I’m extremely happy with him – he totally deserves that chance,” said Arteta after last night’s Carabao Cup win over Liverpool.

“He works really hard and he has an incredible talent. It’s a combination of everything you need to be successful and I think that call-up is going to fill him with confidence even more, and I’m really happy for him.

“That ability, versatility and unpredictability that he gives to the team is special. As well, the way he reads the different situations in areas that we want to provoke during games and then also the personality that he plays with.

“He comes here to Anfield and he wants every ball, he works for every challenge and I think he put in a really good performance today.”

England play Wales in a friendly on 8 October before facing Denmark and Belgium in the Nations League. All three games are set to be played at Wembley.

Is he going to ditch Nigeria forum England? That will be a big mistake from his part. With Nigeria, his world cup chances is sure(bar injury), his chanced of winning national trophies is sure.

But if he prefers England, then Goodluck to him except when the super eagles of Nigeria play them.

God, nigeria has to be really over-rated.England are shite at international stage but they have a good team, atleast better than nigeria.

The latter stages of the World Cup are about as much as I can take of international football. It is generally poor quality and my only real interest is that Arsenal players don’t get compromised.

Yes, better than Nigeria because the English press always overate the anything English products. Beckham was so overated that the English press almost compared him to with great 7s ever, thought he is in the league of Ronaldo (Brazil), zidane, figo while he actually all know that that is not true.

When was the last time the English national team won an international trophy?

Yes, the Nigeria national teams is so overated but they have more trophies at any level than their English counterpart.

P.s. more thumbdowns are expected anyways, I don’t give a damn

Am Nigerian, but I’d rather not have him shuttling between continents in between important PL (and hopefully CL) games.

That is a lame excuse, Mr ArsenesLongSufferingZipper. Is he the first player or will he be the last between continents? Presently, there are hundreds who do that in the premier league alone(some even go as far as south America, north America, Oceania).

So what’s the big deal in that. Please, don’t let us what is not a big deal a big deal

I feel your pain, Gbenga. I just feel that the Nigerian National Team has such a wide pool of talented players all over the world at it’s disposal. Arsenal, at this time, well, not so much.
And, I wasn’t aware that there’s anything in “ArsenesLongSufferingZipper” that gives away my gender. Safer to simply dispense with the titles, don’tyou think?. Naija 4 Life!!!

What pain? I can’t remember saying “am pain for that”. I only voice my opinion. At least, at the end of my post, I said I wish him good luck. There have been many Nigerians who ditch Nigeria for other countries like Emmanuel Olisadebe(Poland), Dele Ali, Tomori, Tammy Abraham, Agbonlahor, Nedum Onuoha(England), David Alaba(although, Nigeria ignorantly lose him to Austra, when he volunterily made himself available for Nigeria), and there are many who chose Nigeria ahead of other countries like Alex Iwobi, Ola Sina, Brown Idowu, Osaze Odewingie, Shola Ameobi, Leon Balogun, Troost Eking etc. With or without them, we… Read more »

Playing for England, he has to earn it . If he hits Steady KDB levels , no one in any team will keep that out of anywhere. Balls in his court

He was born in England, raised in England, played and trained by English academies ….. he’s not “ditching”

I wish he would back Saka for more regular starts in the league. The lack of creativity is startling, even against smaller teams and Saka is one of the few that make a difference.

Didn’t create much last night. (Although I don’t put the blame on him for that; there’s a common theme developing but it’s unfashionable to talk about it)

Let’s keep in mind our last two matches have been away at Anfield. Not too many clubs get a chance to create a ton against Liverpool at home right now. And we had clear dangerous periods in regular time of this match, just lacked the final ball and finishing.

It’s a no brainer for Southgate, he’s the most versatile player in the squad and crucially is left footed. Happy for him and AMN, good luck to them and hopefully our other youngsters can follow in their footsteps.

@arseblog, is there no way for us to edit our messages? There are errors I wish to correct in my messages. There are tons of WP themes out there that offers such functionalities (I can really sniff WP in the whole site structure…saying this as a programmer not as an hacker)

In a way not being able to edit is a good thing. Keeps us honest and makes us think about what we’re saying before we blast it out.

As a Nigerian, it’s disappointing, but understandable

Like his attitude. Very pleasing player but we need to get him up the pitch higher as a winger. The sooner we can go out of back 3 and into back 4 with an added player up top the better. In which case Saka will be option to Auba. As for Aouar, its all looking a bit pear shape. I mentioned that we needed to bite early before CL teams come in and Lyon tire of us. We still have a slim chance if we table sufficient. The problem is Arteta and Edu are trying to be clever banking on… Read more »