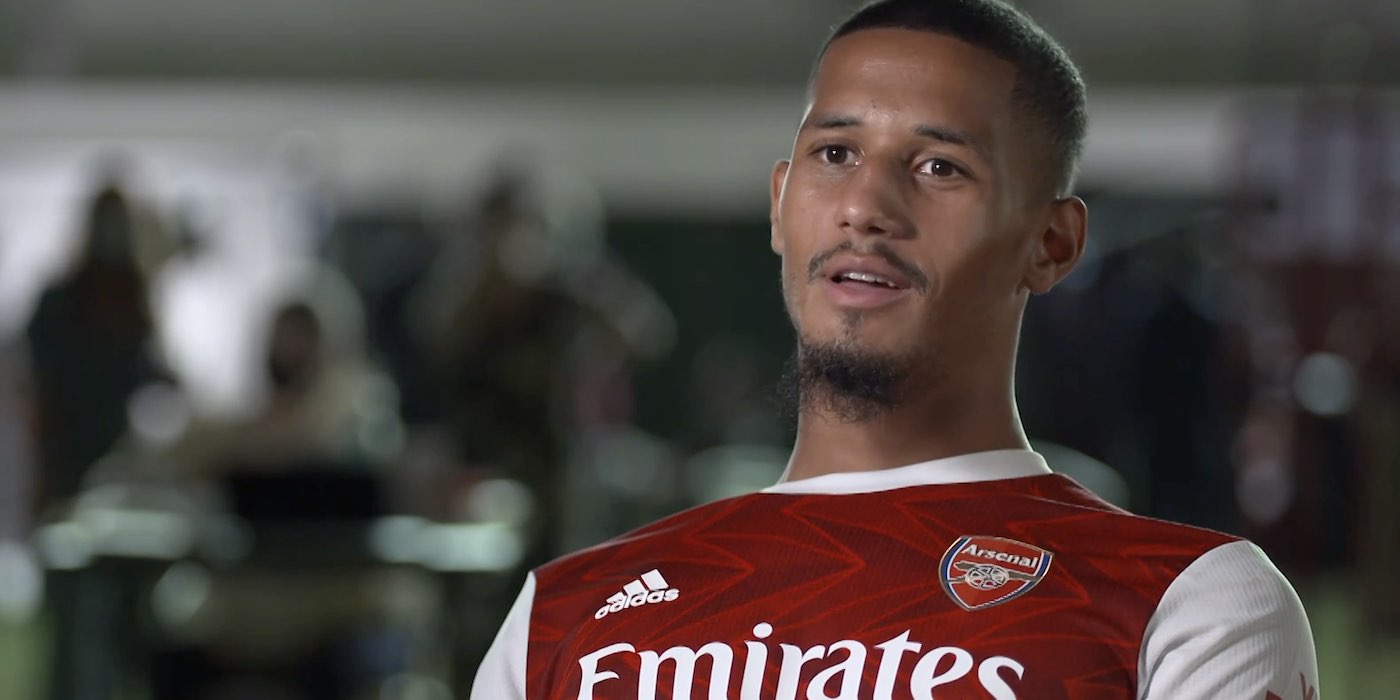 As Arsenal took on Liverpool last night in the Carabao Cup, there was no place in the team or indeed the squad for William Saliba.

The 19 year old has yet to make his competitive debut for the club, having arrived after a disrupted year on loan with his former club Saint-Etienne. It is this disruption, among other things, that has seen Mikel Arteta take a very cautious approach about his integration.

Speaking afterwards about his absence, the Arsenal manager was sanguine, saying, “He had a year last year where Arsenal loaned him to St Etienne and that was a transition year for him.

“For many reasons, that wasn’t the transition year that he needed because he had a lot of injuries, some personal issues and also with COVID-19 and the French league getting cancelled, he didn’t have that year.

“He needs that year of transition and we are trying to make the right decisions for him to give him the best transitional year for him to have the player we want in our future.”

It remains to be seen exactly what that means. It could suggest a loan, it could mean he needs more time to settle in and more coaching before he’s considered ready.

What is clear though is that we need to remember he’s just 19, still extremely raw in the life of a centre-half, and what he does at this age won’t define who he is at Arsenal Football Club.

At the same age, new signing Gabriel was being shipped off on loan from Lille to Troyes and then Dinamo Zagreb. Few central defenders are ready for the cut and thrust of the Premier League at 19, so give the lad some time.

Well he is just fine on my FIFA team, I don’t get all the caution…

He’ll get game time in europa is my guess .. We are getting tougher draws than we would have liked to experiment in the league cup

Call me crazy but I think I am going to trust the manager, who sees him every day in training, on when Saliba is ready to play.

The manager was already talking like that before he came this season. It does seem to be about performance during training.

Next season with no Mustafi, Luiz, Sokratis he will be the main stay in defence.

I think Chambers is on the offload list, isn’t he. Nobody appears to be much interested though.

He Tore his ACL, tbf would you sign him before he’s even played a game after that injury? It would be smart to give him a loan spell in January to get him back on his feet, potentially generate some form and confidence to compete for his spot again at arsenal or some more value for a transfer. I doubt he’ll be sold now.

I love Chambers , calm baller (Calmer than AMN even , no cap) but Fulham know him and in the little I’ve seen they’re overrun in midfield. They’re begging for a brand new Scott Parker. If I were Chamber’s I’d give this Legacy some thought .

When Chambers joined the club he was performing like Gabriel bad been doing and was loaned later.

This defence line-up is surprisingly solid and I am willing to wait for next season.
Interestingly, all of them are at an age they can still improve!
Whatever we achieve this season is a bonus for me.
I think we will begin to see the real team created in Arteta’s image then.

Disagree with bonus year. Emery was told top four was the objective his second season. The difference is that Arteta looks like he will achieve it.

Sounds to me like he is going on loan or will play more for the U-23 team.We have Luiz, Gabriel, Holding and Mari ahead of him in the pecking order and this is how it is at this point.

Holding is poor who saw that air shot last night when he tried to make a clearance towards the end of the game.
He doesnt get grief as hes english but hes not vey good at all

He needs to work hard in training, that’s the key…

The key is 19. He’s just 19 but agree with the hard work in training

I think a lot of fans are forgetting that he’s still just returned from injuries, and needs to be managed very carefully. We don’t want what happened to Tierney to happen to him. His situation warrants a lot of caution.

I agree with Arteta. At 19 years old, Saliba needs to be brought along gently. However, Arsenal should still go after Upamecano. Forget about Aouar for now. Get the central defenders and defensive midfield positions right. Upamecano can be the final addition to sort the defense for the next decade. And Partey can be the beginning of sorting the midfield.

As good as a signing Upamenco would be one thing we do not need is another central defender to add to the 8 we already have. We have signed Mari, Saliba and Gabriel already this season. Midfield is where we need to strengthen.

We do not need new CBs, especially if we have to miss out on the position we actually need to strengthen.

Well, we may have to forget Auoar – or any other midfield option – unless we actually sell someone pretty quickly to help raise the funds to buy them.

In terms of priorities though, and against a background of scarce resources, I think a midfielder (Aouar is probably first choice now) is top of the list. You’re right in suggesting that successful teams are built on a solid defence, but I strongly doubt we will strengthen both positions in this window.

If this is our midfield then there is no way we’re making top 4 – unless willock make a huge jump (technical and end product improvement) and reaches his potential in the next few months. Because he is the only player we have in midfield with the upside to lift our midfield out of its mediocrity. Its long odds though. More likely that takes a year or two more (if he gets there he’ll be a special player).

Young players have to be developed carefully or for a number of reasons they don’t reach their potential. We’ve experience of this, unfortunately, with Chambers for example. A very expensive teenager (for the time) who, frankly, has been a big disappointment overall. Yes, he’s had some better games but he’s not where he should be at his age now. It looks like Arteta will offload him if he can.We don’t want a repeat.

Bit rough on Chambers. He was having a really strong season last year (at CB and suprisingly at RB too) before his ACL tear. I think he is quite a good player and has developed well – versatile too (RB and DM). He is 25, which is still only really just now the time CB really hit their peaks. Similar to Holding, another player that was really starting to kick on then ACL. Both are good players. We definitely have to hope they continue to improve more, but nothing indicates they can’t. In 2-3 years if our CB quintet is… Read more »

If he doesn’t play much this season, that is 2 years of his contract wound down already. By the time we start to depend on his, there will be the usual contract nonsense coming up, which Arsenal are not good at dealing with.

Loan this player to english team ….. Like fulham … We see how he performs