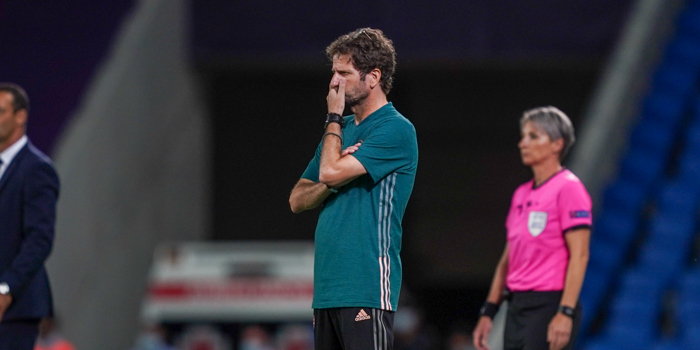 Arsenal boss Joe Montemurro says that the club are conducting a “massive internal review” into their injury situation which currently sees seven first team stars sidelined with injury issues. Injuries have dogged the club for the last two seasons now but, in the past, the injuries have largely been big impact injuries forcing players into extended absences.

This season, Arsenal currently have Jordan Nobbs, Kim Little, Steph Catley and Lisa Evans nursing muscle injuries, while Jen Beattie also missed part of the season with a calf problem. Joe Montemurro admits this is a concern and the club are examining their internal processes. “As much as you hate asking about injuries Tim, I hate answering because I feel like I am making excuses! Each injury has its own story but you will be excited to know that there is a massive, massive amount of internal review that we are doing because it’s something that has crept up on us in an area where we felt we were very, very strong.

“We do a lot of individual strength testing and to know where their deficiencies are, whether they have calf problems. This season, for some reason, it has reared its head.” Montemurro feels there are an accumulation of factors which could explain the sudden uptick of muscle injuries. “Is it load management? Possibly. Is it the accumulation of games? Possibly. Is it the long pause of games and now, suddenly, there are lots of games and there is the stress of real-game situations as opposed to training at home alone? Possibly.

“I’m looking at every exercise we do in training, I am looking at my session planning, we are looking at our rehab processes. We’re trying to work out where and how and why this has happened. We need to be better at understanding all of this. There is no finger pointing here, this is about us coming together as a group, as a wider Arsenal and also how we work with individuals on a specific basis and looking at how we can get better results.”

Our medical team have provided the latest on seven of our stars ?

The Gunners boss also thinks the unusual pre-season, which saw Arsenal return after four months of individual training before going into a Champions League quarter-final might have taken a toll. “The pre-season was different, definitely, has there been an impact because there was an immediate accumulation of games? Possibly, yes. We need to look at it and be better because it’s an area where we are a little bit concerned.”

Thanks Tim for the info. Yesterdays injury update was really depressing and unbelievable even for Arsenal, although we are supposed to be used to having players missing. I am afraid that it might get worse before it gets better, because we at moment have no choice than to overplay our remaining fit players. If we can get Kim back, we have maybe one attacking sub/rotation option for coming games and all our fit players will have international games also. November schedule is really harsh and if we did have problems with preparation for the season, remaining ones aren’t immune to… Read more »

Looks like I jumped the gun with my comment regarding why we focus so much on match statistics and not research the plethora of injuries, not just now but every season in recent times. I shall not repeat it here as it is in the previous post if anyone wants to read it. However, there must be a fundemental difference between what we are doing, or expect our players to do, and other clubs because their WSL teams play as many matches, internationals included, in similar timescales and yet only appear to have a fraction of the injuries that we… Read more »

I get your frustration and I hope they figure something out, but this year it is probably different than last two. Previously we didn’t have enough players (couple who were very injury prone) so we had to overplay rest of them, and the kneeinjury plague from 2018/2019 was just so unlucky.. Like Tim said we didn’t have many muscle injuries. If someone breaks you, there is little that can be done about that. Now it seems something has gone horribly wrong with the preseason or buildup, because we are only beginning of the season, we can’t have overplayed them. Only… Read more »

I really like the attitude, hopefully this will make the players and coaching staff better, not just for the women but for the club as an institution. Having healthy ways of evaluating, rethinking and evolving can only be positive. It is just a shame that they are in this position with the injuries now.

I’m glad to read that the club are taking this seriously. Tim, I remember seeing your tweet at the start of the season with two players for every position, but now it seems we don’t have a lot or depth after all, since we can barely field a competitive 11 with 7 players out. I’m guessing our squad, in numbers, is still smaller than Chelsea & Man City’s (even if everyone were fit)? I’m a bit baffled as to why Joe prefers the smaller squads, when this is the second time this calendar year that we seem to have a… Read more »

If City and even Chelsea had 7 players out, they would also be in trouble. Chelsea may have cover for midfield and attack, but their defensive backups are much weaker than ours. We don’t have numbers problem. We have 4 world class players, who can play as 8/10, three of those are injured. It is not possible to have more for one position. We had 7 out and were able to field a team capable of beating midtable Brighton 5:0. Sundays 11 is very good team. It is just not possible to be successful long term when we have 7… Read more »

I agree if any WSL are 7 first team players short they will struggle but the fact remains that none of the other teams have that problem and we need to find out why.
I also accept, as in my other post, that the injuries are more muscular in origin at the moment but it is not even cold yet and we have not played that many games so why is it happening? There must be a fundamental reason. It cannot be down to bad luck.

Arsenal’s squad is the same size as City’s. Look at it this way, Arsenal had 7 injuries on Sunday and the team was Zinsberger, Maier, Beattie, Williamson, McCabe, Walti, Gut, DvD, Mead, Foord, Viv. That’s very strong. Arsenal aren’t struggling to put an XI together but the bench is suffering.

But let’s take the equivalent players from City; Bronze, Stokes, Weir, Mewes, Lavelle, Beckie and Stanway. Now try and put an 18 together. Tough.

Its the Arsenal
Reply to  Tim Stillman

Tim do we know whether Maritz’s injury is muscular or impact related?

I just hope it doesn’t effect our whole season. We used to be the undisputed best in the women’s game, l look forward to that returning…… Soon ?