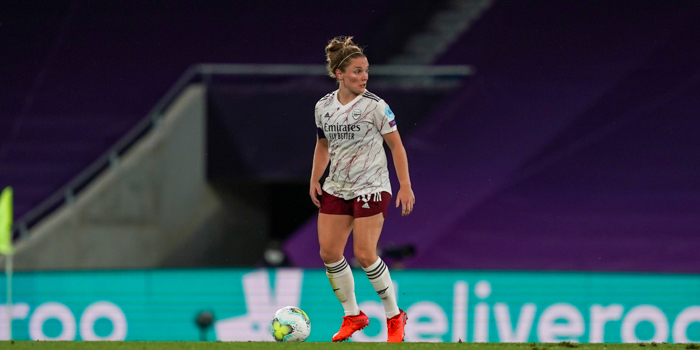 Arsenal captain Kim Little has been impressed by 20-year old Swiss midfielder Malin Gut, who started back to back games for the Gunners against Chelsea and Brighton last week. Boss Joe Montemurro wanted to integrate Gut, who arrived from Grasshopper Zurich this summer, more slowly. Injuries to Kim Little, Jordan Nobbs and Jill Roord have forced the manager’s hand however.

When Arseblog News spoke to Leah Williamson last month, she intimated that Malin had taken Kim’s eye in training. ” I have heard Kim talk about how good Malin will be and if real talent like Kim recognises that then she must be pretty good!”

Speaking to Arseblog News on Wednesday, Kim was happy to confirm Leah’s comment, “It’s great to have Malin here and she’s actually very like Lia Wälti in how she plays, very selfless but very good technically and she has a really good eye for forward passes which, for me, is fun to play with. She has such great potential and being at a team like Arsenal and the way Joe wants to play she can go on to be a great player and keep improving.

“I’ve not yet played with her in a match because I’ve had a minor injury but she’s done great in the last two games and especially on Sunday against Brighton, her and Lia had a really good partnership and they were rock solid for us in that base of midfield.”

malin gut puts switzerland 1-0 ahead of belgium in their euro qualifier pic.twitter.com/CSjKsvcsmi

Caitlin Foord is another player to have caught the captain’s eye, the Australian has four assists and three goals already this season after arriving in North London in February. Foord only played twice for the club before the coronavirus pandemic struck in March.

“She came earlier in the year and didn’t get fully absorbed into the team because of the pandemic and then she went away on international duty [in early March] and had to quarantine when she came back and then we went into lockdown for several months. She has found her feet now and she gives us a different dimension as a forward- she’s very powerful and strong on the ball and a really great dribbler too.

“She’s fitted in really well and we’ve now got Lydia [Williams] and Steph [Catley] in from Australia too which I am sure has helped her to settle in.”

Arsenal play at home to Tottenham Hotspur at 2.30pm on Sunday in the WSL. The match will be screened live on BT Sport in the UK and will be shown in every territory that has a WSL TV rights deal. If your territory doesn’t have a WSL rights deal, you will be able to watch the game free of charge on the FA Player app.

Malin was probably intended as the natural successor to Lia but to have them both is a real bonus. Let’s hope they can both avoid the injury plague!

Unfortunately this website has caved in to the notion that you have to include women in everything , I’m seeing more news about the women’s team than the men’s team.
if it’s all about inclusion why not post more youth football like u16’s for example. As the views and comments show a large population of the people that come to this website come for the men’s first team

We have a dedicated section to the women’s team, as we do with the reserves, and the mens team – and all the other aspects of the club. The really simple solution is to read the stories which interest you, and don’t read the ones that don’t. With the greatest of respect, nobody is interested in what you as an individual don’t like. I hate cauliflower, but if it’s on the menu at a restaurant, I just don’t order it. I don’t shout at the chef for including it in the first place. As for the idea that we’ve ‘caved in’,… Read more »

Not a fan of Cauliflower cheese?

Make a note of where you were during Coliflowergate. Surely your grandkids will ask

Well, this puts to bed the rumours that Blogs and Graham Rowntree are an item then…

I defended you to the hilt on Boywonder’s comment – but don’t go dissing the cauli! The greatest of all flowers!

I love cauliflower especially grilled so the florets are slightly singed!
For those of us that are Arsenal fans, and are capable of supporting more than only one of the teams they have assembled, this is an excellent resource thanks to the efforts of Blogs and Tim etc. It has far better content and is more contemporary than the official Gunner’s site which has had no updates at all since yesterday!

To add to Andrew’s comment, the reason you’re seeing lots of stories about the women’s team in comparison to the men’s is because the women have a very busy schedule of games whereas the men have internationals. Next week it’ll reverse when the men’s team get back into club games and the women go off for internationals. Maybe reflect on why you didn’t realise that the site comprehensively covers the youth teams but you felt moved to oppose the coverage of the women’s team. You don’t have to answer here but honestly, just reflect a little on why that might… Read more »

A very kind and nuanced way to point out the obvious fact that if someone is so worked up about extra coverage on the site that he try to re-direct resources away from adult women in favour of pubescent boys, then he is ergo likely to be a raging misogynist. Having been an Arsenal fan for decades, I am a little embarrassed that I only started taking an interest in the women’s team recently. And part of that is the negative sexist focus that we all carry, I am also embarrassed to say. But also for a long time, it… Read more »

Unfortunately, a perfectly good story about how good Kim thinks Malin and Caitlin are and what a boost to the team they will be has been overtaken by reaction to a bigot who wants someone to spoonfeed him only what he wants to read.
Getting back to the original subject I forgot to comment on how impressed I have been with Caitlin’s improvement after a run of just a few games. She might be challenging Meado for the assist mistress title this season!