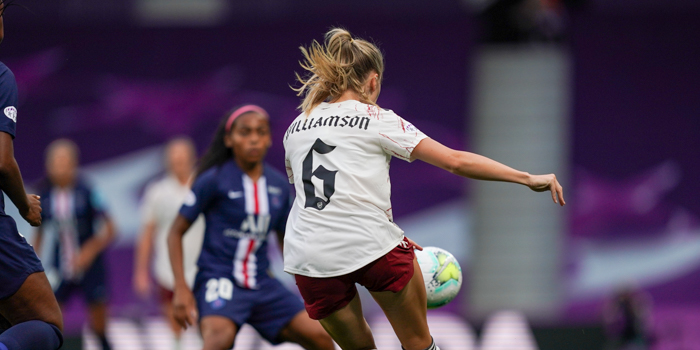 Minutes after Arsenal’s penalty shootout defeat to Manchester City in the 2019 Conti Cup Final, I spoke to an ashen faced Leah Williamson, still coming to terms with the sting of defeat. Leah had won player of the match for her display at centre-half but missed a penalty in the shootout. I felt guilty for asking to interview her at such a raw moment but I was asked whom I wanted to interview before the shootout had taken place.

Had I known Leah would miss I probably would have left her be. The rawness was evident, before I switched the microphone on I congratulated her on her performance. “If I’d had a shitter, I probably would’ve scored the pen,” she remarked. With the flashing red light on the mic her responses were no less compromising. “We’re pissed off now, so we’re going to go and win the league.”

Fast forward 12 months and despite dominating Chelsea in the 2020 Conti Cup Final, Arsenal miss a host of presentable chances and a stoppage time goal from Beth England wins the trophy for the Blues. Earlier in the month, the Gunners dominated away at Manchester City but also lost 2-1. Only this time, there would be no time to formulate a response, no time for getting pissed off and taking out on Arsenal’s beleaguered opponents during the run-in.

I ask Leah whether losing that opportunity to respond to those chastening February defeats is a motivator going into the new season, “We have left it behind as much as possible and tried to look forward,” she says. “We ended up third which is not an ideal situation for us in any shape or form but ultimately it was our performances which put us in the situation we were in. Obviously we wanted to rectify that and the new season is the perfect opportunity.”

If Arsenal’s 6-1 mauling of Reading on the opening day is anything to go by, it’s an opportunity the team are keen to take. Arsenal will still get the opportunity to win last season’s FA Cup, which is being played in September and October. The Gunners have a quarter-final tie against Spurs on Saturday, 26th September. The club has won all three domestic trophies a record number of times and it’s a heritage the club holds very proudly.

“We missed out on silverware as well, which is definitely something we want to change,” Williamson points out. “But we are leaving last season behind in the sense that there is nothing we can do to affect that now. We want to rectify it this season and win silverware again. We want to put ourselves back up there in the league as well.”

Our trio have all been named in the #PFAAwards WSL Team of the Year ? pic.twitter.com/2M2GO0FBdW

There has been a frisson of excitement in the WSL this summer with big names such as Lucy Bronze, Rose Lavelle, Sam Mewis and Pernille Harder coming into the league. Arsenal have added five international players themselves but have kept the spine of the team the same. I ask Leah whether that continuity is a strength going into the new campaign.

“Definitely, definitely,” she says resoundingly. “It’s easy to look at new as shinier and better. But at the same time, keeping that consistency in a team, especially through the spine of the team, is really important and the key to success sometimes. Hopefully, that can play in our favour. I’m hoping that will be a big player for us this season along with the additions that we have made.”

“I can’t speak highly enough of the girls who have come in, in terms of their character and just who they are as people,” Leah explains. “They have come in and made a real positive impact. We lost players like Louise Quinn, Mitch and Dan Carter who are big personalities, big characters. You saw the PSG game and Noelle Maritz was our player of the match. She had a great game and was maybe the only one of us who can say that.

“Steph, we missed for a little while as she was nursing an injury but from what I see of her, she is the type of player that somebody like me, being young and still trying to grow, she is the type of player I want to be surrounded by. Malin, there’s talent there. I have heard Kim talk about how good Malin will be and if real talent like Kim recognises that then she must be pretty good!

“Lydia is probably one of the best characters I have ever known in football so I can’t wait to work with her. In our first session she apologised for speaking too much and I said ‘my ears are open mate, keep going!’ It’s good – we have a really nice balance and they are perhaps regarded as unglamorous signings; but in terms of what they add to our team, it is strong.”

Arsenal play away at West Ham United on Saturday evening at 5.20pm. The game is live on BT Sport 1 in the UK and will be broadcast everywhere in the world, whether through a local TV deal or else the free FA Player app.

As someone younger than I might say, your centre half could never https://t.co/cRdERjUW7z

From your lips to God’s ears, Leah!