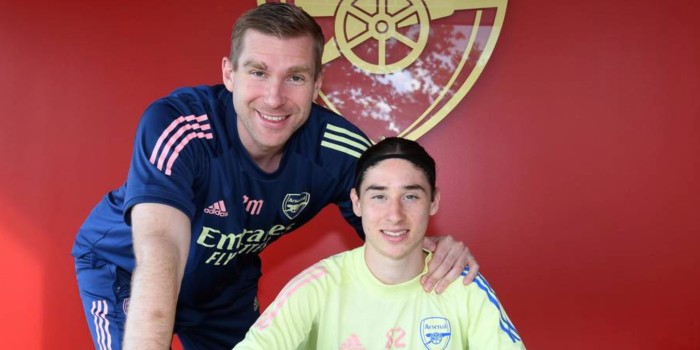 Arsenal have confirmed that highly-rated attacker Marcelo Flores has signed professional terms with the club.

The 17-year-old was recruited from Ipswich in July 2019 and has since been a regular in our under-18s ever since.

A British passport holder, he was born in Canada and has been capped by Mexico at youth level. In the words of the club, “he is known for his agility, pace and creativity.”

His dad also thinks he has what it takes to succeed at Arsenal. In a recent interview with Mexican publication Milenio, he said: “Two years ago Bukayo Saka used to play where Marcelo is playing now and last year he made his debut in the Champions League.

“Now they have given him a contract with the first team, he played all the games and is now a first team player.

“So, to put it in perspective, in two years Marcelo could be playing for Arsenal’s first team if the results come. That’s why they want to give him a professional contract.

“In addition, Per Mertesacker, world champion with Germany and former captain of Arsenal, is the director of the Academy and he has a lot of faith in him and he’s very excited to have Marcelo.

“They have treated him wonderfully and he offered him this contract for five years.”

Best of luck to Marcelo.

I like the idea that there are so many young players arriving in the last few days that Per does a little induction speech, gives them a map of Colney and a matching backpack.

Congrats on the contract! Hopefully will choose Canada for national duty, and with Fonzie give us even a glimmer of hope for any kind of qualification….please, we have sucked long enough…

Not holding my breath, but fingers crossed haha

Maybe he becomes as good as Pulisic is for your neighbors

Not a chance, His father is Mexican and his sister has already chosen to play for Mexico. Sorry Canada but i don’t see a future where marcelo plays for one of the weaker sides in concacaf.

Nice to think we were in the Champions League. Better not tell Marcelo’s Dad.

Haha my thoughts exactly. I was like wait did I miss something?

I also think that Bukayo plays on another level, but the dad takes it quite literally.

Do all new signings feel like six-year-olds meeting their first teacher when they meet Per?

He would make a great kindergarden teacher wouldn’t he

Kinda looks like a young Per with dark hair

The kid looks stressed by that grinning man that has put his bear paw on his shoulder.

Not sure if Per’s head is really huge or Marcelo’s head really tiny, but the difference is really freaking me out.

Salibaba and the Forty Thieves
Reply to  Bobby

I mean Per is almost a giant after all. He’s taller than some basketball players

Well done Per, and congrats to the young man. Appointing Per to run the academy is proving to be one of the better business that Arsenal did, he is good

His dad is already conversant with agent talk. You’d think there’s a move on the cards or a contract to sign and Yaya Toure’s agent in his earpiece

A British passport so I guess he could switch to playing for England?