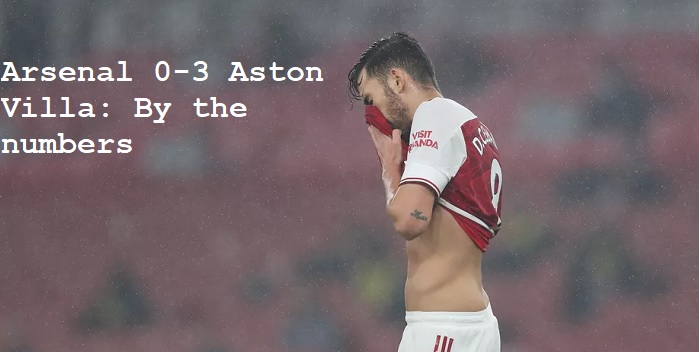 I needed a day after this very frustrating match to collect my thoughts. I have cooled down some but I have a feeling that this is going to be a long and maddening international break where the issues with Arsenal are gone through with a fine tooth comb.

Arsenal 0-3 Aston Villa: By the graphs 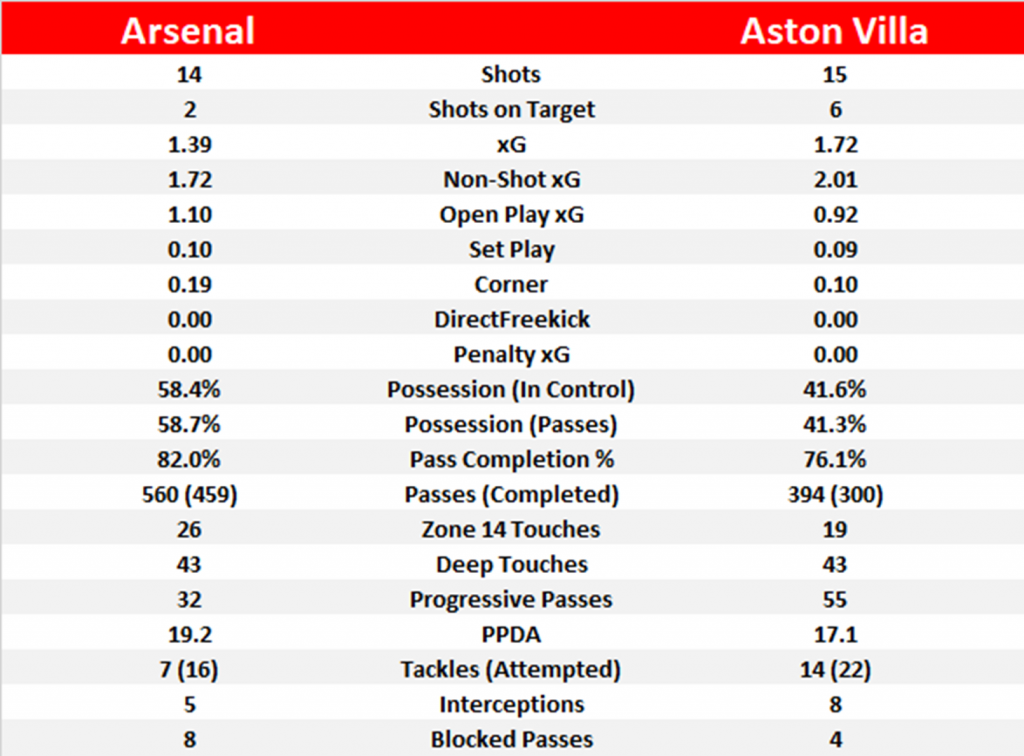 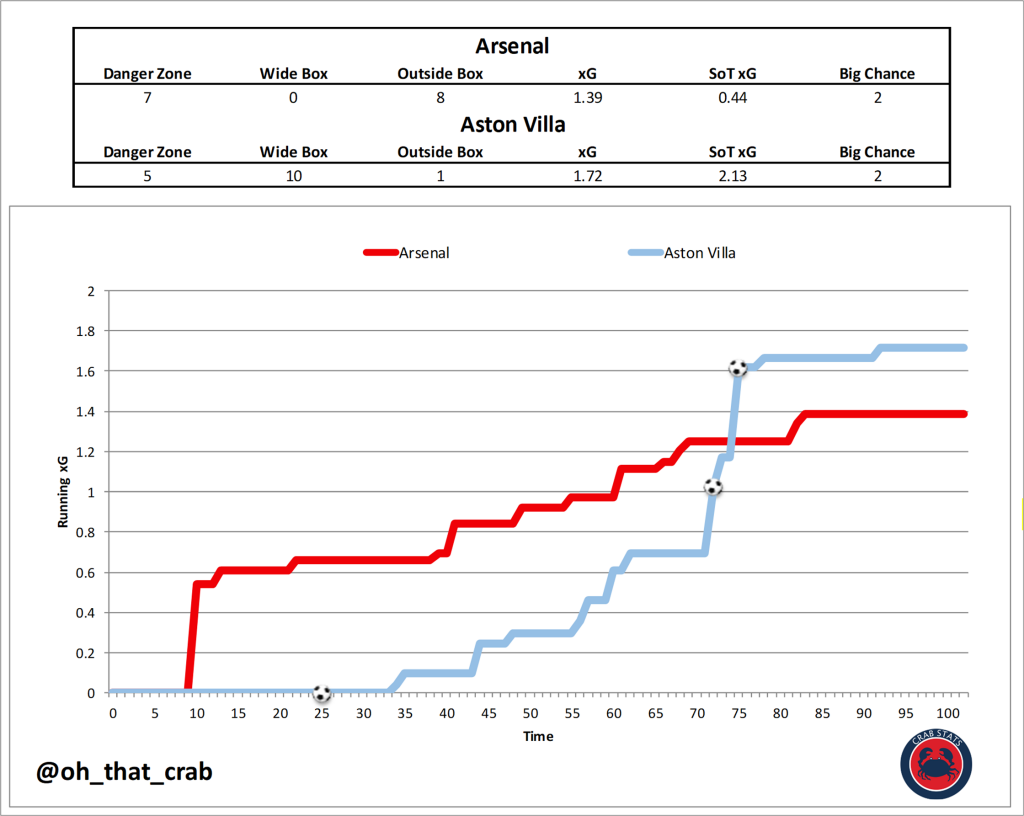 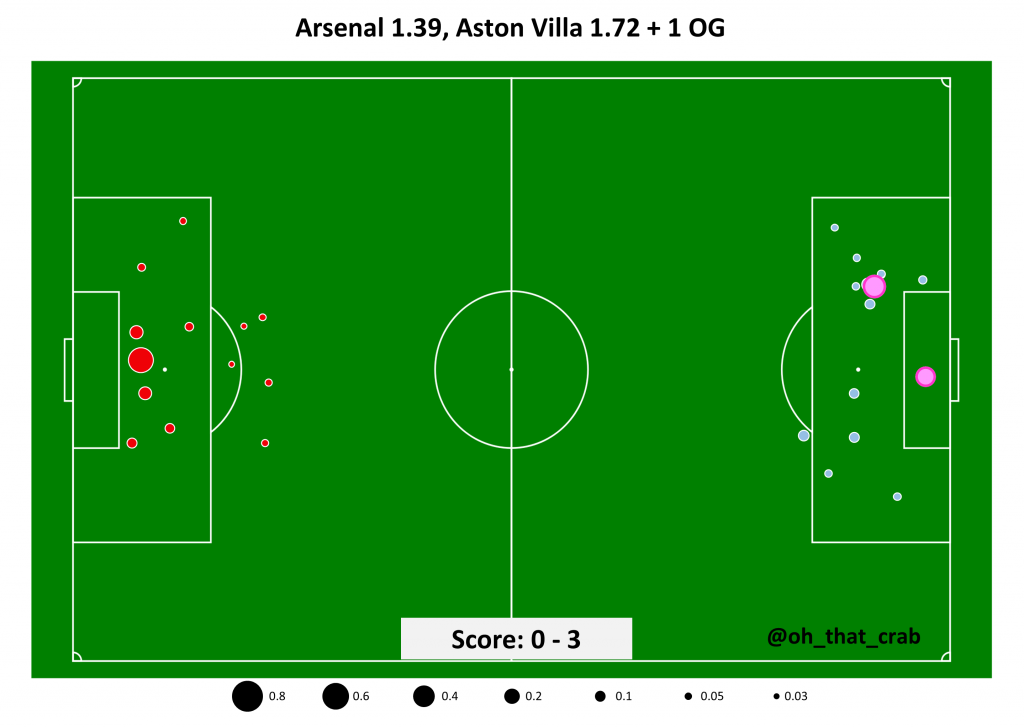 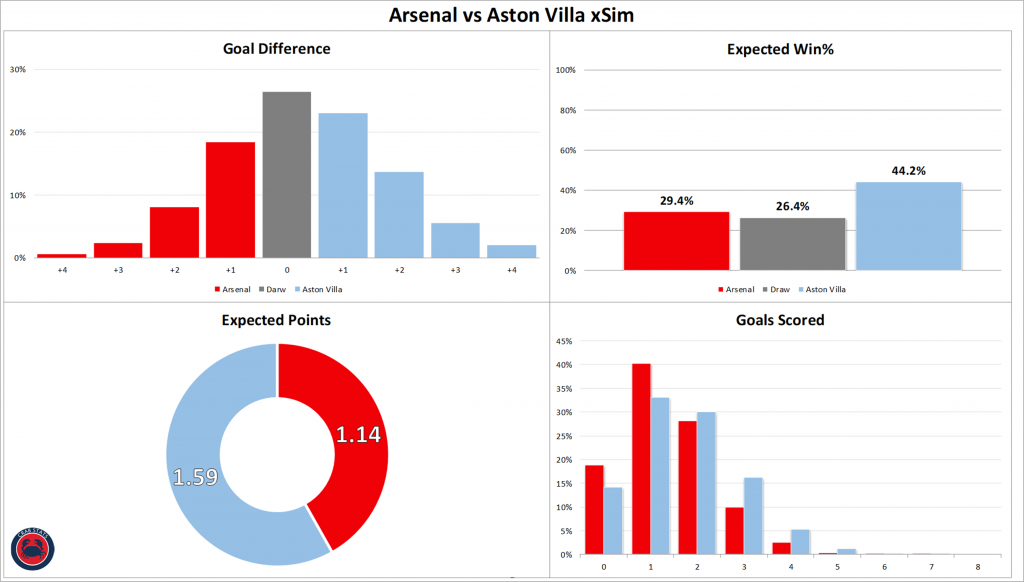 13 – Shots for Arsenal, tied for most this season in the Premier League

17 – Shots allowed by Arsenal, second most this season in the Premier League

2 – Shots on target for Arsenal, second fewest in the Premier League this season (Manchester United last weekend was the fewest)

5 – Shots on target allowed by Arsenal, tied for second most in the Premier League this season.

6 – Passes into the penalty area completed, fourth fewest in the Premier League this season

16 – Passes into the penalty area allowed, most this season in the Premier League

This match was very frustrating and I think a couple of these high level stats really help explain some of my frustration. The 13 shots that Arsenal took were tied for the most that Arsenal have taken this season. Arsenal have played 8 matches this season and having 13 shots be the most that the team has taken is shocking to me. The decline in shot numbers has been going on for the last couple of seasons but it really feels like things are hitting a new low.

One of the trade offs that is supposed to come with this neutering of the attack is that the opposition is also supposed to be kept at arms length. For the most part that has happened this season, but in this match Aston Villa seemed to have no problem advancing the ball quickly up the field to their two most creative players in Jack Grealish and Ross Barkley.

Barkley managed to have 43 touches in the final third leading all players, Grealish got the ball in the final third 31 times, by comparison Pierre-Emerick Aubameyang and Willian led Arsenal but only managed 23 final third touches a piece. It is just as stark looking at touches in the penalty area where Barkley had 11, Grealish 10 with just 4 each for Aubameyang and Willian. I am not even sure who is supposed to be the main creative force for Arsenal but in this match they struggled to get anyone a decent volume of touches in positions to create for teammates.

This leads into the next thing that is really frustrating for me. If a team is not going to play with a “creative” attacking player one of there are a few alternatives to create chances. The first is playing on the counter attack, but that didn’t really seem to be in the cards in this match. More and more teams are also not coming out to challenge Arsenal when they have possession in their own half which constricts the space that Arsenal would like to take advantage of. In the last three Premier League matches teams have all pressured Arsenal less than 30 times in Arsenal’s defensive third, that happened in just 8 matches last season.

The other effective way of creating big chances without a traditional creative player is using a high press to create transitions high up the pitch, in this match Arsenal’s best chance came from one of these rare situations. This is one of the things that Arsenal seemed to do a lot more in the beginning of the Mikel Arteta area but has really dropped off lately. Last season before lock down, Arsenal averaged 33 attacking third pressures per match, during project restart that dropped to 28, and this season it has fallen to 27. These typically end up with the team regaining possession about a quarter of the time, so those 5 missing pressures are leading to 1 to 2 less chances to attack in transitions compared to last season.

Willian not living up to expectations

1.4 – Passes completed into the penalty area per 90 this season, down from 2.4 last season

2.6 – Shot creating actions per 90 minutes this season, down from 5.1 last season

It is still really early (just 7 matches and 512 minutes) but one of the selling points of the signing of Willian was that he was Premier League ready and should have been able to slot right into the team, injecting attacking threat without a settling period.

Right now his numbers have almost across the board declined. The decline hasn’t been modest for most of these stats either with 50% or more compared to what he was able to do in the Premier League with Chelsea last season.

The share of minutes (71% of minutes compared to 76%) and average minutes per match (73 vs 72) being played is all in line as well so I don’t think that this is something weird in the playing time.

I had major concerns about this deal when he was signed, but I did have hope that at least for this season he would be able to provide something positive. I am coming more and more concerned that this will not be the case.

Sources: Opta via Whoscored, StatsZone and my own database. StatsBomb via FBRef.

Arteta: Villa game left a bad taste but I’m not ripping things up

Arsenal 0-3 Aston Villa: By The Visuals

Wenger’s insistence on only giving players over 30 a single year contract is starting to make a lot of retrospective sense!

He also spoke about the virtual 4th place trophy, during the lean years – I get that too!

A P
Reply to  Artro

Wouldn’t mind dropping out of CL to get rid of Wenger, they said.

I would love some Wenger now.

Futsboller
Reply to  A P

John C is coming to get ya!

We were already out of the Champions League with Wenger!!!

A P
Reply to  John C

Hey J Cuntoman , the plan was only to drop out for a couple of years before a glorious return, not make it harder and harder to qualify!

He and the other three mouseketeers: Fats, Rob and Tobin.

Dave cee
Reply to  A P

I’ll join that band. We were out of the CL, playing dire football and signing useless players long before Arsene left

He and his fellow mouseketeers making up the lol gang: Fats, Rob & Tobin.

Great analysis as usual. Arsenal are in a complete rut. The transfer deals Arsenal have made in recent seasons have been a mix of good and downright abysmal. Sanllehi and co contributed to Martinelli, but the other signings have been pretty poor by comparison. Gabriel and Partey are top signings, but Willian, Mari, Cedric and the retention of Luiz are awful. The fact that Mustafi is still called upon is shocking, as he is so inconsistent it hurts. Sticking with Lacazette to lead the line is another error, as he simply isnt up to the task. Freezing Ozil, for whatever… Read more »

End of the season? He will be lucky to get there. Ljungberg, anyone?

You did a good job not letting your frustrations boil over Scott. That was a dismal game. Felt like we got out coached by Villa who took the game to us, attacked our perceived weaker right side and once they’d taken the lead countered us into submission. We played a back five at home and don’t let the wingbacks overload with the attacking three. Not surprised we got nothing from the game.

Sadly, I don’t think it takes much coaching to get at us right now — sit back and keep an eye on Auba, force us to play with minimum creative prowess, turn it over, hit our exposed right side … voila.

More than William, the stats from Lacazette should be interesting. He wasnt in the box to attack crosses; he wasnt available to receive passes from the midfield. No idea what his role is. Looked like he was marking one of their centre backs.

Willian not dribbling or shooting is agreed but passes into the box require another player to have made a move into the box to receive it.

Exactly, this system will inhibit even the likes of Messi and Ronaldo. This approach is too structured, we just don’t commit enough to the attack. I am sure Auba’s numbers will have the same tone as of Willian’s, he’s having a nightmare of a season so far. Arteta is definitely overthinking the attacking approach.

Imagine that: Villa played with a #10 (dead in the modern game, I’ve been told) in the form of castaway Ross Barkley, and they produced three goals away at the Emirates. Rocket science, this stuff!

Effectively two numbers 10s and created overload against Holding who was beaten for speed on the turn. Bellerin is now a waste – neither a full back nor an effective winger.

Don’t forget that, it was against a team currently in the bottom half, on a run that includes 4 defeats in the last 6…oh wait that’s us – urgh!

Possession and completed passes are interesting. How come we were so bored?

Because passes were backwards for the most part. So many forward passes were giveaways. Players, like KT , would move forward then stop and turn to pass backward.

We have to start imposing our style of play. Identity, or the lack thereof, is something many of us were frustrated with under Emery. Arteta needs to start taking the attack is the best form of defence in these ‘smaller’ games and tell our players to pass the ball quicker.

I don’t agree this is a “smaller” game. If you go through the 2 starting 11s there is a good argument that at least 4 or 5 of the Villa players would make a combined 11 team. Off the top of my head Watkins, Grealish, McGinn, Cash. Quiet possibly Barkley and/or Luiz. And that’s before we even reach the toxic goalkeeper debate

Incredibly frustrating trajectory… or lack thereof. This is a club fully adrift top to bottom.

However, this analysis is gold. Really fantastic, cheers.

For instance, I actually learned new things in the 2 paragraphs above the Willian section: that other teams are pressuring us less in the defensive third (sensible adjustment on their part!) and we pressing less in the final third. Surely AFC have insight into this… yet MA keeps rolling with the tired ideas.

To all Ozil comments, Don Emery wanted Mesut Ozil out so we could get Zeyinchi…… Combared to other similar creators. Ozil is currently abysmal and out. The Zeyinchi, Madisons, Grealish, Isco, Luka Modric, Aouar, Silva, all these guys are actually creators.
Ozil is more of a supporting cast to brilliant individuals, for average individuals he becomes more of a set up to expose their obvious deficiencies.

That last paragraph Scott! Hard to imagine a single Gooner who doesn’t feel the same. Starting to look Ozilesque 🙁

Ozil’s still training well reportedly. Maybe we’ll find someone else or Willock will step up. Whichever way, no excuse for continuing past January without a quality creative midfielder