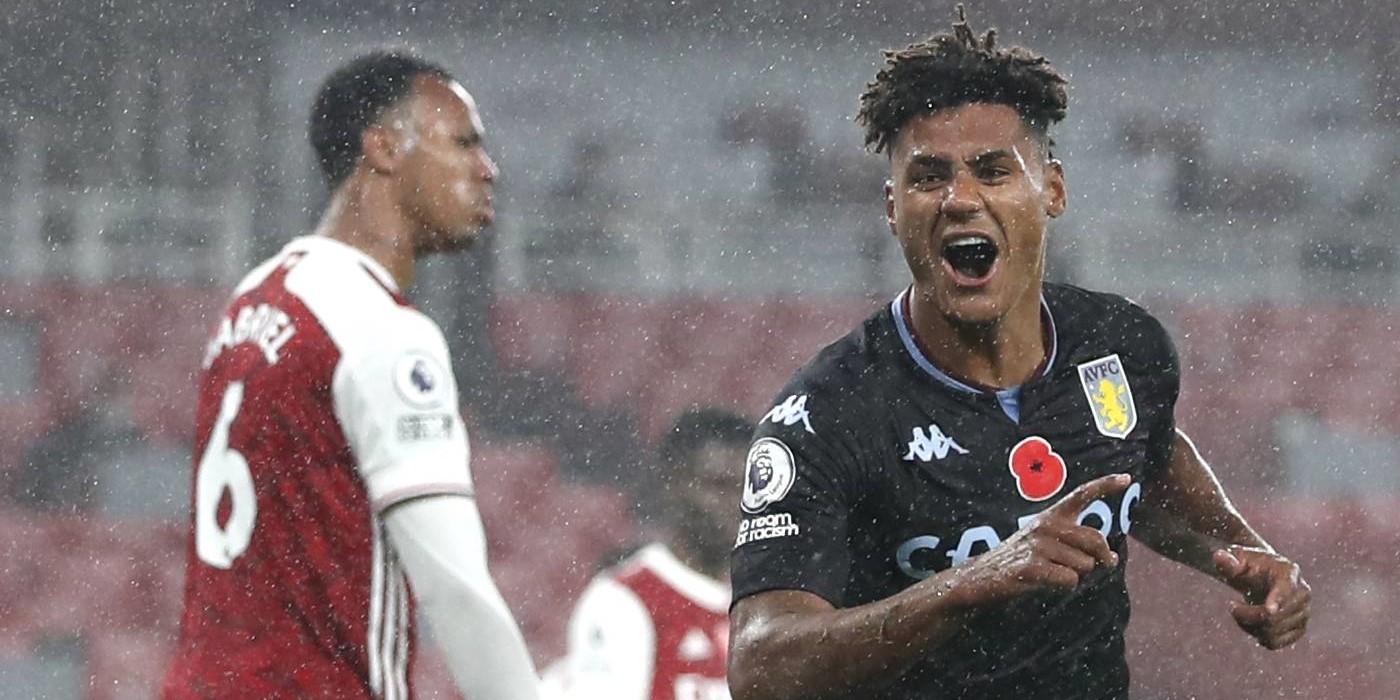 Arsenal failed to score in consecutive home games for the first time since August 2015, as Mikel Arteta’s side were well and truly outclassed in a 3-0 loss to Aston Villa. Arsenal now sit in the bottom half after 8 games and with Arsenal’s next 3 games being difficult trips to Leeds and Sp*rs and a home game against Wolves a rethink might be needed.

Let’s look at the data from Sunday’s disastrous performance. 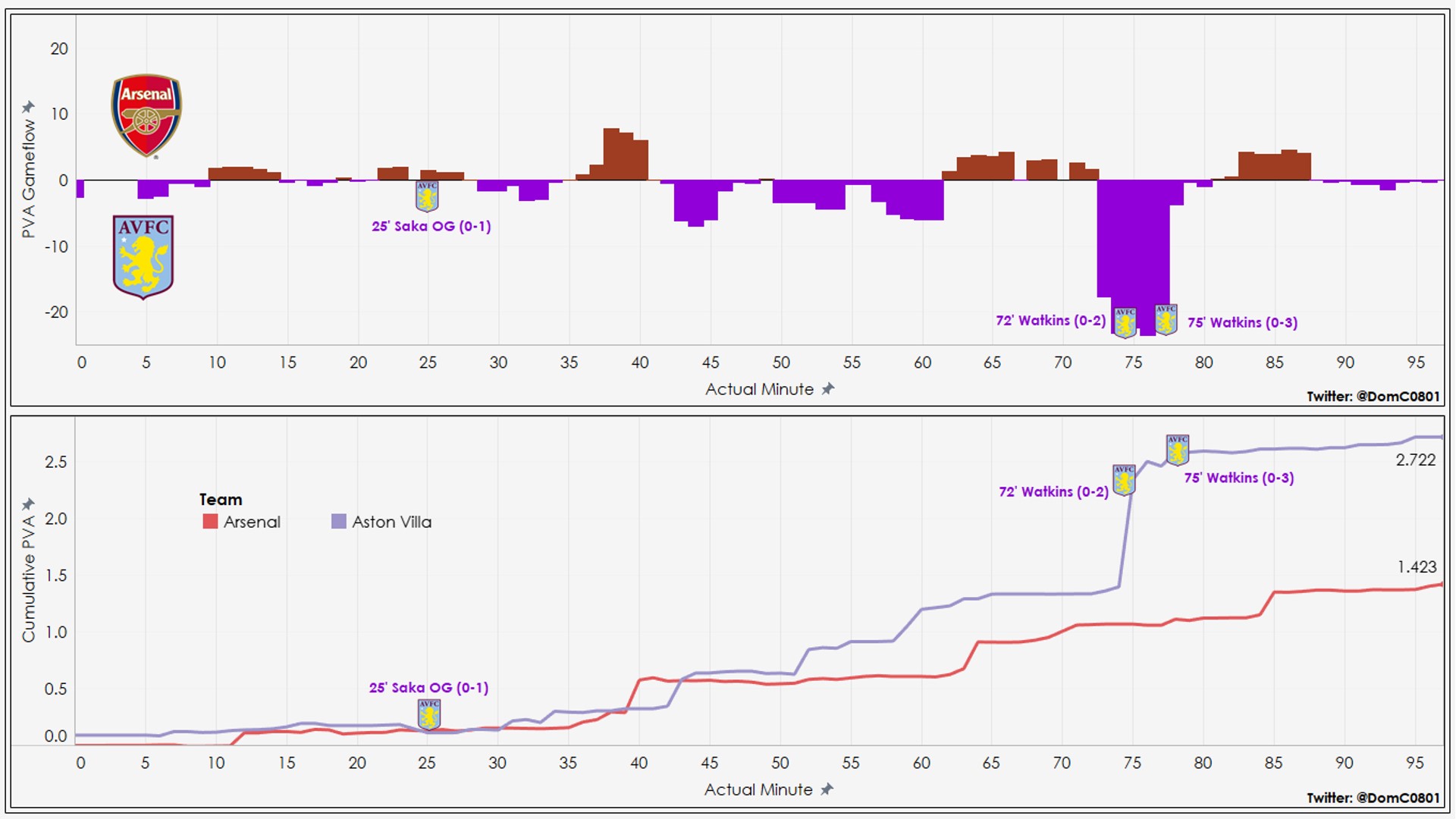 Above are the PVA (Possession Value Added) Gameflow and Cumulative PV (Possession Value) from Sunday night’s game. Villa were just the better team in all ways and although Arsenal did manage to get the ball into dangerous areas, we either couldn’t execute a good enough final ball or couldn’t finish our chances (Lacazette, Willian, Holding). Villa’s dominant spell midway through the second half put the game beyond reach and very little happened after that. 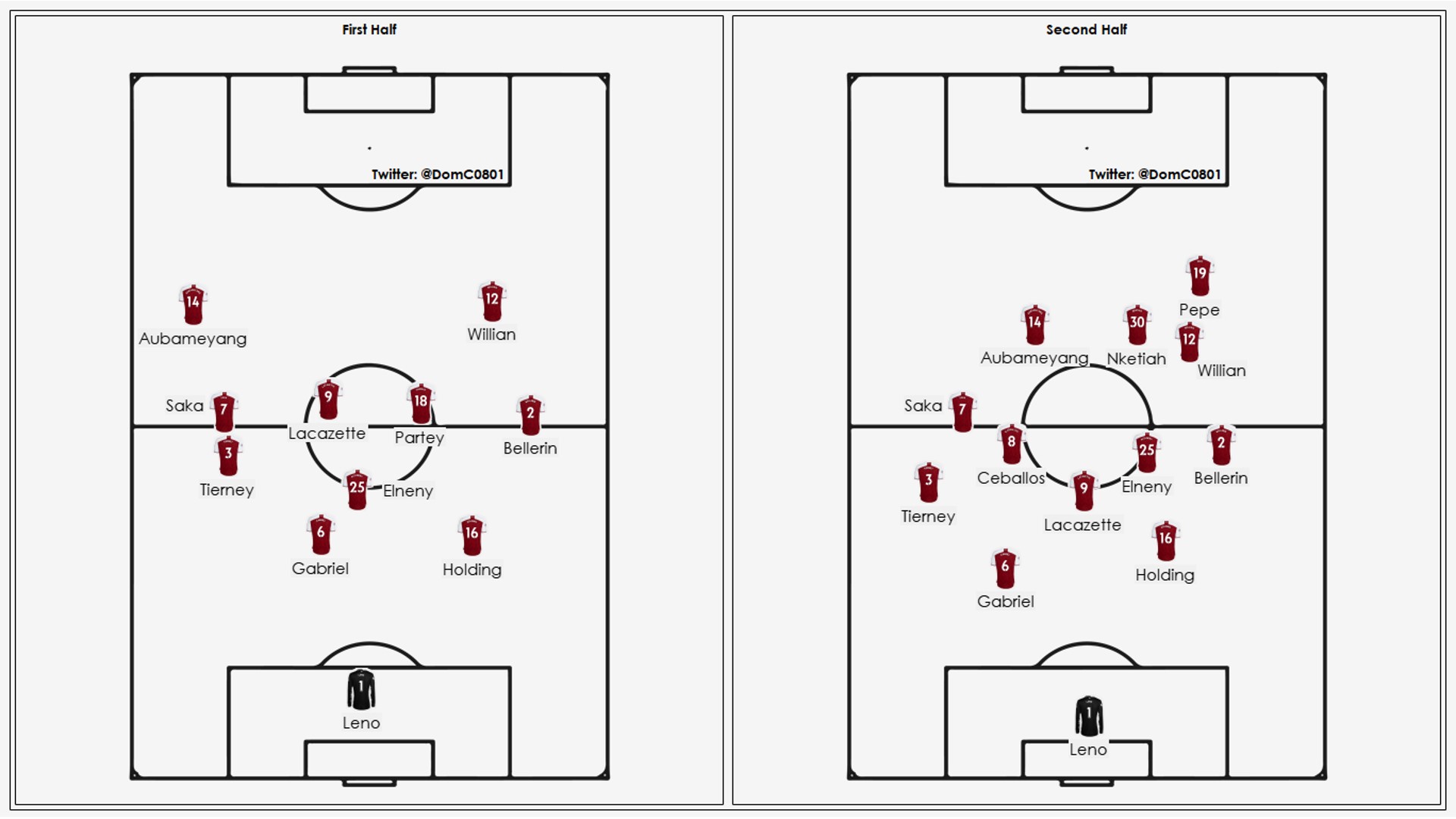 Above are the average touch positions from the first and second half. These are… well… bad. The lack of any clear shape is very worrying and Alexandre Lacazette’s deep positioning is downright confusing. Even more worrying is the fact that our 300k+ a week, captain is stranded out on the left wing in the first half completely negating his threat. 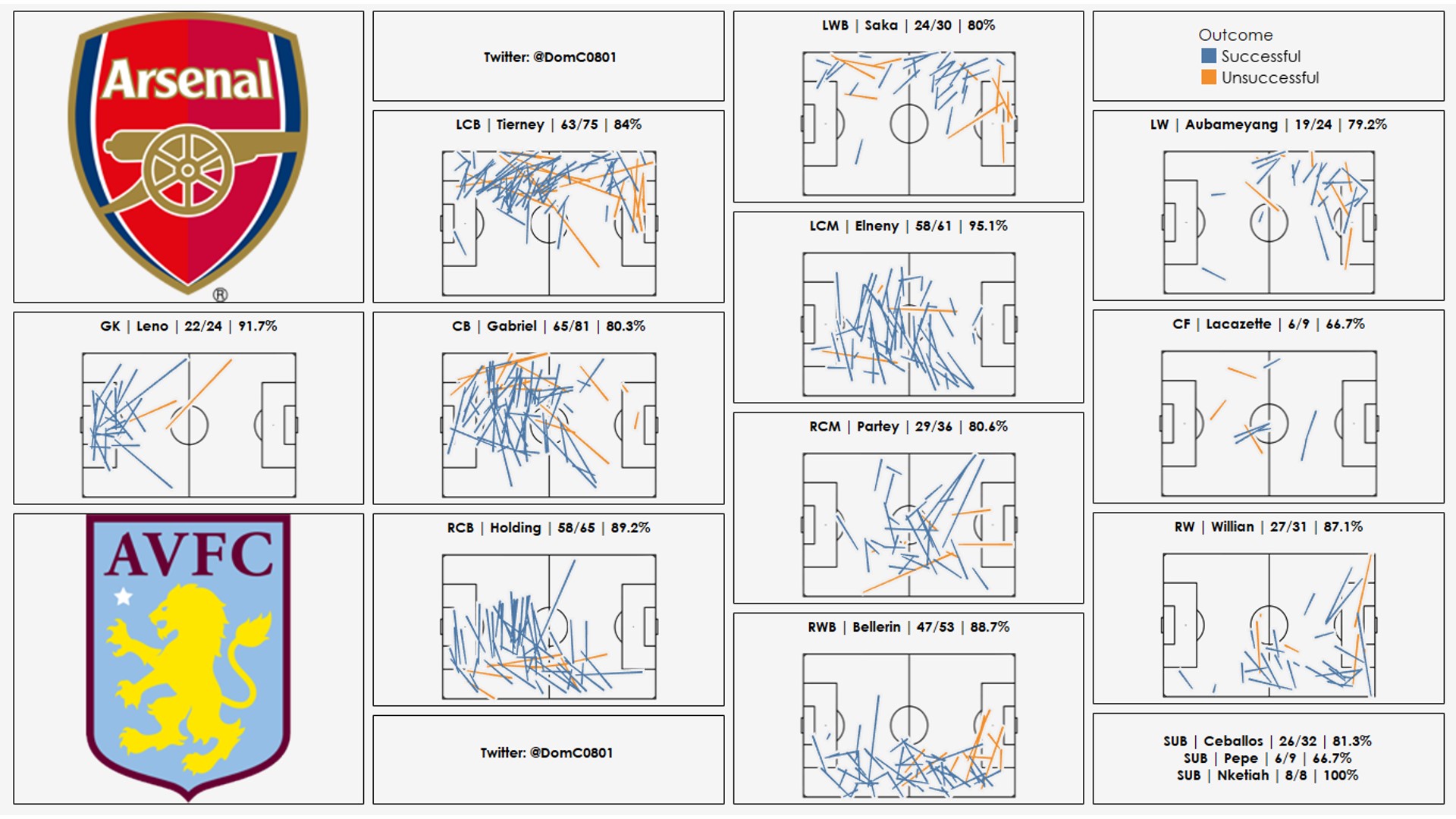 Above are the pass maps for the Starting XI. The amount of sideways passing and the lack of incisive/progressive passing is startling and it’s clear to see that this is a side that is quickly running out of ideas. Thomas Partey only played 45 minutes and yet was second in the team for progressive passes (6) only behind Hector Bellerin. Alexandre Lacazette was a complete ghost, with 2 of his 6 completed passes coming from kick-offs after Saka’s own-goal and the start of the second-half. Willian was also completely redundant, with 25 (!) of his 27 completed passes going backwards, a truly terrible performance which further highlights Arteta’s reluctance to drop ‘senior’ players even if they are out of form. 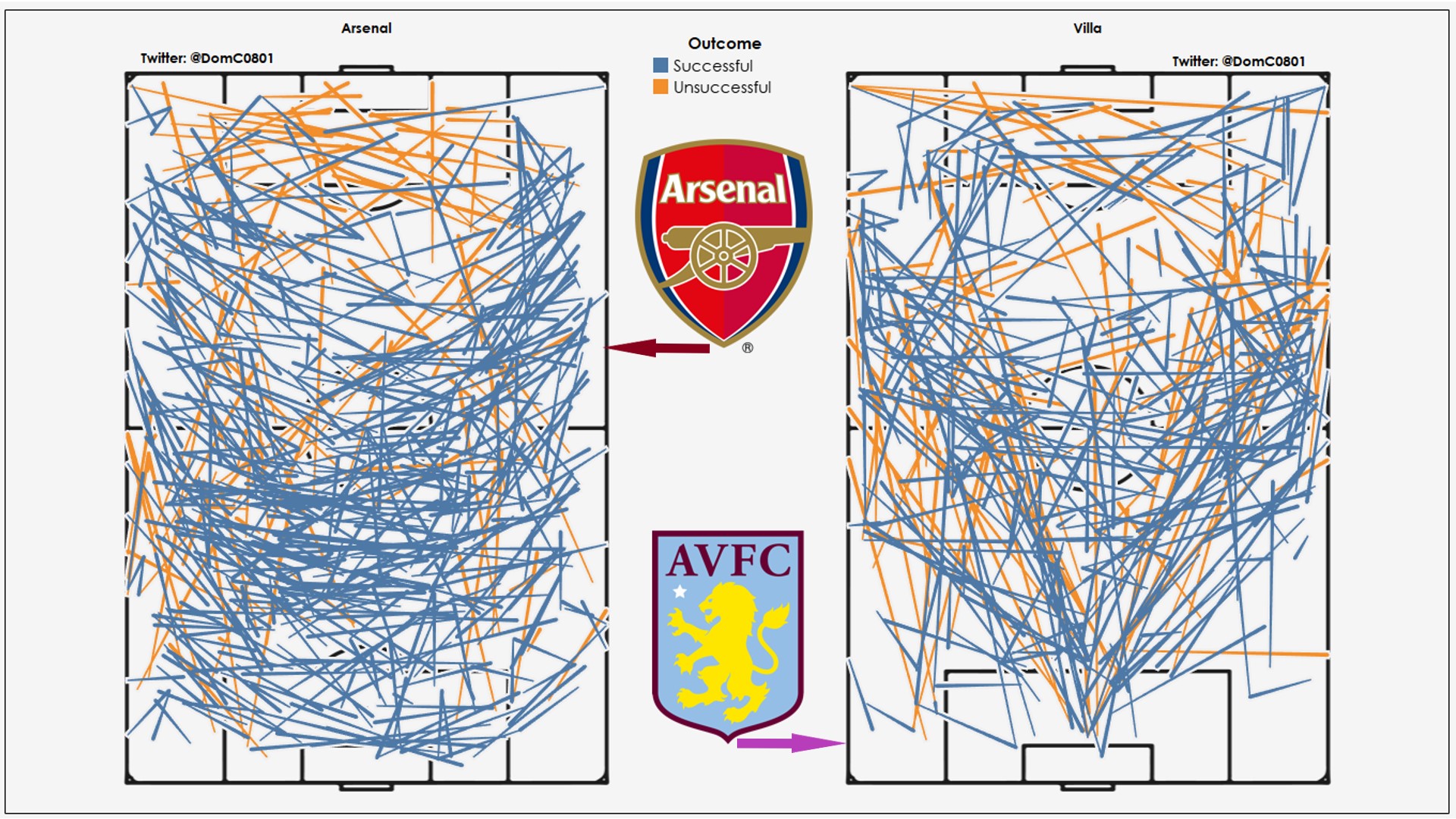 Here are the pass maps from both teams compared. What immediately jumps out is the overwhelming amount of sideways passing in the Arsenal defence and midfield. Arsenal’s attack seemed to develop the dreaded U-shape and that really does limit our creative capabilities and stifle our attacking threat.

Above are the open-play PVA values for each player. Again Willian’s performance was horrendous, with the former Chelsea man seemingly unable to pass the ball forward against Villa’s left-hand side which has proved to be relatively easy to exploit for opposition teams of late. Kieran Tierney and Hector Bellerin proved to be the two most threatening players on the night, which says a lot given I don’t think either player had a decent game by their standards. 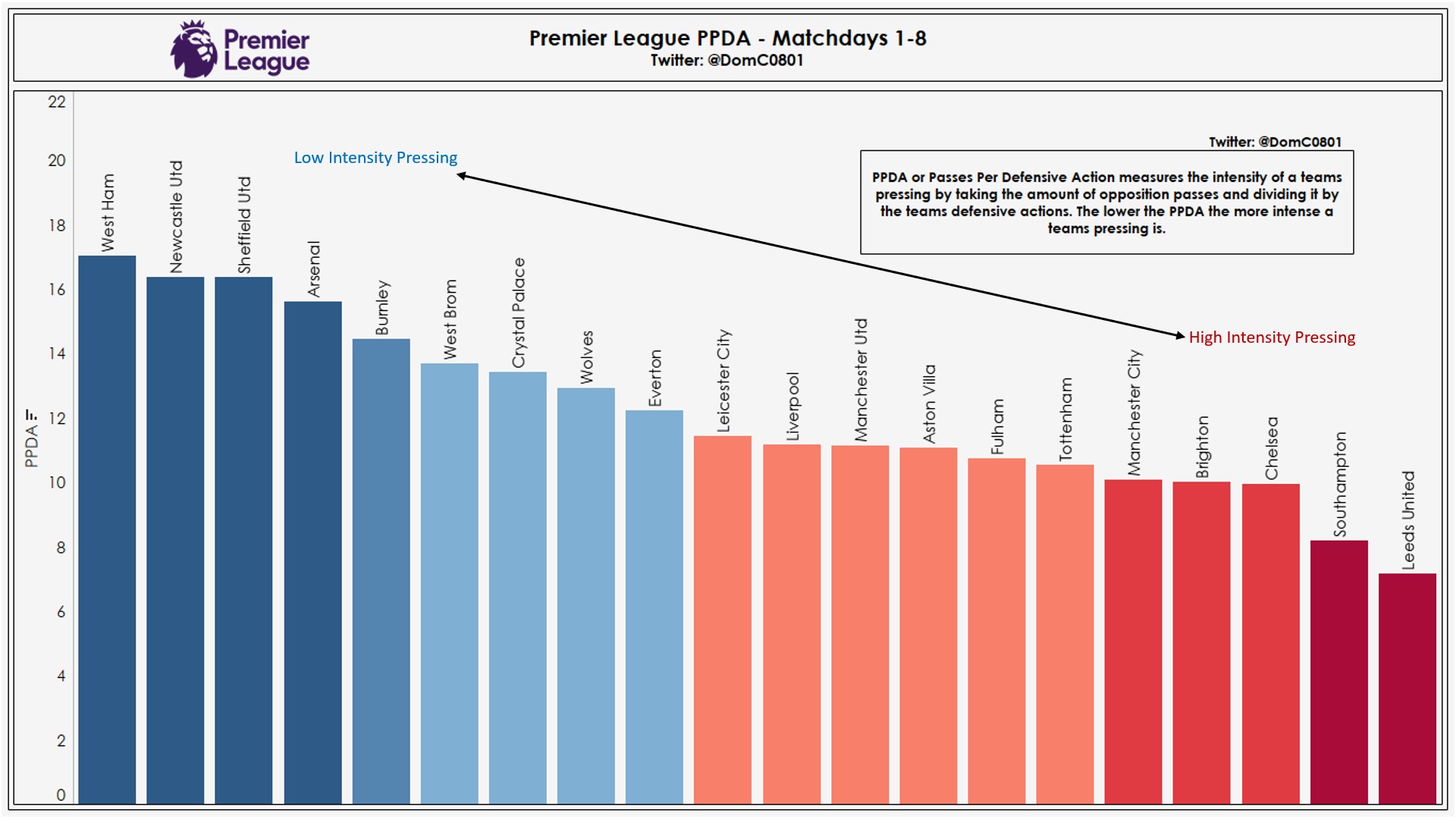 The last thing I wish to discuss is Arsenal’s pressing. Above is a graph showing each Premier League teams PPDA (Passes Per Defensive Action) which measures the amount of Opposition Passes you allow per Defensive Action. PPDA is a good measure of pressing intensity (but not pressing quality) and is thus a good way of quantifying style, with lower PPDA values meaning high intensity pressing and higher values meaning low intensity pressing. Arsenal’s Pressing Intensity is 17th in the league which, coupled with our lack of creativity is worrying. Arsenal lack a primary creator, and one way to create good chances without a primary creator is through counter-pressing and winning the ball high up the pitch as Jurgen Klopp famously said “If you win the ball back high up the pitch and you are close to the goal, it is only one pass away a really good opportunity most of the time. No playmaker in the world can be as good as a good counter-pressing situation.”. If Arsenal are going to succeed this season without highly creative players then implementing a functional high-pressing team may be a solution of sorts to what is undoubtedly our biggest problem.

Anyway, it’s a 2 week internationalbreak now before Arsenal visit Elland Road to face Marcelo Bielsa’s Leeds and I’ll be using the break to cleanse my mind of last night’s performance in an attempt to dodge the negativity that forms around the club at times like this.

Leeds 0-0 Arsenal: By The Visuals

Arteta: Villa game left a bad taste but I’m not ripping things up

We’re due for a two-week slap-party (Partey?) thanks to all the good feelings after winning at Old Trafford and getting rid of our Molde problem at the Emirates.

If you can’t handle the visuals, don’t do the trip…

Then I suggest you don’t look at the table.

Thanks for this analysis, the pass map is scary/depressing, Villa were so much more direct compared to Arsenals U-shaped passing around the edge of their box. Where are our incisive passes going to come from? Arteta has some serious tweaking to do, the Auba out left experiment has to come to an end as does the continual selection of Lacazette unfortunately, need some runners in there. I think Partey going off made a big difference and maybe we wouldn’t have shipped that many goals if he’d remained but we weren’t great shakes in the 1st half as an attacking threat… Read more »

That average touch map is diabolical. But what’s most shocking is the fact it’s been the same practically every match this season and Arteta refuses to change. As you say, it doesn’t look correct on any level. A big two weeks ahead.

Who knew Lacazette was a holding mid !

I prefer these visuals to the xG reliant stat analysis, they communicates a lot more useful information quickly and succinctly. Dom’s analysis of the data also offers conclusions and potential solutions as opposed to just highlighting what we can already tell from watching the games (that we don’t create or take chances). The question for Dom’s analysis is ‘implementing a functional high-pressing team’ achievable in the next two months or are we better off bringing a creative player in in Jan?

Internal solutions will have to be found, and they should produce both of the outcomes you mention — we need to press better and more effectively in every game, for longer periods (Elneny should perhaps, honestly, be moved forward in that sense to lead the gallop), but we also need to produce a creative player in the opposition half — we have options here ranging from Ceballos (not ideal) to ESR to Willock to Willian (get him central, as in the Sheffield second half). Arteta has to change it.

Not a knee jerk reaction, but Arteta is boring the shit out of me! If this snoozefest is the cost of bringing defensive solidity, then fuck it! I would rather enjoy us scoring 90 goals & conceding 70!
9 games, 9 goals.. This is not the Arsenal I love!

A P
Reply to  Good Ebening

I slipped into apathy sometime during Emery’s tortured reign.

-don´t really watch the games, without the occasonal exception, but could this formation be more tried out to get the team into more scoring postions:

with willan or cebb, or willock or smith-rowe in the hole (behind two forwardstrikers)?

i call it the sneaky tiger, blinding dragon formation

this is kinda what he tried vs man city with willian in the hole.

problem is, it was man city and he only gave it once match.

Horseshoe football only works if the opposition are drawn out of shape but that still requires forward runs and passes at some point.

We had a plan in loosing to Leicester, otherwise imagine who would have top of the table right now – shudders!

Willian and Laca should not be starting.

We should should play Auba through the middle and give some of the younger lads a chance.

Also, I hope Martinelli is back soon. He might be the spark we need.

Sadly, the only visuals required on Sunday were a pair of eyes. We were awful.

Please play Willock and Pepe from the start next game. No more Laca and Will.he.ain’t

I guess the manager was perhaps a bit too happy with the MU performance that he persisted with same formation and starting 11 against Villa. For this game I actually tot he could have overload on the right side, with either Saka or Joe as the extra man. This would give us an extra body to cover the threat pose by you know who. Even when Partey was playing, we were overrun on that side by the combo play of Grealish, Barkley, McGinn and Targett. Watch back the 2 goals in the first half including the one that was chalked… Read more »

Germany is producing the best coaches of this generation.

What worries me is that the visuals show the same problems and patterns week after week. Yet the same players get selected, playing the same system week after week (Premier League). We have a problem Houston and it’s not getting fixed.

I’ve become perplexed by the poor level of freekicks and corners. Willian again features in this miserable display of ineptitude. Does your visual stats tell a different story from what I observe?

Ollie Watkins up front instead of Lacazette. I’ve not seen many if any strikers match Gabriels strength but he looked strong, quick, great link up and hasn’t forgotten what a goal is for

Or just put Auba back there guess 😂

Wenger, Emery and Arteta are all Guardiola diciples: Tiki-taka football, possession, 34 passes and then, when the opposition has tired, a swift attack. First, it’s boring to watch. Secondly, we lose. Pep-ball can be tolerated (barely) only if you win. I see great hope in the rise of offensive football, like Germany in 2014, Leicester in 2016, Liverpool under Klopp (and maybe spreading to other teams, like Leeds and Aston Villa). They waste no time attacking. While it’s true the other team can’t score when you have the ball, you can’t either, as long as your only trick is slow… Read more »

Common man Arsene had managed two clubs before Guardiola had even started playing. What are you talking about?

Hey man
That’s just offensive, Wenger is a disciple of pep.
you should be ashamed!