Arsenal 1-2 Wolves: By The Visuals

Arsenal fell to a third consecutive home defeat as Mikel Arteta’s men succumbed to a 2-1 defeat against Wolverhampton Wanderers. It is another disappointing result for Arsenal who have slipped to their worst start to a league campaign since 1981-82. With the North London Derby next weekend against a top of the league Sp*rs team managed by J*se, Arteta really needs to turn around this teams fortunes if Arsenal are to have any hopes of an even remotely successful league campaign.

Let’s delve into the data to see if we can gain any more insight into another disappointing Sunday night game at the Emirates. 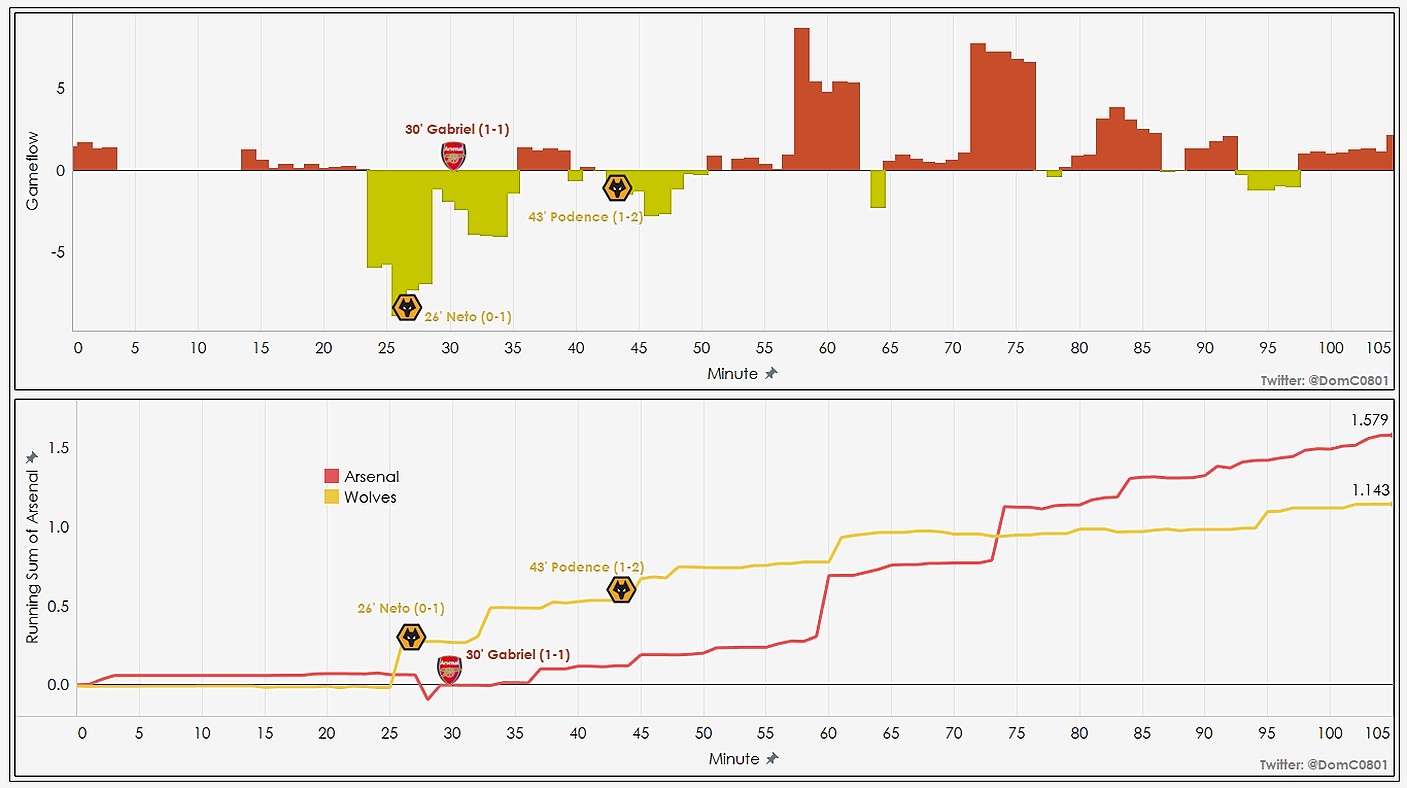 Above are the Possession Value (PV) Gameflow and Cumulative Possession Value Added (PVA) from Sunday’s game. Wolves dominated early on and took their chances and then sat back and almost dared Arsenal to score, with ultimately they did not. Arsenal seem to be able to progress the ball and get into mildly threatening areas, but no great chances seem to come from this. 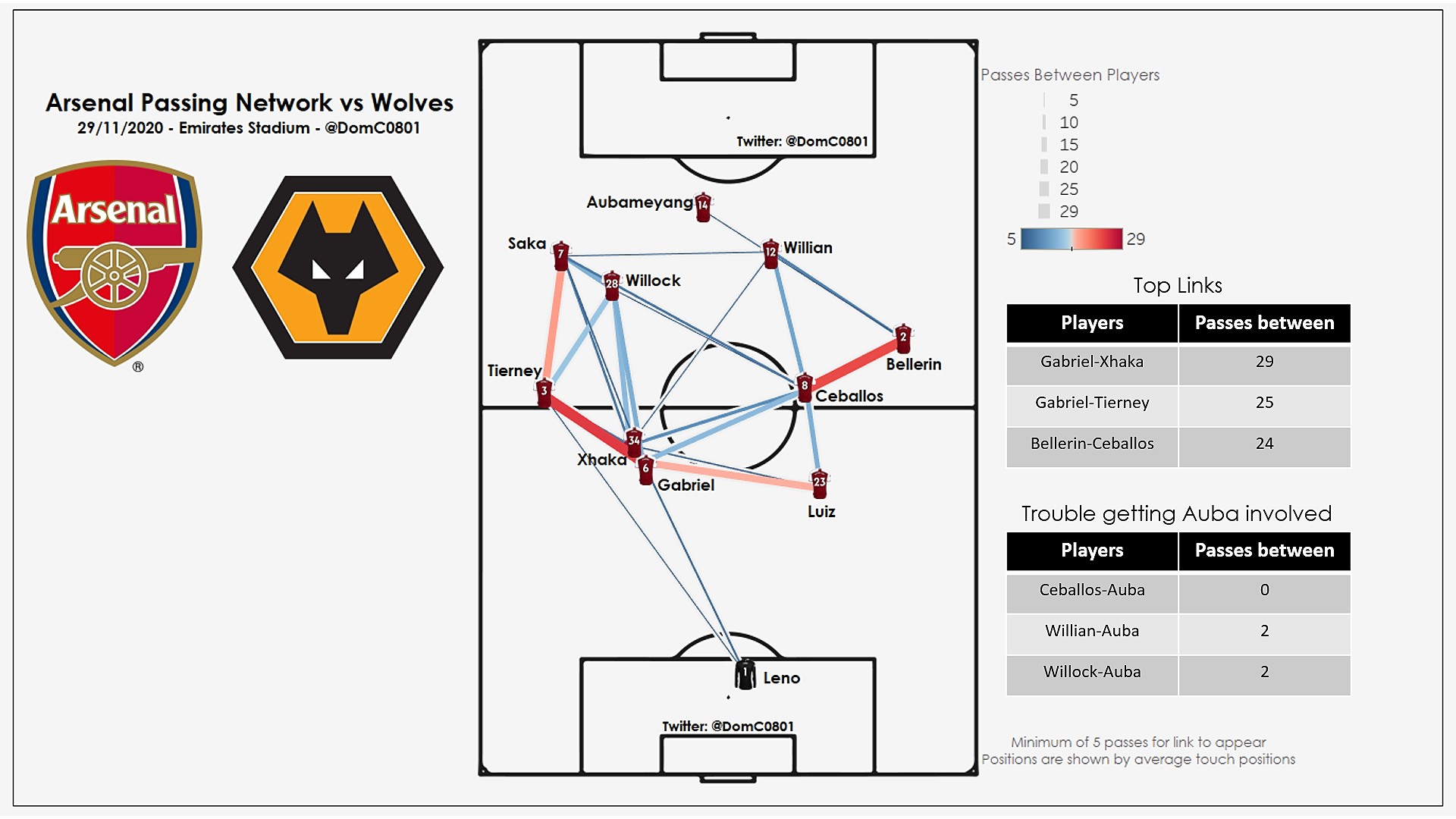 Above is the passing network from Sunday’s game. The thickness and colour of the lines connecting the players indicate the frequency of passes between those players (with 5 passes being the minimum number needed for a line to appear). Look how completely isolated Aubameyang is from the rest of the team, with Hector Bellerin the only link to appear. Granit Xhaka and Dani Ceballos meanwhile seem to serve to slow down build-up with Xhaka almost right on top of Gabriel and Ceballos seemingly only able to connect with Bellerin. Saka, Willock and Willian meanwhile seemed incapable of connecting with each other or Aubameyang to any great effect and ended up stuck out wide for most of the game. 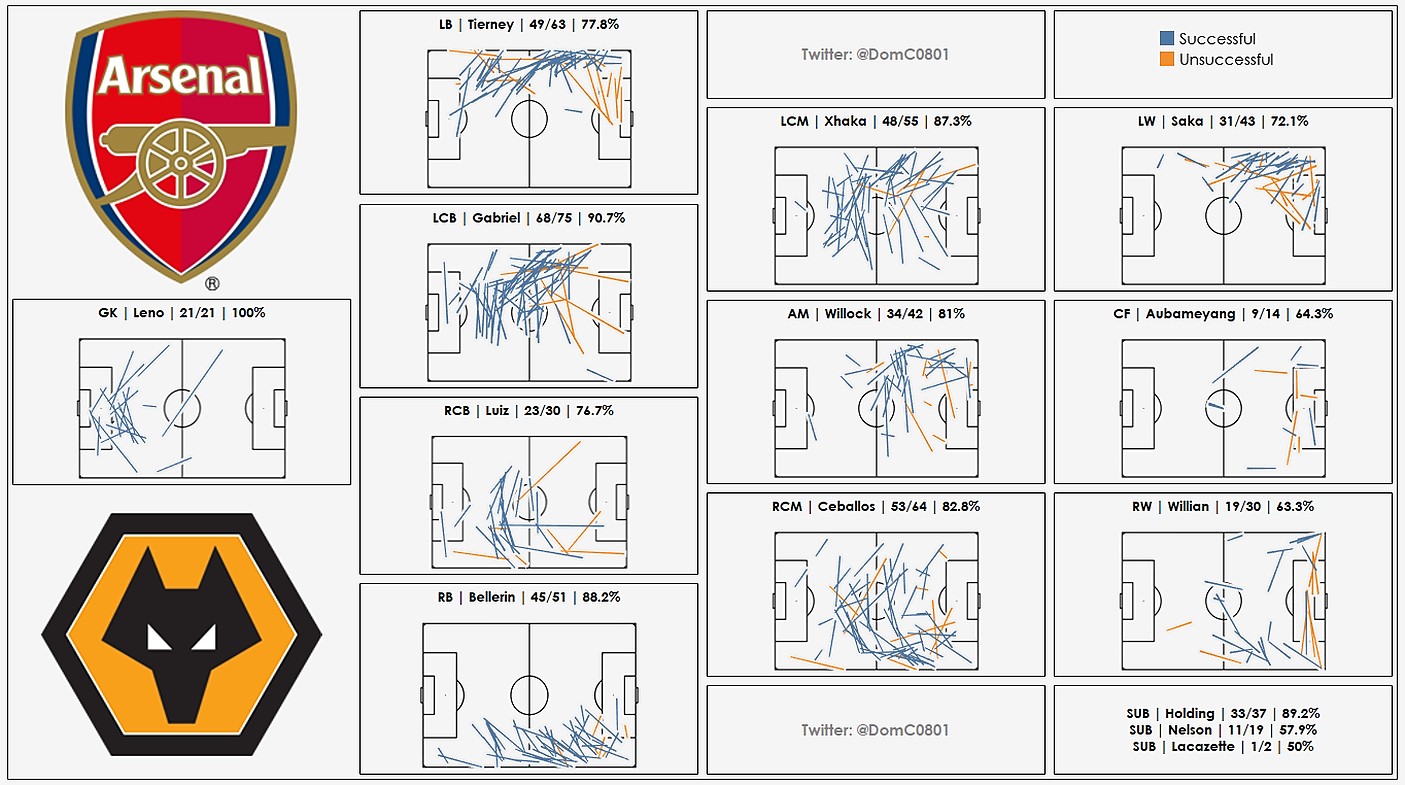 Above are the pass maps for each of the Starting XI. What is shocking is the complete lack of ‘Zone 14’ or ‘number 10’ passing. Wolves channeled Arsenal out wide and packed the penalty area with Arsenal attempting 36 crosses and only completing 3 of those attempts. 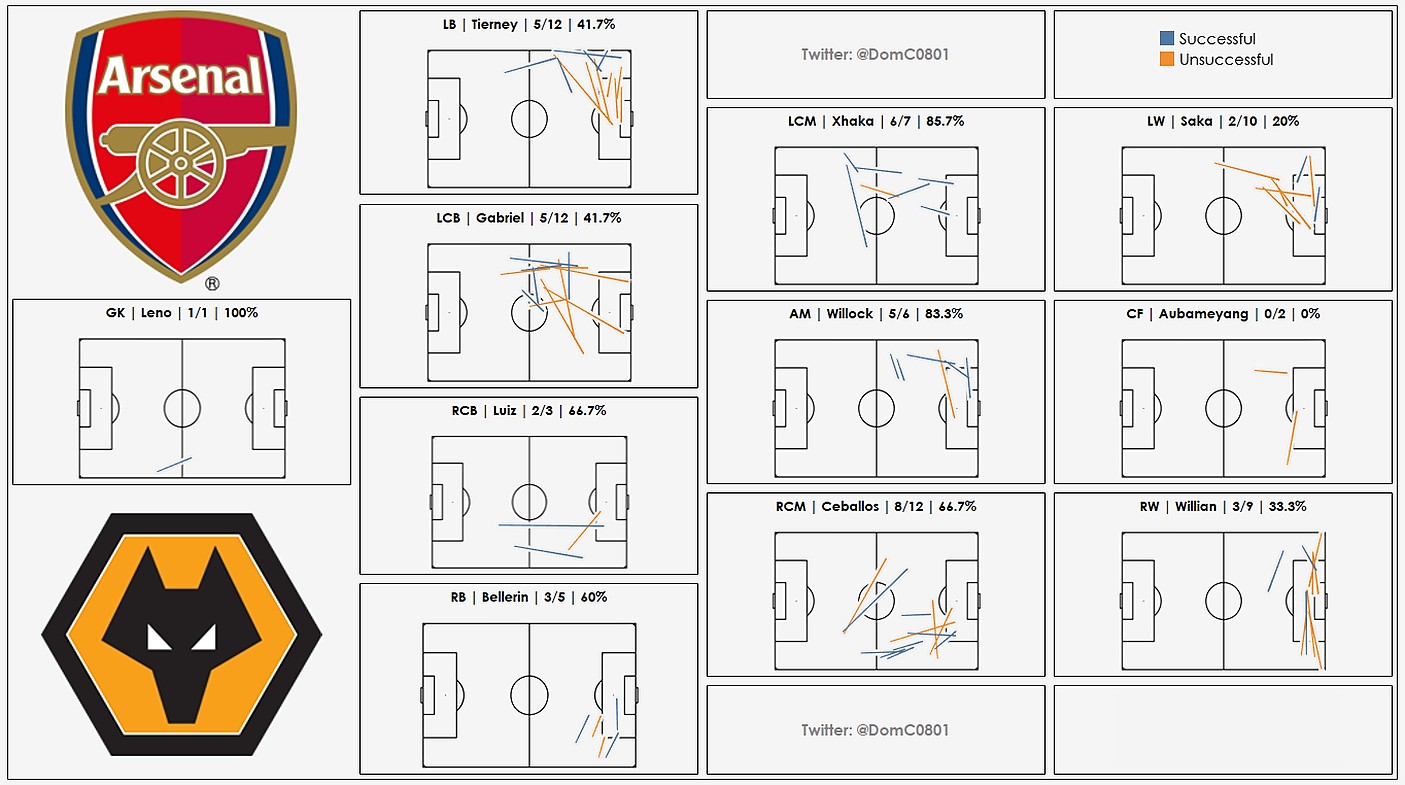 Above are the ‘Progressive’ pass maps for each of the starting XI. A ‘Progressive’ pass is one that results in the ball being at least 10m closer to the centre of the opponents goal excluding passes originating in the defensive third. Almost all of Arsenal’s ball-progression came from out wide with very few ‘Progressive’ passes coming from central areas of the pitch. This lack of central threat makes Arsenal a much easier side to defend against as Wolves just had to defend the width of their penalty area and focus on winning the aerial duels from Arsenal’s crossing. 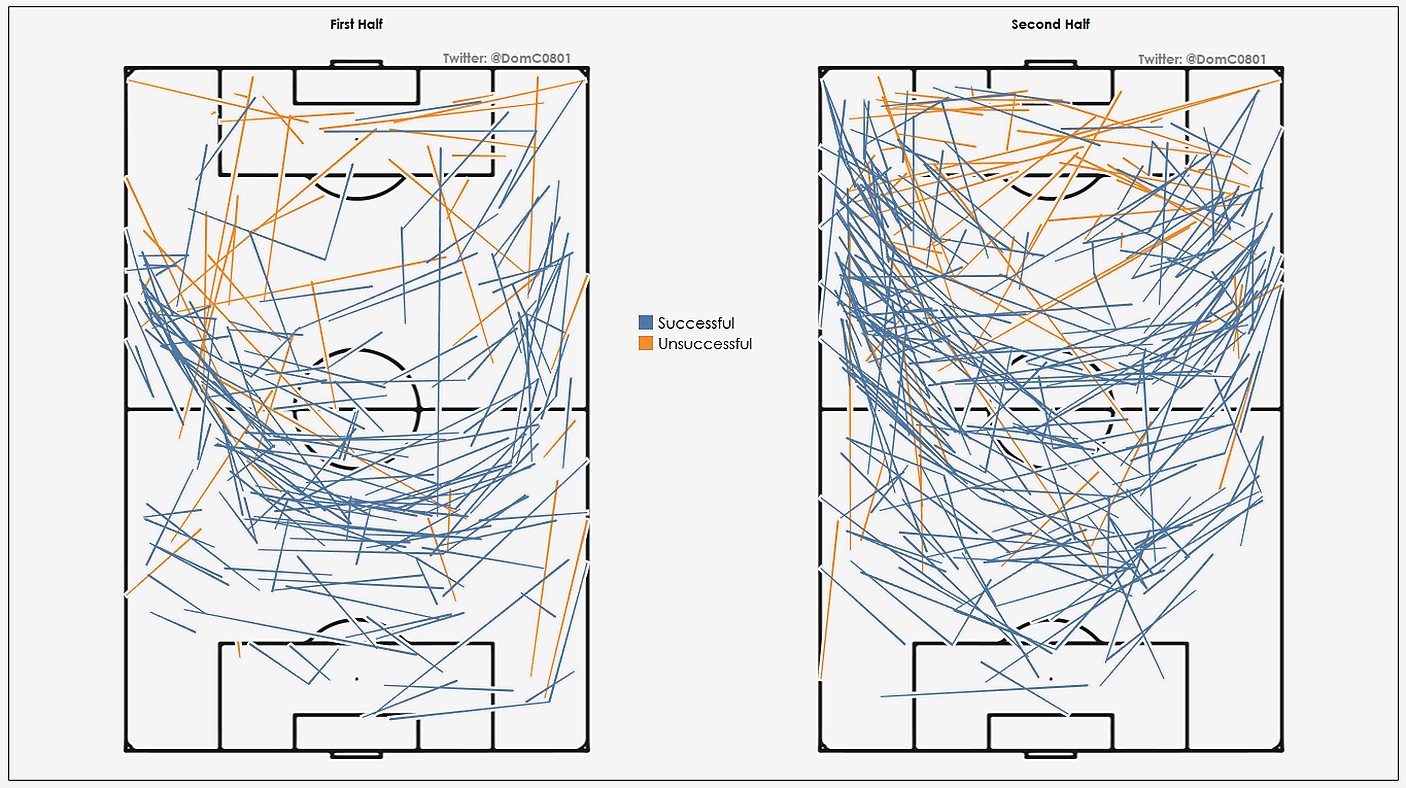 Above are Arsenal’s pass maps from the first and second halves. Arsenal were dreadful in the first half with our passes forming the dreaded ‘U-shape’ with little-to-no penetration except Willian’s assist for Gabriel’s goal. Arsenal improved a lot in the second half, with Wolves sitting off and encouraging Arsenal forward, but the lack of a central threat remained for Arsenal as that gap in ‘Zone 14’ (the area just outside the box that covers the width of the 6-yard box) clearly shows. 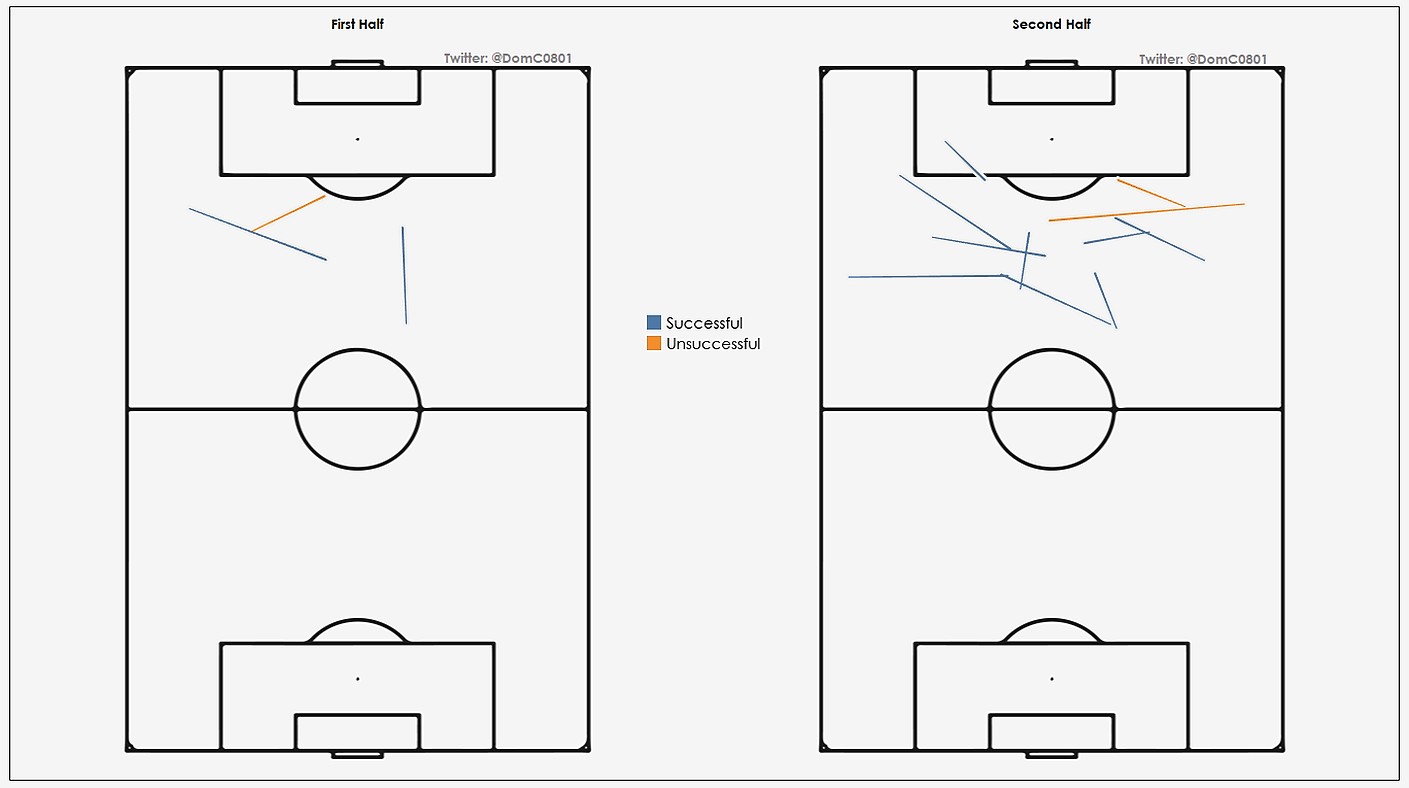 Above are the attempted passes into ‘Zone 14’ from both halves. Again this exhibits a complete lack of central threat with only 14 attempted passes into what is considered a key area for creating chances. This seems to me to be a structural problem, with Arsenal struggling to find someone capable of filling this space and also struggling to find players who can get the ball into ‘Zone 14’. I do wonder if Mikel Arteta will be forced to go back on his word and bring back a certain Öutcast when the registration window reopens in January. This problem is further shown below where we can see the passes from ‘Zone 14’. These passes, although there are nowhere near enough of them, show the importance of getting the ball into this space as most of the passes result in the ball ending up in threatening positions while the opposition defence must also push out to stop any potential shooting opportunities. 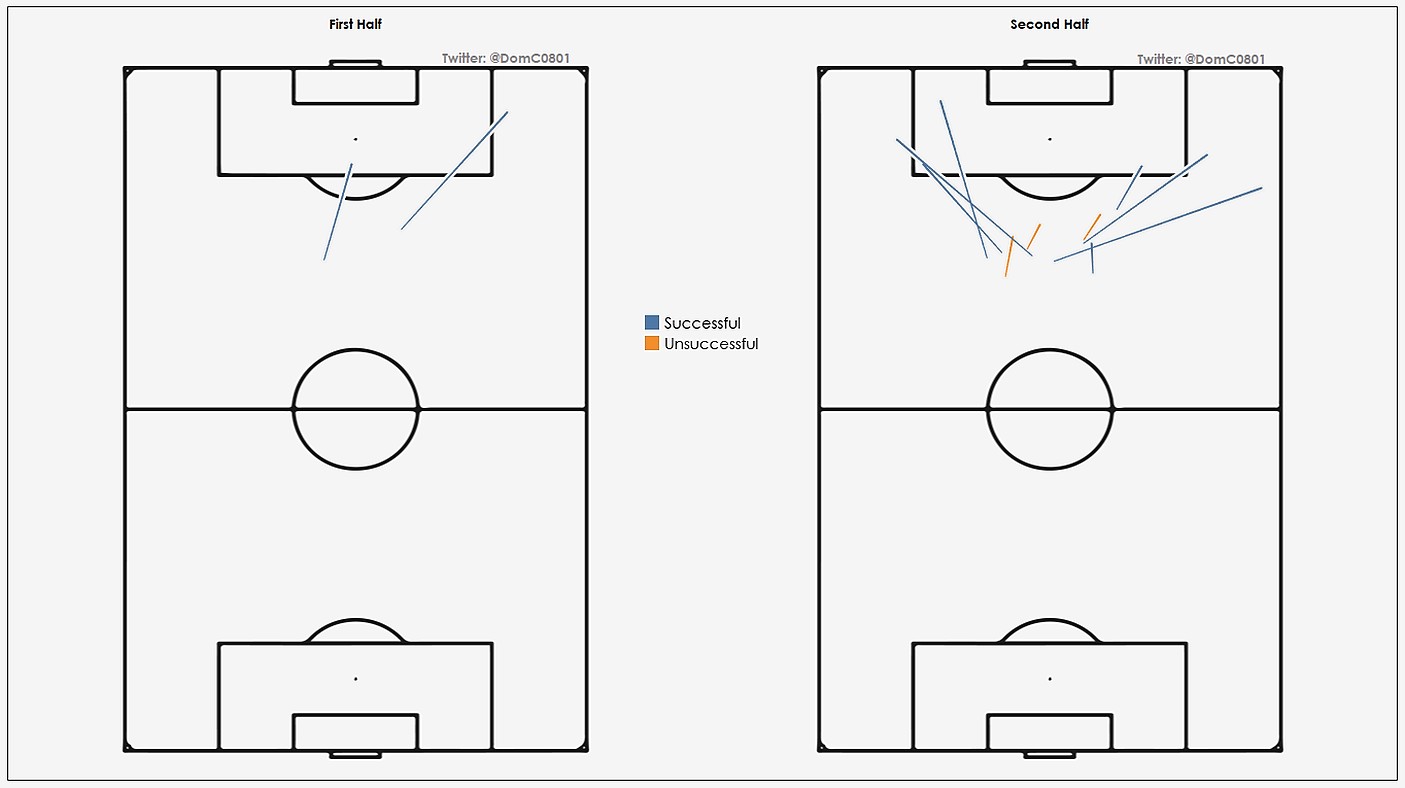 It’s another disappointing defeat which continues a worrying trend for Mikel Arteta (which Jon Ollington discussed in his brilliant piece last week), who will inevitably face a massive amount of backlash if there is another poor result next week against J*se’s side.

Anyway I’ll be back in the midweek to cover the sweet escape of the Europa League as Arsenal welcome Rapid Vienna (in front of the first crowd to be at the Emirates since a 1-0 win over West Ham in March), before travelling to N17 to face our North London rivals.

Data from Opta via Whoscored

Previous articleWillock and Arteta admit things need to change quickly
Next articleArsenal 1 – 2 Wolves: By the numbers

Arteta boosted by Arsenal energy ahead of...

Saka & Ramsdale up for Premier League...

That’s a relief, I thought you were just going to show a picture of a big pile of sh*t.

Still can’t work out why we have changed from playing pretty well in the second half of last season, to so poorly in the last few matches. Need a return to three centre backs?

Not for me Clive

No we just need to get Xhaka, Willian back out of the team, Elneny (or better still Partey, or both, Ceballos hasn’t been good either), and Nelson in, play a 4-3-3 and allow the players just a little freedom and FFS close the holes between the lines and play with some fucking tempo. Well removing Xhaka will go a long way towards the latter.

1. Less running after the Restart and that hasn’t changed since. Probably due to lack of athleticism of and fear of injury to substandard players. 2. The troubling underlying metrics have caught up with the 343 system, and the goals dried up, which leads us to… 3. The switch to the back 4, which is where Arteta wants to go, but the team is far from ready for. A Partey does not make a functional midfield unit. The team needs about £100m of investment in midfield alone: Szoboszlai, a DM and another CM/DM like Partey/Soumare. I had hoped AMN will… Read more »

So few passes to Auba. Seems other sides have worked out he is our only goal threat and are blocking him from getting the ball.

We rely a lot from attacking from wide positions, with no real targets in the box. Auba is a good finisher, but heading is not his strongest strength. when we keep going wide it allows our opponents an advantage. They keep packing the wide areas and blocking crosses, or isolating Auba. We really need to mix up our attacks and try some moves centrally. Right now we are too predictable, too slow, players dont move enough, every time Xhaka has the ball he turns and passes back. We need to go back to basics!

> every time Xhaka has the ball he turns and passes back

There was a sequence in the 1st half, where Xhaka got the ball on his left foot and was well positioned to start a counter attack, with multiple passing options up front.

I could only facepalm.

It is my opinion that Aubameyang is just as culpable for his goal drought as the squad and manager are. There were two instances in the game where I was really shocked by his demeanour. (1) Nelson, even with his poor delivery, finally played a great low-cross into the 6 yard area from the right wing. Auba, inexplicably stopped his run and made no attempt to reach that cross. He then moaned at Nelson, who obviously apologised. (2) Auba stole the ball from an unsuspecting Patricio. Instead of shooting into an empty net with his left foot, he kept dribbling… Read more »

Andy
Reply to  Salibaba and the Forty Thieves

i’m glad someone else noticed number 1. he really didn’t commit to getting on the end of that cross. his body language and work rate in general is very worrying in recent weeks. i love auba but, as a club, we really have to stop this nonsense with handing out fat contracts to players who are in decline. the odds are against most of those deals working out and we cannot afford to be gambling anymore. we have thrown countless millions down the toilet in recent seasons and we still have a squad that is a pig’s breakfast.

Salibaba and the Forty Thieves
Reply to  Andy

Couldn’t have said it better myself.

Thanks, very useful. I especially like the addition of the network passing map to show who pass to whom – and who doesn’t get passed at all. What’s puzzling to me is that Arteta and his coaching team must have access to all this and more and yet they can’t seem to fix what is the most basic of football skills, ie, passing the ball. Do you have anything to show how we waste corner after corner? Surely a team of highly paid professional players must be able to execute set pieces with more accuracy