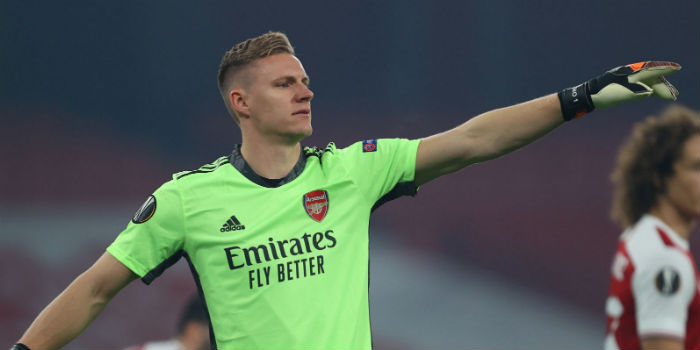 Under Arsene Wenger and Unai Emery, rotation of Arsenal’s goalkeepers for the cup competitions was something of a tradition. The club’s first-choice keeper would play in the Premier League and Champions League and the League Cup, FA Cup and Europa League were reserved for those lower down the pecking order.

Had Emi Martinez remained at the Emirates in the summer, we suspect Mikel Arteta would have implemented a similar policy to ensure both he and Bernd Leno were kept busy. However, with the Argentine moving to Villa and the Gunners taking a punt on Icelandic stopper Alex Runarsson as a replacement, the boss seems to be making his selections based on the quality of the opposition.

So far, that’s meant Runarsson, a €2 million signing from Dijon, has been limited to one game; the 3-0 win over Dundalk. The other 990 minutes, across three competitions, have been played by Leno.

After last night’s 4-1 victory against Molde, the boss hinted he’ll continue to make his selection on a game-by-game basis.

“In the main competition, Bernd is going to be our No 1,” he told his post-game press conference.

“Bernd has played a lot of games, he played with the national team as well and we decided it was the right game [against Dundalk] for Alex as well.

“He just joined us and needed some minutes and we believe that was the right call.

“In general, in this competition, Bernd is going to be there but if I have to rotate because I feel it’s the right thing to manage the squad I will keep doing that.”

Presumably, if Arsenal secure qualification on Europa League matchday 4 – a draw in Norway against Molde should do the trick – then Runarsson will be given the chance to play in the final two games of the group. Those games against Dundalk and Rapid Vienna might also be an opportunity to give minutes to the next generation from the Academy.

Having made his debut against Dundalk last week, there was no room in last night’s squad for Folarin Balogun. Emile Smith Rowe and Reiss Nelson, both not quite fit, also missed out. When available, it’s clear that squad selection is a headache for Arteta.

The boss insists that he’s committed to a long-standing club policy of giving youngsters a chance but that they must prove they deserve their place in the team.

“If you look at the numbers of how much the young players have played since I joined, I don’t think it’s a question that we can raise to ourselves,” he said.

“Eddie [Nketiah] was on loan, he wasn’t playing and now he’s playing. Bukayo [Saka] wasn’t playing the minutes that he is playing under me, the same with Joe [Willock]. Reiss [Nelson] didn’t play today because he was injured. If not he would have started the game tonight again.

“The good thing is that they’re not just young players so we have to give them the opportunity, they have to earn that right to play and they are doing that. That’s a really positive thing and how lucky we are to have this generation.

“We [have to] develop them in the right way and the right way sometimes is giving them the opportunities when they deserve it. If not they don’t play and it’s the best way for them to learn the standards that are required at this football club.

“If not then you are not good enough to play here. When they show it they have to start. We have a few examples of that and they start every week.”

On giving Balogun opportunities, he added: “Again, the chances will come with what they show us with their performances on the pitch and in training.

“The better results we have and the more clear we are in the group stages, obviously that opens the door a little bit more to give more opportunities to more players that deserve it.

“At the moment we still have some senior players that we cannot give them the time that they deserve because at the moment we have a lot of fit players.”

Arteta: We have to put the ball in the net

But why have two keepers on Bench is what I could not understand.

Europa League rules for Covid. Every team has to do it

That’s weird. Not like you are gonna test positive in the middle of the match FFS

And registering 5 GK for the EL while loaning two of them the day after, it’s covid too? No other team has done it.

3 of them are homegrown. Don’t count in the quota of foreign players.

So no, it’s not COVID. What else have “other teams done” that you wanted us to do or not do?

I don’t know what other teams have done, but I know what they haven’t. They haven’t signed Özil.

Tactics to exclude Ozil was part of it. I am not against it but I like to tell the truth.

Oh wait ..wtf it’s a rule???
3 goalkeepers for match day squad?
Who the fcuk came up with this?

Great to see such a sensible approach, now we’ve (almost) qualified, I’m sure arteta will take a few more risks with selection.

But with all the games played by Leno, he may get injured even though he doesn’t have to run or get into tackles. Runnarson will then be unprepared and not tested properly. This can happened at a crucial time in the league and EL.

“… the boss seems to be making his selections based on the quality of the opposition.” – a very sensible idea in the circumstances. For my money, Runarsson’s comments after the Dundalk game suggested that he was/is a tad too over-confident – never a good trait, particularly in keepers – so I suspect the manager wants to introduce him “carefully”. Glad to read that Arteta remains firmly committed to giving youngsters a go – we saw some results of that approach yesterday. It could present potential selection headaches along the way as the article mentions but, if managed properly (albeit… Read more »

You’ve really got it in for Runarsson haven’t you?

He did one interview where he stated he was proud to make his debut and he said he’d have to get used to games where not much happens for most of it but you need to still be alert.

I’m not sure how you get overconfident from that? Also, keepers like Szcz and Martinez are very confident people and it has only helped them in their careers.

Well, he only did one interview because he only played one game – you rarely interview subs. That aside, he said: If given more chances by the boss, Runarsson is expecting further group stage games to pan out in a similar manner. “I think that is normal playing for a club like Arsenal,” he said of the 63% possession the Gunners ended with. “We have the ball a lot and there are going to be a lot of games like this.” “… I think this is going to be the image of a lot of games for Arsenal.” That struck me,… Read more »

If Runarsson uses all LEGAL possession stats, we win EASILY.

So glad we have fans who are able to delve into the murky psychology of players who have been at the club five minutes and given one interview.

Maybe @Biggles remembers his first interview where he said he was a modern GK, good with his feet etc.

Time for Balogun to be given minutes ahead of Eddie to see what he can offer. At this point we know what Eddie can and can’t do.

Why? Eddie has scored three goals this season (in addition to several for England U21s). That’s the same as Laca and just one behind PEA. Why replace him with a callow youth player? I’m all for giving Balogun a chance in dead-rubber Euro games and perhaps the domestic cups–but there is no basis at all to replace a first team player with him. And I think Arteta sees enough of all his young players to make the right calls.

If you’ve watched Balogun play you’d see how much better he is at holding the ball under pressure and aerially he offers more.

I’m not suggesting Eddie doesn’t have role to play, I just think we should see more of Balogun at this point whilst the euro games are against lesser opposition.

the shit could hit the fan if leno gets injured

Are you saying Runarsson could be much worse than Leno?

because at the moment we have a lot of fit players.
— Don’t jinx it, Bro

It’s Arsenal…how could you ever jinx anything to do with injuries? …oh wait!