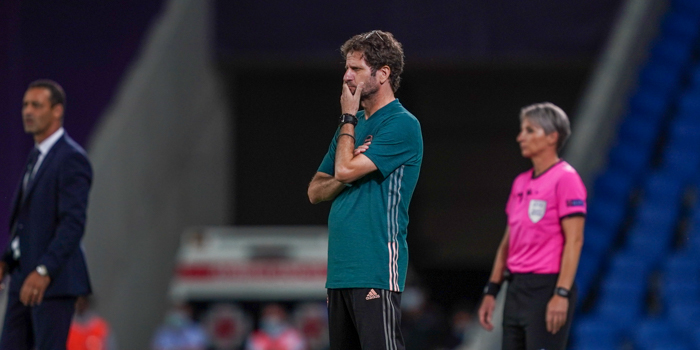 Arsenal will play Manchester United Women on Sunday, the first meeting between the teams in 14 months. Last September, the Gunners had to wait until the 89th minute for Danielle van de Donk to puncture a thick layer of United defence. This was only United’s second game since promotion from the Championship and they set up to frustrate the defending champions with a deep block and a 451 formation.

Since then, Casey Stoney’s side have added the likes of Christen Press, Tobin Heath and Alessia Russo to the squad, while Leah Galton has found form on the left-wing. Arsenal boss Joe Montemurro is expecting United to provide an additional attacking threat on this occasion, allied to their solid defensive structure. “They’re very dynamic going forward and they isolate you out wide with very good wingers, especially Russo and Tobin Heath,” Montemurro tells me.

“They’ve got some really good players in one-on-one situations and it’s added another dimension to their game. They’re a very good team and we are expecting a very difficult game. The context is a little bit different this time, last time we had just travelled for an away Champions League tie and there was a quick turnaround. I had to rotate the team a little that night so it’s slightly different this time but they are an exceptional team that have invested very heavily and it is showing in their league form.”

“I think they’re the top three or four teams at the moment. They’ve proven it – they’ve done it on big occasions, big stages, and have recruited world-class players. Every game that I’ve been involved with – it was a Conti Cup semi-final we went 2-0 up at Borehamwood and then they scored and made it very hard for us to get through, and obviously last year’s scenario, where we played them away and had to be patient and win the game at the end, so we’re expecting nothing but a very, very, very difficult game from a team that’s improved and is expected to challenge for the top three, top four this year.”

As well as Heath, Press and Russo, United already had exciting teenage forward Lauren James in their armoury. James left Arsenal in the summer of 2018 to join Casey Stoney’s newly created United team. Joe explains that the promise of game time was very much at the heart of Lauren’s decision to leave North London.

“We had a conversation with Lauren and she was in a position where she knew she would be guaranteed more playing time at United and she knew she would have to fight with our resources in midfield so she made a decision to move on. We still wish her the best and hope that she reaches the heights she is capable of with her talent.”

With United’s boosted attack since the last meeting between the teams, the Arsenal goalkeeper, whoever it is, might be a little busier than they were last September. Montemurro has a policy of rotating his goalkeepers and handed teenager Fran Stenson her debut between the sticks against London City Lionesses on Wednesday evening. Australian ‘keeper Lydia Williams has yet to make her debut after suffering a foot injury in pre-season.

The Arsenal coach has previously talked up Williams’ big-game experience as a principal reason for her signing. Manchester United and Chelsea await in Arsenal’s next two matches but Joe suggested she will still be monitored fitness wise before making her bow, “She’s getting closer, she had a little setback in training with a small injury that affected her kicking a little bit, but in terms of overall fitness she’s been fine. We’re just erring on the side of caution but we hope that very, very soon we will be able to put her into some sort of game scenario.”

Arsenal play away at Manchester United at 2.30pm on Sunday and the game will be shown live on the FA Player app and will be available worldwide, free of charge.

I consider United (on the up) more of a threat than City (on their way down) these days. If we had to play United immediately before Chelsea it would have been better at home.
I’m with you on Russo, she looks top quality and should easily make the Lionesses team for the Euro’s.
What shall be interesting is what will happen to the teams loaded with USA World Cup winners once the Federal season starts up again? Our signings are European and here to stay!

Well apart from the Ozzies obviously but they’re not rushing home anytime soon either, I warrant!

Incidentally, Tim. The FA Player app is still advertising our game as a noon kick-off but I suspect you are correct rather than the “official” website!
Why would the FA want Arsenal vs Man U to kick-off at the same time as Chelsea vs Everton?

Besides Lotte Wubben-Moy and Leah Williamson, how many academy players have left under Montemurro?

Tim Stillman
Reply to  Salibaba and the Forty Thieves

Aside from the ones that have gone to the US college system (which there isn’t much the club can do about really), Ruby Grant- not playing at West Ham, Mel Filis at London Bees, Silvana Flores yet to see a match day squad at Chelsea and Lauren James.

Ruby doesn’t really count for the Hammers because she left to join the US college system. What I don’t understand is how she found herself in East London when the transatlantic move was stuffed by covid?
Why didn’t we give her a temporary contract it’s not like we mind players returning from elsewhere?

Viv the 🐐
Reply to  Salibaba and the Forty Thieves

The thing with young players laying is very often to think with: Coul they have developed at the same rate, the same amount at the “bigger” club, or the one with more competition?
I can’t really judge in this case. But it is always my thought with players developing at other clubs. Up The Arsenal!