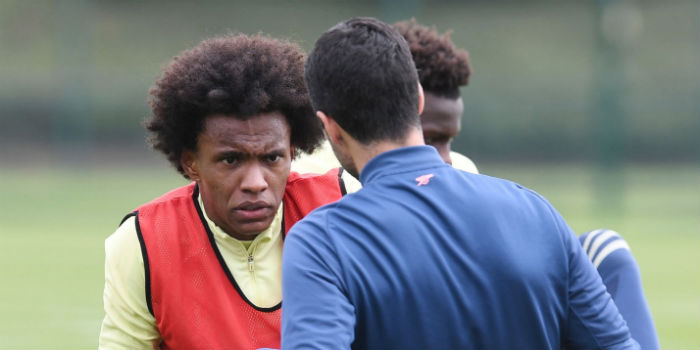 Mikel Arteta has confirmed that he’s spoken to Willian about his decision to jet off to Dubai during the Interlull despite a government warning against all but essential foreign travel.

The Brazil international is understood to have tested negative for Covid-19 on his return to London which means he’s likely to be part of Arsenal’s squad for Sunday’s trip to Leeds, however, it’s fair to say the unnecessary risk taken by the summer signing did not sit well with the club.

Asked about the situation, Arteta seemed to be in the mood to forgive and forget, pointing to the fact that Covid-19 is testing the mettle of footballers as it has everyone else. Willian is said to have justified the trip by claiming he had image-rights-related business to take care of.

“We had a conversation and I explained what I expected,” the Spaniard told his pre-Leeds press conference.

“There are a lot of personal factors at the moment and as well from our side, we need to be in their shoes.

“A lot of players are having different issues, like any person out there and sometimes they make decisions based on the needs of the moment, or what people are expecting from them.

“Whether they are right or wrong, it’s a thing that we have to discuss. But it’s been dealt with in the right way so let’s move on.”

He added: “Whatever happens internally with any issues or things that we don’t expect, as always we will try to resolve them internally. That’s been dealt with and explained, and we move on.”

Arteta is equally keen to move on from the bust-up between David Luiz and Dani Ceballos that made headlines. While the latter declared The Athletic’s exclusive to be ‘fake‘, the boss hinted that a run-of-the-mill training ground coming together had happened and that everyone has since moved on.

“Training is very competitive and issues happen a lot of the time, but those things get resolved immediately within the team,” he said. “There’s not much to say.

On whether there’s any lingering animosity, Arteta confirmed there’s, “no problem at all” before channelling his inner Arsene Wenger by stating, “I’ve got a really bad vision from far away! That’s why we train behind closed doors.”

When i read the headline i thought we sold him…

Funny how a photo can age someone.

No, that’s fear in his eyes.

Sorry, I thought it was a hit.

Taking your wishes for reality?

So he is back at Chavs now?

Funny how the club has no issue leaking financial (and confidential) information about Özil’s contract ad nauseam to the press. And now after Borges broke the sanitary rules, all is fine, the issue has ben treated internally and the press and fans can move on.

Well Arteta can’t very well play his favourite if he calls him out publicly can he?

Xhaka tells fans to fuck off.
He gets clean slate.

Ceballos fights twice with team mates.
He is competitive.

Guendouzi tells Maupay something about his salary after injuring Leno.
Expelled.

It feels like double standards, isnt it?
At least if I were Matteo I would feel like it

His previous manager has said that Guendouzi is trouble. Two different managers have had issues with him at Arsenal. It isn’t just what happens on the pitch. It is also how he trains and his overall attitude.

Ceballos also had issues with Zidane.
Xhaka with his discipline (see red cards)

What I am saying is that attidute is not a problem.

We should find a way to channel Matteo’s energy to the correct direction.

He is a good asset.

He also had a fall out with Arteta in Dubai when they were away on a training camp thing.

Xhaka has only received 2 red cards whilst playing for Arsenal and the last one was in 2017. That seems to show me that he is far more disciplined than many other players.

Once they stick a name to you, the very little you do is interpreted differently. I think Guendouzi suffered from that.
Ceballos too has a bad temper, at least a problem of self control. He was controversial in Spain, fighting, spanish regional nationalists on Twitter.

No mate. It’s one thing to be super competitive on the training pitch. Xhakha as a human being had reached a breaking point at that time.
What Matteo did was utterly classless. Good thing he’s still young and can learn from the incident.

Guendouzi didn’t get shipped off because of what he said to Maupay. It’s what came afterwards with his refusal to conceded and apologize. Challenging Artetas authority got him made an example of.
Ceballos got carried away with emotions but in both cases, critically, he made up right away.

It was more than one incident with Guendouzi and it is a shame. However, in reality he was another Arsenal midfielder with 0 goals and 1 assist in 57 Premier League games. You can’t go causing trouble if you are not getting results.

As for Willian – he must be on thin ice with such low performance issues too.

Very true! I have always maintained the whole thing with Matteo was about freeing a spot and money for a new midfielder. I love having Partey but the communication ploy was wrong.

After looking at William’ performances, feel Ozil would have done better than Willian.
In fact if we wanted a 32 year old attacking player who is inconsistent, we already had the better one – no need to buy another one.

Hindsight often is 10/10..but yeah, so far the gamble taken on Willian seems to have failed. Still a long season ahead for him to pick up form.
Also, are you THE Baichung? I’m from India too!

You are right about hindsight, but it was a very strange signing that too for 3 years. Anyway, can only hope Willian puts in better performances.
I am not The Baichung 🙂 but am from India.

Things are easy if you are one of the undroppables.

I am a little surprised by the anti-Arteta tone of so many of these posts. To be clear, I admire Ozil much more than many (and think the club has behaved very badly), I think Aubameyang should be played in the middle, I think Willian has played badly and that Pepe needs a run of games. Even so, I support Arteta, I see lots of promise in his adding structure, coherence, and steel. I like what he has done with players like Xhaka, Mustafi, and Luiz, important for the short-to-medium run. In the long run, I think Tierney and Bellerin,… Read more »

Great, that means our signing of the season will start against Leeds and he’ll again impress with his attacking creativity in the final third

Hopefully he will take to heart whatever Arteta has said to him and will buck his ideas up a little bit on the pitch. That’s the only place you can truly prove you deserve your place in the matchday squad.

1)Xhaka, as some one rightfully pointed out has only had two reds. yet many prefer to invent myth (see AFTV). He was aggravated into a situation by toxic fans and rather unnecessarily. The same sort of sentiment generally drove negativity against Flamini, Mustafi, Wenger whilst letting other ‘favorites off the hook. Currently there is a myth that Auba is better in the middle and the criticism is on Laca when he has scored more than Auba this season and when Auba had no trouble last season running into the ball from left (provided by Xhaka or Saka or Tierney) to… Read more »

So much for the non-negotiables…