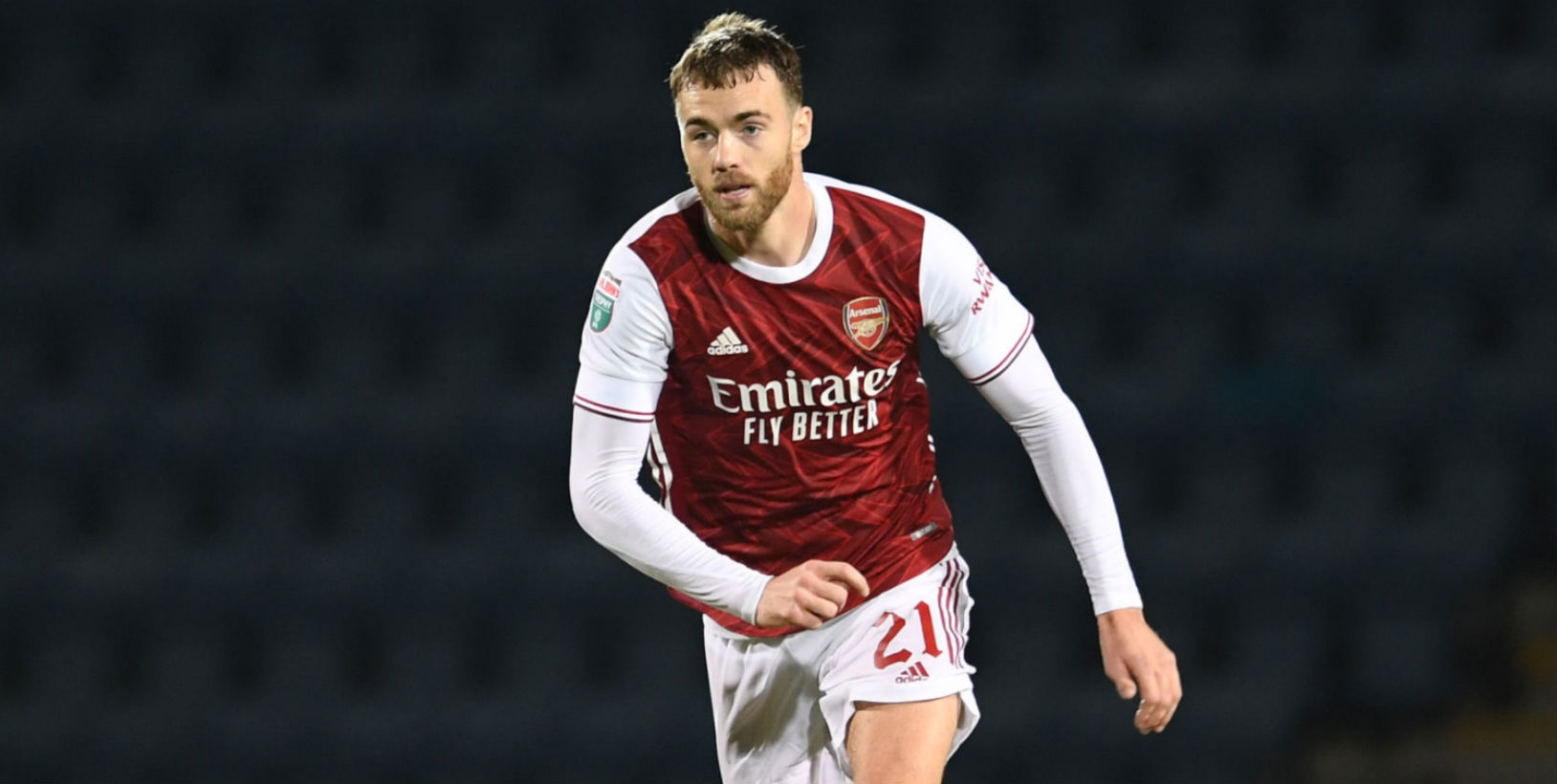 Calum Chambers is a step closer to a first team return after playing his first competitive minutes in nearly 11 months.

The 25-year-old paired up with William Saliba in the centre of defence as Arsenal’s under-21s beat Gillingham 4-2 on penalties in the newly rebranded Papa John’s Trophy after drawing 1-1 over 90 minutes.

You may or may not remember that this is the competition that pitches senior sides from League One and League Two clubs against ‘Academy teams’ – with Category One status – from both the Premier League and Championship.

Chambers, who injured his ACL in last December’s 2-1 defeat to Chelsea, was on the pitch for the first 45 minutes before being replaced by Levi Laing.

In the shootout, Matt Macey made a save and Gillingham also hit the post, while Balogun, Moller and Cottrell netted. Cirjan then finished things off with a panenka.

So happy to score the first goal of the game and to score the decisive penalty! A great performance from the team to win the group! Thanks everyone for the messages! The hard work continues❤️ #AFC #COYG pic.twitter.com/wPKvz9bRSe

Well done to the under-21s and a thumbs up for Calum. Good to see you back.

Chambers and Partey call on Arsenal to heed Hammers lesson

Do we know how ESR performed? I’d really like to see him tried in the first team.

He did not have much influence on the game from the report.
No goal, no assist.

Totally agree with this. He scored twice in the previous game and was very good – apparently. He could provide the goal scoring and creativity we need.

Glad that Chambers has recovered from his very serious injury. Just how much he’ll contribute if/when he gets back into the squad remains to be seen. He was improving (albeit from a pretty low base) prior to injury but, overall, he’s not lived up to expectations. However, he’s certainly not alone in that in the Arsenal squad – which is partially why we’re in the mess we’re in – so we can’t be too harsh on him.

I honestly think Chambers may look at his time at Arsenal as time wasted. We have never been able to provide him with consistent game time in a settled position. Really feels like his development has been curtailed as a result. Is anybody any the wiser as to his quality than we he was signed?
Hopefully we can see him get back to fitness and form quickly and at least oust Mustafi from the match day squad. I’m sure he is a good player at CB if given the chance and a decent partner like Gabriel

Yes, there’s some truth in that. It started badly as Wenger literally threw him in at the deep end (CL etc.). In hindsight, a pretty bizarre decision from someone lauded as a very good “man” manager. Even accepting that, we are where we are with Chambers and the rest, and we have to be honest when appraising their overall performance. Given the mess the side is currently in, we have to really. I hope Chambers is given game time so that we can see what he can do, no least post-long term injury as that can be a very tricky… Read more »

Whatever you may think of Mustafi, Chambers is much worse – I really hope he’s not the one to oust Mustafi, as you say. Pundits don’t point out Chambers’ cock-ups because he’s British, but they do go on and on about foreigners’, and so fans get influenced by those “experts”.

chambers over mustfai any day.

He was our best performing defender last season up until his injury. And not in the sense of “not as terrible as the rest” either, he was just plain good if not great whenever he played either at fullback or centre back. On the face of it, he’s 25 (about the same as Kos when he joined from Ligue 2 and), he’s played more first team minutes at elite level than Holding still and Koscielny at the same age, he’s coming into a side with 3 centrebacks in Luiz, Mustafi and Sokratis who are going to leave the club in… Read more »

I hope he does get game time. I’m just not convinced that, overall, he’s up to the standard required (and what we require even more currently). We’ll see.

I think Holding has done well lately to call it just “blowing hot and cold”.

Might sound harsh but I think it stands up to scrutiny. He was great away at United, arguably instrumental. Dreadful against Villa, untested by Fulham, shaky against West Ham and unconvincing away to Liverpool. If you say, alright the Liverpool and Villa games were poor overall team performances so let’s not call him out there (even if he won’t personally look back on them fondly either) then that’s still just the one very good game and two essentially indifferent ones. It’s not to shit on Holding as much as it is to say he hasn’t shown the kind of performances… Read more »

Is holding fasting the chamber’s, I think probably a bit faster , which has been one thing chamber has lacked at times

His time at Fulham was also very productive.

What on earth…
The Papa John’s Trophy sounds like a fun-sized trophy given to you for beating the in-house restaurant record for fastest devouring of the Pepperoni Plus-size Pizza Special!

Dave cee
Reply to  A Voice in the Noise

This is not a joke. I was in a bar the other day where to beat the house you had to drink 10 bottles of beer in 90 seconds!! I couldn’t even do 2 properly in that time. To top it off, they had a special comp – 1 CASE of beer, 3 pizzas and sides in 6 minutes. The prize? Don’t pay for what has just made you vomit all over the place and possibly put you in an ambulance.

Obesity rate high in that bar?

Salibaba and the Forty Thieves
Reply to  Dave cee

This is a lawsuit waiting to happen

Can you pour the bottles into a glass before doing it first?

I thought you were taking the piss with the Papa John’s Trophy thing. Just goes to show that you don’t need to joke at the the FA’s expense. They do that quite well enough on their own

I think I prefer the lockdown (not been able to get to the barbers) look to the “give me the full Phil Foden” chavtastic one.

Isn’t that exactly what was done? $27 million spent on a very young, raw CD who “might” contribute to the first team?

No prizes for guessing what m.o.t.m gets in this competion

Hatem Ben Arfa would have loved this trophy.

Does anyone know where it is possible to watch these games? streams etc.

Also does anyone know how Saliba is progressing? He have played a few games for U23 now..

Really glad to see Chambers back in action!

Welcome back to the pitch Calum!
Can’t help feel that he has a lot to offer.
Trusted by Fulham as a DM…… and playing really well as a CB for us before this injury.

I think Chambers would appreciate it if you kept quiet that he was trusted by that Fulham side – not something to brag about.

Highlights can be found on YouTube — Saliba had a nice (though entirely unpressured) dribble well into the attacking half before putting a sweet through-ball down the left side, where it was crossed into the box; the defender made a mess of it allowing Cirjan to pounce.

The goal we allowed came on a ball that beat the FB at the back post. Saliba wasn’t involved in that one; he had a nice intercept and a clearance elsewhere. I don’t think Chambers showed up on any of the clips.

That is very good news. Long season, we will need all hands (and feet) on deck. Hoping that Martinelli is not too far away from action as well. We could use him on the left!

Slightly off topic as thes post is principally about Callum Chambers, butas he was mentioned above, felt compelled to say that we have a real find in Cirjan. This boy is something special too. I am a brit gooner, and have been all my life, but have lived in Romania for quite some time, and in the next village to Domnesti which is the club he came to us from, so saw him in action for a while prior. Thought I would just share that with others who may not know too much about him; one for the future for… Read more »

Not really tbh. Domnesti is a small town of about 8k poulation, and the team is in something like the eighth tier of the football here, but a fair amount of 11 to 15 yr olds in Romania full stop, do have technical ability that I didnt really see when I was in the UK, so some do make it, for instance Hagis son, who is now at Rangers. Main problem is money, sponsorship, etc, and therefore a fundamental that would complement ability.

This Cirjan kid is actually good. Along with Ben Cottrell

What is going on with this George Lewis lad? He is nowhere to be seen, is he injured?

Time to prove the doubters wrong Callum. I have always thought he was tidy and assured on the ball. Versatility is good in the modern game as well. I assume he qualifies as home grown under the rules as well?

Great news. Need him back in the First Team squad ASAP. And Mustafi a notch further down the pecking order.

This website uses cookies to improve your experience while you navigate through the website. Out of these, the cookies that are categorized as necessary are stored on your browser as they are essential for the working of basic functionalities of the website. We also use third-party cookies that help us analyze and understand how you use this website. These cookies will be stored in your browser only with your consent. You also have the option to opt-out of these cookies. But opting out of some of these cookies may affect your browsing experience.
Necessary Always Enabled
Necessary cookies are absolutely essential for the website to function properly. These cookies ensure basic functionalities and security features of the website, anonymously.
Functional
Functional cookies help to perform certain functionalities like sharing the content of the website on social media platforms, collect feedbacks, and other third-party features.
Performance
Performance cookies are used to understand and analyze the key performance indexes of the website which helps in delivering a better user experience for the visitors.
Analytics
Analytical cookies are used to understand how visitors interact with the website. These cookies help provide information on metrics the number of visitors, bounce rate, traffic source, etc.
Advertisement
Advertisement cookies are used to provide visitors with relevant ads and marketing campaigns. These cookies track visitors across websites and collect information to provide customized ads.
Others
Other uncategorized cookies are those that are being analyzed and have not been classified into a category as yet.
SAVE & ACCEPT
wpDiscuz
42
0
Would love your thoughts, please comment.x
()
x
| Reply