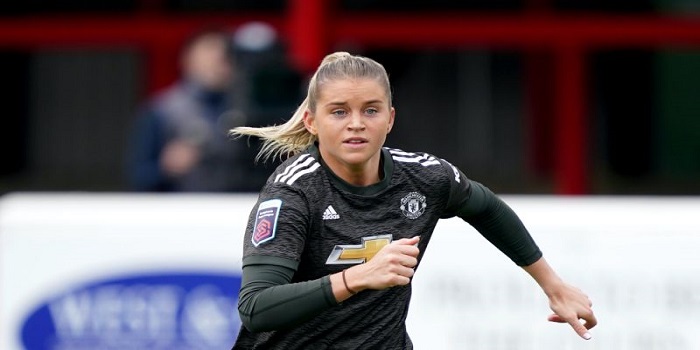 Arsenal manager Joe Montemurro says his side were interested in signing Manchester United striker Alessia Russo earlier this year. The Gunners did sign Russo’s North Carolina teammate Lotte Wubben-Moy with Russo signing for Casey Stoney’s team. In response to a question from Goal.com’s Ameé Ruszkai, Montemurro admitted he came close to tempting the forward to come to North London ahead of the clash between Arsenal and United tomorrow afternoon.

“We had a very good look at her at the start of this year and I had many conversations with her,” Joe revealed. “I think she’s a talented player, not only for United, but also a talented player for England and she has something different in terms of very good technique, very good football understanding in her positioning. She’s obviously done very, very well and like three or four of the players in their top third, we have to be very, very careful.”

The Gunners boss said that the deal didn’t materialise due to uncertainty over the situation with the college league stateside. “She was very interested and it was very, very sketchy because they weren’t sure how the NCAA was going to finish in the U.S. It was was bound to start then it stopped and then they they started it again and then they canned it and then all of a sudden it was a big rush to get players signed. Unfortunately with Alessia, we just weren’t in a position at the time to do it, to bring her in and she obviously found a solution at United. All credit to her, she’s doing very well.”

Excellent player that would have been an asset to us but I didn’t realise Joe was interested.
My only concern is it sounds like she is keen on the Stateside league system so is she going to be another that runs back to the USA as soon as their football begins again?
We are building a team to be strong well into the future with planned succession and players that disappear after 6 months, or even a year, are not the ones we should be signing.