Arsenal 4-1 Molde: By The Visuals

Arsenal continued their 100% start to the 2020/21 Europa League campaign after overcoming an early Molde goal to end up comfortable 4-1 winners over Norwegian champions Molde. Victory means that Arsenal can qualify for the knockout stages in 3 weeks time if they better Rapid Vienna’s result.

Let’s delve into the data to see if we can gain some more insights from Thursday’s game. 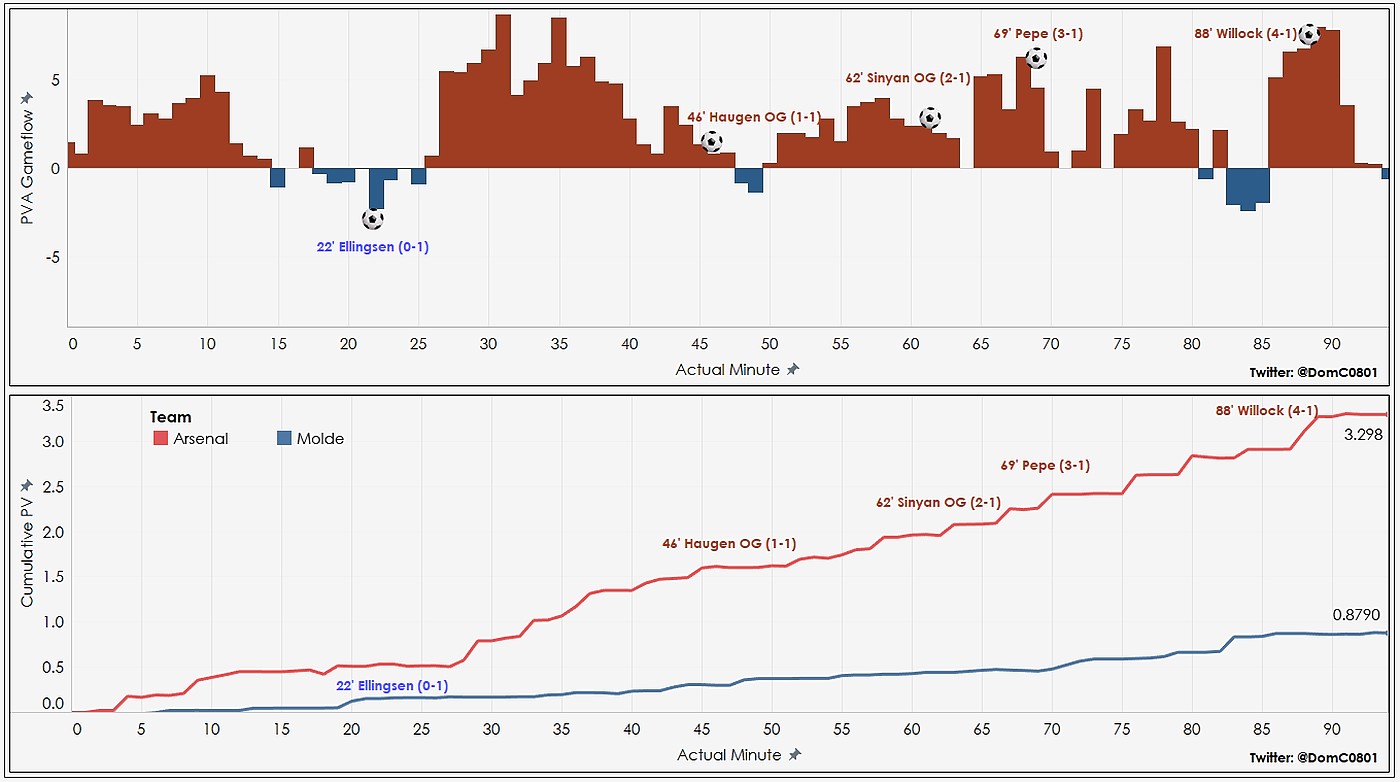 Above we can see the Possession Value Added (PVA) Flow and the Cumulative Possession Value (PV) for Thursday’s game. As we can see Arsenal dominated the game pretty much from start to finish, with Molde’s goal coming in one of their few spells of threatening possession. It is also positive to see Arsenal continuing to put pressure on opponents even when we have a comfortable lead, as this season we have seen Arsenal’s attack peter out after the 70th minute in most matches. 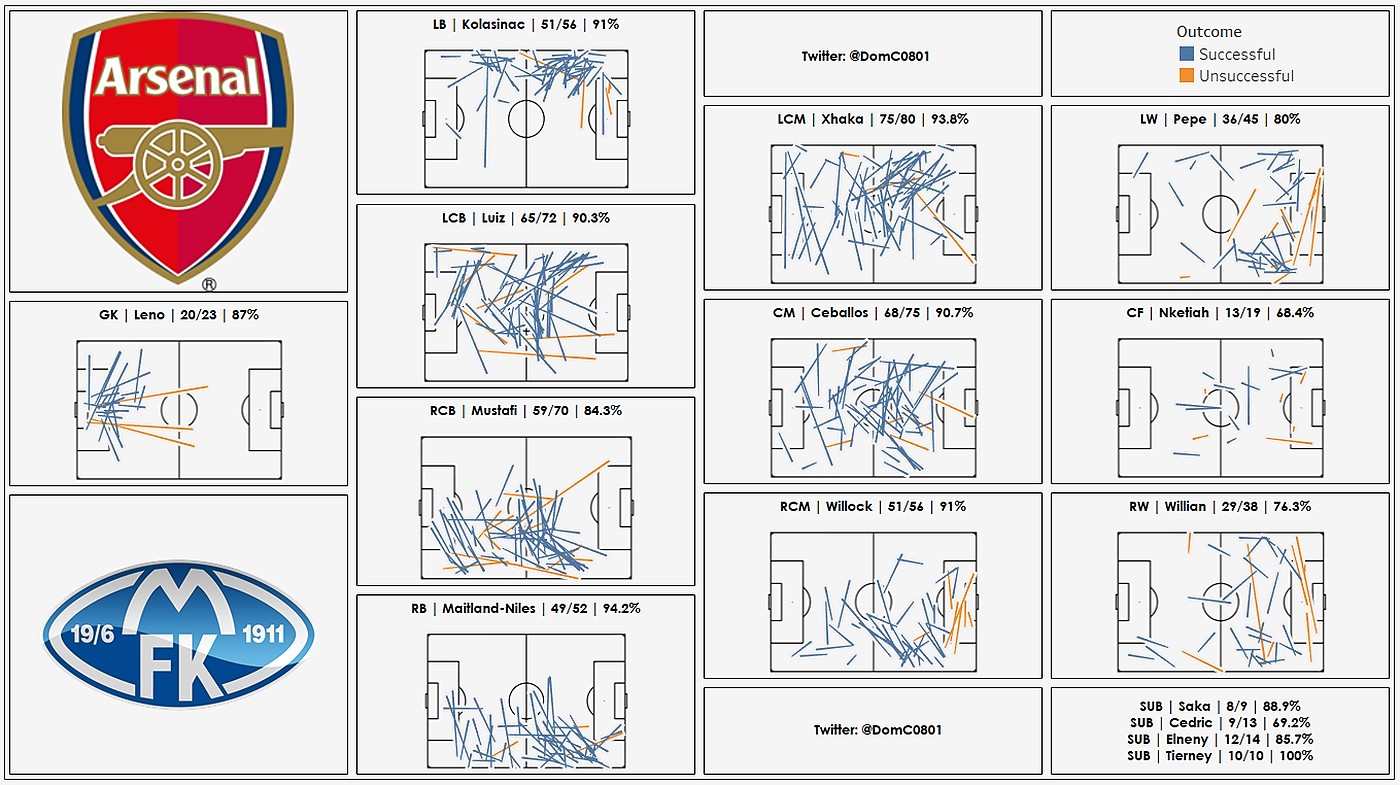 Above are the Pass Maps for each of the Starting XI from Thursdays game. Arsenal’s midfield largely controlled the game, with Granit Xhaka and Dani Ceballos dominating the ball. Eddie Nketiah struggled to get involved in possession while Willian and Pepe switched sides frequently as both struggled to make an impact in the first half. Pepe saw far more joy when Bukayo Saka came on as the Ivorian was able to play on the right with Saka given the responsibility of linking midfield to attack giving Pepe more freedom. 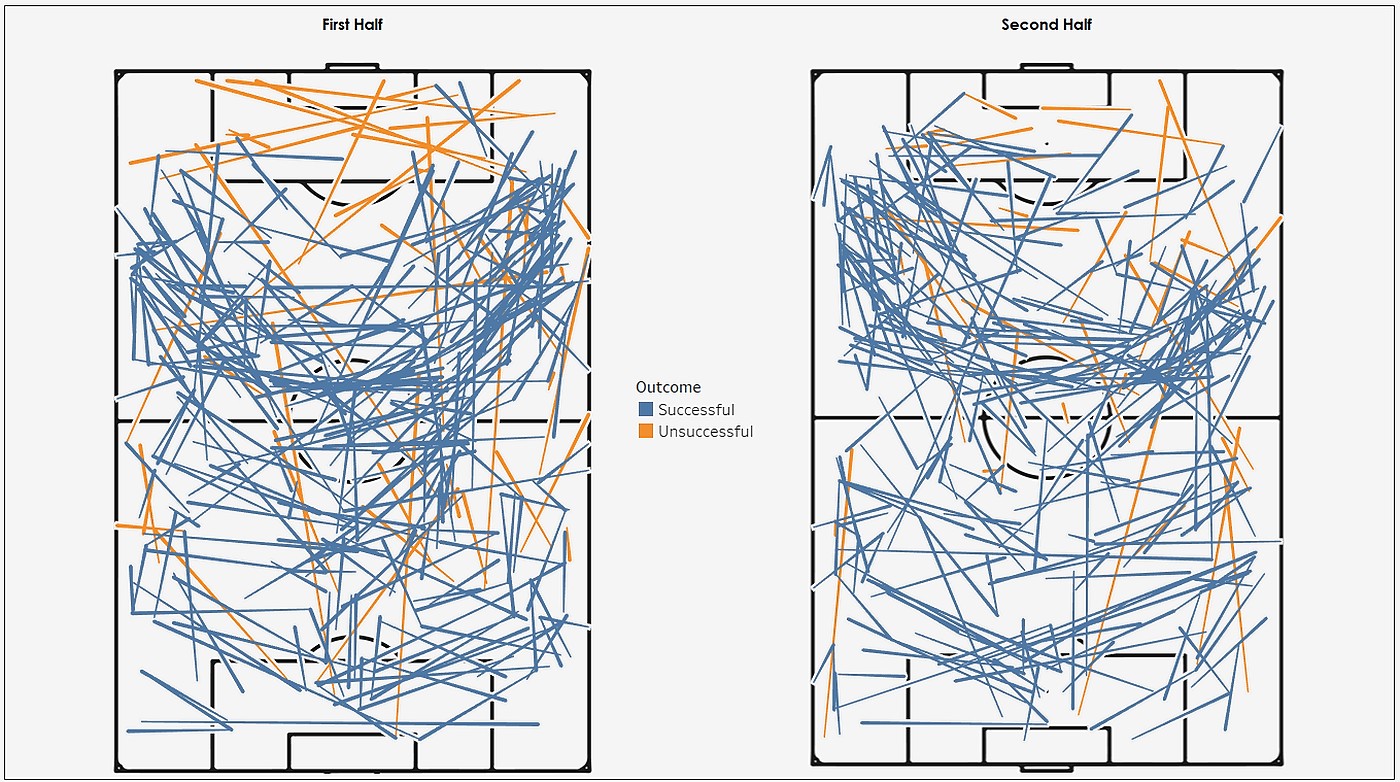 Here are the pass maps from the first and second half. What we can see is the switch from a right-side bias to a more of a left-sided bias in the second half, coinciding with the introductions of Bukayo Saka and, later in the game, Kieran Tierney. 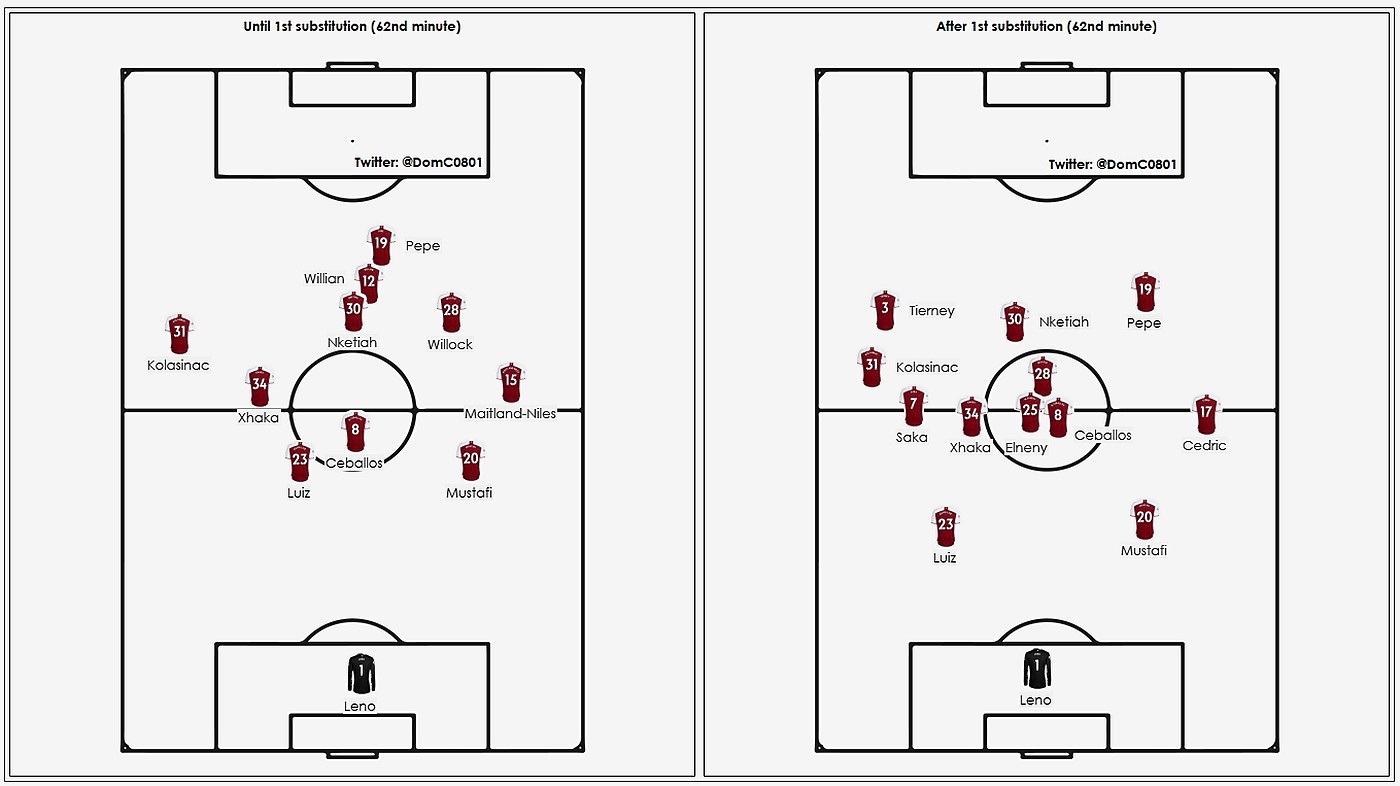 Above are the average touch position maps before and after the first substitutions (Cedric and Saka on, Maitland-Niles and Willian off) were made. What is notable is how much further up the pitch Sead Kolasinac got in comparison to Ainsley Maitland-Niles and Cedric Soares. This could explained by the presence of Granit Xhaka who could cover the space Kolasinac left behind, with Maitland-Niles not given the same freedom as Willock pushed on from his RCM role.

Above are the PVA scores for each player from Thursday’s game. David Luiz leads the way with his two long passes into the penalty area from his own half being a large reason for that. Encouragingly, Nicolas Pepe was able to threaten with his passing as the Ivorian played a role in the first goal as well as assisting the last goal, scored by Joe Willock. 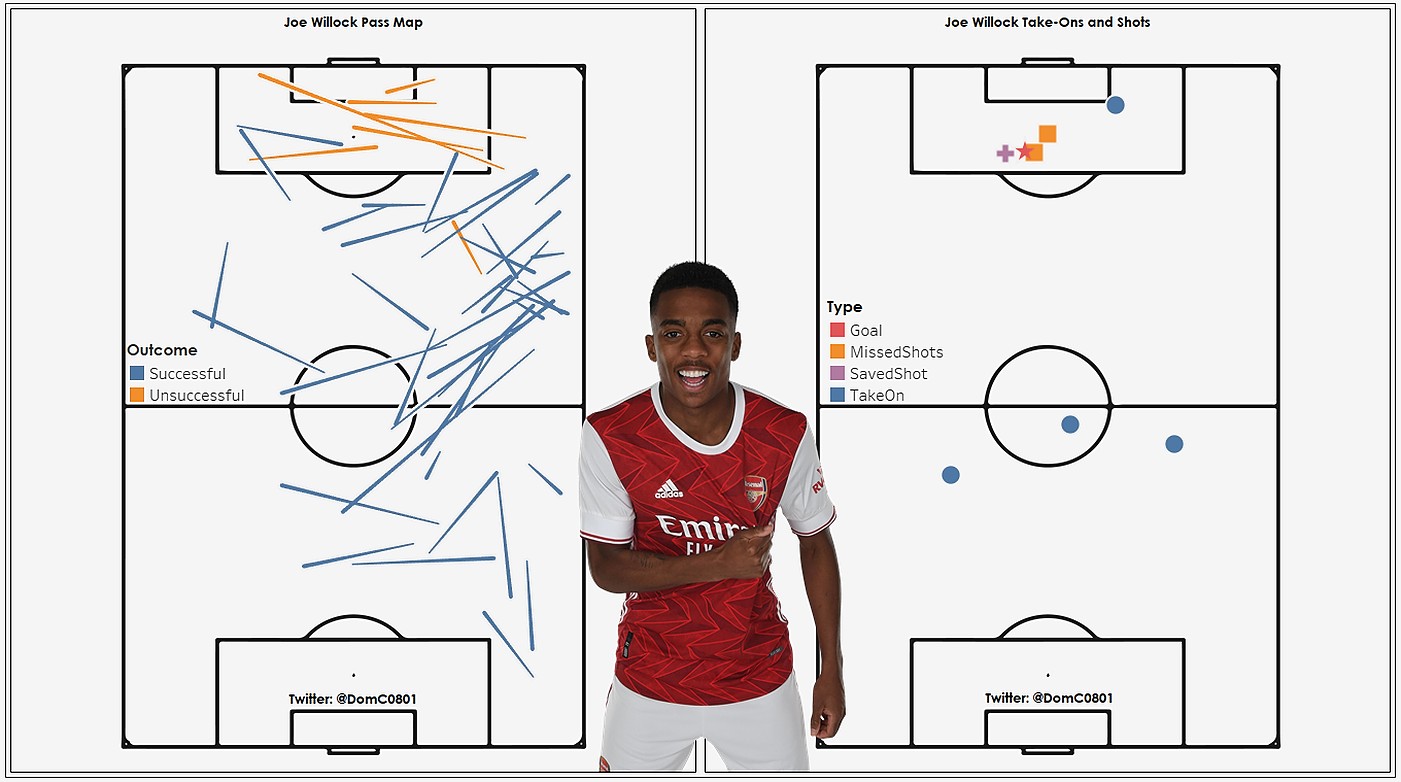 Speaking of Joe Willock, above are both his pass map and a map showing the locations of his shots and take-ons. It has been said by many people, but Willock offers Arsenal a midfield presence we have severely lacked since Aaron Ramsey’s departure. This was perfectly summed up by his chance that came from a long David Luiz pass. Willock has the ability to get beyond the striker and exploit spaces in behind defensive lines, creating chaos in defences as they attempt to deal with his runs from deep. Hopefully he will get more chances to show his worth in Premier League matches, as he could be an internal solution to a big problem.

It’s Aston Villa at the Emirates on Sunday, followed by an international break so Arsenal will be looking to keep the positivity around the club going into that 2-week break.

Super interesting, thanks. I’m hoping for Willock in place of Laca this weekend. Something like 3412 formation. Anyways let’s see. I trust the boss

My team would be :

Could swap Luiz for holding no probs, but Luiz has been great this year. Top class.

It’s a little known fact that Molde’s chairman is a gentleman by the name of Odd Ivar Moen.

This reinforces my re-thinking of Pepe’s performance–much better than I initially thought. I think those moments when he tries and fails to beat someone on a dribble and is easily dispossessed stick in the mind. (Like the awful corner kick into the side netting his last outing.) In reality, their effect on the match is the same as misplacing a difficult pass into the area–unlikely to succeed but with a big reward if it does, and no real danger if it fails. But it looks much worse, it looks like he’s not good enough, and it influences my judgment more… Read more »