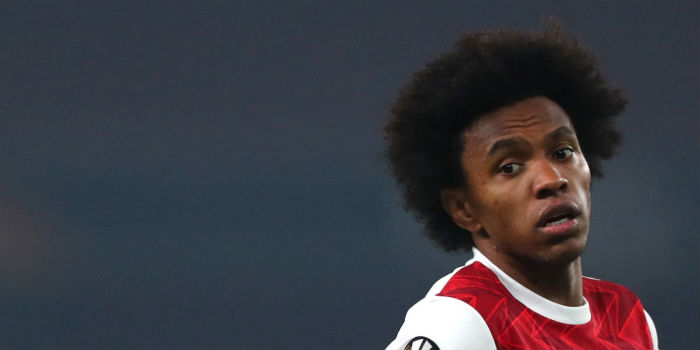 Having called for more consistency from his attackers, Mikel Arteta had encouraging words for summer signing Willian whose performances in an Arsenal shirt have been a bit hit and miss so far.

The Brazil international looked impressive in the first game of the season, grabbing two assists as the Gunners put Fulham to the sword, however, he’s not been nearly as effective in his seven appearances since.

Arteta seems unconcerned at this point and firmly believes the 32-year-old will improve as he gets to know his teammates and the team’s evolving style of play. He also highlighted a small injury that has hampered his momentum.

“I think he started really well with his first game against Fulham,” said the boss after the 4-1 win over Molde, “but we’ve been changing the front three, he had an injury, and he didn’t have time to train in pre-season – he was later than the others.

“They need to generate that cohesion, that understanding, those relationships on the pitch between the front players, the wide players, in order for things to work better.

“I can see a development in the last two games, the understanding of the things I ask them to do, it’s probably different from what he’s used to. He’s getting better and better, we all know the quality he has, and he’s a great option to have on the pitch.”

Eyebrows were raised when the Gunners committed to a three-year contract to lure Willian away from Chelsea, but the boss thinks he’s got a matchwinner on his hands.

“He’s a player who can make the difference, he’s got the ability to find the last action to open the door when everything is really tight.

“To score a goal, to make an assist, and as well the personality he has on the pitch to manage the game we need in certain moments. At Old Trafford, I thought he did that really well.”

Since everyone has to make snap judgements nowadays, here’s mine.

I’d rather play Nelson. Year 3 Willian is going to be ropey and if you want to build cohesion stop switching the players in and out!

God is a Gooner
Reply to  Parlour’s Pay Packet

Yep Willian looks like he’s just going through the motions. So comfortably sitting on a fat three year deal.
He’s lost a yard of pace and a whole load of motivation since last season playing for a new contract.

djourou's nutmeg
Reply to  God is a Gooner

comfortably sitting on his contract is kind of a harsh statement given you don’t know shit about a man who’s only played a few games for us, don’t you think? seriously, if you’re only gonna throw toxic nonsense about our players you should keep it to yourself. one thing is to be disappointed at his performances and another is to suggest he’s a selfish money grabber because he didn’t play the way you’d like to

I found the criticism of him a bit strange, at least in the sense that I think he’s doing pretty much what Arteta wants him to do. He’s not someone that’s going to go past a punch of players or get 30 goals a season. But he’ll press and track back, he’ll keep the ball and he’ll link up with the midfield and full backs. He’s not the sexy option most of us would prefer, myself included, but he’s clearly the option Arteta prefers for now.

He looks mature, intelligent and controlled (at least when he is playing well) which I suspect is why he’s getting the nod over Pepe.

Pepe for me is a bit all over the place but there’s no doubt he has a lot of ability.

Bit of a headless chicken sometimes

Yeah exactly this. I don’t Arteta was expecting anything flashy or a bunch of goals, just someone with the mentality and technical skills to execute his game plan.

It’s especially noticeable when he drops in between the lines and finds simple passes to players in better positions. In retrospect this is maybe how Arteta would have wanted to use Ozil, but issues around attitude and position might have stopped him.

Regardless, he’s clearly not a fan of the mercurial/maverick type players. Pepe will need to bring more consistency to his game before displacing him.

Yep it looks that way.

If you watch Auba he doesn’t run around a lot or do flashy things but he knows where to be and what to do and when an opportunity presents itself he pounces.

I think we’ll see more end product from Willian once we sort out the problems with the team in general. He’s always got a plenty of goals and assists in the past.

Is this what you have seen him do or what he should be doing? Cause apart from passing it backwards and misplaced crosses, I ain’t seen him do much else.

Wasn’t this guy supposed to come ready made? Why the fuck are we signing 32 year olds on rockstar wages for three years “who are making progress”?

Wish this comment could be to Arteta’s face. I have long suspected the Brazilian connection here! I mean, look at the Brazilian traffic since Edu came in. It’s bound to come with a little gabbage.

Both Pepe and Willian are individually ready made players but both still have to take time to fit into the new team structure and style of play. It takes time to build instinctive understanding and confidence with your teammates too. Even great players such as our TH14 took 8 games before he scored his first goal for the club. Both Willian and Pepe for me have different skill sets in their locker but Willian I think is probably ahead in Arteta pecking order at the moment becoz he does not loose the ball cheaply as often as Pepe. Pepe at… Read more »

I feel like I’m rushing into a snap judgement now so let’s see what he does until Christmas and hope it’s better, we’ll need everyone to contribute with the December fixture list.

That being said, I’m not impressed so far, I think Willian is often one of the worst players on the pitch and I like how R Nelson looks in comparison.

He’s been crap. He might not continue to be crap, but it’s not a snap judgement to say that up until now, Fulham game apart, he’s been crap.

I’m not a pisstaking negative fan but I genuinely think willian is one of the worst signings we ever made. Stay away from ex Chelsea players. Cech gallas luiz and now willian all disastrous.

We lost Schezney because of Cech purchase. I agree with other poster that we should stay away from Chelski rejects. And ManU ones as well!

Well…. Schezney just wasn’t made to play for us. Wenger lost his patience with him and not without reasons.

Szczęsny smoked in the showers because of Czech?

We signed Cech *because* we sold Szc, we didn’t ship out Szc so that we could sign Cech.

We need someone to carry these sentiments to Arteta’s desk. Funny, he doesn’t have patience for Ozil but has enough to teach an old new dog new tricks?

Pretty sure Billy was our best defender the majority of the time he was with us.

Not convincing. Yet. Seems past it already. Let’s hope the improvement comes soon. Like next match

Give the game time to our younger generation who are hungry and give a s***t. This narrative from some fans that he tracks back is false, he trots back slowly if he can be bothered at all in most games. Looks like he’s just going through the motions in the twilight of his career.

He is an absolutely USELESS signing brought by his agent and Gaspar. Costing a lot, bringing nothing, putting aside young ones and the one we don’t talk about who has always been and is still far better. Saving expensive private Borges was his agent and Gaspar’s mission and it is a big failure whether he’s able to move a ball against almighty Fulham or not. Useless.

To be honest he’s performing like he did for Chelsea. Mostly anonymous but hard working,
and a really good performance now and then. Last season he had a little purple patch but on the whole he’s exactly as I expected

That purple patch coincided with the return of Giroud to the starting line up, which precipitated a tweak in their style. They became more direct and more of a threat on the counter, Willian being able to easily pick out the 6ft4 Frenchman and also use him as a foil.

Some probably set higher expectations…thus they expect him to produce more than the 2 assists he had this season. But over the course of the season if can produce the same numbers he had over his time at Chelsea..I am ok with that…

It is quite subtle progress with Willian. Personally, I see a decline since Fulham. You have to say it wouldn’t have been worse if we’d used Nelson instead and Pepe.

Willian needs to up his game significantly to avoid looking like an expensive retirement signing.

Willian is the footballing equivalent of a bland carbohydrate. A potato, if you will. A cooked potato is still a potato. It just serves to bind other flavours. Right now there aren’t enough flavours to bind.

It’s players like Willain that make Arteta want to go back to 5 subs… He often got substituted last season, much better for older players to know they are only going to get 55 or 60 minutes…
They elephant in the room is not Willians performances, it’s the lack or convincing performances by Pepe and his inability to hold onto the ball or shoot on target without an epistaxis. One or two good passes does not make a winger…

Pepe is a whole other question mark due to his price tag. Just because both are questionable let’s not mix up the two by having one cover for the other.

Something is rotten in the state of Arsenal’s purchasing methods.

Surely end product in goals and assists are all that count for attacking players. Any number of passes are not going to make us win games.

Willians performances would be fine if he were a young prospect, but he’s not

This kind of patience is kinda wasted on a 32 year old, unless the person who said you ‘you can’t teach an old dog new tricks’ was a damn fool’.
Willian is past his peak and no matter how well he adjusts, pace and agility will never be regained.

he’s gonna be our player for the next 3 years and after just 7 games you’re already talking shit about him, you bunch of twats. he’s not gonna play any better with your constant criticism, you haven’t even given him a chance. i bet y’all cry when someone says something mean about you at work. you’ve already stated he was not our preferred signing when it happened so now it’s time to stfu and support him