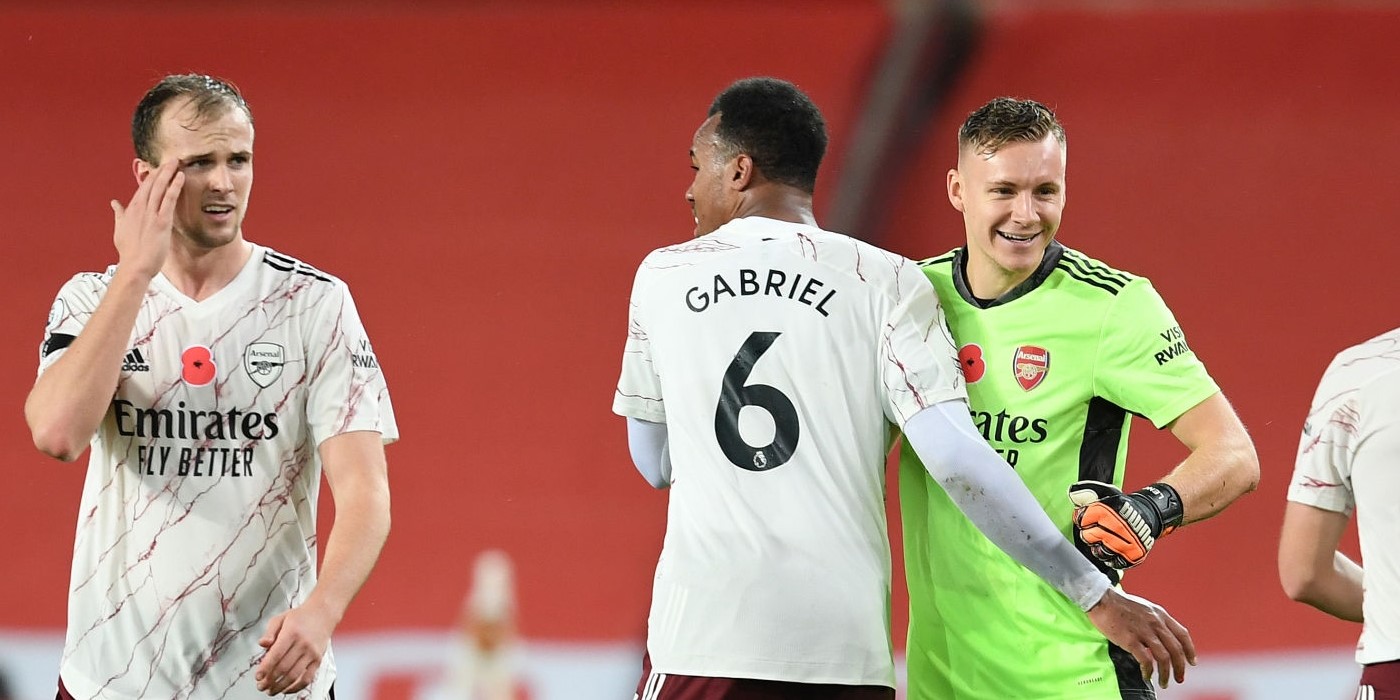 The day after Halloween Arsenal managed to banish two curses in one fell swoop, as Arsenal beat Manchester United at Old Trafford for the first time in 14 years, as well as winning away to a ‘big 6’ opponent for the first time since January 2015. Pierre-Emerick Aubameyang’s penalty capped off a great tactical display, with Arsenal limiting United to only 2 shots on target only a few days after they had put 5 goals past RB Leipzig.

Let’s delve into the data to see if we can gain more insight into the victory at Old Trafford. 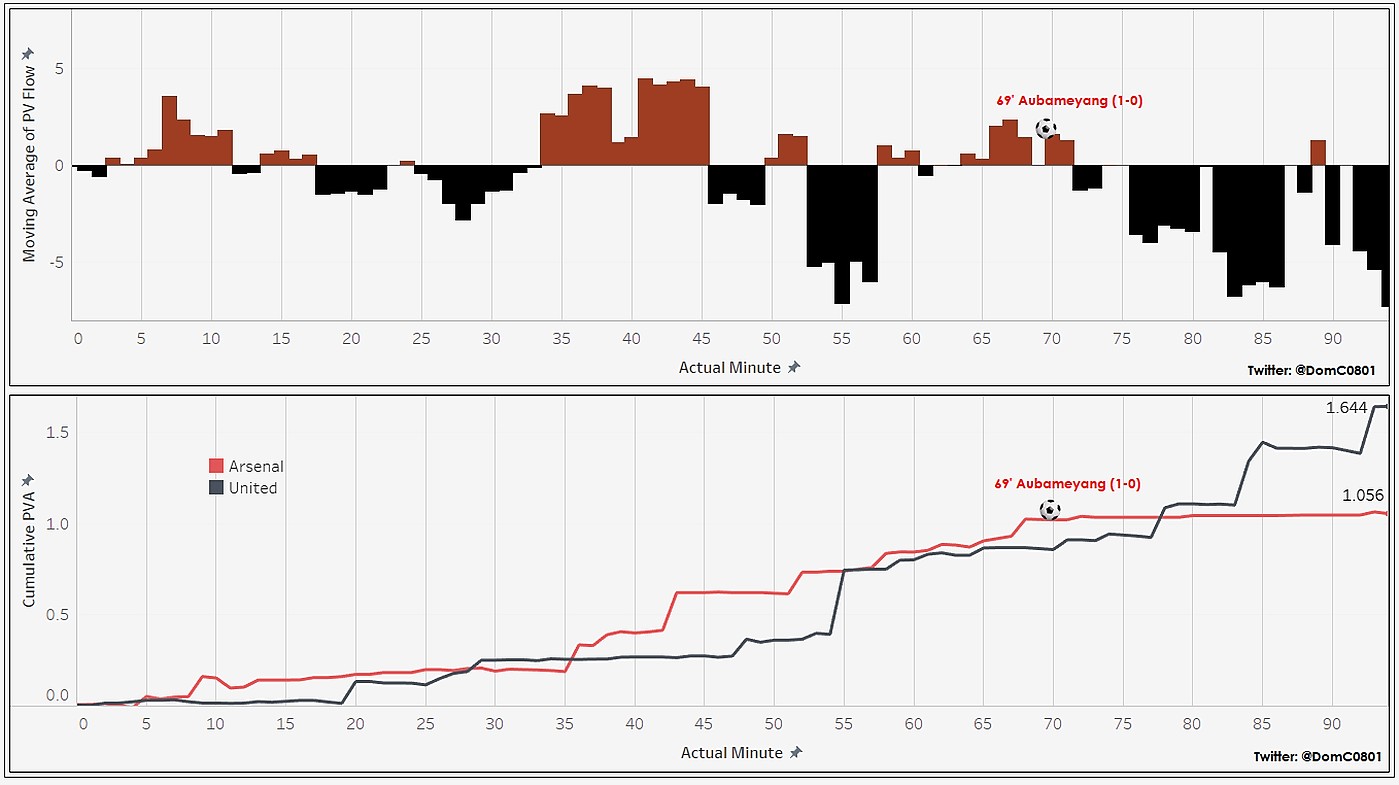 Above are the Possession Value (PV) Flow and the Cumulative Possession Value Added (PVA). What we can see is that Arsenal controlled the game up until we scored, when we then dropped back and dared United to breach our defence. What is noteworthy is that United’s 2 biggest PVA ‘jumps’ occured at set-pieces, where Luke Shaw’s good deliveries towards Harry Maguire gave United a large PV boost. Arsenal’s defensive changes after the goal nullified our attack but helped us to seal a vital away win. 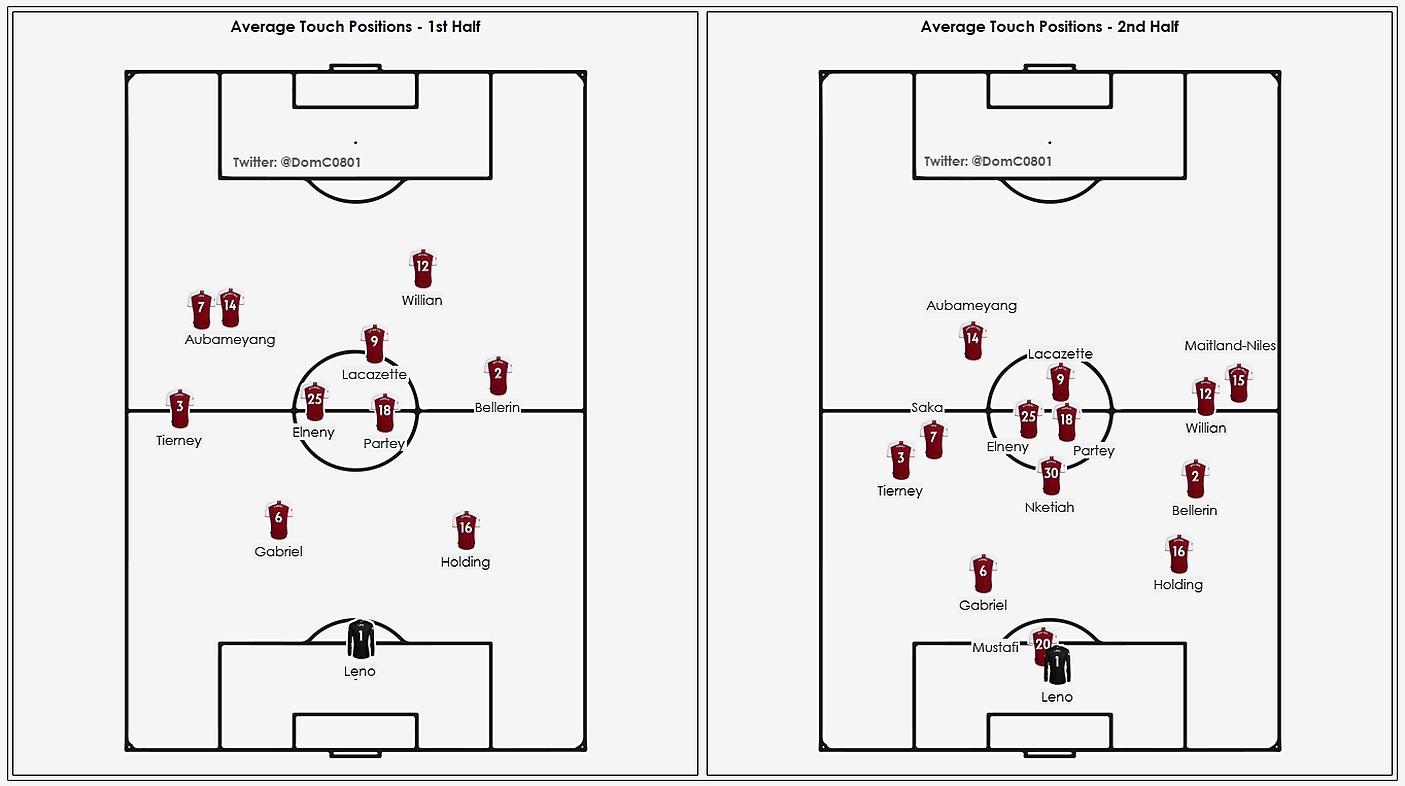 Above are the average touch maps from the first and second halves. Alexandre Lacazette dropped deep with Aubameyang and Willian pushing in behind him in possession, a familiar feature of our possession play. Interestingly Bukayo Saka played far further up the pitch than he usually does, with the Hale End graduate having success at getting in behind Scott McTominay on the right-side of United’s diamond. In the middle Thomas Partey and Mohamed Elneny kept close together and both put in stellar performances on the big stage. 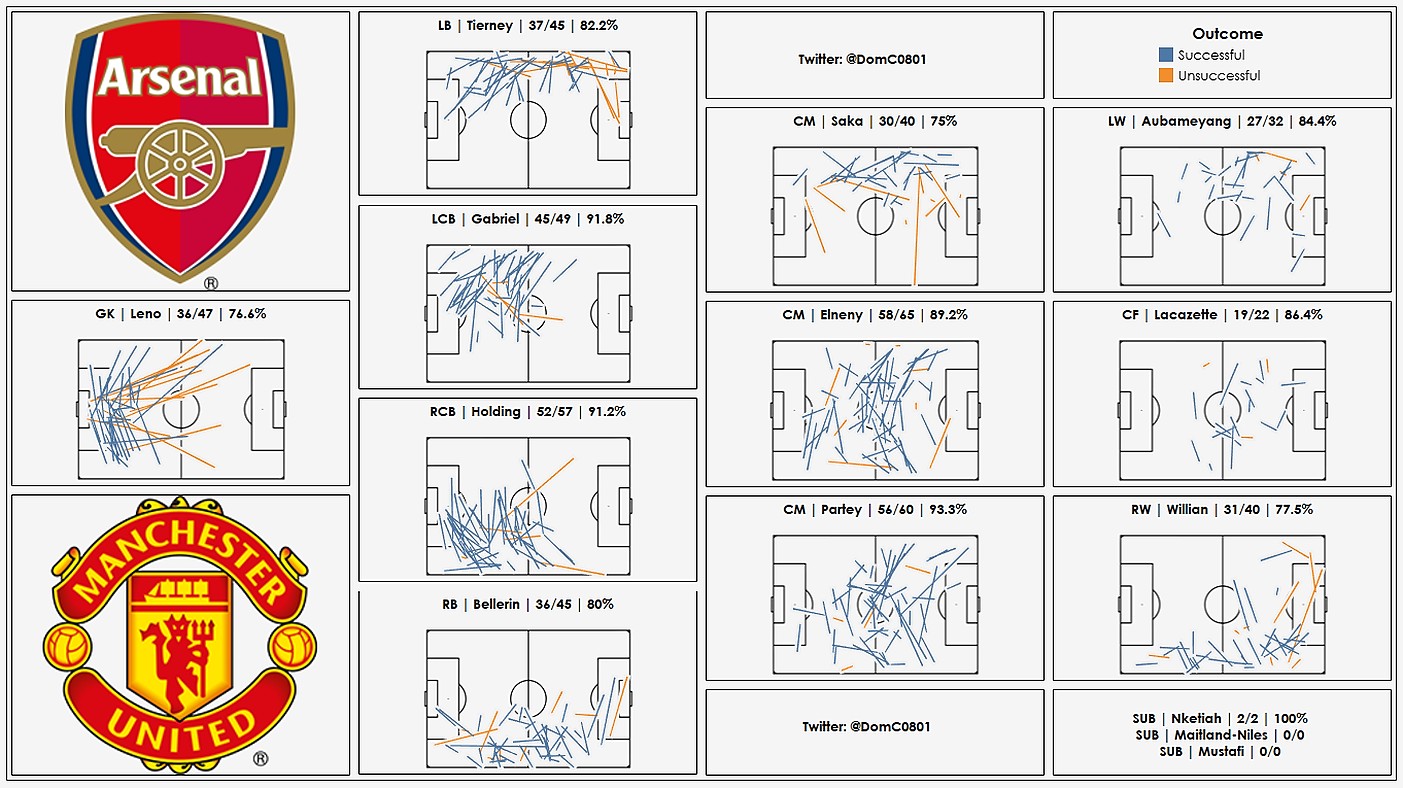 Above are the pass maps for the Starting XI. What is particularly impressive is the control and composure in the passing of Thomas Partey and Mohamed Elneny, who were pressed by the United midfielders for most of the game and yet between them only misplaced 11 passes. Bernd Leno’s distribution also impressed me, with the German keeper’s passing to his full-backs much improved. Arsenal’s right-hand side proved to be the area where we found the most joy, with Bellerin and Willian linking up to win the penalty as well as completing 6 passes into the United penalty area combined.

Above are the % of PVA per player from the victory at Old Trafford. We can see that Arsenal found joy down the right-hand side with Hector Bellerin, Thomas Partey and Willian being the 3 most threatening passers on the night. Pierre-Emerick Aubameyang struggled to threaten with his passing, but got into good attacking positions throughout. 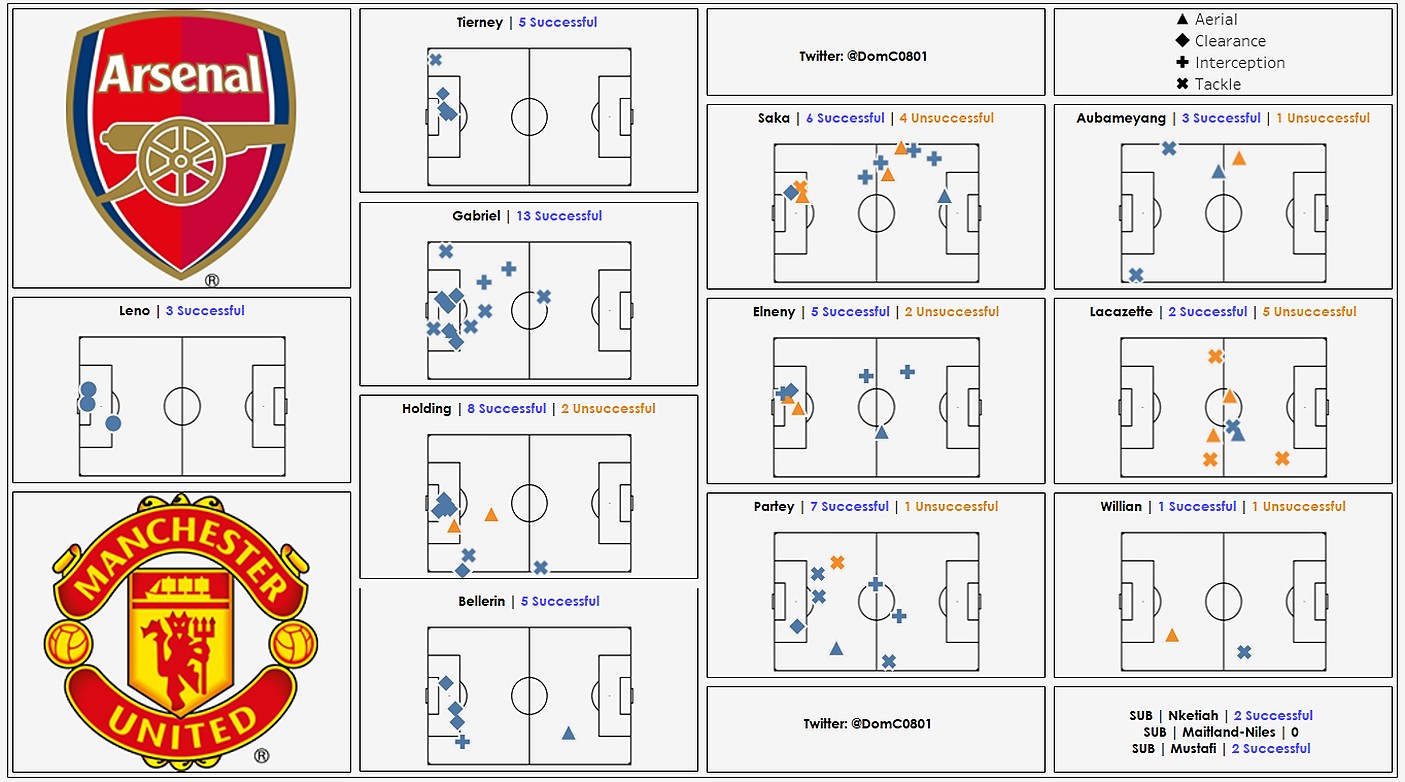 Above are the defensive actions maps for the Starting XI. What is immediately noticeable is the performance of the back 4 (or 4 of the back 5 depending on how you classify how we played), with Hector Bellerin, Rob Holding, Gabriel and Kieran Tierney completing 31 of 33 (93.9%) attempted defensive actions. Gabriel and Holding in particular put in brilliant defensive performances under a late United bombardment of the Arsenal box. Thomas Partey, Mohamed Elneny and Bukayo Saka put in all action performances, with the 3 men covering the entirety of the middle third with their defensive actions as Arsenal showed grit and a resilience that has been missing from away games against ‘the big 6’ for far too long. 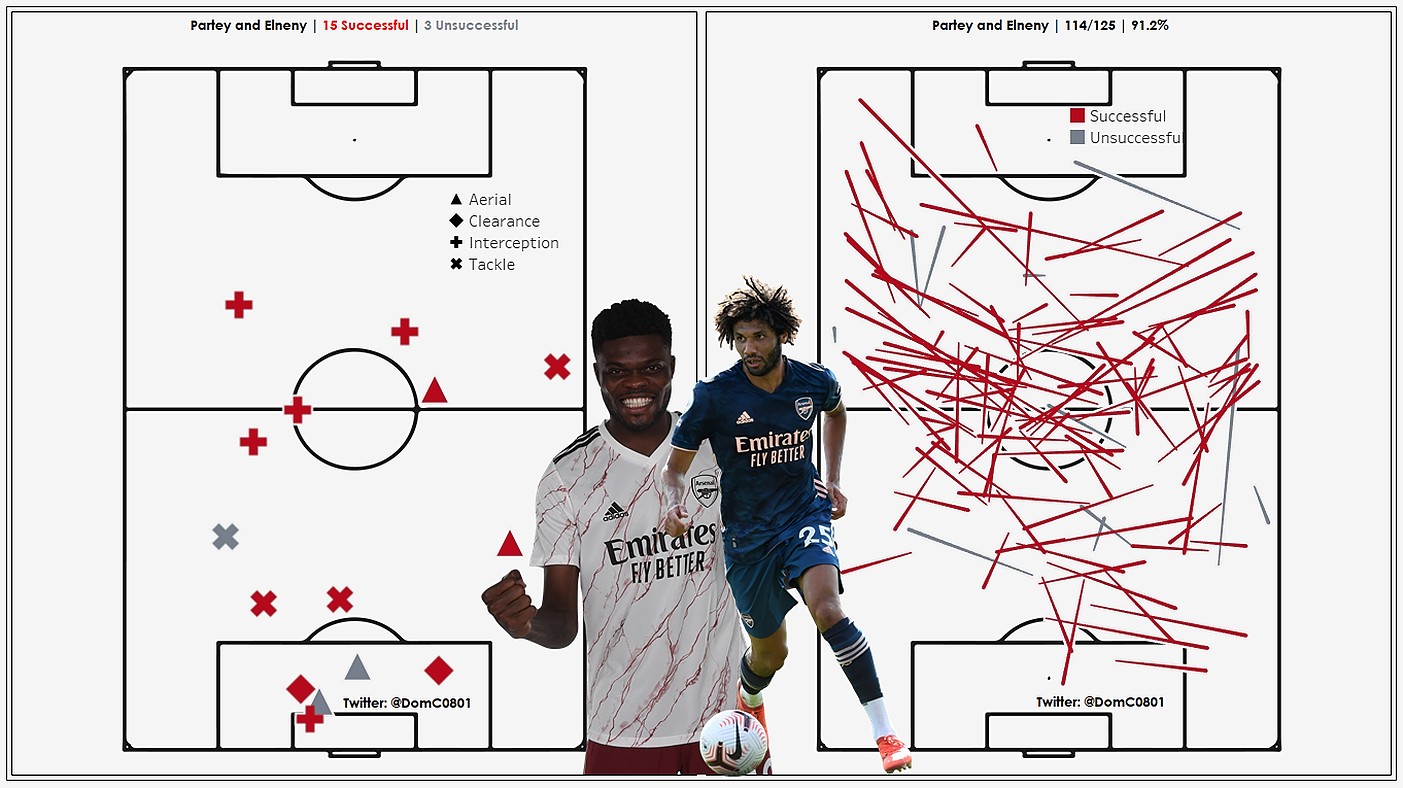 Lastly I thought I’d highlight the performances of Thomas Partey and Mohamed Elneny, who combined to shield the Arsenal defence and dominate the midfield battle. The two African midfielders showed desire, workrate, athleticism and great technical ability to completely nullify the United ‘diamond’ that had proved so dangerous in the Champions League and Elneny will have shown Arteta what he can offer if given the opportunity to start.

On a sidenote, I used a different colour scheme for this (red for successful, grey for unsuccessful) so let me know if you prefer it to the Blue/Orange colour scheme I’ve been using so far this season.

It’s Molde in the Europa League on Thursday, before we welcome Emiliano Martinez and Aston Villa to the Emirates on Sunday in what will be a tough game.

Burnley 1-1 Arsenal: By the visuals

Gabriel is a future Arsenal captain.

Imagine Saliba being as good as him in a couple of seasons too.
Defense sorted for a decade.

Hey Dom, really enjoyed this. I appreciate your writing style in that you explain without patronizing or dumbing down the content. Excellent read. Appreciate.

I like the red, it is Arsenal’s colour so make sense to keep it.

Having the other colour as yellow would be best to give a good contrast to the grey background and also the red.

Looking at the data, I think Laca is playing too deep. I know we are better defensively, but we need Laca a bit higher in and around the opponents box. Hopefully with weaker teams he will have more touches in the opponents box.

You think Laca is playing too deep. Check out Eddie.

TBF Eddie came on when we wanted to see out the game and we’re playing with 11 men behind the ball. I’m sure this visual looked very different against Dundalk.

Think about the gamestate of Eddie’s minutes

My view on Laca is that he should be a sub player. I’m not seeing any value in starting him so often… Maybe Arteta sees him differently and wants him to get confident again. But I find he is not spontaneous enough, misses some good chances, seems to be unhappy being taken off, his body language in general just seems a bit flat. And so would prefer to see Auba or Eddie start up top. Use Laca in Europa league group matches instead, or as I said earlier, a sub.

The way this team is setup, with no number 10, the striker has to come deep to build up play. I think whoever plays as striker won’t be prolific, until the build up improves.

I hear you, but still think that he shouldn’t start so often in PL games. I just don’t see him as top quality… I think we should have replaced him this last transfer period and found another CF that could do this job better. Maybe that in itself is difficult. But if we want to get top 4 and compete for big trophies, we need to spend on this critical position. We spent big on Pepe when we could have bought a solid striker/cf. But I guess many things arrive in hindsight. Not that I don’t like Pepe, but I… Read more »

Arteta sent him to man mark Fred, and he did the job.

A Different George
Reply to  Mentalista

He made Fred almost irrelevant; United was unable to get out through the middle.

Laca plays deep to knit the play further up the pitch. Not his greatest strength and, with our pedestrian midfield, he’s had to do a lot of it. That is bound to affect him in the rare occasions he’s in front of goal: he now overthinks what used to come frequently and naturally to him.

However, if Partey and Elneny can progress the ball further up the pitch like at OT, he will spend more time up the pitch.

I think many fans are struggling with a new way of playing that multiple managers have been implementing recently especially with strikers. People look at this and this Laca’s position is a problem, when that is exactly what his coach wants him to do. Look at Liverpool and Man City too recently. The so ‘number 9’ – Firmino, Jesus, sit back and creates space for other runners like Sterling, Mane, Salah, to run into. I don’t claim to fully understand the tactic, and it frustrates me too, but it is clearly something he is being asked to do by his… Read more »

I prefer blue and orange. They stand out and neither one dominates. The red to me is too dominant and the grey is hard to see.

Also on the defensive actions, laca seems to have been more praised after this game but he got 2/7 so… Maybe he can still do bettet

The boys done well, as they say. Only two shots on target from Utd (although I think we had the same, but we were the away team after all). More pressure from them towards the end as could be expected, but we held firm with Gabriel and Holder doing the business as the data show. Overall, a definite overall improvement over earlier PL performances so let’s build on it against Villa, Leeds and Wolves!

Nice to see such healthy numbers!! Was a great game and hope we keep up this midfield dominance from now on… Although our attack was a bit lacking, we pulled it off by being solid everywhere we needed to be. Seeing Gabriel tackle on a yellow made me sweat… I think we were a bit lucky to keep him on the field till the end. It was spectacular to see us defend on point till the final whistle.

In terms of trick or treat, I think we got both! Tricked man u, and got a treat 🙂 let’s repeat this!

Lucky to keep him on the field with Mike Dean refereeing

If that was luck, then under Fred’s shirt must have been a rabbit’s foot, a four – leaved clover, a sprig of heather, a saint’s toe bone, etc, etc…

Blue and orange are clearer, the blue disappears with the red. From no midfield to an awesome midfield, add the best defence in the League and we just need a bit of sharpness up front. There’s so much progress.

Great analysis, thanks! Fabulous result even though I watched from behind the sofa

Love your work with these by the visuals pieces, many thanks. I do find the grey a bit harder to pick up than the orange. Looks nice though.

Regarding the colouring of the successful and unsuccessful passes.

For me green is successful and red unsuccessful

Doesn’t help the red/green colour blind among us though!

Haven’t thought about that!

Thanks for this visual report, Dom

Thanks for this visual report, Dom

Good points but getting a bit boring now…

Red/Grey gets my vote.

A couple observations: 1) You can tell from Leno’s passing chart that the build-up down the right side is intentional all the way from the back. I forget what past games’ charts looked like for him, but I expect they would show a heavier left bias instead. 2) I thought it was interesting that Elneny played (nominally at least) on the left of the midfield two with Partey on the right. I think we’re so used to Xhaka having that left spot locked down that I just expected Elneny to remain on the right and Partey to swap for Xhaka.… Read more »