Molde 0-3 Arsenal: By The Visuals

Arsenal ran out rather comfortable 3-0 winners away to Norwegian side Molde. It was a night where the Hale End academy graduates shone as Mikel Areta’s Arsenal qualified for the knockout stages comfortably. 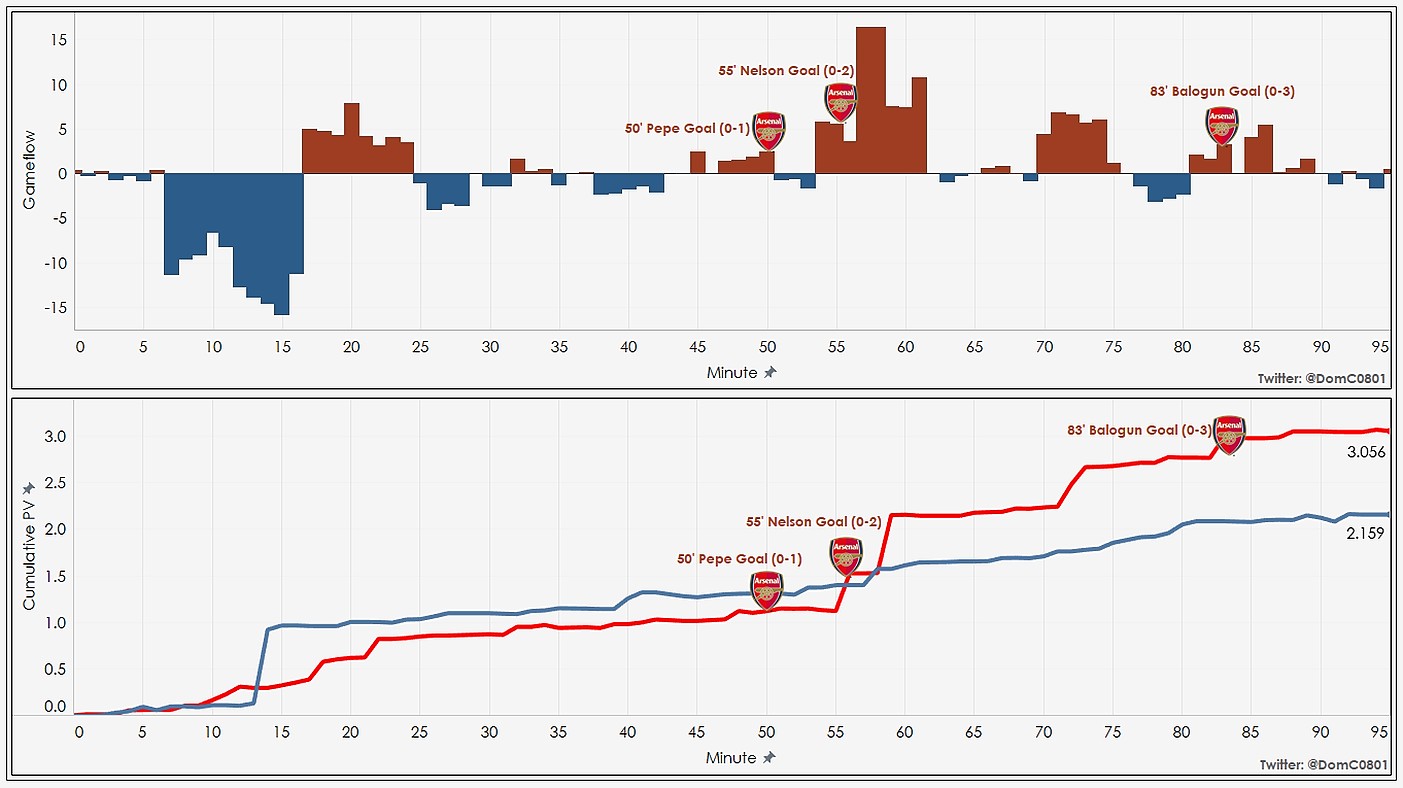 Above are the Possession Value (PV) Gameflow and the Cumulative Possession Value Added (PVA) from Thursdays game. Arsenal struggled at the start of the game, with Molde creating a chance that added 0.9 to their Possession Value (that is very large) which they somehow managed to miss. Arsenal recovered in the second half and controlled the game, limiting Molde’s attack and creating threatening opportunities consistently. 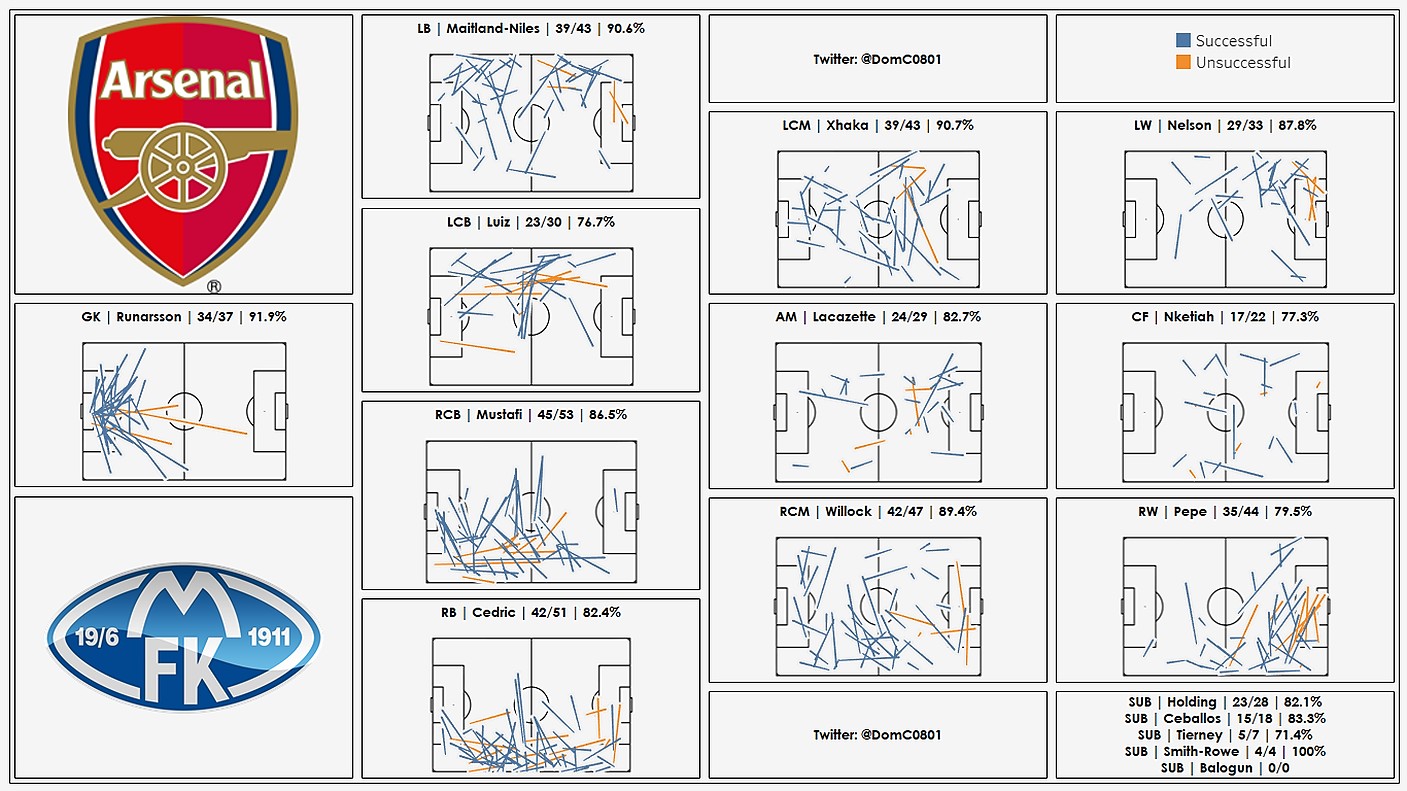 Above are the pass maps for each of the Starting XI. Most of Arsenal’s good possession came down the flanks, with Molde’s compact 4-4-2 shape limiting space centrally. As a result Alexandre Lacazette, playing in an unconventional number 10 role, and Eddie Nketiah were left quite isolated. Reiss Nelson and Nicolas Pepe were particularly impressive, with the Ivorian looking like he had a point to prove following his sending off against Leeds. 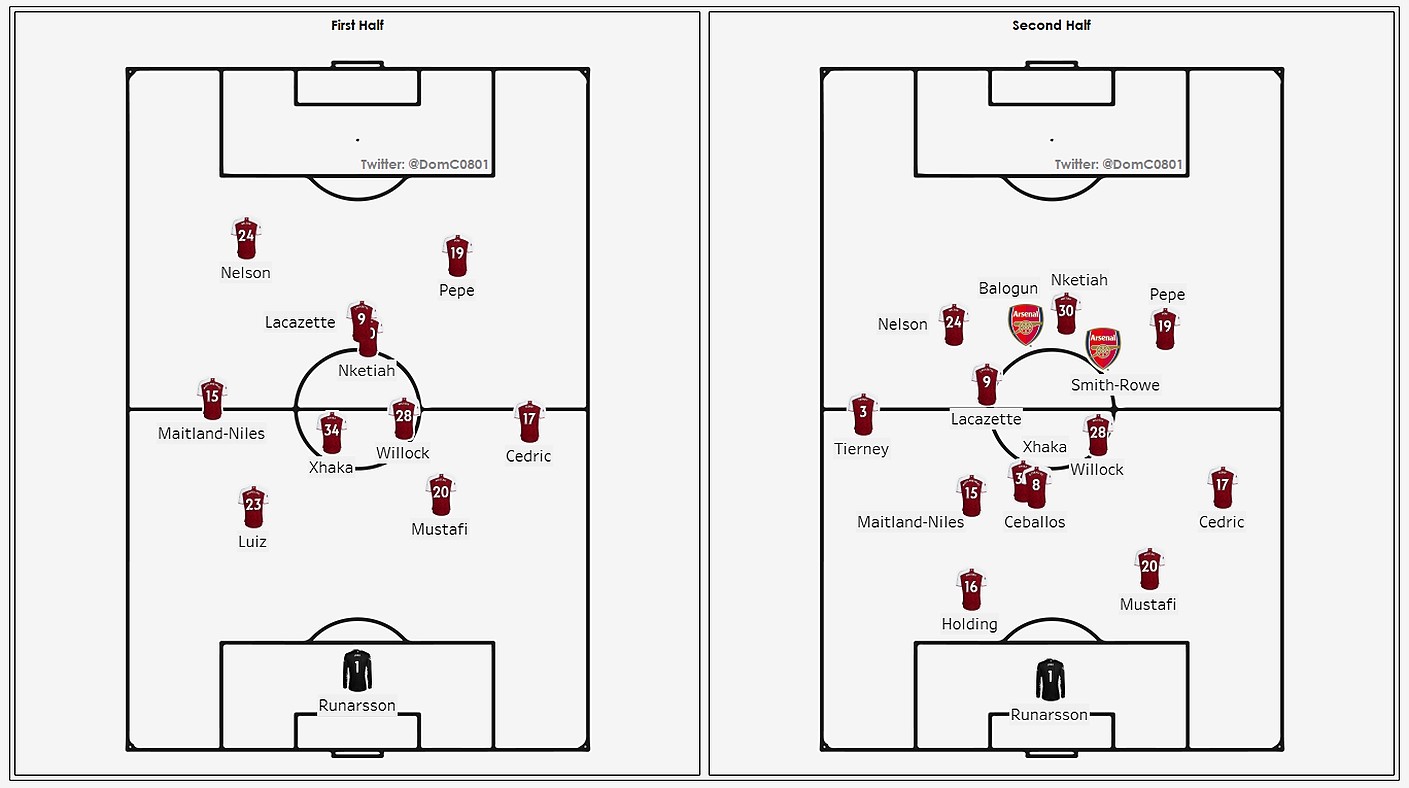 Above are the average touch positions for the Arsenal players in both halves from Thursday’s game. Arsenal seemed to gain more control of the game when Pepe and Nelson became more involved in build-up play as indicated by their deeper average position in the second half. Arsenal also seemed content to pass around the back after scoring with the defence and midfielders being more withdrawn in the second half. 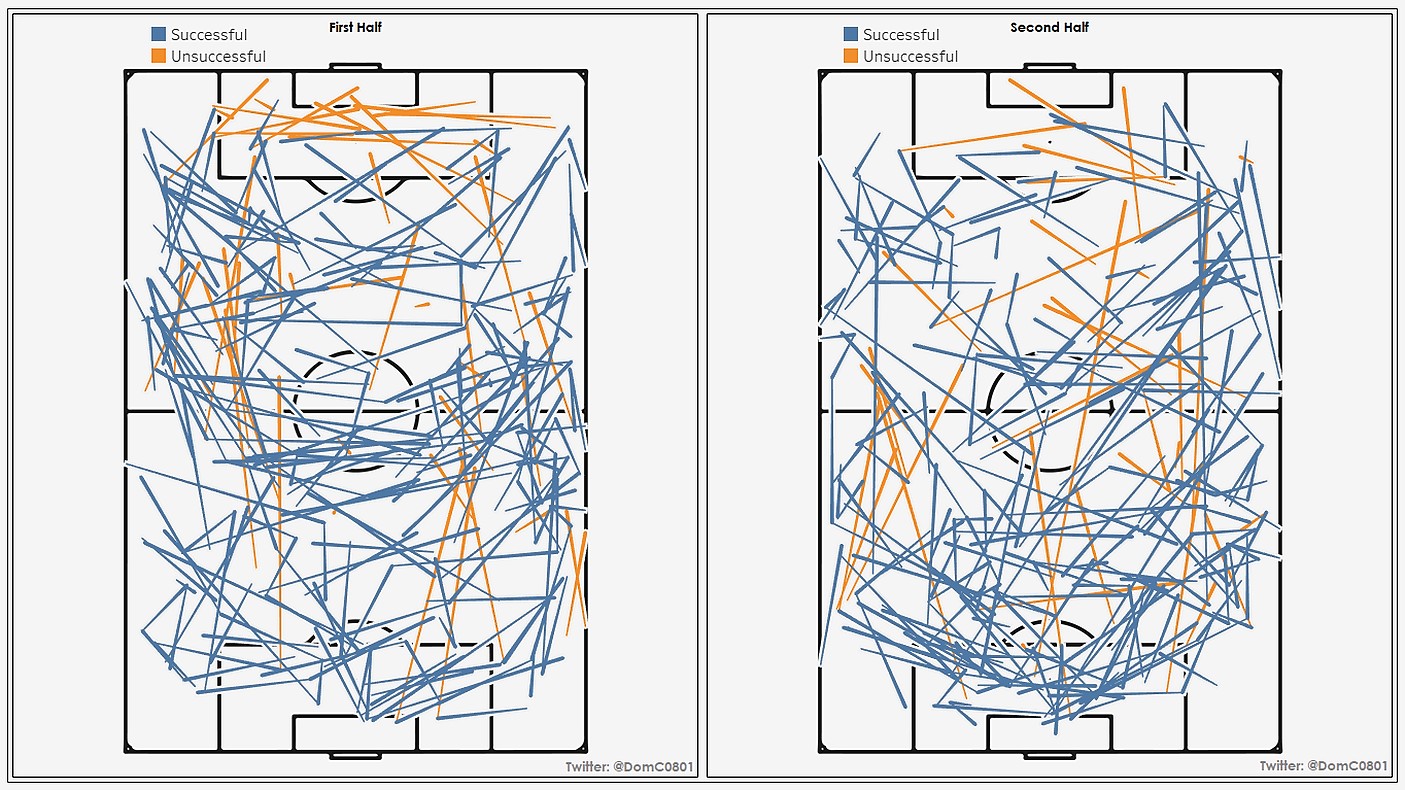 Above are the Possession Value Added %’s for each of the Arsenal Starting XI and substitutes. Pepe excelled again with Joe Willock and Cedric Soares also proving to be effective in possession.

The last thing I wanted to mention was the increased level of attacking rotations that Arsenal seem to create when Willock and Nelson play. These rotations and movements can be key to creating space and thus creating opportunity. As Johan Cruyff once said “if you have the ball you must make the field as big as possible” and I feel like we do this best when we play Nelson and Willock as their athleticism and intelligence leads to spaces being created as defences are dragged out of shape.

Anyway it’s back to Premier League football on Sunday as Arsenal welcome Wolves to the Emirates.

Previous articleRunarsson: Game time helping me build confidence
Next articlePartey out, Elneny back, Saka being assessed

A game like this should be taken in isolation, as Molde, with all due respect are probably English Championship level. I dont think Arsenal have been put in such an easy group in Europe. I dont think we learned anything of note. Willock actually did nothing in the first half, Xhaka was unambitious as usual. Lacazette looked lost and Nketiah is running around in a manner which looks like he is trying too hard and pulling nothing off. Pepe and Nelson were good, but like I mentioned, the opposition was mediocre. Play the academy lads for the remaining 2 group… Read more »

I’m sure you’ll get tonnes of down votes, but you’re right. These are very ordinary football teams. And against the less ordinary teams we continue to prove our own mediocrity.

Honestly as an Norwad i must say Championship level is probably a little high. The championship is 9. best league in europe, the Norwegian eliteserie is nr 22 or 23 i think officially, top 10 of league 1, maybe.

@Chuffy, you are right in the levels of comparison but wouldn’t it be nice to see this level of movement and creativity in the PL?
If the “1st choice” aren’t showing it, but the youngsters are, should we be giving them a chance to prove themselves at a higher level? If it succeeds, great, they put pressure on their senior team members and if not, we still have them anyway.
We just need more in the PL and a change could be a good thing.

Dom, this is great as usual. Which tool do you use? This interests me greatly, but as an absolute Tableau novice, I haven’t yet encountered anything close to dashboards like the ones used for the passes.

Hey, where is all the news today? We have a game tomorrow! Is Partey fit? Is Willian injured? Does Klopp’s meltdown have any impact on our team?

Slightly off topic, but just watched a documentary about world cup 86, have to say I disagree with blogs and absolutely loathe maradona for cheating England out of a world cup semi final!!! Disgraceful!!!