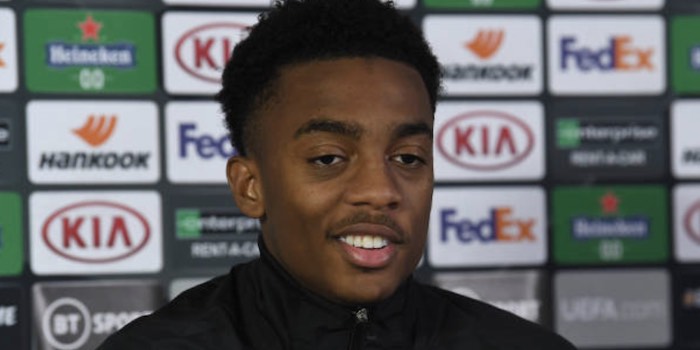 Joe Willock says he’s not overly keen on speaking too much about playing time this season, preferring instead to do his talking on the pitch.

The midfielder stood out against Dundalk in the Europa League last week, and is set for a start against Molde at the Emirates tomorrow.

He has yet to feature in the Premier League so far this campaign, but he’s patient, ready to learn from the senior players in the squad and, crucially, ready to give them some genuine competition.

“I’m 21 years of age and I’m playing for the team that I love, I’m not looking at it too intensely, I’m continuing to work hard and give the question to the boss.

“Every game I play I need to give the question and knock on the door with my performances. I don’t really like to speak, I like show it on the pitch. ”

There were suggestions he might go on loan, something he doesn’t rule out, but he insists conversations with Mikel Arteta have been a source of encouragement for him.

“I’m just focused playing for this club, and focusing on what I need to do,” he said.

“Tomorrow there’s a game, I need to focus on that. I’m not looking too far ahead, so I’m trying to knock on the door with every performance I have.

“I always want to kick on, I always want to start more games in the Premier League, and become the player I’ve always wanted to be. At the start of the season I had a few conversations with the boss and it was very encouraging.

“I thrive on competition, so when I had the conversation with him, that was something positive for me, I wanted to learn from these players that are coming in, that I can train with every day and I can compete with them.

“I want to compete with these players. I told him that’s what I wanted to do, and it was very encouraging for him to support me and say if I play well, I’ll get the chance, so that’s what I’m trying to do right now.”

Let’s hope he can give the manager more to think about tomorrow as we face the Norwegian side, also with two wins out of two so far in the Europa League group.

I hope he starts tomorrow and has a good game. I feel like he is still missing some key atributes to be a first team regular. He needs 15-20 games under his belt this season, so hopefully he gets it in the cup competitions, if not then a 6 months loan in England will do him no harm.

I think he could still make an impact for us in the league. I can see him starting at home against some of the lower placed teams, or at least coming on as a sub, to provide some goal threat from centre mid.

He’s not good enough attacking midfielder to be a No. 10. But if he could develop a better defensive game he has the potential to be a really good box to box player in the mould of a Partey. He’s got all the raw ingredients like athleticism and ability on the ball.

Let the boy in for goodness sake!

He still has the chance to mould his game to what the team needs going forward. A Ramsey role, or whatever else Arteta needs. It is always nice to see the Academy guys make it big at the club. They feel closer somehow though we don’t actually know them