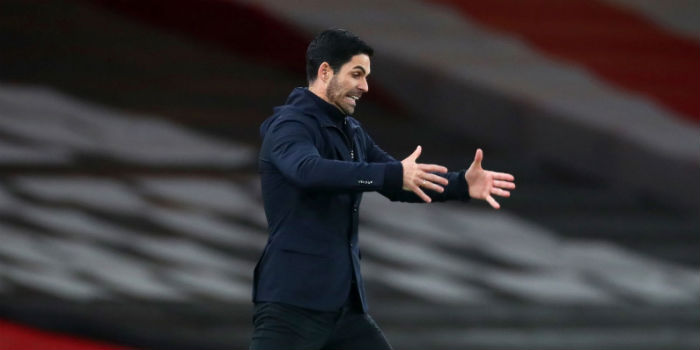 Arsenal got a point and ended their home losing streak from reaching five matches.

This second match in a row where Arsenal were forced to play a major chunk of the second half down a man and it was nice to come away with a point. This helps give Arsenal some breathing room so the unlikely drop into a relegation fight is even more unlikely but unlike in the last against Burnley there weren’t obvious signs that Arsenal were on the precipitous of winning this match.

A lot of the same frustrations are there and hopefully those can start improving with the run of losses ended.

Arsenal 1-1 Southampton: By the graphs 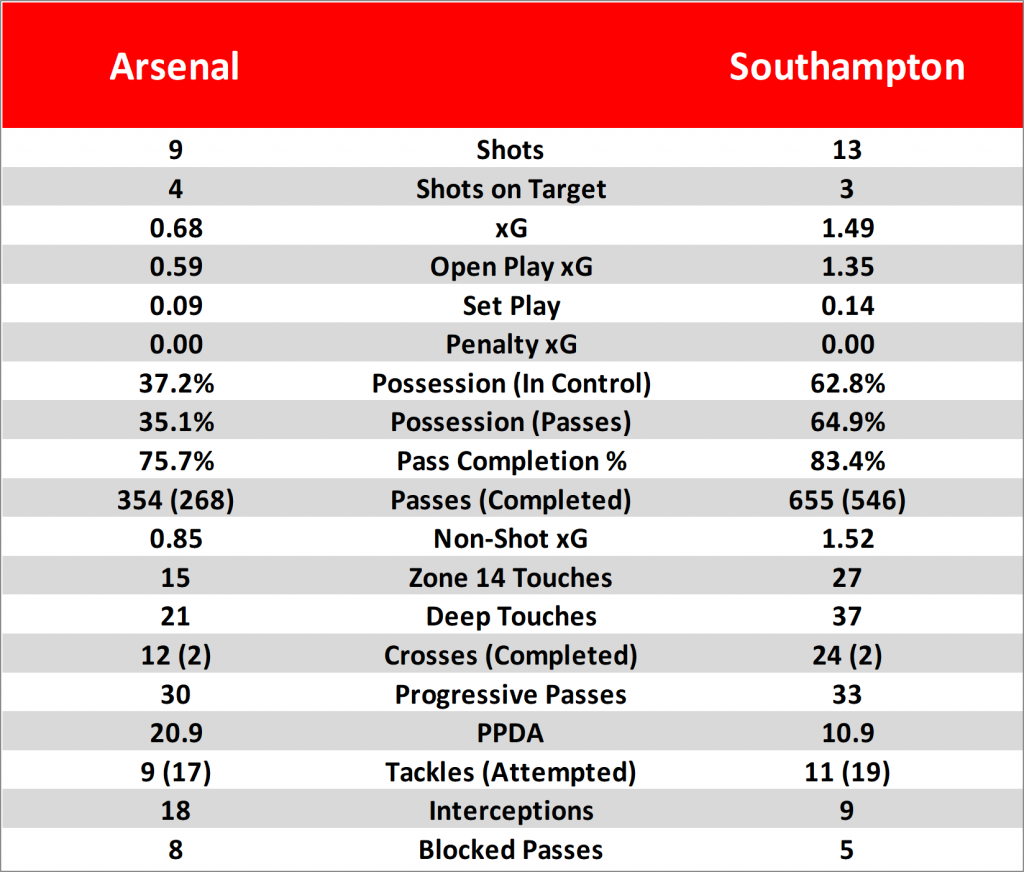 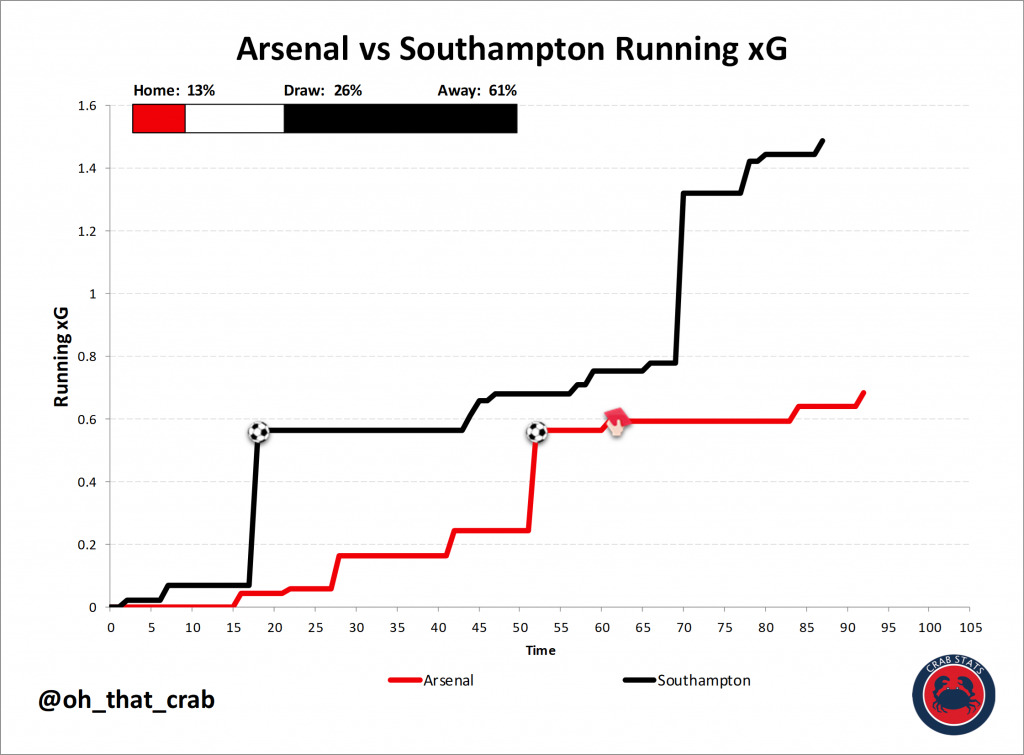 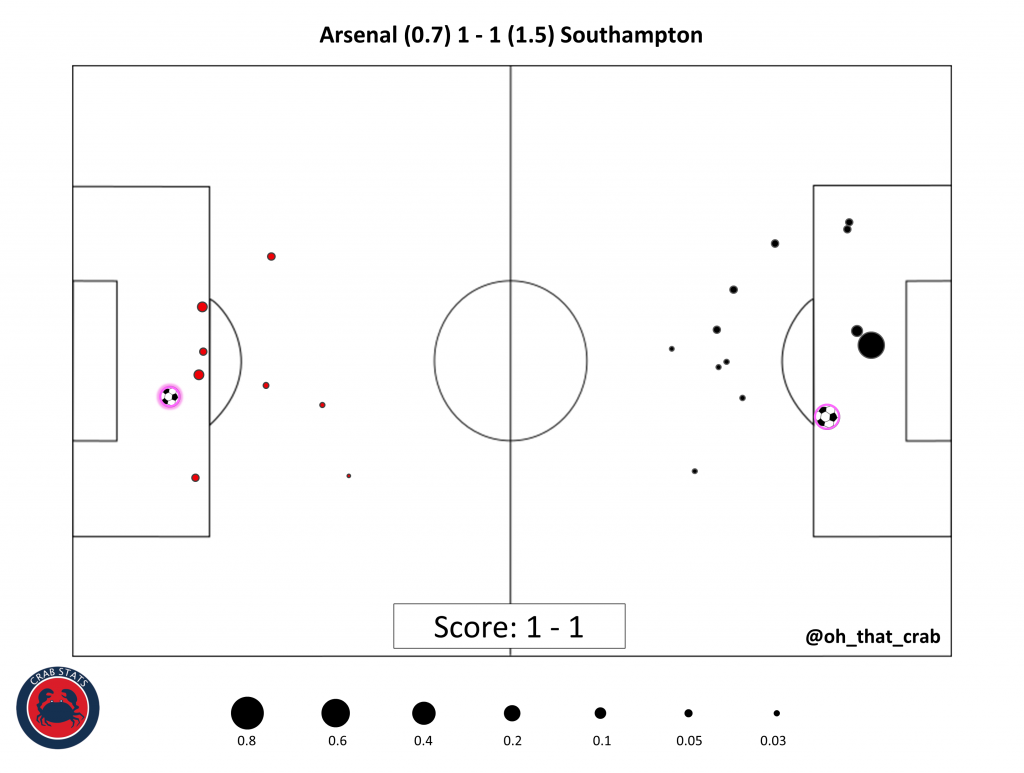 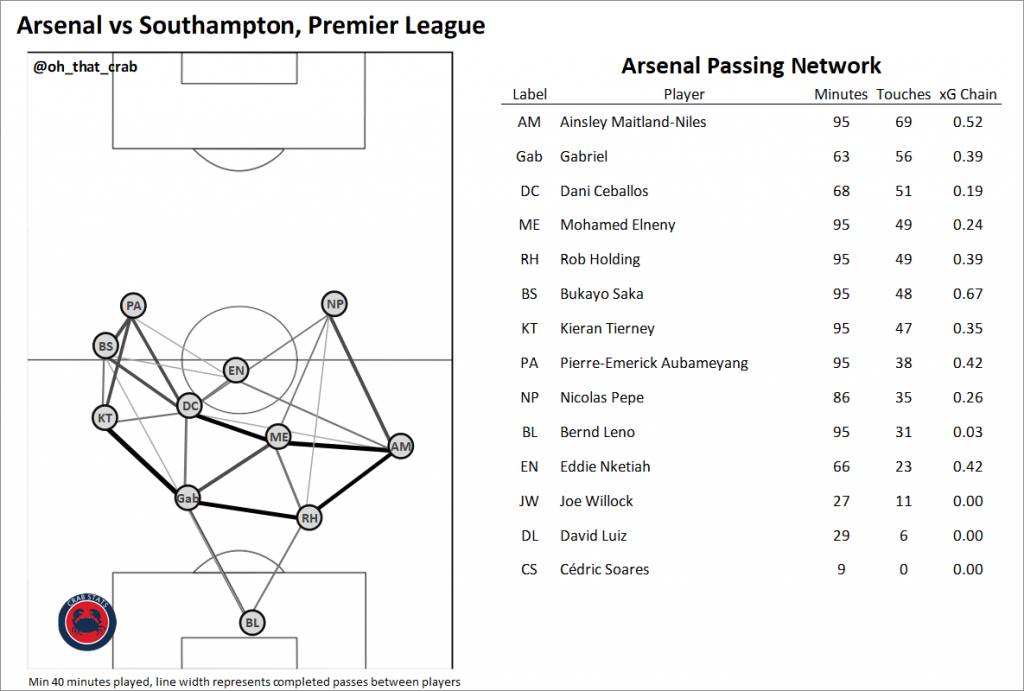 13 – Shots for Southampton, 5 after the red card

4 – Shots on target for Arsenal, 0 after the red card

3 – Shots on target for Southampton, 0 after the red card

After the fact, getting a point from this match is not too bad but looking at these high number attacking numbers I am still frustrated that Arsenal couldn’t do better before the red card.

Looking just at the table Southampton are in a much better spot than Arsenal but when you look at their actual numbers they really weren’t that different statistically than Arsenal. They have the highest over performance of their expected goals compared to actual goals in the league. They are having more of their shots go on target, with those shots on target turning into goals at rate much higher than average.

On defense, they have again been not nearly as good as their place in the table suggested. Their pressure has been effective at limiting teams from progressing the ball against them, and that has led to below average shots attempts but the shots they did allow have been very high quality.

Arsenal could not take advantage of this tendency in this match. 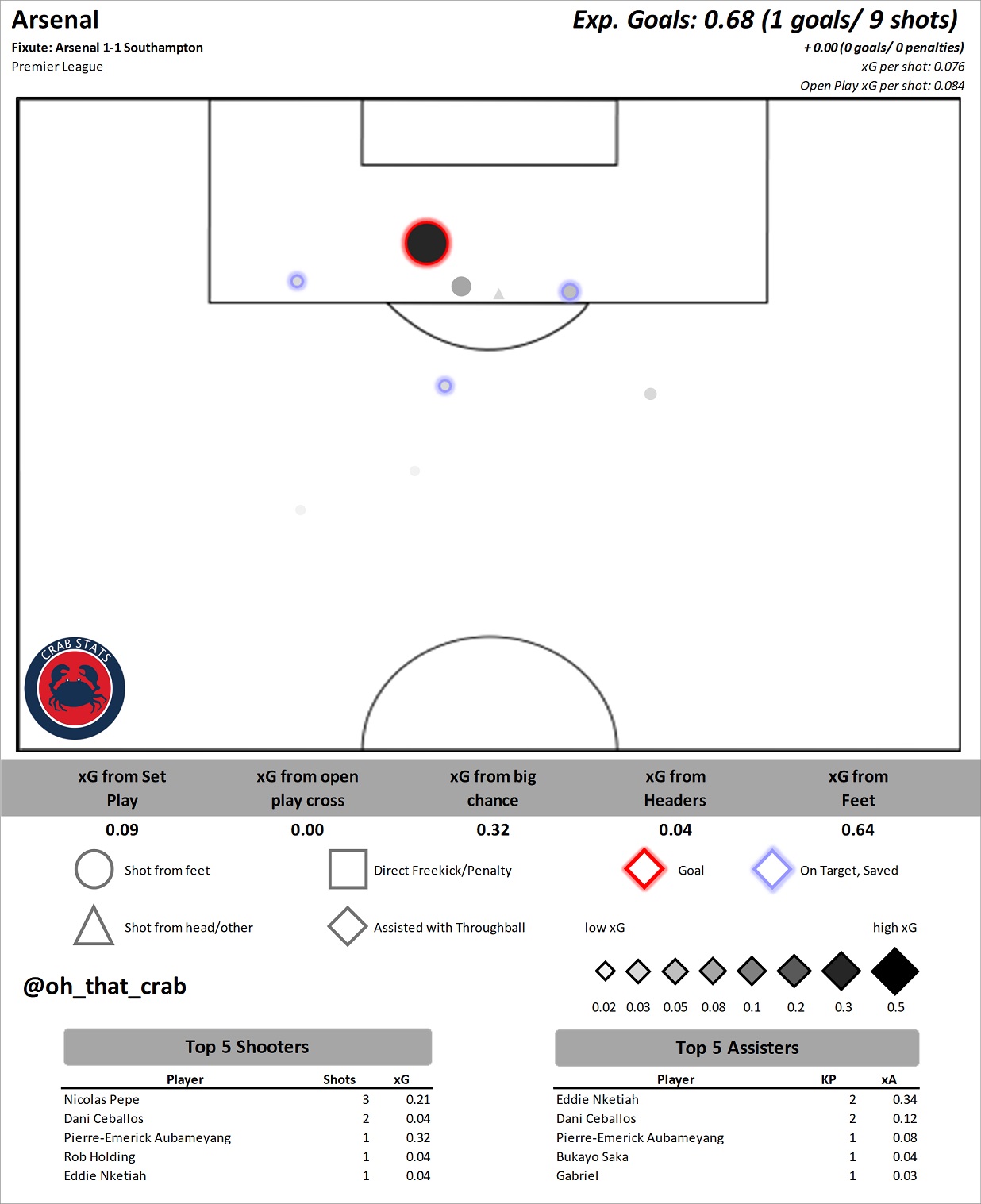 Nicolas Pepe comes back into the Premier League Squad

58.1 – Percent of passes aimed towards him that were completed, third lowest on Arsenal

4 – Touches in the box, second on Arsenal

12 – Pressure Events, third most on Arsenal

I thought it was encouraging that he was able to get 3 shots off, it was also good that two of the three were in central locations inside the box. He wasn’t able to make great contact where he looked like he might score but hey I will grasp onto anything positive right now.

What was disappointing was that again he was very isolated on the right hand side of the attack. His limited touches, he managed just 34 with only Leno and Nketiah having fewer, really limits his ability to create for others and destabilize a defense.

Right now no one looks good starting on the right hand side for Arsenal and I am starting to think that while the players might not be the greatest, perhaps the system that Arsenal employ doesn’t do them any favors either.

35 – Passes completed, second on Arsenal with a 92% pass completion rate which led Arsenal.

10 – Progressive passes completed, led Arsenal (the next highest was 4)

1 – Pass completed into the penalty area, which again was laughable tied for the most on Arsenal

4 – Times dribbled past, most on Arsenal

Dani Ceballos’ performance is hard one.

He was partnered with Elneny who did a lot of his normal things, he passed pretty safe (there did seem to be more passes that put the receiver under pressure than normal in this match) and ran around a lot in midfield. That left the ball progression duties to Ceballos and he did them pretty well. He was the most progressive passer for Arsenal and was second in yards of progressive carrying. If the job of the midfield is to connect the defense to the attack, Ceballos really seemed to do his job, even adding a couple key passes to boot.

Yet he was also part of the problem where Arsenal midfield didn’t really shield the defense leaving things very exposed at times. He was pretty easily bypassed and while he had 4 interceptions perhaps he was trying to jump passing lanes a little too aggressively at times.

This performance really seems like the type that no matter what you want to see from it, you have the evidence to support your case. He did some really good things, but had an equal number of negative actions. None of this is better summed up than his attempt to draw a penalty, it is really good and a rarity that an Arsenal midfielder makes a run where he can get the ball that close to goal but instead of trying to play the ball to a teammate his thought is to try to buy a penalty.

I think Ceballos is easily the second most talented midfielder (maybe even best, there really hasn’t been enough game time for Thomas Partey to draw definite conclusions about him) on the team but too often the good things that he does are cancelled out by bad decisions or lapses in concentration.

Sources: Opta via WhoScored, my own database. StatsBomb via FBRef

Ceballos and Mari on the mend

So would you think, with Partey out, AMN in the shielding role with Ceballos and Willock in a 433 midfield gives us our best midfield balance? Would a Callum Chambers be worth a shot as our shielding midfielder? Maybe with 2 of Willock, AMN, Smith Rowe or Ceballos with him in more box to box roles? We need to figure out the midfield in short order.

Great idea. For me, Elneny and then Chambers would be best for the DM role. We should play that formation, 4-3-3, barca style, think it would suit us the best. We have the personnel, mikel just needs to try/believe in it (as opposed to saying he lacks 5-6 players to play it which is bollocks IMO).

chambers dear god are we that desperate?

Cramped on the left, isolated players on the right, in far too many games. This lopsided formation just doesn’t work. That’s one major reason why all the players we try at RW and RB look rubbish. This isn’t how you create width on the pitch. Surely Arteta and his team must have seen this by now.

I think the loss of Partey for however long has been a massive problem. Ideally we would have bought a creative mid as well.
What we did see was that Ceballos and Elneny although not great was better than any combination including Xhaka.

At least they didn’t look to turn and pass backwards with each and every (even half hearted) pressing. We always get that with xhaka.

We definitely need to move the ball faster and look to set up Pepe more often.

No more Xhaka, please. We will never get anywhere with him at CM.

I like Dani, he tries things, generally makes good decisions and works hard. He absolutely deserves a run in the team. He does need some half-decent support around him though.

You are right, but it is criminal neglect of the squad that one loss has such impact. Last I checked, Liverpool are top of table despite losing the best central defender in the league. We are just awful at making the moves we need. Juventus won the Italian doubt in 2014/15 and again 2015/16. Then in the summer of 2016 they moved 11 players out (4-5 major players, including Pogba) and brought 9 players in (most were major contributors). And with 9 new players, the won the double *again* and make the CL final. I’m so tired of our lack… Read more »

It’s because the Kroenkes are hands-off and don’t give two shits. Poor executive decisions. John Henry knows how to run an organization and WIN, with a plan. The Kroenkes do not. If Josh doesn’t see what needs to be done, then we’ll just go the same route as Forest.

Great write up as always!

Ceballos as 2nd best or top MF is such a damning indictment. He’s 24 so should be in/entering his prime. He’s sloooooow — almost as slow as Xhaka. Everything with him takes so damn long to happen.

you have to question artetas judgement for resigning him and luiz. keeping the core of a squad that had a disaster of a season in the league was bound to end in tears.
nothing ever changes we hear talk of squad overhauls and clearing dead wood every summer it never happens

Ceballos was excellent towards the end of last season and the majority of fans were happy to see him back for another season. Like several players he is not showing his best form but you mustn’t blame Arteta for resigning him. Luiz with the odd exception has looked good since Arteta took over so I can’t blame him for that either

Ceballos has never been “excellent.” I really don’t mean to be snide, but watch the league… he wouldn’t start for any club in the top half of the table. He’s 24 and can’t even make RM’s bench. If he didn’t have the RM brand halo, we wouldn’t give a shite about him.

Man, look at that passing network diagram. I am not sure if those are statistically averaged positions? Or are they visually approximated by the author? Either way it matches my (typically hazy) mental map pretty well. if they’re statistically averaged positions you can see why AMN’s passing percentage was so low. He gets the ball more than any player on the squad and if he wants to go forward he’s got to hoof a pass halfway up or across the pitch to the next nearest player! Couple that with Pepe’s low pass reception rate and right there is one problem… Read more »