Arsenal 1-1 Southampton: By The Visuals

Arsenal managed to avoid a 5th consecutive home defeat for the first time in the clubs history as Mikel Arteta’s men drew 1-1 with high-flying Southampton at the Emirates Stadium in yet another game in which Arsenal failed to finish with 11 men on the pitch as Arsenal’s ill-discipline continues.

It continues Arsenal’s run of red cards, with the Gunners having picked up more yellow cards (109) and red cards (8) than any other Premier League team in the last 2 seasons. If Arsenal want to reverse their poor form so far this season, then being able to finish a game with 11 men consistently would be a good start.

Anyway, let’s look at the data to see if we can gain any insight into Wednesday’s game. 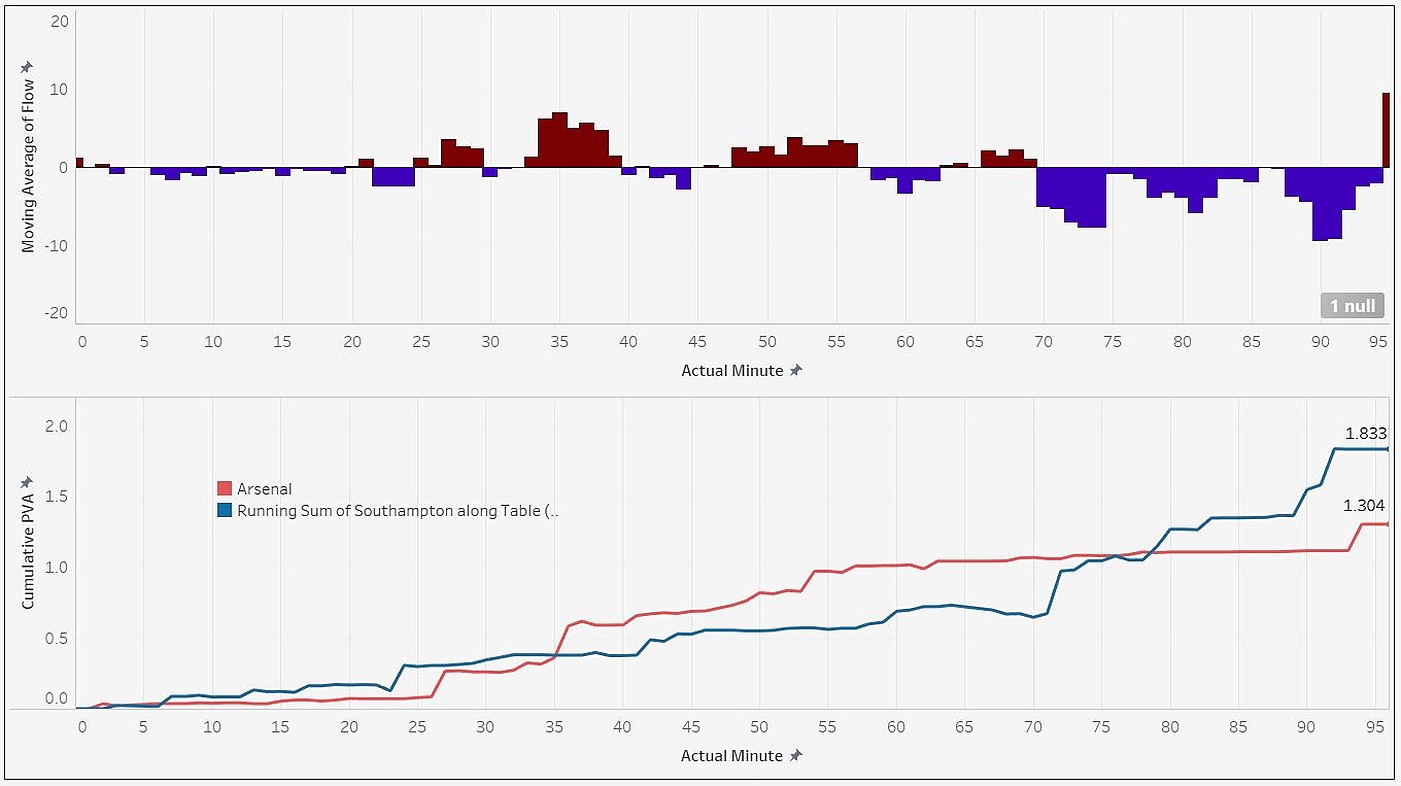 Above is the PV flow and Cumulative PV from the game at the Emirates. Arsenal started very slowly, but for all their possession, Southampton did not cause Arsenal many problems, with the Saints only creating 0.8 xG before Gabriel’s red card (read Scott’s By The Numbers) and Arsenal managing to create a few promising attacking situations on the counter. It wasn’t a very good performance from Arsenal but in the 10 minutes between Aubameyang’s goal and the Gabriel red card they looked as if they could make a decent push for a winner, but yet another red card meant it was a tense and nervous 30 minutes, as Arsenal were camped inside their own box heading crosses away as Southampton completely dominated the game. 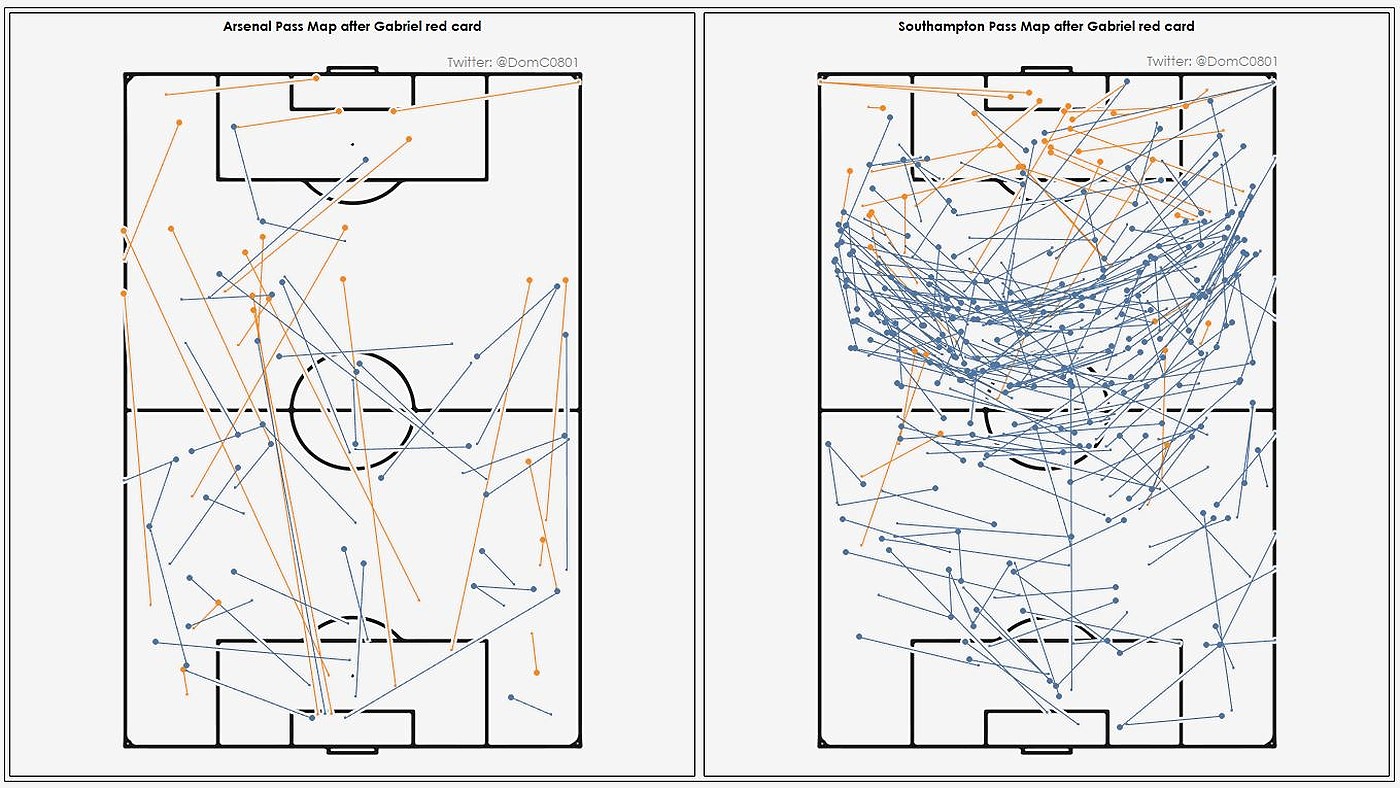 Above are the pass maps for both teams after Gabriel’s sending-off. Southampton completely dominated the ball with Arsenal only managing to progress a few times down the left wing through Bukayo Saka and co. This further accentuates the problems Arsenal face when going down to 10 men as the need to not lose takes over any desire to win. 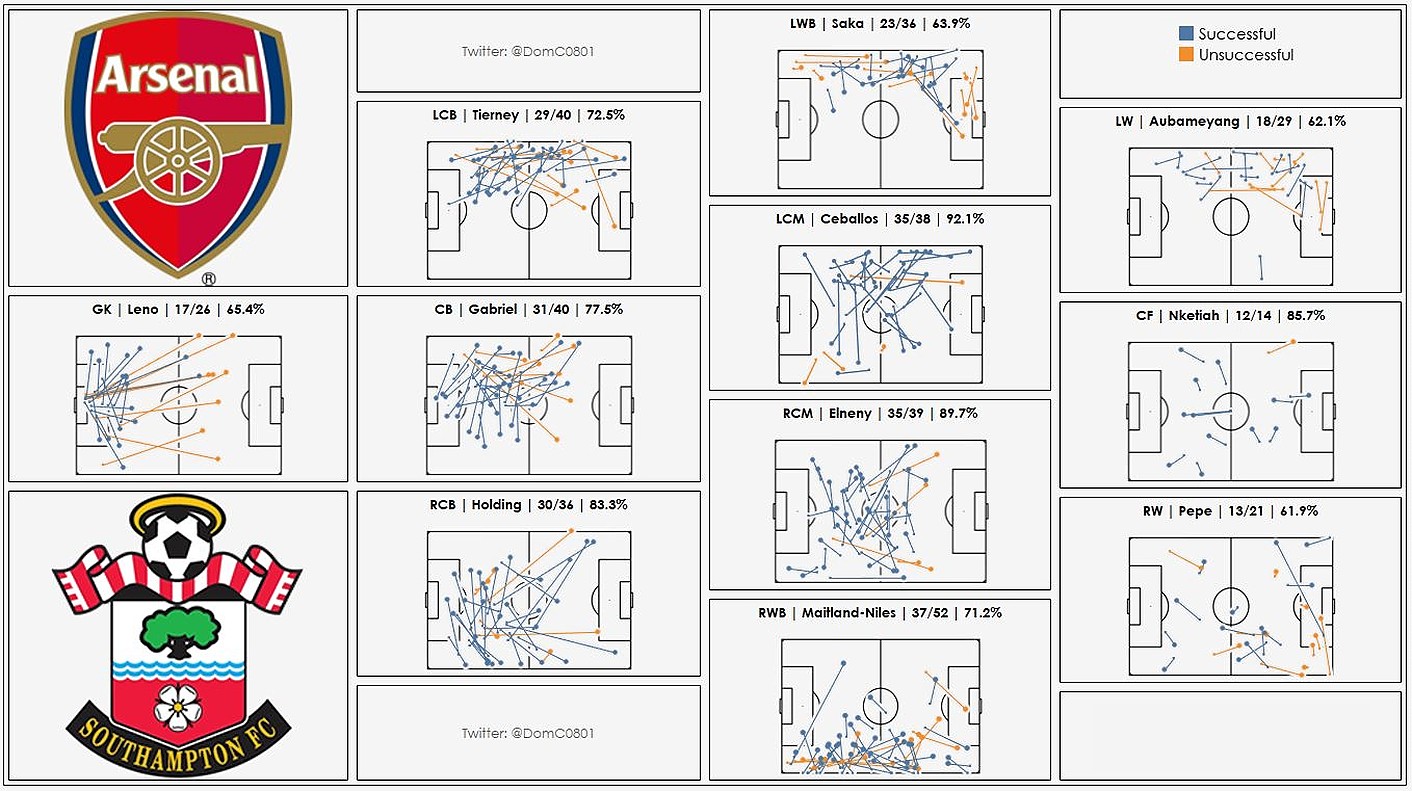 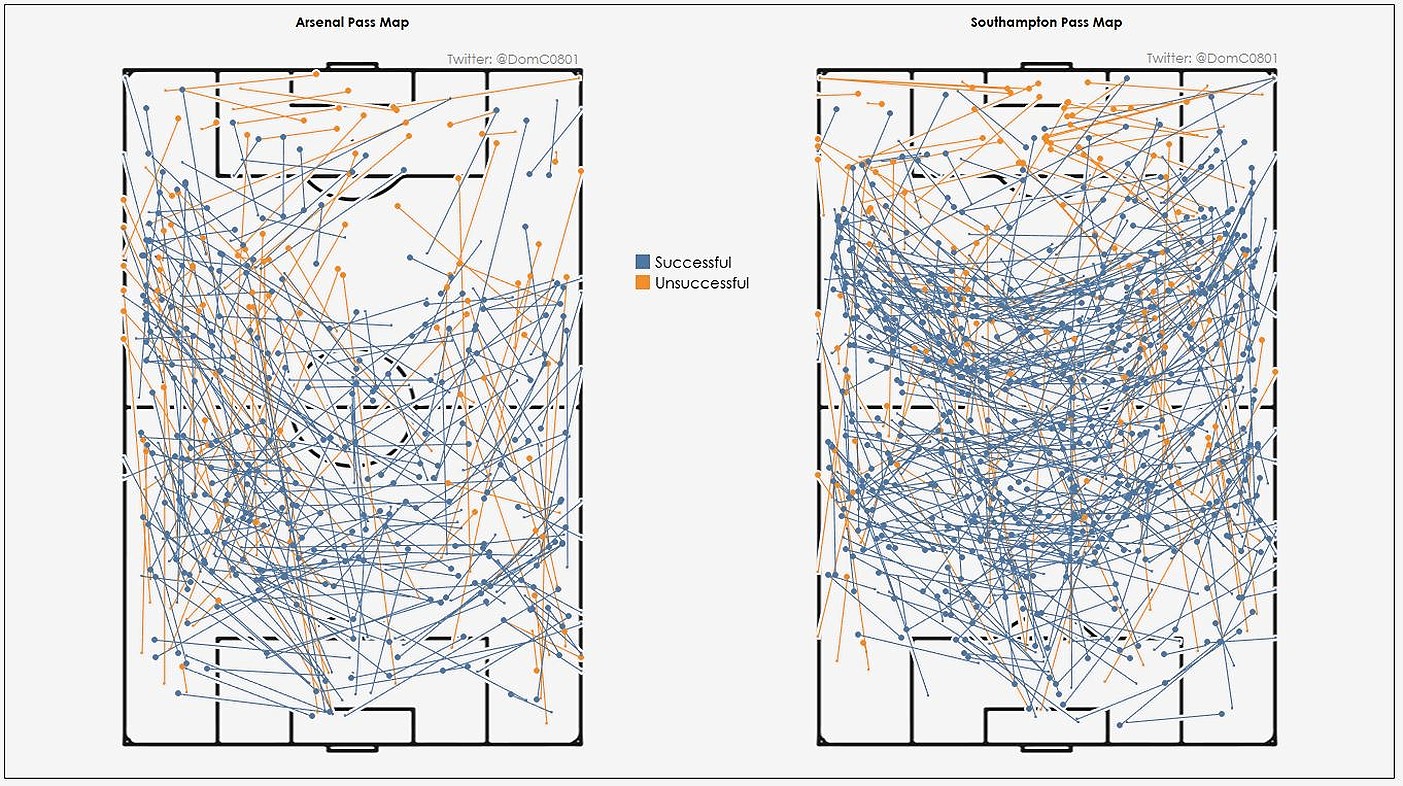 Above are the pass maps for each of Arsenal’s starting XI as well as the full match pass maps for Arsenal and Southampton. What is evident is that Arsenal continue to lack a presence in ‘Zone 14’ (the number 10 space) and that that is a problem they most definitely need to address in the January transfer window if no internal solution can be found. Also notable is the left-sided bias in Arsenal’s possession play, with Nicolas Pepe and Ainsley Maitland-Niles struggling to impose themselves in Southampton’s half. I would like to highlight Bukayo Saka’s pass map, because every week my love for him grows stronger and I truly believe that signing him to a long-term deal could be the best deal we’ve done for years as he truly has gamechanging ability at such a young age. 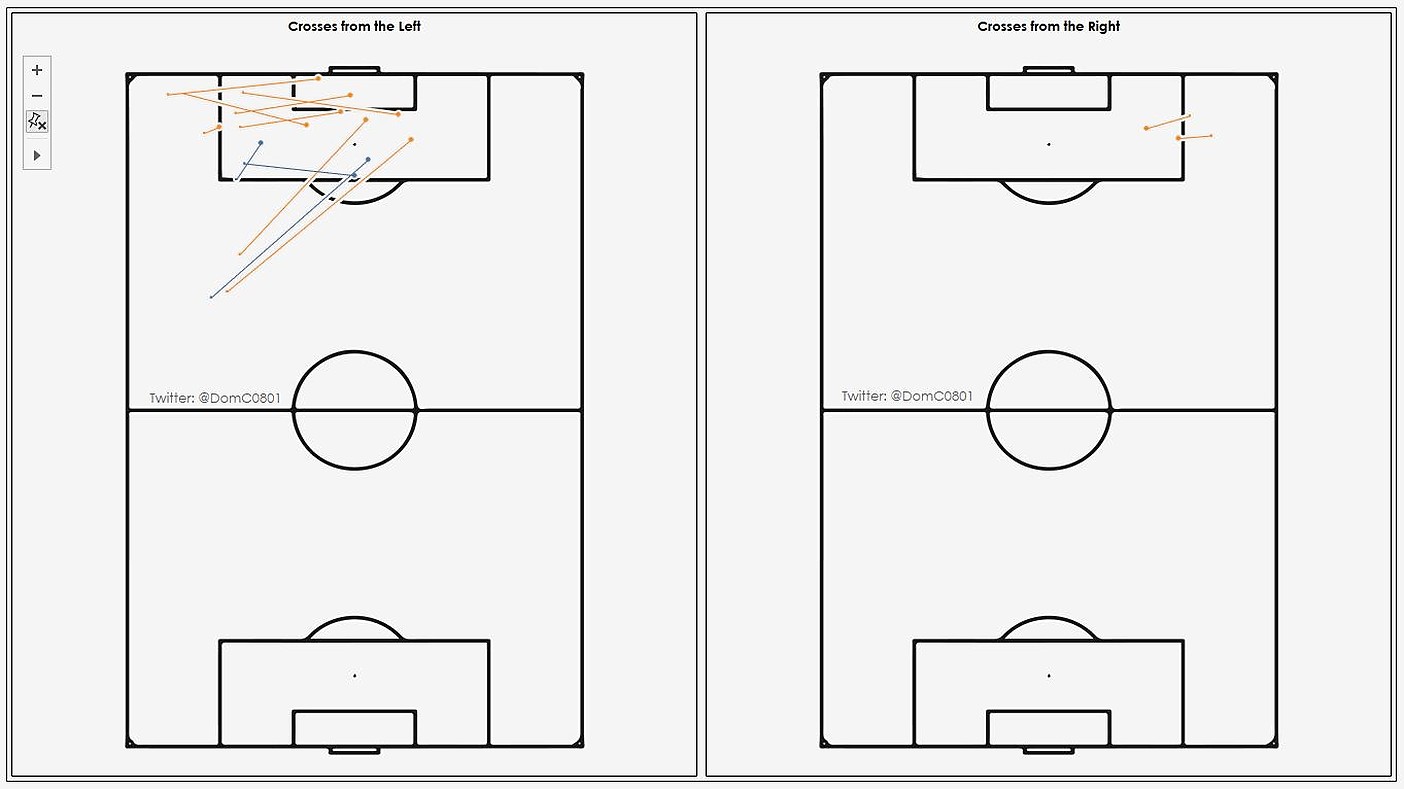 Arsenal’s switch back to the 3-4-3 system seems to have had an impact on Arsenal’s crossing strategy, as the Gunners looked to work the ball inside on numerous occasions instead of curling crossing in towards Southampton’s gigantic defenders. Hopefully this means we are slightly going rolling back the crossing obsession that has not produced any tangible results. 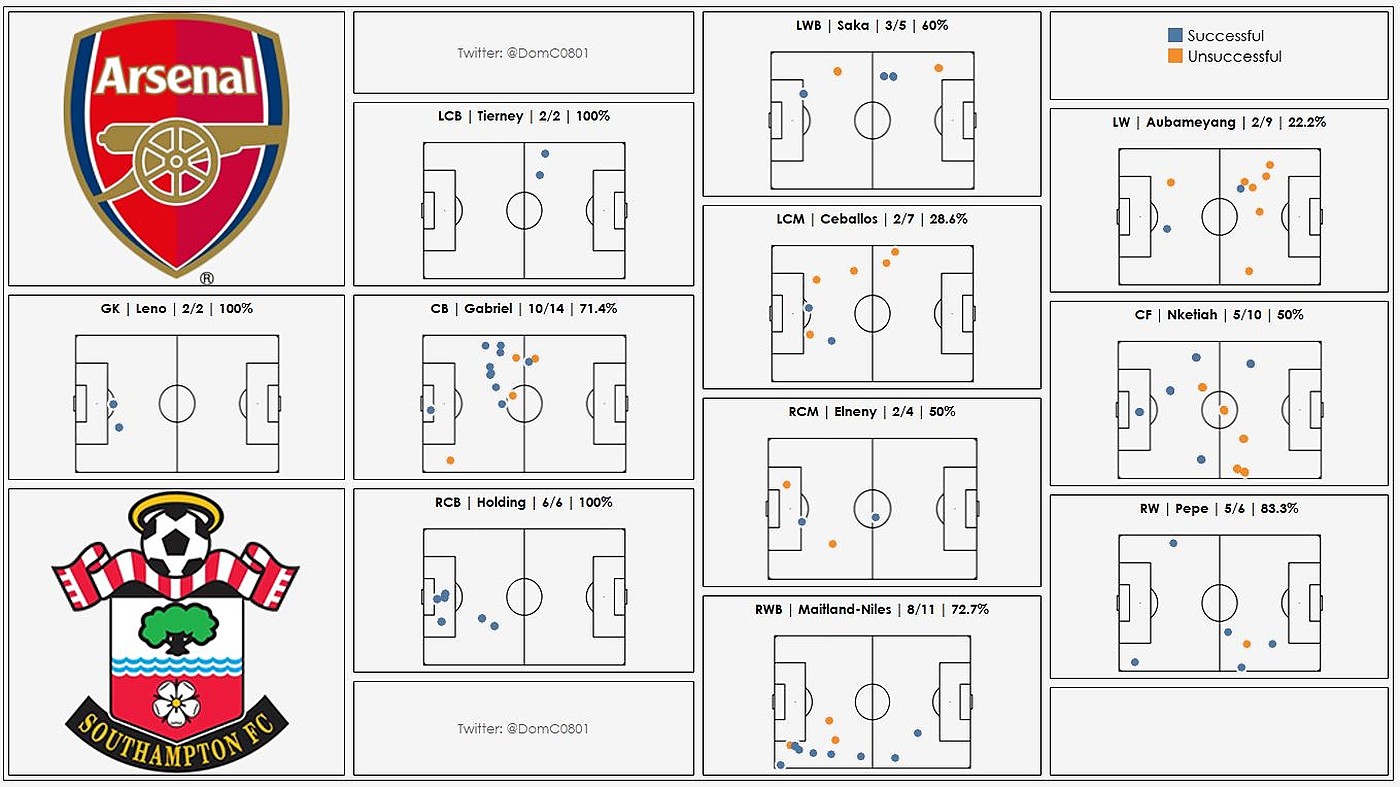 As the game turned into a classic rearguard action for the Gunners it felt only right to show the Defensive Actions (Tackles, Interceptions, Headers, Fouls, Blocks and Keeper Sweeping Actions) from each player. Gabriel’s defensive actions paint the picture of a player desperate to make a positive impact who ultimately showed his inexperience by going into a challenge with Che Adams and dragging him down when he got spun. Arsenal’s midfield didn’t make a massive impact defensively however Ainsley Maitland-Niles again proved his defensive prowess at RWB as he filled in for the suspended Hector Bellerin and it will be interesting to see if he has done enough to usurp the Spaniard. Rob Holding put in a brilliant display as Arsenal pushed back into a deep block to see out the game, letting Holding deal with crosses into the box without the need to worry about the space behind him, an area in which the Englishman excels.

That’s all for now, it’s Carlo Ancelotti’s Everton at Goodison Park this weekend before an EFL Cup Quarter-Final against Pep Guardiola’s City next week and Arsenal really need to start picking up points if we are to salvage any positives from this season.

Previous articleArsenal 1-1 Southampton: By the numbers
Next articleLeno: You can’t inject confidence like a vaccine

Arsenal 0-0 Burnley: By the numbers

Nice to see another team with the dreaded horse shoe.

Man, that donut hole in the 10 spot is so obvious during the matches, and it’s killing us.

That doughnut shaped hole could easily be filled by ESR, and the empty space on right byline by Nelson. Please give them a chance!

Is it just me or when I see pepe starting in the premier league I think today could be the day only to be left underwhelmed once again.Really starting to feel the premier league is a step to big for him.He should sit down and watch his cup final performance over and over again as this is the level of performance required on a consistent basis.

Timorous Me
Reply to  Marco

The more it looks to me like he’s being utilized poorly–or at least being involved poorly by his teammates.

Maybe he could do more to get the ball in dangerous areas, but it seriously feels like every time he gets the ball out on the right he’s immediately swarmed by at least two defenders and has nothing to do. He just seems so isolated out there. And I have to think our agonizingly slow buildup play is really to his detriment.