Arsenal 3-1 Chelsea: By the numbers

I hope that everyone had a great Christmas, because I know if they were an Arsenal fan that they had a great Boxing Day!

I don’t think that many fans, except for maybe a few irrational optimists expected Arsenal to perform as well as they did in this match. It is fun to be on the other side of getting out to an early lead, scoring with a little fortune and then being able to see out the result late.

Arsenal 3-1 Chelsea: By the graphs 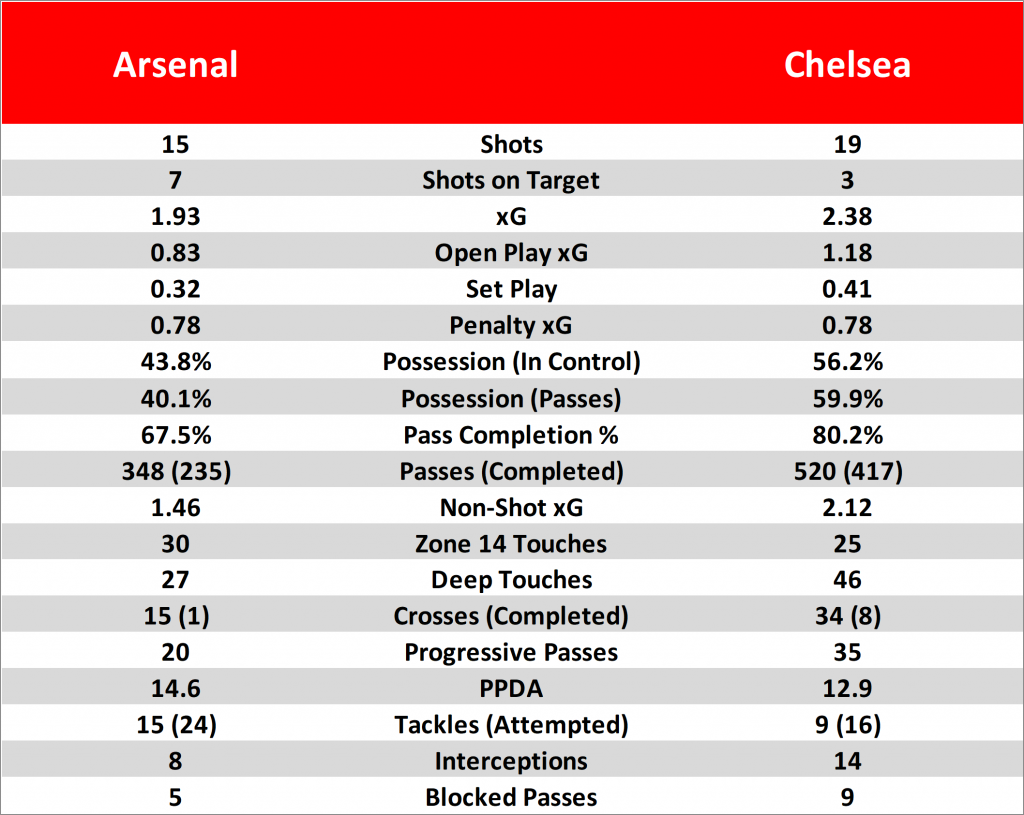 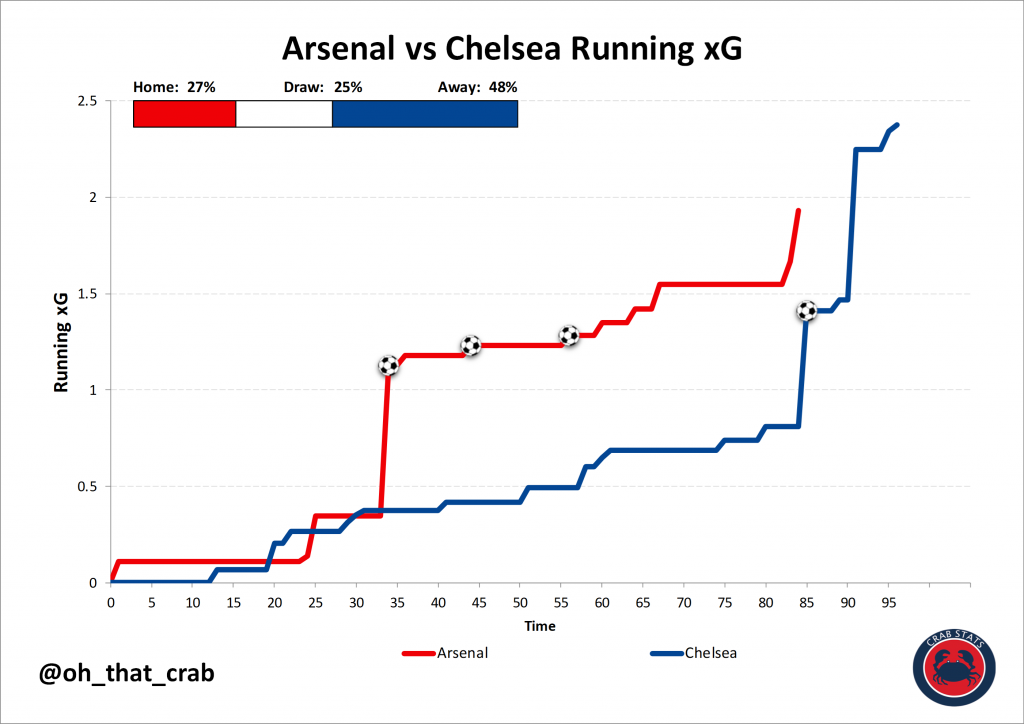 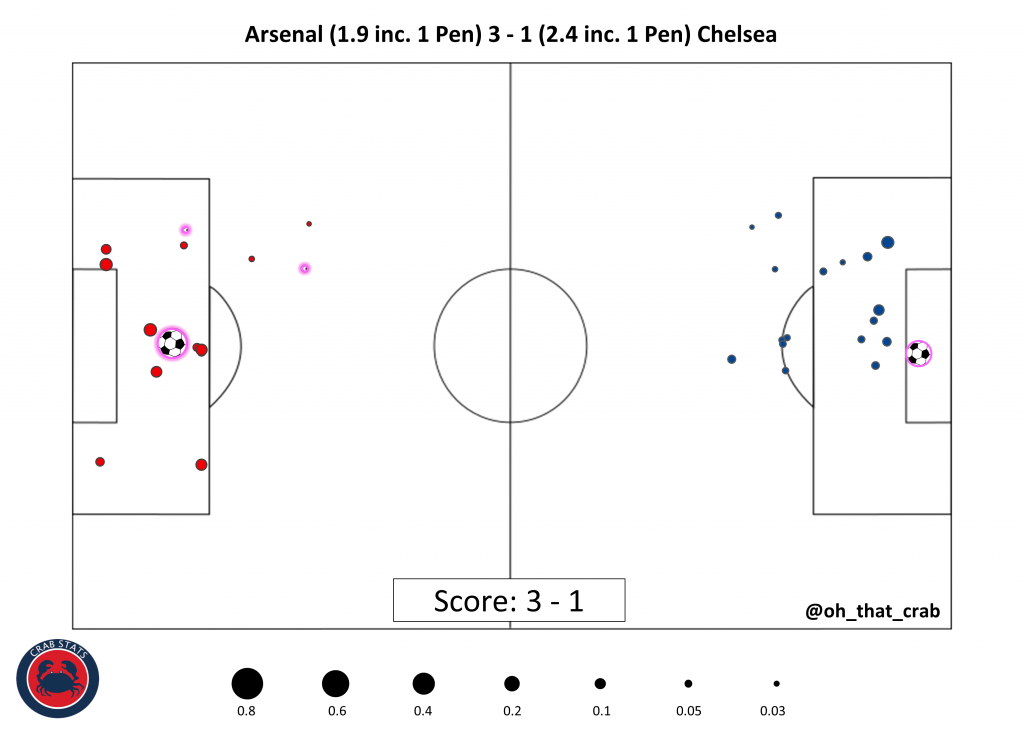 Arsenal 3-1 Chelsea: By the numbers

20 – Progressive passes completed by Arsenal, 19 in the first 75 minutes

35 – Progressive passes completed by Chelsea, 29 in the first 75 minutes

Arsenal fans are becoming experts in identifying game state effects. Mikel Arteta was talking last week about how Arsenal didn’t deserve to lose some of the matches that they had lost based on the chances that they created. There is a certain truth to that, but it also ignores the major effect of the score on how aggressive each team will be in their attack (I looked more deeply into this here).

This match was a good example of that, but with Arsenal in the lead this time.

Drawing the line at 75 minutes (doing a bit earlier probably makes this more dramatic) you can see from the stats above that Arsenal were essentially even on most stats and ahead in the ones that mattered the most.

69.6% – Pass completion percentage for Arsenal in this match, the second lowest this season.

216 – Passes completed for Arsenal that were less than 30 yards, the second fewest this season.

Another interesting change in this match is that Arsenal were much more direct than they have been this season. Arsenal played over 24% of their passes in this match over 30 yards which is the largest proportion this season and well above the average of just 19%. This directness seemed to work well with the youthful energy Arsenal deployed in this match.

7 – Shots from the trio of Martinelli, Saka and Smith-Rowe, led by Martinelli with 4

11 – Touches in the box for the trio of Martinelli, Saka and Smith-Rowe, led by Martinelli with 6

58 – Touches in the final third for the trio of Martinelli, Saka and Smith-Rowe, led by Saka with 24

2 – Dribbles for the trio of Martinelli, Saka and Smith-Rowe, 1 each for Saka and Martinelli

4 – Progressive passes for the trio of Martinelli, Saka and Smith-Rowe, led by Saka with 2

54 – Pressure events for the trio of Martinelli, Saka and Smith-Rowe, led by Smith-Rowe with 20

14 – Pressure regains from the pressures applied by the trio of Martinelli, Saka and Smith-Rowe, led by Smith-Rowe who led to Arsenal getting the ball back 7 times

4 – Tackles by the trio of Martinelli, Saka and Smith-Rowe, led by Martinelli with 2

5 – Interceptions and blocked passes by the trio of Martinelli, Saka and Smith-Rowe, led by Saka with 3

I don’t think that any of these players had an outstanding match that would fill up a highlight reel, but they were able to provide things that have been very obviously missing from Arsenal this season.

All three of them were flying around the field, making life hard for the Chelsea players. In this match, Arsenal pressed more than they have in any other match this season. I think that a major factor in that was the energy provided by these young players. Arsenal had 42 pressure events in the final third, with 20 of them coming from these 3 players and 10 coming just from Martinelli!

I think that it was also refreshing to see a player who looked comfortable trying to take up positions in the pockets of spaces between the defensive lines, which Smith-Rowe was constantly trying to do. His stat line wasn’t spectacular but the impact of his positioning and willingness to try things really seemed to help Arsenal feel more fluid in attack.

I don’t want to put too much pressure on these young players but it was pretty obvious that they provided a spark that was much needed in a team that was looking devoid of attacking ideas. Hopefully this will be a turning point that the whole team can build upon.

Sources: Opta via Whoscored, my own database. StatsBomb via FBRef.

Previous articleArteta impressed by Tierney/Martinelli combo
Next articleArsenal 3-1 Chelsea: By The Visuals

Good to see the youngsters step up and perform

Really interesting that our passing percentages were so much lower than usual–fewer easy, safe passes. I have watched a bunch of recent Chelsea matches, and I noticed that they were most effective when Kante was allowed to roam (and control) the entire middle of the pitch. The solution to that is to play wide to bypass him, and cut into the centre, whether carrying the ball or with a pass, high up the pitch. I thought both Tierney and Bellerin were excellent in doing exactly that. I’m wondering if you have any statistics that either confirm or cast doubt on… Read more »

I hope Arteta doesn’t say Martinelli needs time any more. Arteta needs Martinelli…type of players, who gives their all. Most of our issues in the last few matches has been down to (lack of) effort, in good part.

Looking forward to the next match now.

If we had had Willian and Luiz on the pitch we would have lost, we had so much more with Mari and the youngsters.

Also with Partey, Gabriel and Auba to feature we must pick up in some matches due to them.

Not getting too excited but not quite as concerned about relegation as I was.

While certainly saka/martinelli are an upgrade on recent Willian performances, I was less convinced by Mari. I’d rather have Gabriel over either if of them. Luiz has been OK recently and Mari had a kinda luizesque performance in some ways. He did some stuff well, but made some clumsy challenges and nearly cost us with the penalty.

Yeah you’re right, I dont think people would be singing Mari’s praises if Leno hadn’t made that save from penalty and if we had bottled the lead subsequently.

Imagine Mustafi conceding a penalty like that after playing well for 85mins, we would be much less forgiving than this.

Seven shots on target (setting aside the goals) – that’s about as many as we managed in the last three games. Let’s hope that we can push on over the next run of PL games. There’s a warning from recent experience though – we had a good win against Utd (seems so long ago now, doesn’t it?) but we fell apart after that. History doesn’t repeat itself exactly, and neither does football but fingers crossed nevertheless.

The United win really was a lot more lucky though in that we really didn’t threaten at all outside the penalty. We only had 2 shots on goal that game including the penalty. This was much more productive offensively which if we keep it up bodes well.

Just hope we don’t fall in love with xhaka all over again. He’s shown he can play a role when we sit deeper, but he’s also shown he’s a liability when we’re trying to control the game and the Tempo. He’s a squad player at best. Once partey is back if he is more than that then… 🤷
More martinelli, Saka, ESR, Willock, AMN, tierney, Nelson and balogun… Out with the old, in with the new!

100 percent. The last 2 months have clearly shown from very serious issues that need to be dealt with – a lot of our players need to be replaced

We shall see in the next two games if the win against Chelsea was an anomaly or a turning point. We have 5 wins in the leauge and 2 were against Man utd and Chelsea. Arteta has to come up with a system to beat the likes of Brighton and Villa.

Yes, although we’ve lost against other so called “big clubs” this season so it’s really a question of coming up with a system to beat the likes of whoever we’re playing – big, small or the Spuds.

We do fine against teams who don’t sit back against us. But 75% of teams are doing a Burnley against us.

I qualify this by saying I know nothing compared to others but it seems to me that all methods of attack are more effective when you have options – whether you deploy them or not – as long as the opposition recognises those threats. For example, an Arsenal that can’t pass through a team and plays long, direct passes is easy to control. You know what they will do (they have no choice) and can sacrifice a little of your own set up to focus on these direct balls. An Arsenal that has the youth and energy to capitalise on… Read more »