Arsenal 3-1 Chelsea: By The Visuals

Arsenal recorded their first league win for 55 days as a much changed Arsenal side ran out 3-1 winners over Frank Lampard’s Chelsea. It was a game that ended a lot of bad runs, as not only did the Gunners end their second longest winless run in Premier League history, but they also scored more than 1 goal in a game for the first time since a 2-1 win over Sheffield United on the 4th of October. Hopefully a victory against a ‘Big 6’ rival can prove to be the catalyst that reignites Arsenal’s season.

Let’s delve into the data and see if we can gain any more insight from a brilliant St. Stephens Day win. 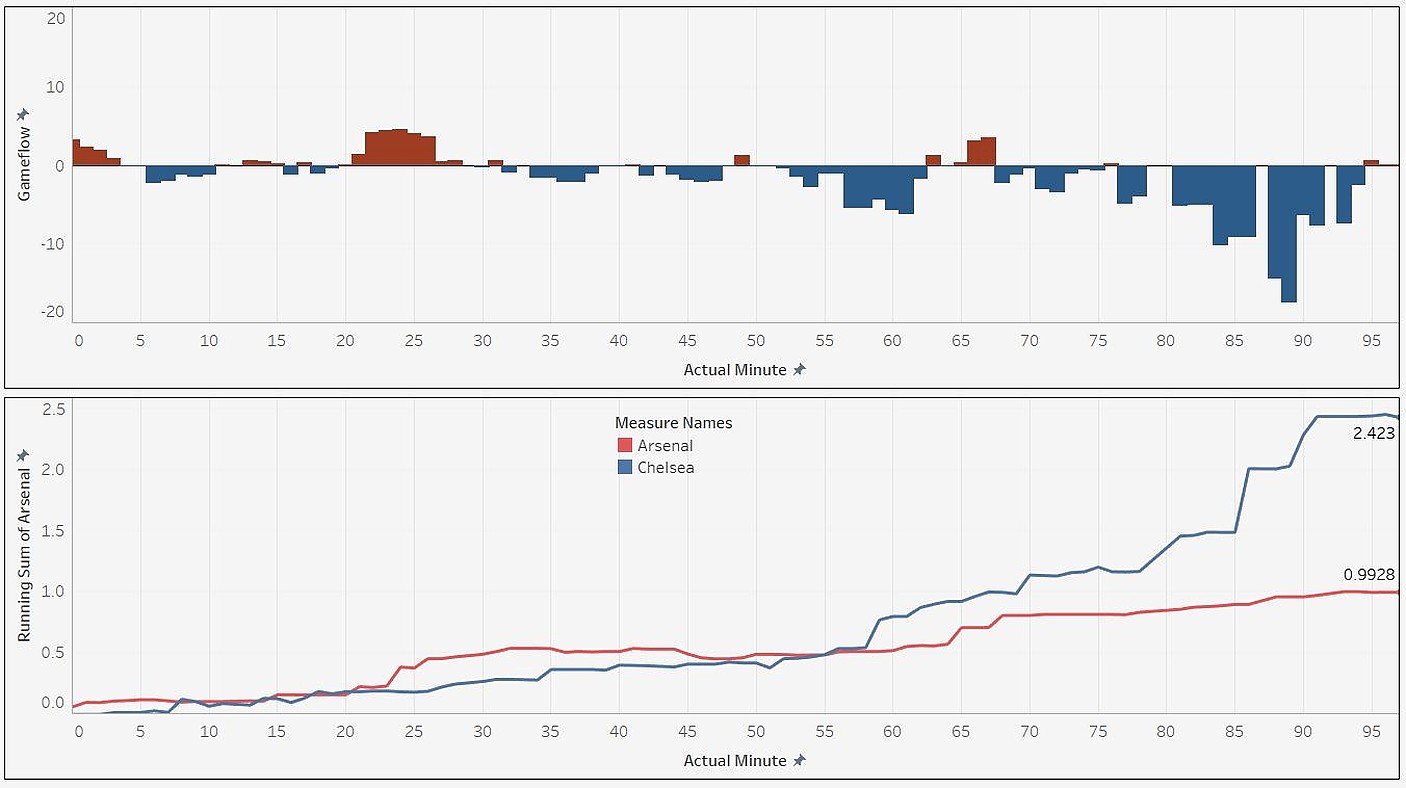 The above graph shows the PV Gameflow and Cumulative PVA from Saturday’s victory. Arsenal mostly dominated the opening proceedings, even though Chelsea were still able to progress the ball well, but Frank Lampard’s side really began to trouble Arsenal mid-way through the second half. Now I’m sure we’ve all become very familiar with the idea of ‘Gamestate’ in recent weeks, but there is definitely an argument to be made that Chelsea’s late dominance came as a result of Arsenal being 3-0 up after 56 minutes and being afforded the luxury of sitting back to defend a 3 goal lead. Arsenal did a much better job of converting good PV into good chances as we recorded an xG of 1.93 (from Scott’s By The Numbers) and recorded our 2nd highest shot total of the league campaign so far. While Arsenal were no doubt helped by Chelsea having a very poor start to the game it is very encouraging to see Arsenal’s more youthful side taking the game to a side who were heavy favourite’s coming into Saturday’s game. 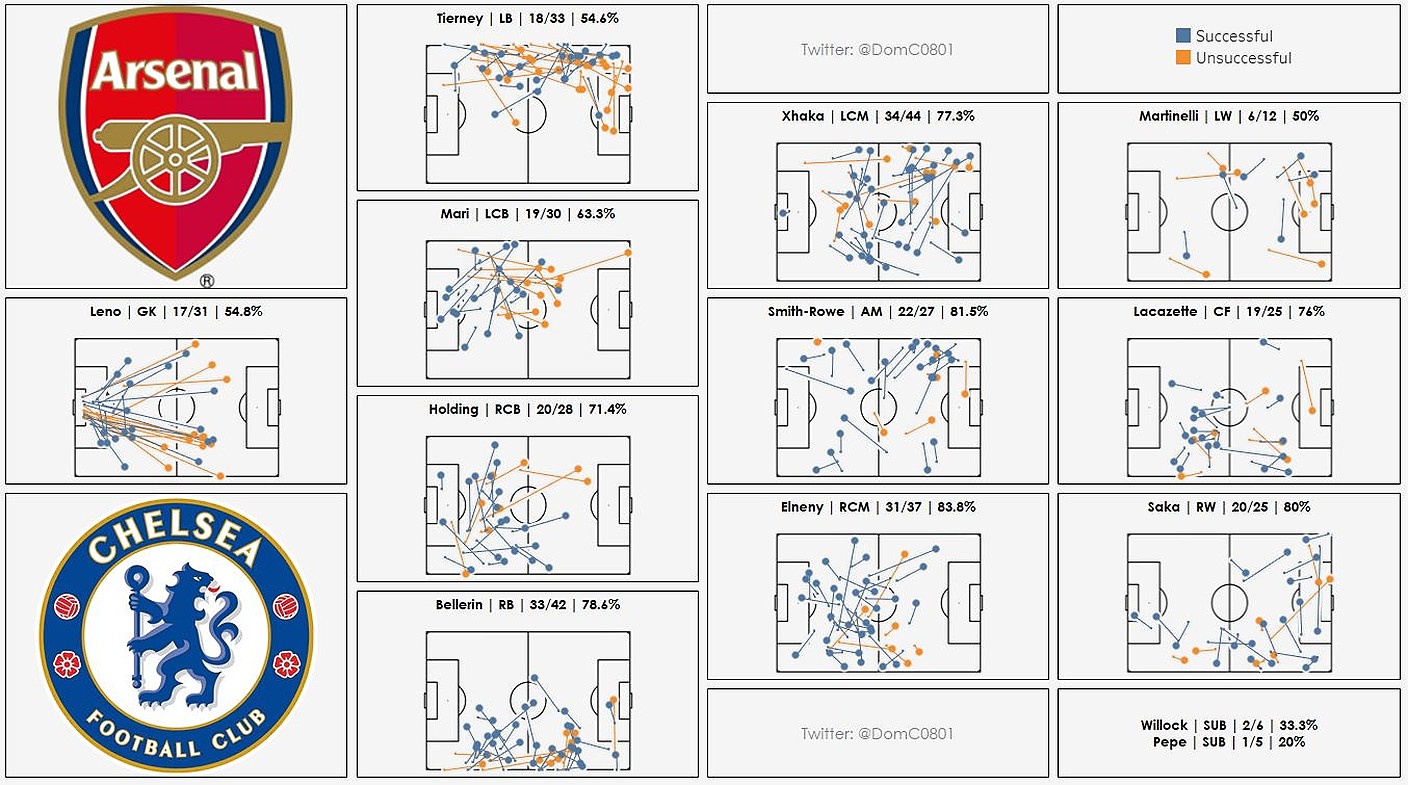 The above shows the Pass Maps for each of the starting XI from Saturday’s game. What is notable is how much Emile Smith Rowe helped Arsenal create overloads on the left. The 20 year old Hale End graduate combined brilliantly with Gabriel Martinelli and Kieran Tierney all game, with the 3v2 numerical advantage they had on the left wing being the source of most of Arsenal’s dangerous play prior to the substitution of Smith Rowe. What is also notable are the significantly lower than normal pass completion percentages from most of the Arsenal XI, with the Gunners seemingly more willing to try riskier passes as their confidence grew after a good start. Arsenal also had a much more active presence in central attacking areas, with Smith Rowe, Lacazette and Saka all occupying these spaces and getting in behind the Chelsea midfield consistently.

The above tweet show the Passing Networks for the game (made by the brilliant Scott Willis). It shows just how closely linked, Martinelli, Smith Rowe and Tierney were with Bukayo Saka, Alex Lacazette and Hector Bellerin almost replicating this on the other side. These close triangles allow Arsenal to create natural attacking rotations and pulled Chelsea defenders out of position leading to space being created in behind (read Lewis’ Tactics Column for more in depth analysis of this here). If Arsenal can continue to replicate a shape like this, then chance creation will become much less of an issue in future. 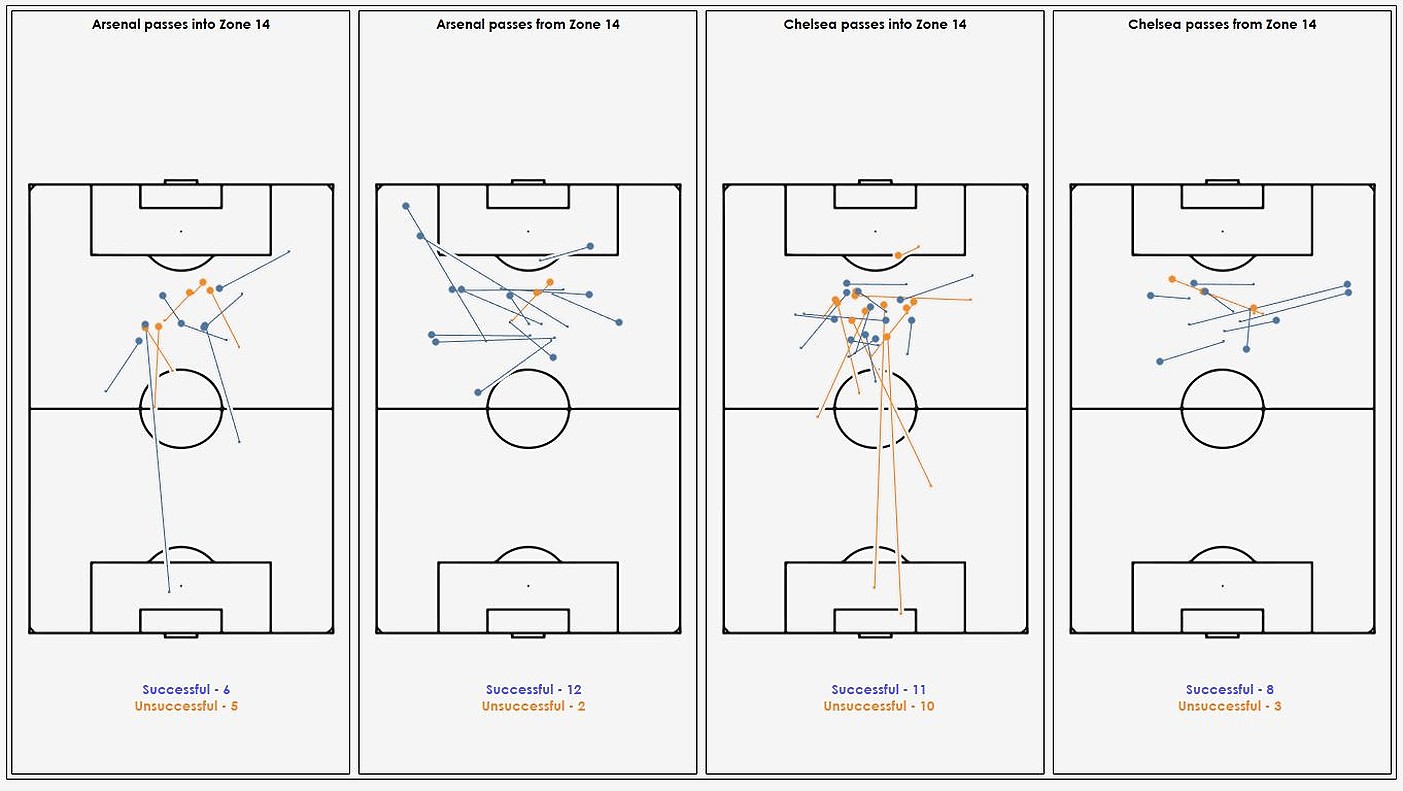 As I said earlier, Arsenal managed to occupy central areas in attack much more frequently than we have of late. This is emphasised by the above ‘Zone 14’ pass maps for both sides. Arsenal managed 12 passes from ‘Zone 14’ (the area an Attacking Midfielder would usually take up) which allowed Arsenal to have variety in their attack. These Zone 14 passes forced Chelsea to narrow their defensive width slightly which allowed Kieran Tierney and Hector Bellerin to push into a lot of space out wide. To see this coinciding with the introduction of Emile Smith Rowe shows that if Arsenal can continue to find ways to involve him, that we may be able to consistently threaten opposition defences. 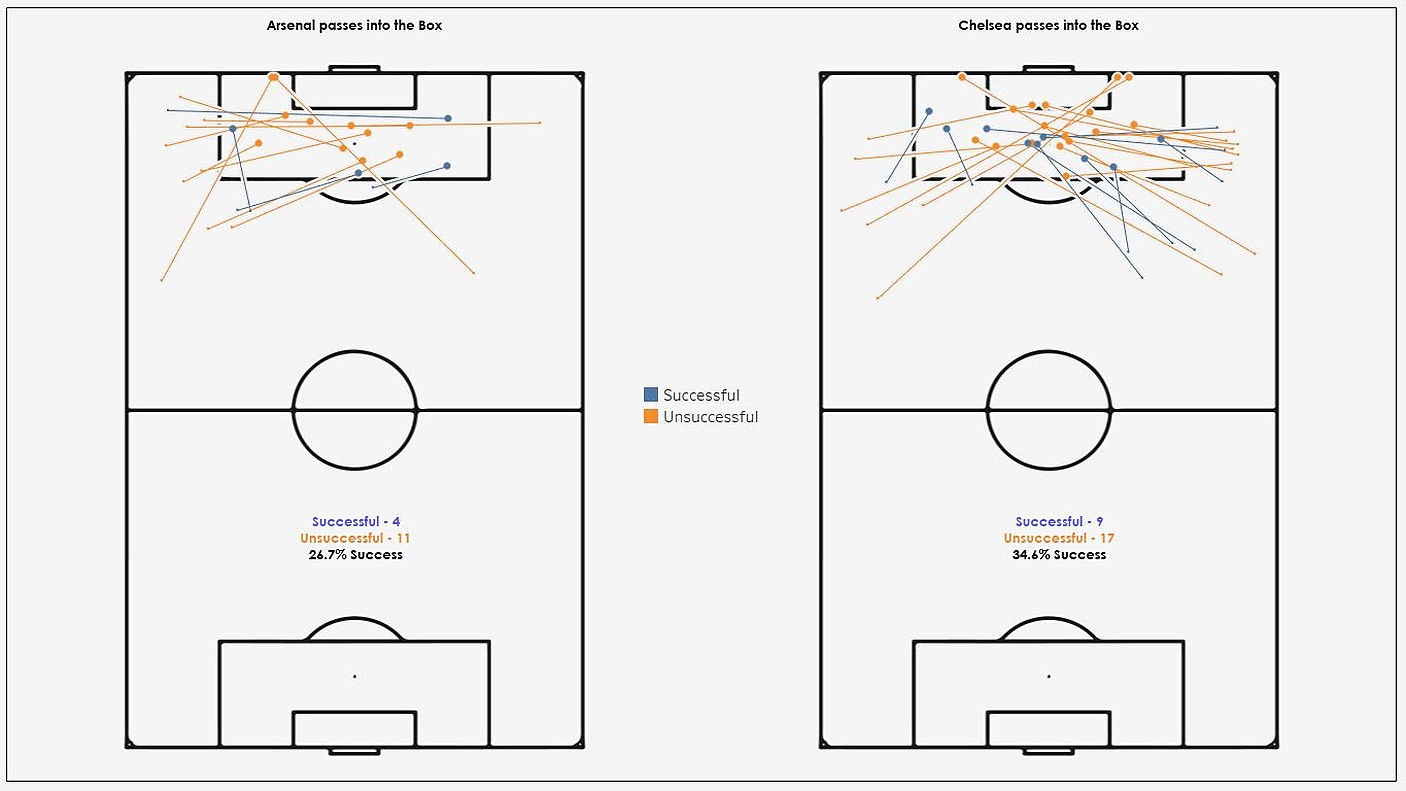 The above shows the successful passes into the penalty area from Saturday’s game. Chelsea resorted to crossing from the right wing (something we’ve seen plenty of as Arsenal fans) and the introduction of Callum Hudson-Odoi meant these crosses were much more threatening later in the game. Arsenal’s left-hand side again proved to be our best method of getting the ball into the box. 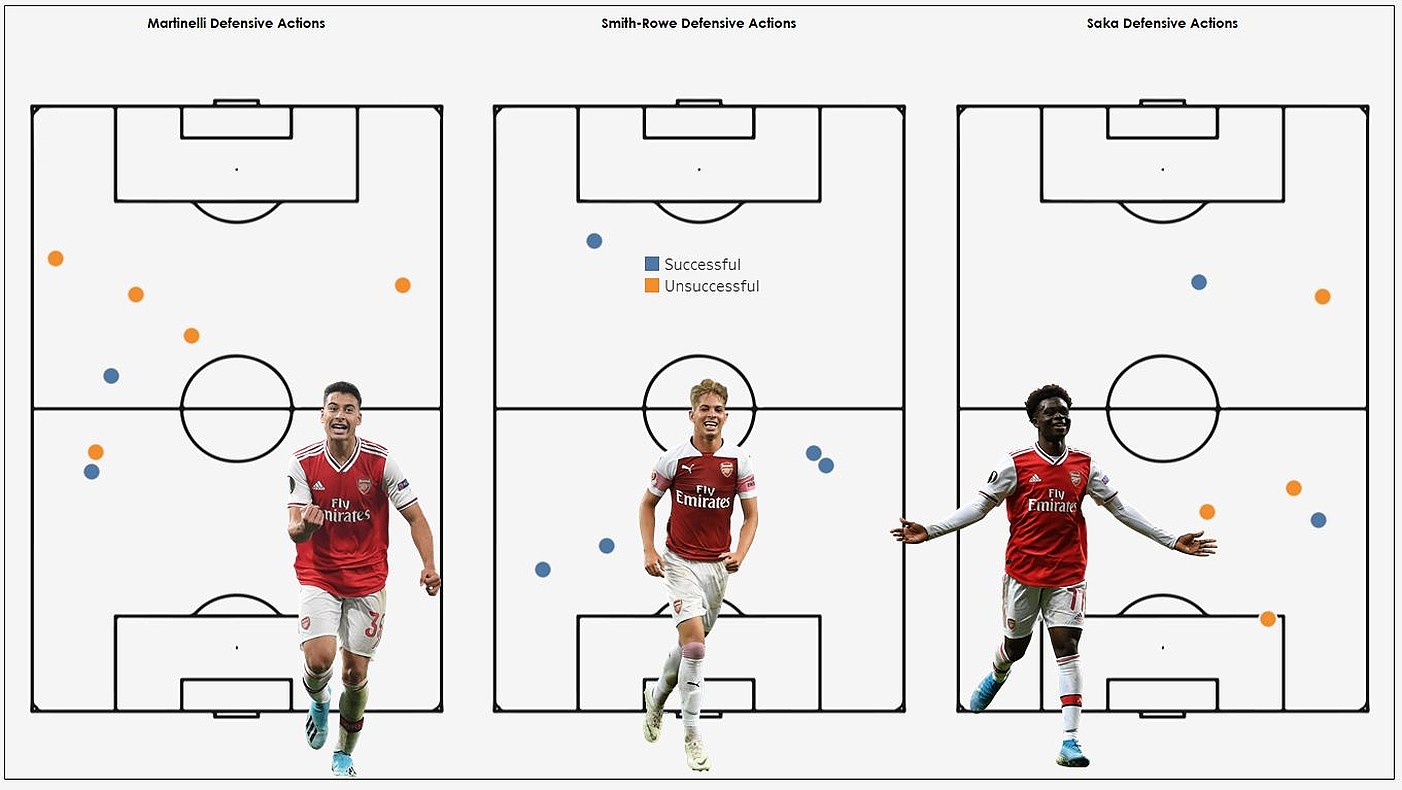 The last thing I would like to highlight is the intensity of pressing that our young trio behind Lacazette showed. The trio gave Arsenal an intensity and speed of pressing we haven’t seen for months as the Chelsea defence could not find a way past the press in the first half. Mikel Arteta may find it difficult to justify dropping any of the three as the performances they put in are surely worthy of a run in the team.

That’s all for today, and it’s on to Brighton at the AMEX on Tuesday in what looks a much more winnable game after Saturday’s events.

Thanks for the visuals Dom. I’m wondering whether the win was due to different instructions for the team – more adventurous passing, counterattacking in numbers from deep, letting Saka cut inside from an inverted position – or if it’s simply a question of different personnel.

Arteta’s stubborn insistence that we’ve just been unlucky over the 7 games worries me that he doesn’t acknowledge the material difference between the performances.

Thanks for all your work Dom. The cumulative PVA doesn’t feel like it tallies with the dominance I saw us have. Any further thoughts on this?

It’s really the limits of the model as a lot of our dangerous moments came as a result of players dribbling into the box which isn’t rewarded anywhere near as highly as passing into the box is! But yeah it’s more an indicator than anything as I mentioned that we used our PV in a more efficient way as our xG tally was higher than normal.

Good game. Now don’t give it all back by reverting to type with insipid performances against the. Albions.

As per usual with Stats, it what you want to highlight. 1) We were more balanced in attack bc of Martinelli and Saka switched to right. That allowed Bellerin more involvement. Lets just say whilst some people harp rightly on about the Martinelli-Tierney combination, two of the goals stemmed from action from our right. with Saka winning the penalty and then looping in hi scross. 2) Laca was also HEAViLY involved in winning the ball for us and distributing it. The number of times he dropped deep to nick the ball and start the counter. In that the back 4… Read more »

Might not agree 100% with all. But, spot on analysis for the most part.

How many games has Partey played?
Might not have got Aouar but he also might have been injured.
Squad disruption because of COVID restrictions on buying and selling

Yes Mr Santori we can highlight what we wish

Smith Rowe has PACE! bullish type physique too. I love it