Arsenal 4-1 Rapid Vienna: By The Visuals

Arsenal continued their 100% record in the Europa League group stages as a largely rotated side put Rapid Vienna to the sword in a dominant 4-1 victory in the first game in front of fans at the Emirates stadium since a 1-0 victory over West Ham in March.

It was another positive night in the Europa League, with Arsenal the joint second top scorers in the competition so far with only Bayer Leverkusen (17) having scored more goals than Arsenal’s 16.

Let’s take a look at the data to see if we can gain any more insight into the game. 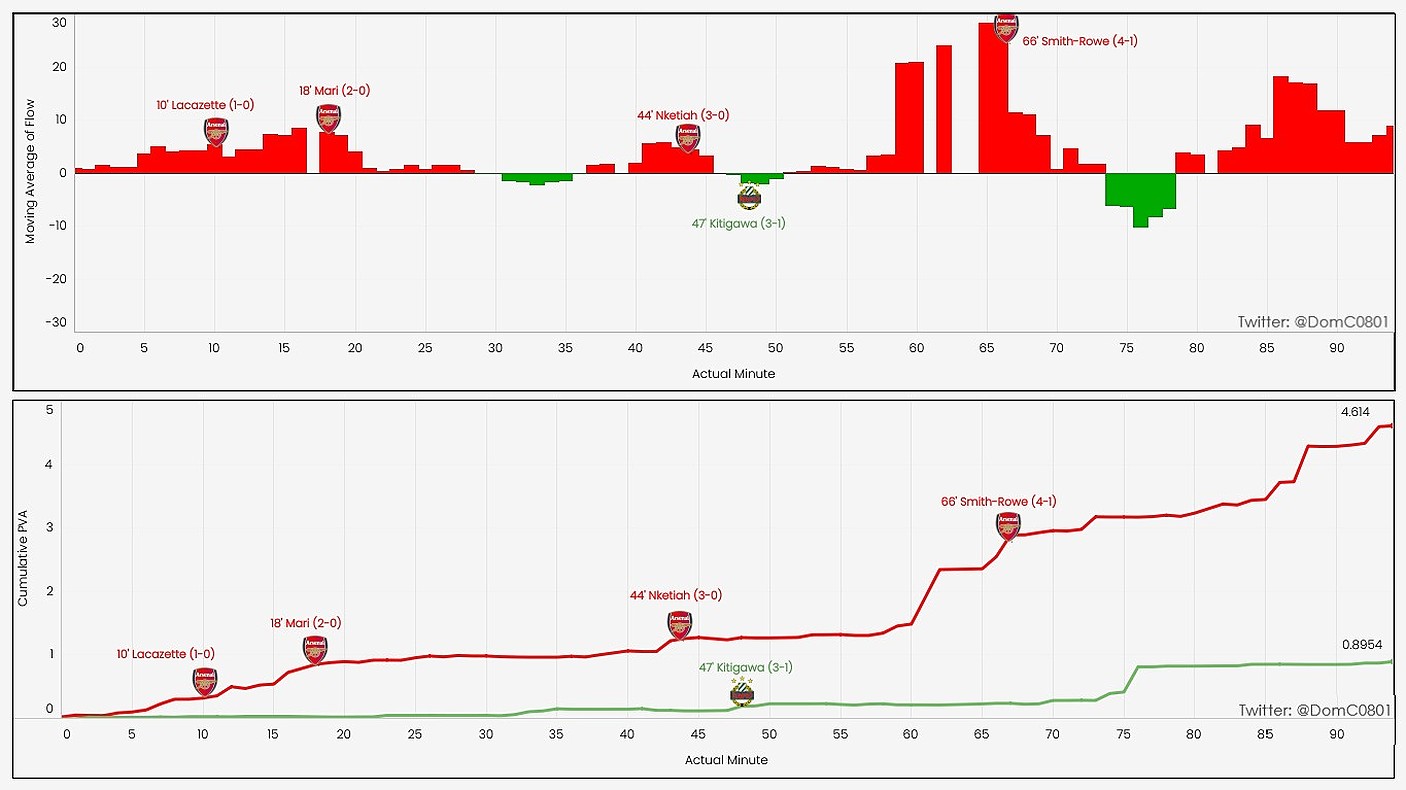 Above are the Possession Value (PV) Gameflow and the Cumulative Possession Value Added (PVA) for both teams. As we can see Arsenal completely dominated the game, with the Austrian visitors causing very few problems for the Arsenal defence apart from their goal. Arsenal created numerous threatening chances with the midfield combination of Lacazette (playing as a LCM) and Ainsley Maitland-Niles, combining well with Reiss Nelson, Eddie Nketiah and Nicolas Pepe to create space and cause problems for Rapid’s deep block.

This is a much better passing network pic.twitter.com/YNlYJWN9Lx

Above is the passing network from Thursday’s game, made by the great Scott Willis and included in his By the Numbers piece, which truly shows how connected our front 5 and full-backs were. These kinds of pass maps are incredibly encouraging, with Arsenal’s midfield and wingers often forming a ‘box’ midfield akin to what RB Leipzig do under Julien Nagelsmann.

#afc deployed a box midfield with Pepe and Nelson moving centrally to form a box with Laca and AMN. The box midfield helps create attacking rotations and opens up the wide areas for the FB's to exploit. Nelson + Pepe being closer allows them to create space with quick interplay. pic.twitter.com/28JH40cw0P

This ‘box’ midfield allows for attacking rotations to occur naturally as players can easily enter the spaces vacated by their teammates, thus dragging defenders out of their deep block and creating space in behind. This made getting into the penalty area a lot easier, with Arsenal completing 22 passes into the Penalty Area. 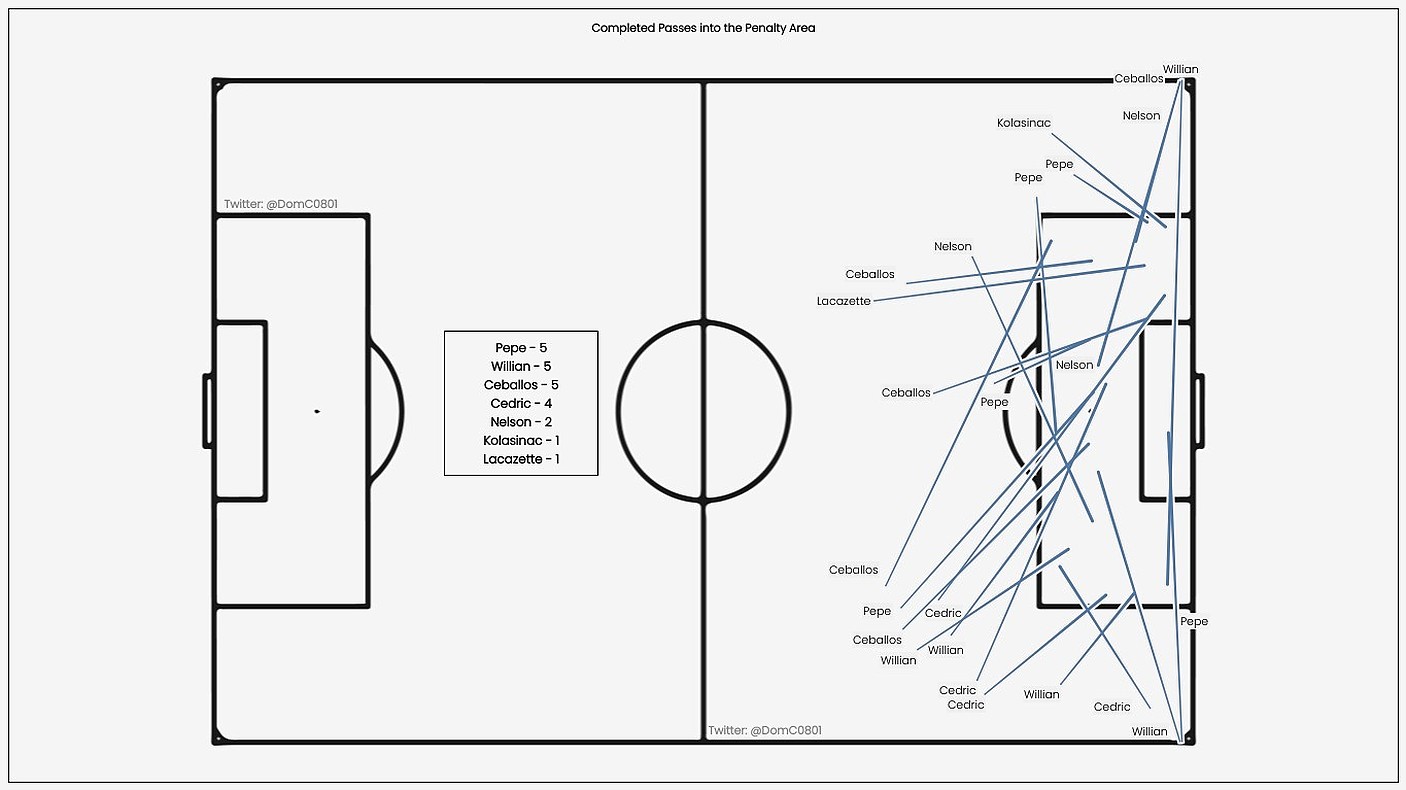 This is an encouraging sign as Arsenal’s rotational side completely dominated what is probably the second best team in the group playing in a way which could help alleviate our creativity problems in the league. 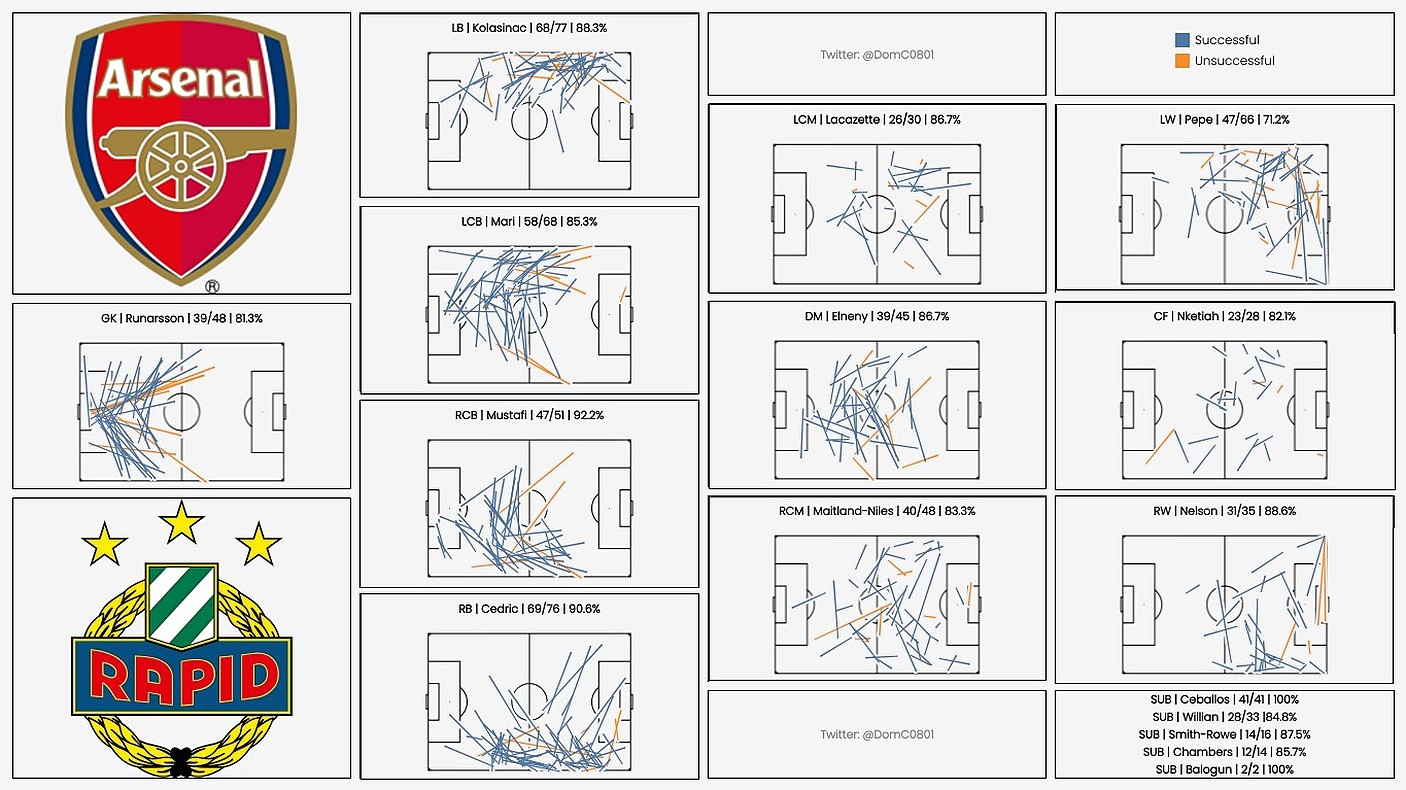 Above are the pass maps for each player in the starting XI. Arsenal used the flanks to good effect, with Nelson, Pepe, Cedric and Kolasinac combining well to create good chances down the flanks. Pablo Mari had a solid showing on his return, as the Spaniard grabbed a goal and looked assured in possession as he advanced the ball up the left wing.

Above are the Possession Value Added (PVA) percentages for each player from Thursday’s game. Nicolas Pepe was on fire creatively, with the Ivorian’s passing increasing Arsenal’s chances of scoring by a whopping 183.5%. Cedric also impressed, with his crossing from the right a constant threat throughout. Dani Ceballos made a good impact off the bench, with the Spaniard relishing the extra space Rapid afforded Arsenal in the last 30 minutes as he consistently played balls in behind. Ainsley Maitland-Niles impressed in midfield, with the England international surely putting his hand up for future inclusion if Arsenal’s midfield troubles are to continue.

It’s onto the big one this weekend, with Arsenal travelling to N17 to face top of the table Sp*rs in the North London Derby.

Previous articleBellerin: I really, really believe the results will come
Next articleJoe Montemurro urges football to get serious on head injuries

The deployment of a “box” midfield approach shows me that if nothing else, Arteta is at least trying to solve the midfield problems plaguing us right now.

Who knows if we’ll see it this weekend, or if it can be executed this well against higher quality opposition, but it’s worth a shot, that’s for damn sure. And you could do a lot worse than crib ideas like this from someone like Nagelsmann.

Daveo
Reply to  Timorous Me

It would be a little disturbing if he wasn’t trying to fix it. Potentially Laca as an AM is an answer to his own poor play as striker and to also create more for the team. Similar role to what Bergkamp played. Feels like a discussion people have had on this forum previously that never eventuated. It would relieve the pressure on Auba to hold up play and let him play off the last line of defense which is clearly where he is most dangerous. Whoever it is it is clear we need some bodies and play to run through… Read more »

People as usual getting confused by success against poor opposition versus reality. They see how we shit on a small team and think that’s got to be the solution for the league. Then they are surprise why we are still so shit and they suggest poorer quality players who look good against these poorer opponents but when thrown into the mix in league look shit. Same as usual. People like to deceive themselves. not saying there are not good take aways and lessons from the win against Rapid Wein but it needs to be framed into context with the team… Read more »

Well many of your so called superior quality players look worse than shite in the league. And yes Xhaka, whose quality you are always talking up, is one of those I refer too.

So where is the harm in trying something different? It can’t make us much worse since this is the worst start we’ve ever had.