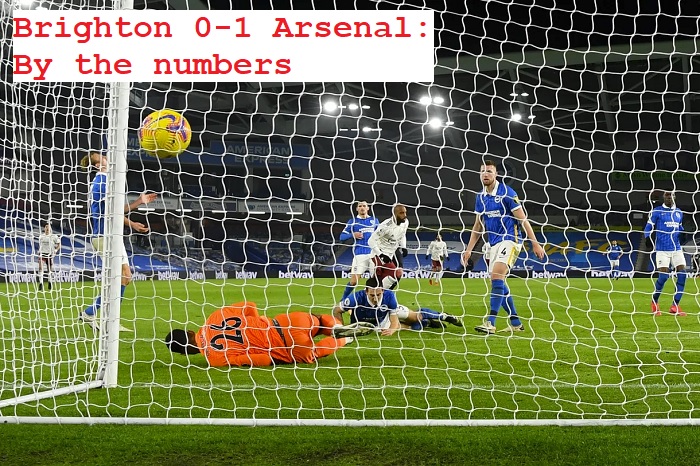 Arsenal are on a win streak!

One of the big things that I noticed during these festive period matches is that all of the teams look really leggy and sluggish. This certainly looked like a factor for Arsenal in this match, as the first 45 minutes and final 24 minutes were pretty brutal to watch. Thankfully Arsenal sandwiched that with 20 minutes of good attack that was enough to secure a very important three points.

Brighton 0-1 Arsenal: By the graphs 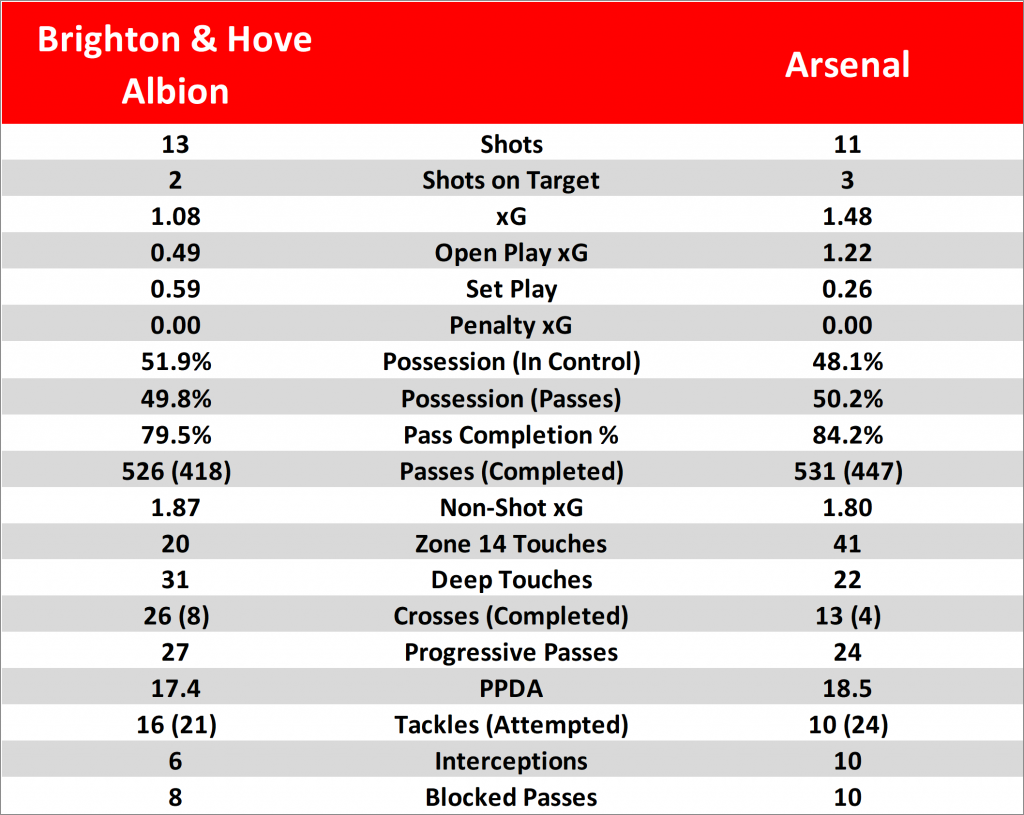 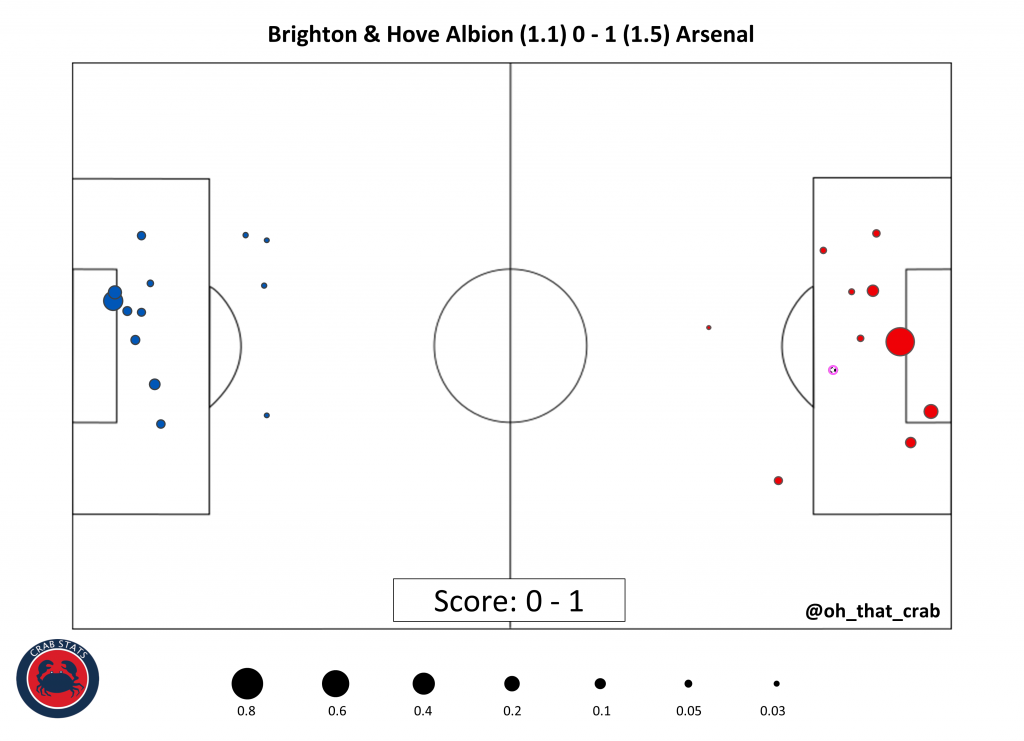 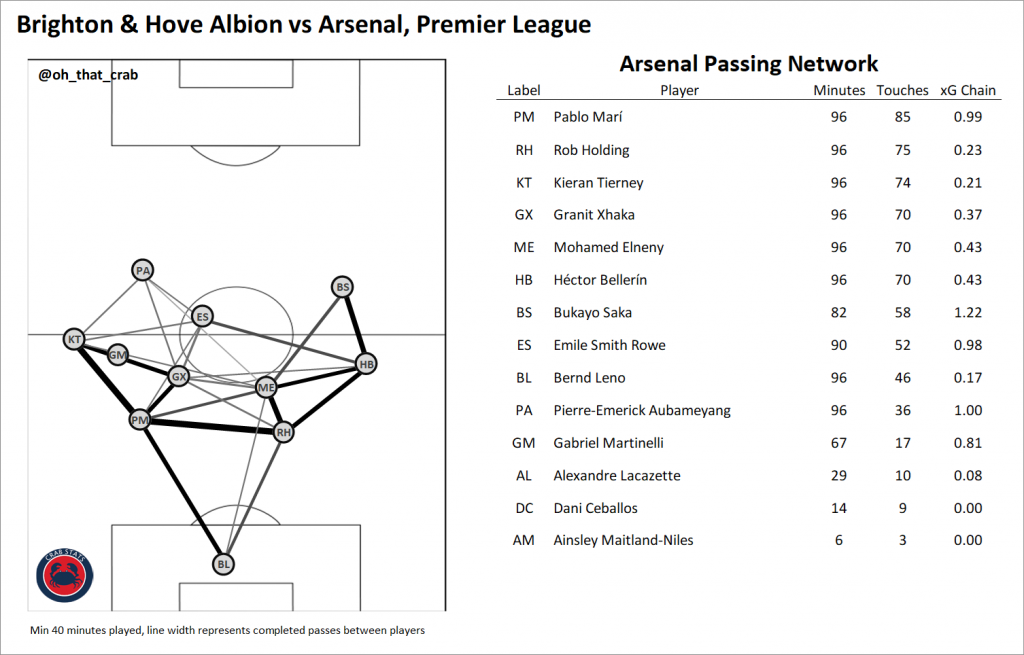 Brighton 0-1 Arsenal: By the numbers

2 – Shots for Arsenal for the other 3 quarters of the match, of which 0 were on target and the expected goals total was just 0.2.

9 – Shots for Brighton for the other 3 quarters of the match, of which 1 were on target and the expected goals total was just 0.5.

The 22 plus minutes right after half time were by far the best period of play for Arsenal in this match. They created their best chance of the night in this period (Aubameyang 50′) and their goal, but it also makes you wonder where this was in the opening 45 minutes of the match.

I do think that it was encouraging that Arsenal came out in the second half looking like a different team and were able to get a deserved goal. 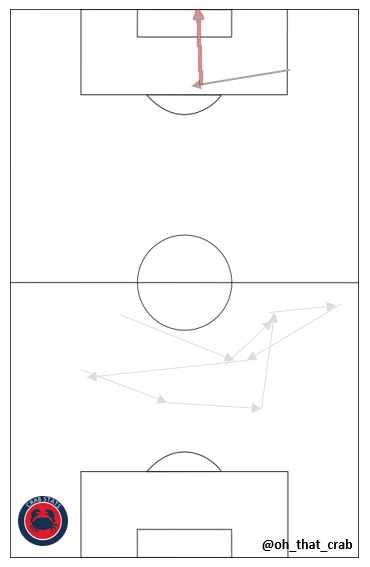 I haven’t finished putting the cleanup touches to make these graphics look as good as I would like but this is the Arsenal passing build up for their goal. It is basically circulated around the back until it gets to Saka and he carries it nearly 40 yards up field before slotting it to Lacazette, who finished the chance wonderfully. This to me also really encapsulates just how important Saka is to Arsenal’s attack, on a day when Arsenal needed someone to do a bit of individual magic he was the one that put the team on his back. This was a little backward from normal but now his stats.

It cannot be stressed enough how special Saka is. There are not many players that have the special sauce of technical and physical ability that he has and I find that it is a treat that he has come through Arsenal’s academy. I feel like I write something along the same lines about him every week but it is a joy to watch him play.

46 – Passes completed, 5th most on Arsenal

In Mikel Arteta’s system I think that Hector Bellerin has one of the hardest jobs.

He is asked to play a key role in both the build up and creative phases of play. He is often the player that tucks inside instead of whoever plays in the wide attacking position. This attacking assignment also doesn’t take away that he is also asked to shutdown an opposing forward, which means long runs back to cover on defense.

This dual role is hard for a player, especially on a team that will tend to have a bias towards the other flank, where players on the right side of Arsenal’s attack can be very isolated. In this match with the addition of Saka to his flank, it looked like Arsenal was better balanced between left and right. The additions of Saka and Smith-Rowe also took off some of the burden where Bellerin did not need to try to push up nearly as high or as central, giving him better starting spots to cover his position.

This was a good match from Bellerin and hopefully this is something that can continue.

Sources: Opta via WhoScored, StatsZone and my own database

I really love Saka but I hope we don’t become too reliant on him, he’s going to start becoming a target for opposition fouling and a 19 yo really shouldn’t be the one carrying us.

I would also like to see more of AMN. Arteta doesn’t seem to trust him but I think he has the mobility and pace that neither Xhaka or Elneny have. It must be an ‘attitude in training’ thing, as Arteta definitely seems to give more chances to Nketia and Willock, who I personally don’t think have the same potential as AMN. It’s a strange one.

Absolutely. We should protect him by giving him rest for a week or two. We had another bright star who we run to ground (Wilshere), can’t do the same to Saka.

The badge of carrying a team is based on a combination of performances, desire, skill, and leadership, age is irrelevant. We’re blessed to have Saka and he doesn’t mind the responsibility. There have been many players throughout history to begin carrying a team at his age. What Arteta needs to do to protect him is point out the rough challenges he receives game in game out in every press conference. This will at the very least make refs aware and can possibly protect him. Plenty of managers have done this before and it worked, especially with players who are called… Read more »

That’s the only numbers that count.

Possession is great but doesn’t win games, if the opposition score and you don’t. Passing side to side and back all count as possession but produce no end product. Maybe only firward passing should be counted?

Shots on or off target, only count for anything, if they end up in the back of the net.

Teams can place too much emphasis on numbers and not enough on cutting edge forward play….

jimbo
Reply to  Old but Gold

While the Bellerin numbers seem to suggest he did alright, there were times in the match where his loss of pace showed – he was out of position, completely lost his man and allowed Brighton to get easy crosses in. Thankfully Brighton were pretty poor with the final ball. It is a little scary to think what a better team could have done in those situations. The clear difference in the 20 minute spell in the second half was the players took fewer touches, passed it quicker and the midfielders turned with the ball instead of receiving the ball and… Read more »

My worry with Hector is mainly about two things: his first touch always seems to be off, mostly inviting a tackle from the opponent, and he is awful at aerial duels. Both are key attributes that he needs to work on, he was getting beat in the air by a guy who wasn’t even necessarily tall or known for his aerial prowess

I don’t think he’s lost much pace. I just think positionally he’s quite bad sometimes. Often in no man’s land.

Please re-watch the game if you have an opportunity and see if Bellerin loses his man, is slow getting back, etc. I think you will find that the exact opposite is true–it was Bellerin’s pace and awareness that allowed him to cover Brighton’s most dangerous moments.

With WBA, Palace and Newcastle up next in the league, we really need this run to continue and gain confidence for a return to harder games. Can’t afford these long periods of opposition control.

its worrying that we cant seem to dominate any game. how many times have we played well this season.
Arteta is getting away with alot at the moment due to the lack of any fans.
A full stadium would quickly get bored of his negative boring football.
Im quite glad im not going at the moment cos its really so dull to watch

We can’t dominate because our CM pairing is Xhaka and Elneny. It’s pretty simple.

well maybe if arteta hadnt got rid of ozil guendouzi and torriera from the squad wed have more options.

I think for this season, one of them alongside Partey would work just fine

Both had a decent if uninspiring game. We all want better players, but since they are the ones we have, there is no point complaining when they are doing a job.

A Different George
Reply to  Francesc

I am not a big Xhaka fan–but perhaps take a look at Adrian Clarke’s analysis of the Chelsea match on the official website to understand why Arteta (and Emery and, indeed, Wenger and Switzerland) see something more.

jimbo
Reply to  A Different George

What worries me a bit is MA’s insistence that the issue over the last 56 or so days has bas not been the performance but the results. If anything, it’s the performances that have been dreadful.

I think its a classic managerial trick to say we were unlucky in public. If he went public with what he thought about our play in early December it would have destroyed an already fragile team. As it is we are now starting to play some football (in patches) and actually win matches.

Am I reading the PPDA stats correctly, that in this game Arsenal allowed 18.5 PPDA vs. the Chelsea game where it was 12-point-something?

Seems to me that is the major difference b/t a sluggish, downright lousy performance for 3/4s of this game vs. what we saw at Chelsea. I don’t know why MA has Arsenal playing so passively, but it does not seem to be working well. Get back to pressing the opposition, especially deep in their half. Good things will happen.

Fatigue was the main reason why PPDA shot up in this game, and an eye test would have confirmed same.

Thanks, Scott. I don’t doubt that in the first half “Arsenal were pretty soundly beat by Brighton in just about every attacking statistic” except possession. But this gives the impression that Brighton actually dominated the half, and I don’t think this is true. I thought both teams looked equally poor; neither created sustained threatening play, though each had short periods of ascendancy. If either had scored, you would not have said it was against the run of play–nor that it was a deserved lead.