Brighton 0-1 Arsenal: By The Visuals

Arsenal have won 2 games in a row!

What seemed to be a dreadful December has ended on a high note as Arsenal won a Premier League match against Brighton for the first time since the Seagulls were promoted as Mikel Arteta’s side edged a tight game 1-0 at the Amex. Things are looking a little rosier as Arsenal have gone from being potentially sucked into a relegation fight to being only 6 points behind 5th placed Aston Villa which just goes to show how tight the Premier League is this season (In fact no team has won 4 games in a row so far this season!).

Let’s take a look at the data to see if we can gain any more additional insight into the game. 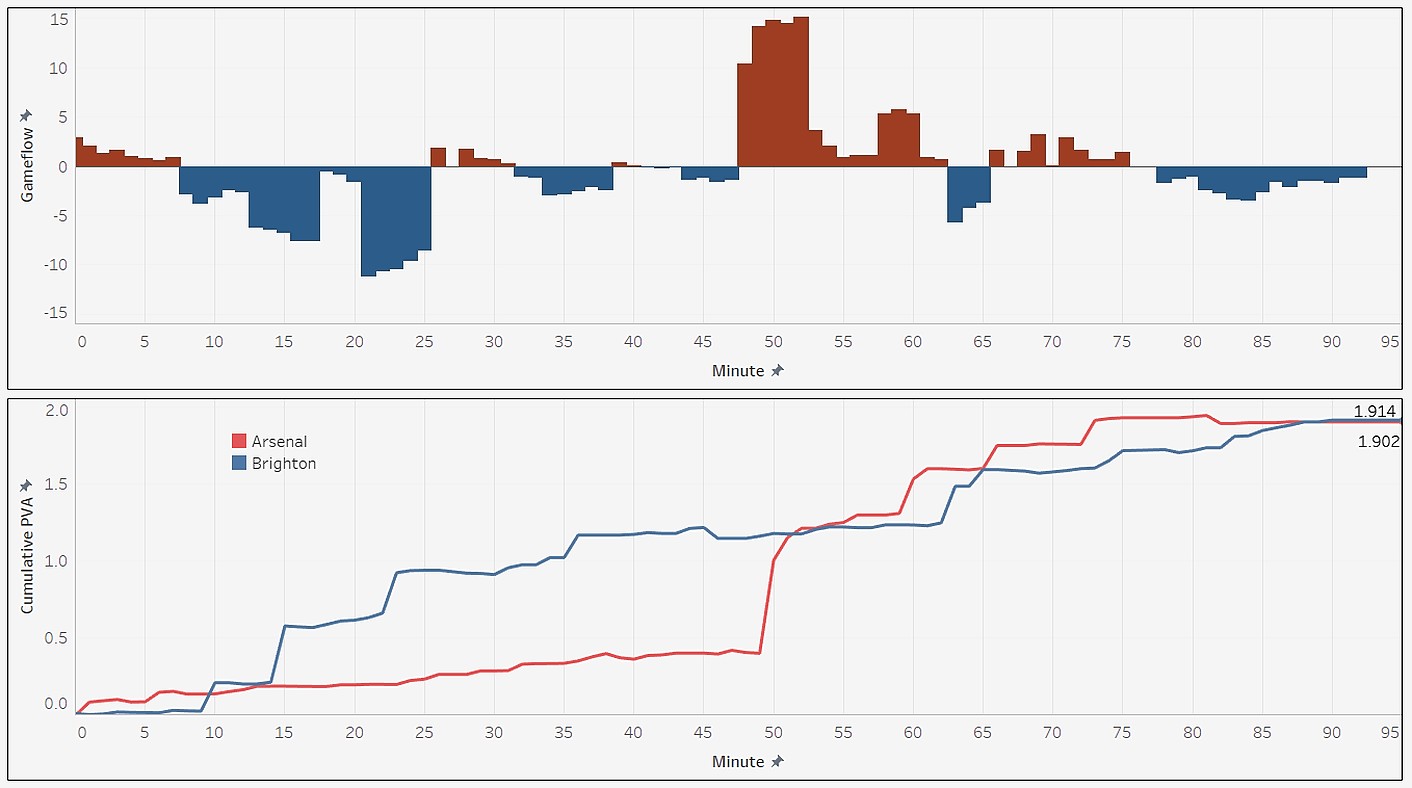 Above are the Cumulative PVA and PV Gameflow from each team from yesterday’s game. Arsenal really struggled in the first half after a relatively good first 10 minutes, with Brighton dominating all the way until half time. Mikel Arteta made a few tactical tweaks at half-time and Arsenal dominated the majority of the second half, before sitting back to see out the victory for the last 15 minutes. The final PVA values (1.914 to 1.902) show just how close the game was. 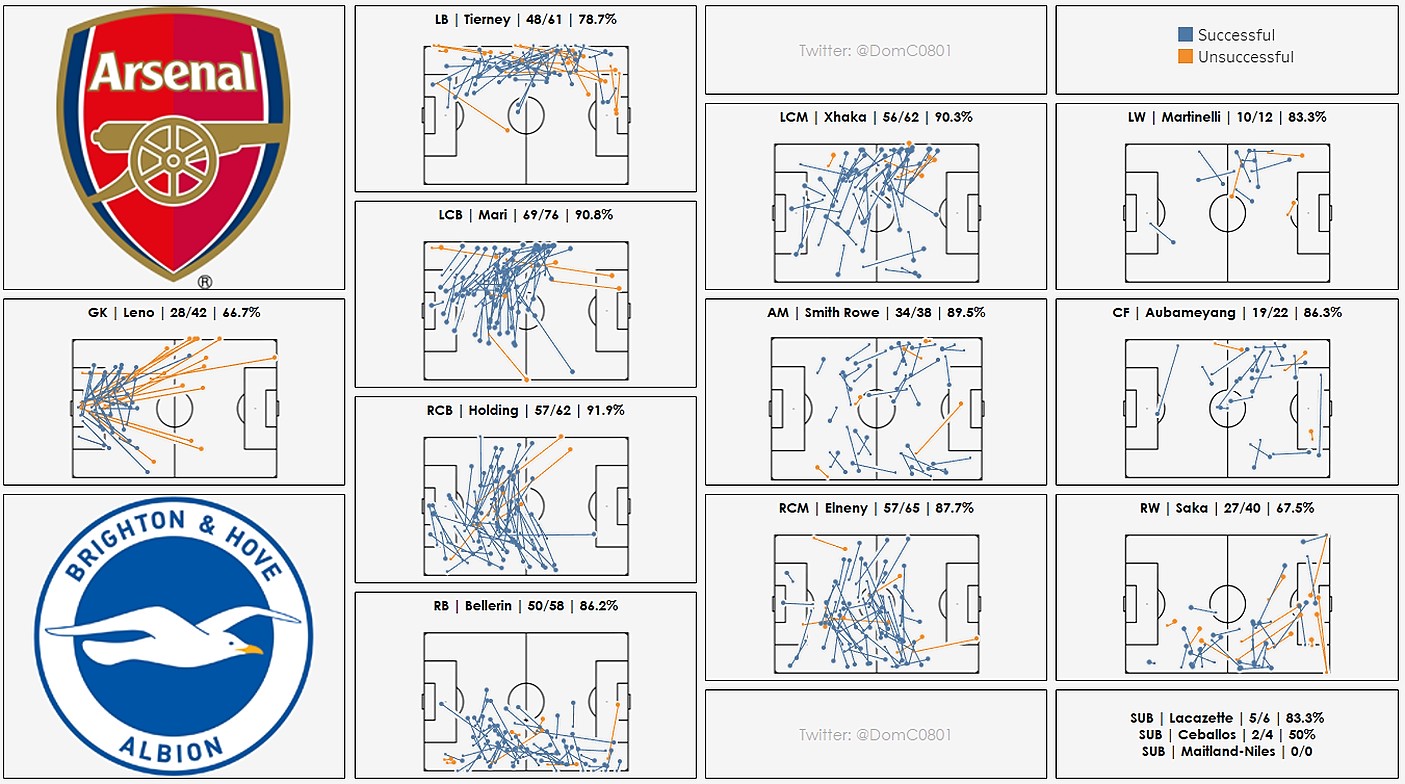 Above are the pass maps for each of the Starting XI. Arsenal managed to progress the ball well but questions may be asked about whether or not Arsenal can break teams down when we start 2 low-touch players (Aubameyang and Martinelli) in our front 4. The overlap of there skillsets seem to make them not particularly compatible and so that presents an issue for Mikel Arteta to contend with in future. Elsewhere Emile Smith Rowe continued his good week as the youngster was secure and tidy in possession as he linked play down both flanks. Kieran Tierney was again an active presence in the final third, with the Scot seemingly enjoying the freedom of being the LB in a back 4 as opposed to the LCB in a back 3. 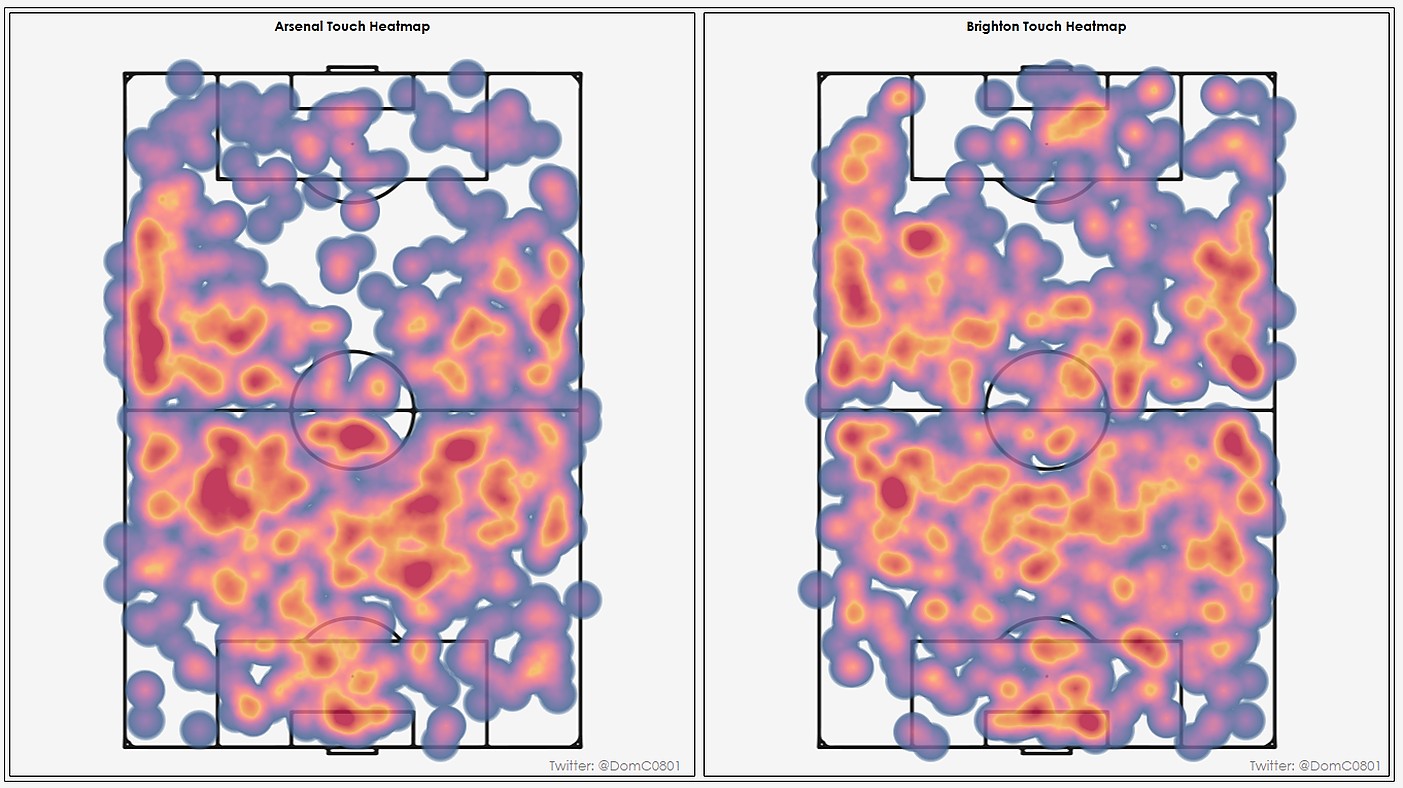 The above shows the touch heatmaps for each side. Arsenal had possession in their own half a lot, with Brighton seemingly reluctant to press Arsenal much as they sat in a deep block for much of the game. Arsenal’s best source of attacking touches again came up the left hand-side with very little central space to work with in between Brighton’s congested midfield. Brighton meanwhile looked to attack the spaces in between the Arsenal midfield and defence as well as attacking down each flank. 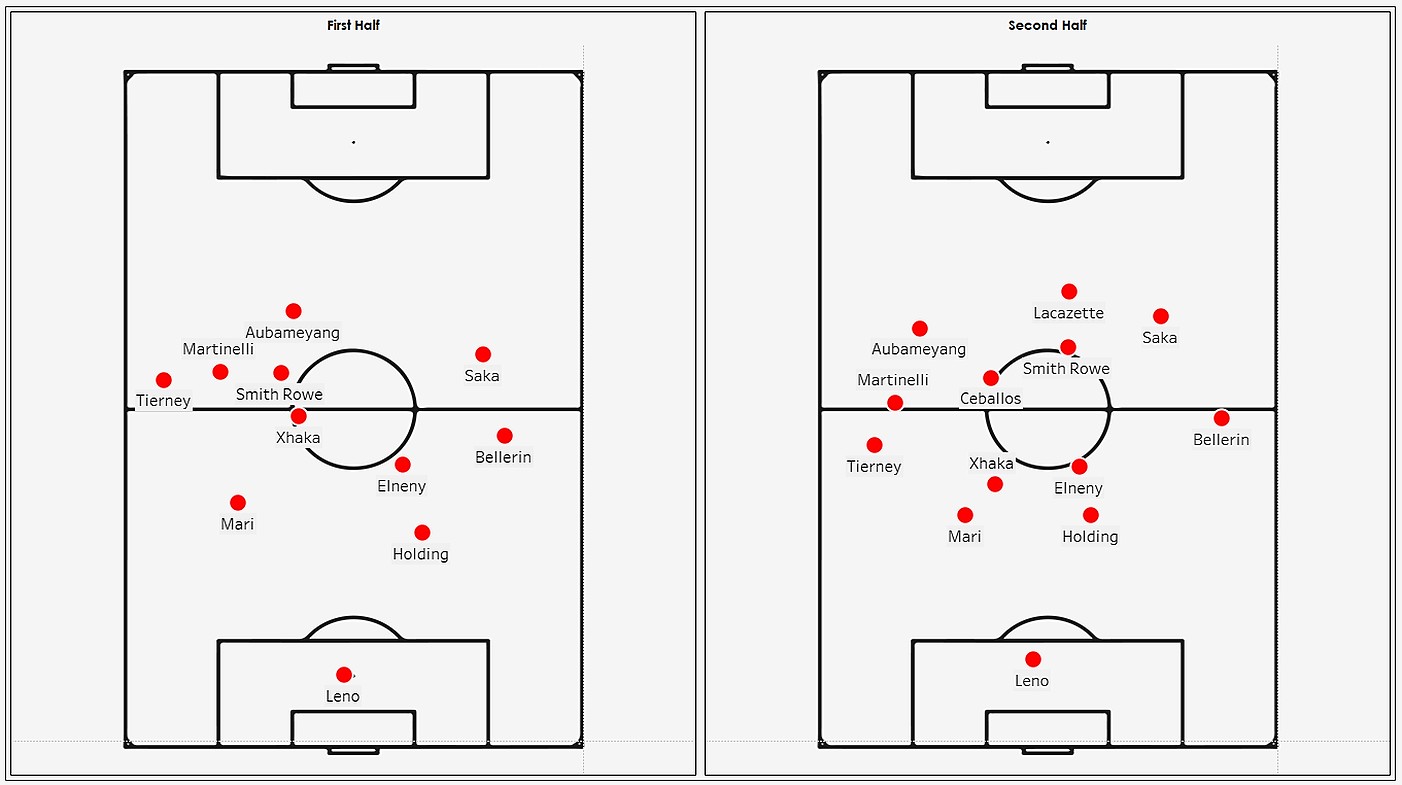 As I mentioned earlier, there was a clear tactical tweak in the second half, with Emile Smith Rowe spending much more time in the right half-space as Arsenal looked to balance out their left-sided bias from the first half. Smith Rowe’s presence on the right side allowed Bukayo Saka to push further up the pitch and allowed him to isolate Dan Burn which was a matchup that ended up deciding the game. 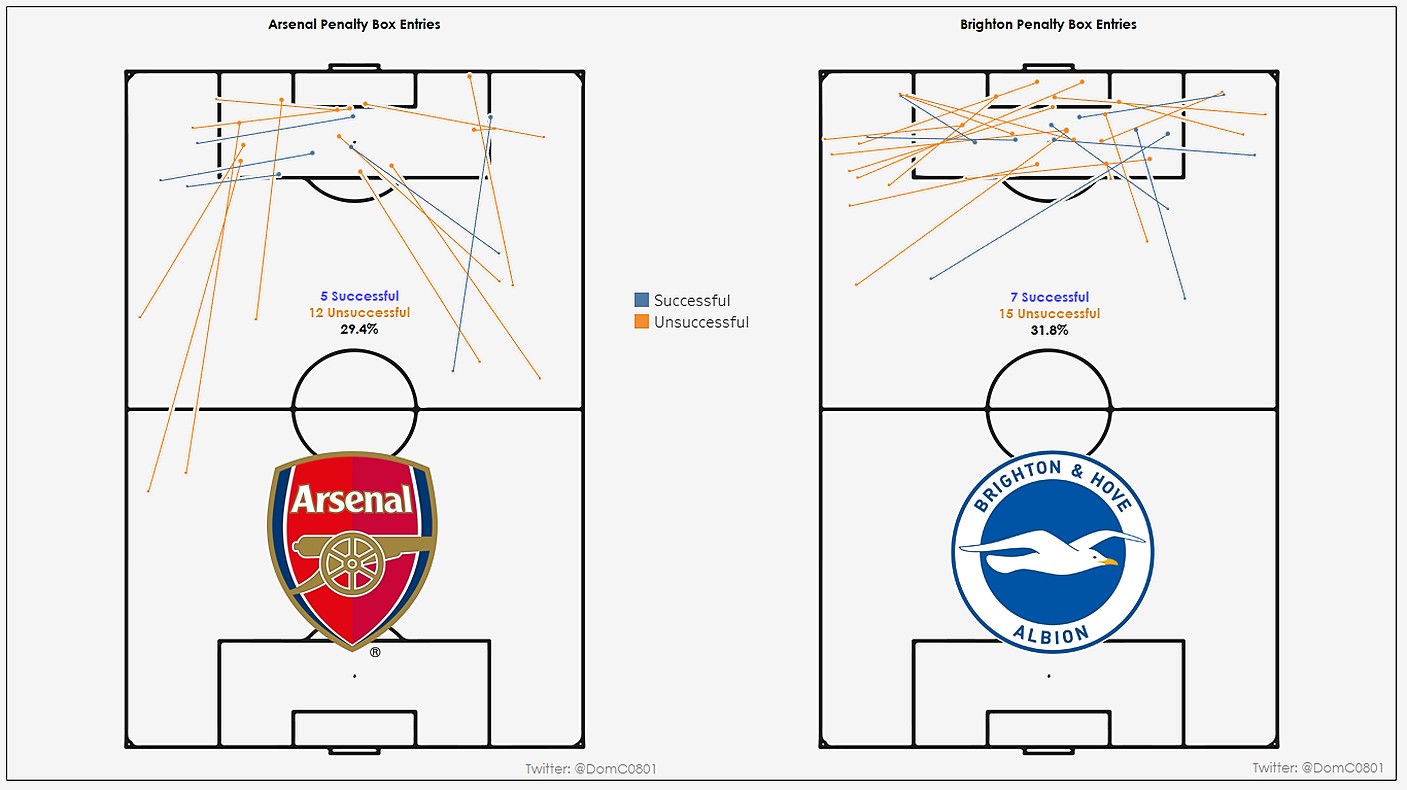 Above are the penalty box entries from both teams. Arsenal attempted much more passes in behind the Brighton defence than they normally do, a possible sign of the direct approach that the introduction of a youthful trio behind the striker has granted Arsenal. This directness has also freed up Granit Xhaka who has enjoyed more space in the last 2 games than he has had for months. Brighton meanwhile were forced to attempt to cross the ball into the Arsenal box, which leads me to my next point. 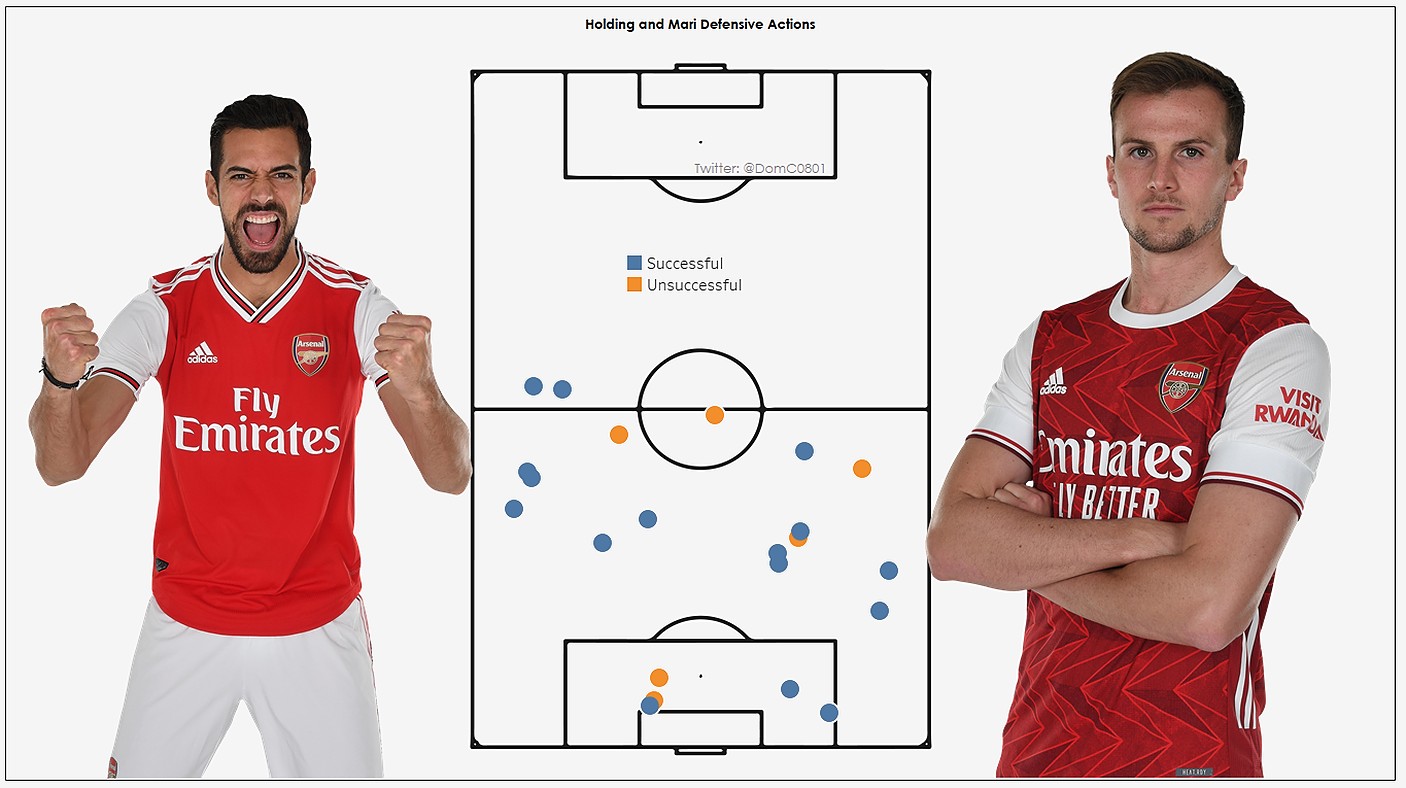 Pablo Mari and Rob Holding both had solid performances as Arsenal weathered a late storm to escape with a victory. While there are definitely question marks over whether either player is of the level required (I think Holding is much closer to it than Mari), both have performed honourably in what has been one of the most important weeks in Arsenal’s recent history.

That’s all from me for today, next up is a trip to the Hawthorns to face what will probably be the deepest of deep blocks as Arsenal come up against a ‘Big’ Sam Allardyce team for the first time since a 5-1 win over his Everton side at the Emirates in February 2018.

The visuals show a great half-time speech by Arteta, after a rubbish first half!

A is for Arsenal

Thanks, Dom. Interesting thought about Martinelli and Auba not necessarily being compatible. Probably even more pertinent against a low block when we could do with effective hold up play. Odd to see Saka’s pass completion rate being so low and yet it felt like he was comfortably our best player. To that end, is it possible to sometimes visualise progressive (or at least forward) passes instead of un/successful? That may make it easier to see whether Elneny’s sea of blue is actually helpful. And final request for newbies like me… Can you add direction of attack arrows on the pitch… Read more »

Big change for me was the switch in focus of attack from left to right in the 2nd half. For so long we have preferred the left for possession and then occasional seeing right to have a quick sniff before going back to the left and tapping it around. First half was exactly this again, boring, toothless and slow. It heavily involves xhaka who just isn’t effective against set defenses when he can be shown onto his right foot and counter attacked. The 2ns half shift in focus of attacks to the right channel, with ESR and Saka playing much… Read more »

Good point, but I wonder whether the shift was intended to focus our attack on their left side due to some weakness Arteta noticed, or whether it was simply to get Saka more on the ball. I suspect the second.

The left-sided preference this season is mostly do, I think, to Aubameyang’s presence there and Willian on the right.

Very poor passes from Elneny and Holding yesterday almost undid us. Suicide balls straight to opponents with gaps near our box.

Not reflected in your visuals.

AND had it been a better team we would have been punished. Bearing in mind fine margin of win.

So.
Maybe arteta isn’t as clueless as people suggest.. Mind I was cursing his name a few weeks ago but can’t say I was arteta out like many. Just dno how Wilian got his dick pics

I really appreciate this analysis. I’m not sure if enough attention is being paid to ESR’s repositioning in the second half. The tactical adjustment gave much needed balance, helped Bellerin, and brought Saka into the game more. More credit should be given to Arteta, ESR, Saka, Bellerin ie the right side for Arsenal’s second half surge. Instead, I’m reading (outside of Arseblog) about “change of mentality, desire, etc etc” and other abstract x-factors that are being credited for the change of game state and win. Regardless, here’s to 2021 and hope in newfound balance.