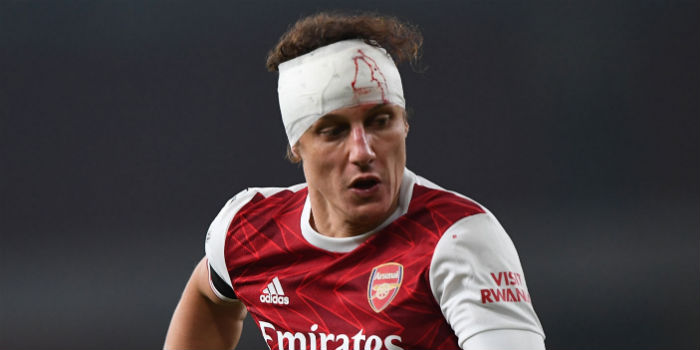 Arsenal have ruled David Luiz out of Thursday’s Europa League clash with Rapid Vienna due to the cut sustained in Sunday’s sickening clash of heads with Wolves striker Raul Jimenez.

While the Brazilian was deemed fit enough to continue playing, albeit, with a heavily bandaged head, the Mexican was immediately rushed to the hospital and continues to recover from a fractured skull that looks set to sideline him for some time.

The decision to allow Luiz to play through until half time – at which point he was substituted due to discomfort from the cut – has sparked a big debate about football’s treatment of head injuries and the need for concussion substitutes.

Arsenal have been keen to point out that the medical team followed the necessary protocols in assessing Luiz and confirmed that centre-back did not lose consciousness at the time and has shown no signs of concussion in the 48 hours since.

In a statement released this evening, the Gunners also said they are offering support to the 33-year-old who, understandably, has been left shaken up by the episode.

Arsenal’s statement: “Since Sunday, we have received many messages not just from Arsenal fans, but football fans all around the world who have been asking after David. As everyone saw soon after the incident, it is a testament to David that his paramount concern was for the welfare of Raul Jimenez after this accident.

“Together with David, our thoughts and best wishes continue to be with Raul Jimenez and his family, and we hope Raul has a strong recovery. This accident has also been traumatic for David and the club will be giving him all the support he needs during this time.

“Immediately after the accident on Sunday, protocols were completed with David, who thankfully maintained consciousness at all times. Stitches were applied to a cut on David’s forehead pitchside, and a bandage was secured on his head to protect the wound.

“With David showing no signs of concussion, the decision was made for him to continue playing with close monitoring. At half time David was further assessed and it was decided that due to the bleeding and discomfort he was experiencing from the deep cut to his head, that he would be substituted.

“David was visited at home by our club doctor on Monday during the scheduled day off and reported to our training centre on Tuesday. Close care of David’s cut and general monitoring of his wellbeing will continue in the coming days and David continues to be in good health.

“The cut to David’s head will take some days to heal and therefore he will not be available for Thursday’s match. We will continue to closely support and monitor David’s progress.”

Still can’t believe he wasn’t taken off straight after the incident…?

Possibly in sadder news, Luiz most likely wasn’t taken off because he is a very important part of our attacking threat. No one else can make those passes he whips over to the wings.

Get well soon David. I don’t always love you as a player, but I really think you’re a great person. At least he gets to spend a bit more time with his newborn now.

The Arsenal
Reply to  Johnny 4 Hats

Even sadder this is probably right.

Well, seems like Xhaka used to be able to, but either he can’t any longer or he’s been told not to. Either way, that was one of the things he was useful for. He and Luiz are about the same in that regard. Good leaders, but beyond that and long passes, we’re better off with others in there.

A P
Reply to  Russ

I would want to be substituted if I had to be stitched.

The protocols and our staff both lacked common sense in that situation.

And I hope David has received regular brain scans after that farce of not manning up and taking him off directly.

Hardly a surprise given the nature of his injury. Hopefully, the EL will provide some distraction from the torrid time we’re having in the PL. If only our results in the latter were anywhere near as good as they’ve been in the former. Still, the relatively poor quality of the European opposition may boost the confidence of the team if they can get a good result.

Not even in the scriptures is the name of David used this much. Luiz is a nice and caring man I hope he doesn’t get targeted for this, I’ve read som horrible stuff already and nobody needs that .

Hope for a quick and full recovery of both men especially Jimenez as his injuries are bad and could lead to further complications.

For those wondering about the concussion procedures and why Luiz didn’t stay of the field, I’ve found a decent explanation:

The doctor in your link is right that the doctors are better placed to assess if a player is likely concussed. Despite what some people assumed at the time, it now seems David wasn’t concussed.

But I still think head injury subs should be brought in. He admits in your link that there’s a grey area and doctors can’t be absolutely sure on the pitch, so subs will help encourage teams to be more cautious.

Definitely agree on head injury subs, rugby has had them for ages. Not sure why football has been left behind again!

Better sfae than sorry, and frankly more important he is fit for weekend critical game.

This Rapid Wein game is almost a throwaway. Frankly the quality of opponents we face in europa group stage is so poor that many fans get a misguided sense of superiority from it.

I expect Arteta will play a second string and save up as many of the more important starters for the derby.

Drop a forward and bring in ESR.

Keen to see if Chambers or Mari get feature… not sure if they are registered but both I presume back in training. Still perplex how we can spend 27m on Saliba and he still isn’t playing. As mention last summer, he had barely 19 games feature with St Etienne and just about every fan then decided he was the dog’s bollocks. Jury still out on him. Could be good, maybe not as many prefer to fantasize. But he will need to feature and I can’t see why we can’t have him available to play him to get a better sense… Read more »

Due to the cut? Not the clear and obvious concussion? Can we please see the credentials on our medical staff?

Arsenal have been losing games because they have become too
predictable like in Wenger,s time. Its pass and pass and plenty of possession.
How did Fulham beat high flying Foxes who had more possession?
This is a problem Arteta must solve.
On paper ,Spurs are favourites to win . I am going against conventional
wisdom and go for Arsenal . The y have been undefeated a long time.
Its about time the gunners get firing again.

Is anyone surprised? Can finish the half but can’t play the next game in a few days time….🤦🏽‍♂️ludicrous

Shouldn’t he have saved the head bandage for when we’re wearing the second kit?

So not Ok to play the next game but completely ok to play bandaged after the incident. We very much played with 10 men then. WTF