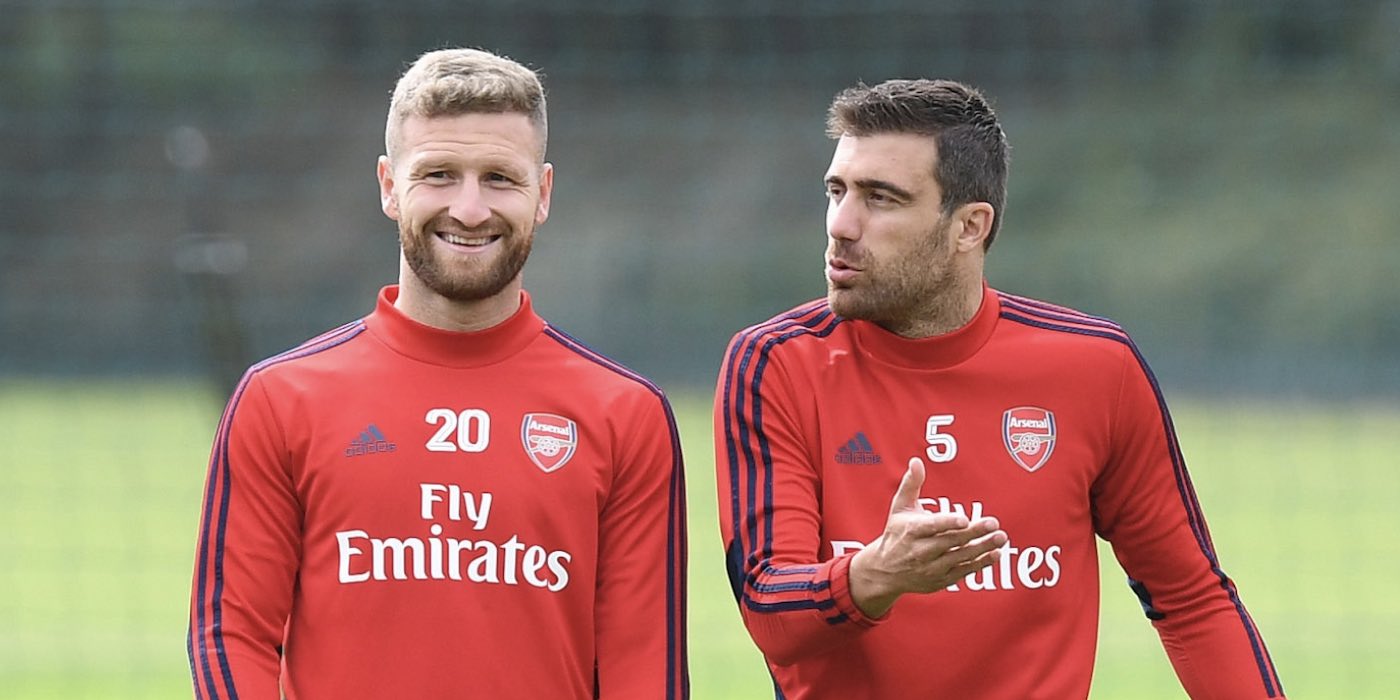 Shkodran Mustafi’s agent appears to have held talks with Barcelona about a possible move to the Spanish giants.

The German centre-back is out of contract at the end of June and is thought to have turned down a new deal at the Emirates.

The 28-year-old is free to sign a lucrative pre-contract agreement with foreign clubs in January although Arsenal, eager to make room in the squad for new faces, would most likely sanction an exit when the transfer window opens in 10 days time.

After taking to Instagram to post a picture outside the Nou Camp, representative Emre Ozturk was forced to deny suggestions that another client, 17-year-old Rapid Vienna forward Yusuf Demir, was a target for Barcelona.

Quizzed by Austrian site Spox.com, he let slip that it was actually Mustafi that was the subject of a meeting.

His response, according to Sport Witness: “I’m not in Barcelona because of Yusuf Demir, but because of Shkodran Mustafi from Arsenal, whom we also represent.”

On the surface, it looks pretty fanciful. But then you remember that Barcelona are in a terrible state right now – takes one to know one 😉 – and have a history of left field Arsenal purchases.

I’m laughing on multiple levels, the comedy of the idea the once might Barcelona want Mustafi and in complete despair that we’ve offered him a new contract

I heard he will be taking over pique. rumours have it that xhaka is also taking over busquet, and willian might take over messi.

Yeah we can do a swap

That’s one hell of a Christmas present from Barca for us Arsenal fan’s!!

Just when you thought 2020 couldn’t get any weirder

B Jack
Reply to  John C

Was going to say the exact same thing 😂

We’ll even throw in Willian for free.

Man, this is just the best story ever.
So long, farewell, aufwiedersehn, adios.
Please Lord, make it so

And then watch him become Tony Adams reincarnate.

I heard there’s an opening in the Barca Janitor’s office. Be a good move for him.

Ps. I could have used a sweeper pun there but you get the drift…

Are they fucking cra…….crafty? Crafty in the obviously intelligent scouting of our defense. Wow, please do not try to pilfer the genius that is Mustafi. We need him so desperately. Oh shucks, what can we do?

His agent is a fucking wizard.

From Messi to Mustafi…

Laughing my Fabreg-ass off at this

This is for corrupting Cesc, you mugs. Suck it up

2020 with another last minute twist

We should ask for Messi plus £50m. That’ll give us some room to negotiate.

Moves to Barcelona, becomes the best defender to ever play the game 😆

His Agent should be knighted. Make a statue outside Emirates if his agent gets him out in January.

I second: statue for that agent if it happens.

Obviously there for the stadium tour then..

It’s going to be great watching Mustafi lift the Champions League the same weekend we lose the Championship play-off final to Stoke.

They are almost as bad as us at signing players haha.

Barca loves taking our thrash out 😄😄😄😄

They haven’t been that bad, have they?
Petit, Hleb, song. Good players for us just didn’t work out for them

Van Bronkhorst another one.

The agent might just have gone to the Nou Camp for a bit of sightseeing and is actually discussing a move with Espanyol.

The world has gone mad!!!

We already have sideshow Bob!

I’d take Homer over most of our players

0/10 for missing the open goal with Inanimate Carbon rod

I’ll be happy to pay his flight and room accommodation if it see’s the back of him for good.

I will drive him to the airport

Better the Devil You Know
Reply to  Piesporterfooty

I’ll wake him up

I’ll make him coffee, pack his bags, do the dishes, walk the dog, whatever, just go….

…about one of his other players.

Maybe Barcelona B or Barfelona, another club in 4th league in Spain so it’s misspelled.

Talking about what, I wonder? How much better the weather is there. That said, if we are in truly in a parallel universe now then this is clearly the beginning of a plot to destroy Barca from within. Real Madrid, we’re looking at you…

They are a banter club as we are these days, but it should be too much. Right? RIGHT? :))

Anyways, if there is any truth there they should fire their scouts as well.

No they shouldn’t. They’re doing a great job! They should also sign Willian, Kolasinac and Xhaka.

Runar’s son could also challenge Ter Stegen for that no 1 spot and Luiz has a few good years under his belt left.

I’m happy to drive him to the airport…any airport.

But seriously, Barcelona is probably attracted by his experience playing for a team in free fall.

Xhaka to real then, and one last middle finger to the fans from him via social networks!

I thought this is a serious site, then I see this article… Also, he turned us down? Whoever offered him a new contract should be banned from work in football for life.

Mustafi must have a serious agent

Can we throw in a Willian for free?

This is the most fitting picture ever on this blog hahaha

Stop the world. I’m getting off.

Crazy right? The code is broken, some spoiled kid close to whoever created this world got playful…

I can’t believe we even offered him a new deal. I think 5 million would represent a fair deal….like if we offered Barca 5 million to take him.

From close sources! Everything is apparently agreed, the only thing left on the agenda is the length of the contract. They want 7 years, but Mustafi is looking for something more short-term as he’s eyeing the Real deal in a couple of years.

Can we swap him in Jan for Dembele?

HAHAHAHA…. wait, we offered him a new deal?

Please include Xhaka too… And willian. Ohh take Runarsson too. Pretty sure Marc Stegen needs a competitor.

I would give him away free to our rivals- city.. liverpool.. man u… spuds.. leicester.. chelsea.. you know.. so that he can at least be on their bench. It’s like planting a time bomb there.
Oh wait. Our rivals this year ars different. Can we put them in those clubs?

out of contract at the end of June and is thought to have turned down a new deal at the Emirates.

I worry his agent is flirting with Barca to secure the £250k a week contract that Mustafi deserves.

At last, some positive news about Arsenal.