Arsenal 2-0 Newcastle (AET): By The Visuals

Arsenal escaped a potential cup upset as a rotated side ran out 2-0 winners after Extra-Time against Newcastle United. Mikel Arteta will have been disappointed that he needed the help of his now first-teamers Smith Rowe, Saka, Lacazette and Xhaka as I’m sure the Arsenal manager will have been hopeful of giving each the game off after an action-packed festive period of games. The introduction of the 4 subs proved pivotal, with Smith Rowe, Saka and Lacazette linking up for the first goal and Granit Xhaka playing a large role in the second goal, and Arteta will be happy to see his substitutes helped his side avoid penalties. Arteta was also vocally appreciative of Bernd Leno’s performance, as the German shot-stopper made a brilliant save in added time to stop Andy Carroll sending Newcastle through to the 4th Round.

At the end of the day, Arteta will be happy to see his side progress into the next round (with the draw on Monday) and he will be hoping for a more favourable draw this time around to help alleviate what will be a very condensed schedule in the next few months.

Let’s take a look at the data to see if we can gain any more insight. 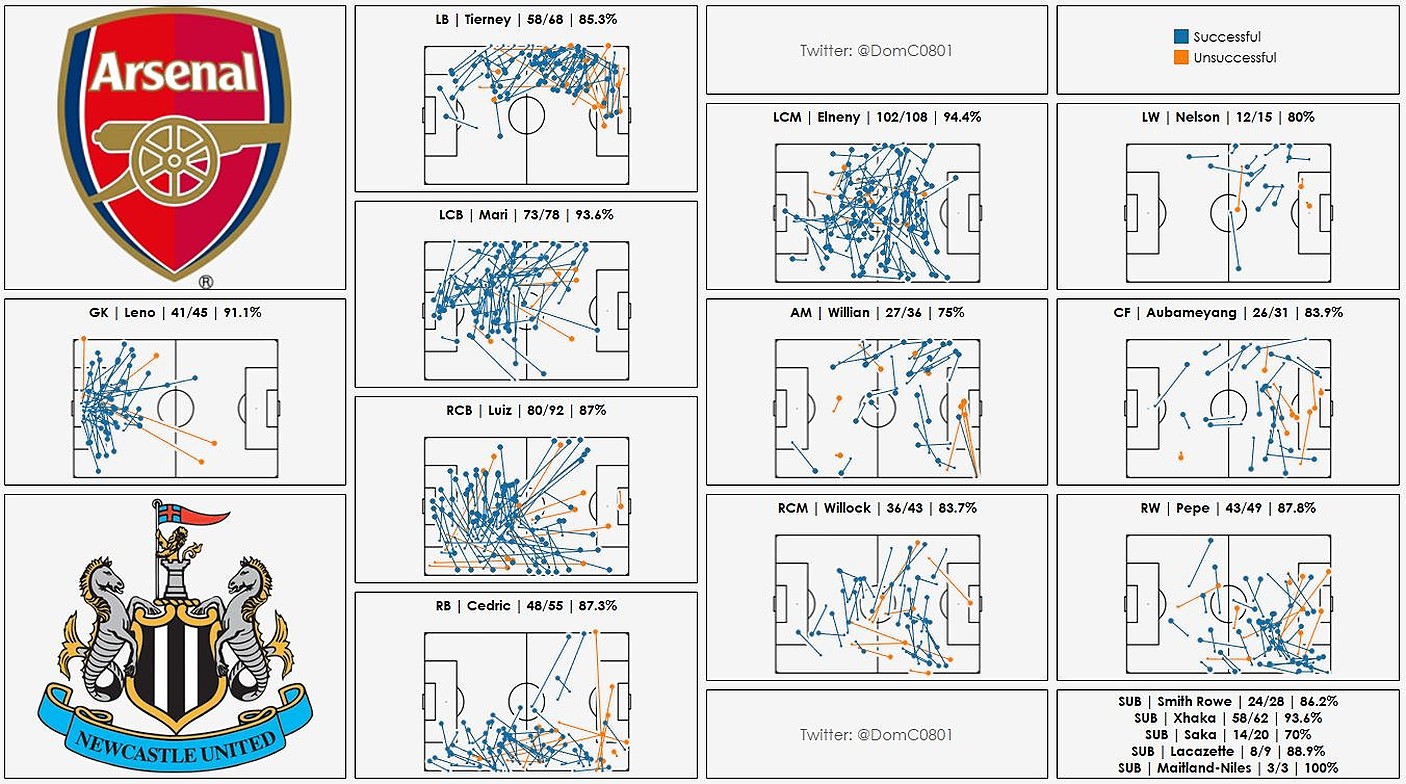 Above are the pass maps for each of the Starting XI and the stats of the substitutes. Arsenal dominated the ball in central areas as Newcastle sat back and attempted to soak up pressure. This put a lof of the creative pressure onto the 3 players behind Aubameyang (Nelson, Willian, Pepe) as well as Joe Willock. Arsenal’s dependency on Pepe in particular to create led to Arsenal having a big right-sided bias in the early stages as shown below. 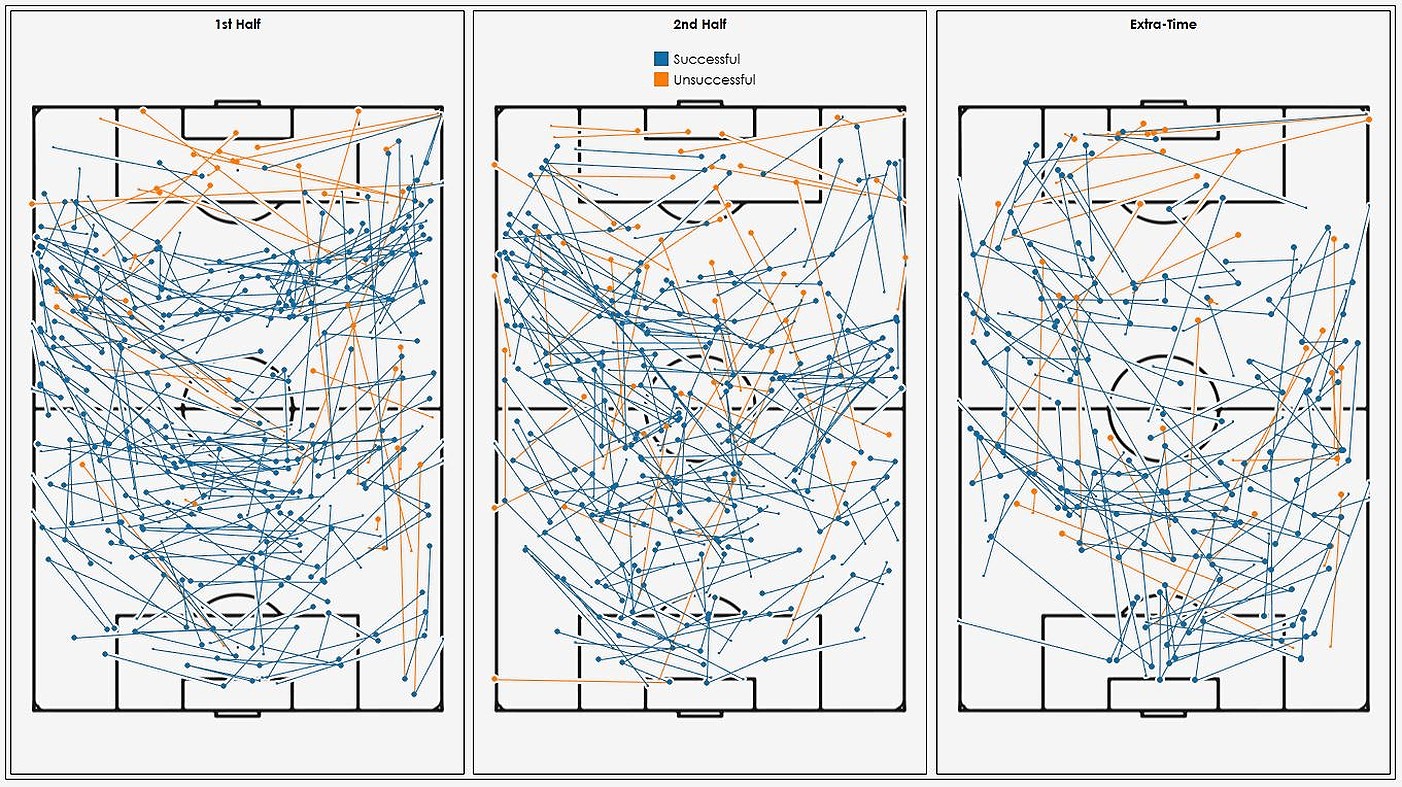 It is only when Arsenal got Kieran Tierney more into the game that they started to threaten the Newcastle goal more as the balance in our attack allowed us to threaten Newcastle from multiple angles, with Tierney in particular providing threatening balls at every opportunity.

Kieran Tierney created six chances in the match against Newcastle with one assist.

On a night in which Mikel Arteta gave chances to players on the fringes of the squad, he will be relatively disappointed with the performances of some of those who were given a chance. Willian was given an opportunity to play in the ‘Number 10’ role as Emile Smith Rowe was given a rest, but the Brazilian’s poor performance was made look even worse by the performance of his 20 year-old replacement and as Clive from the Arsenal Vision Podcast put it; 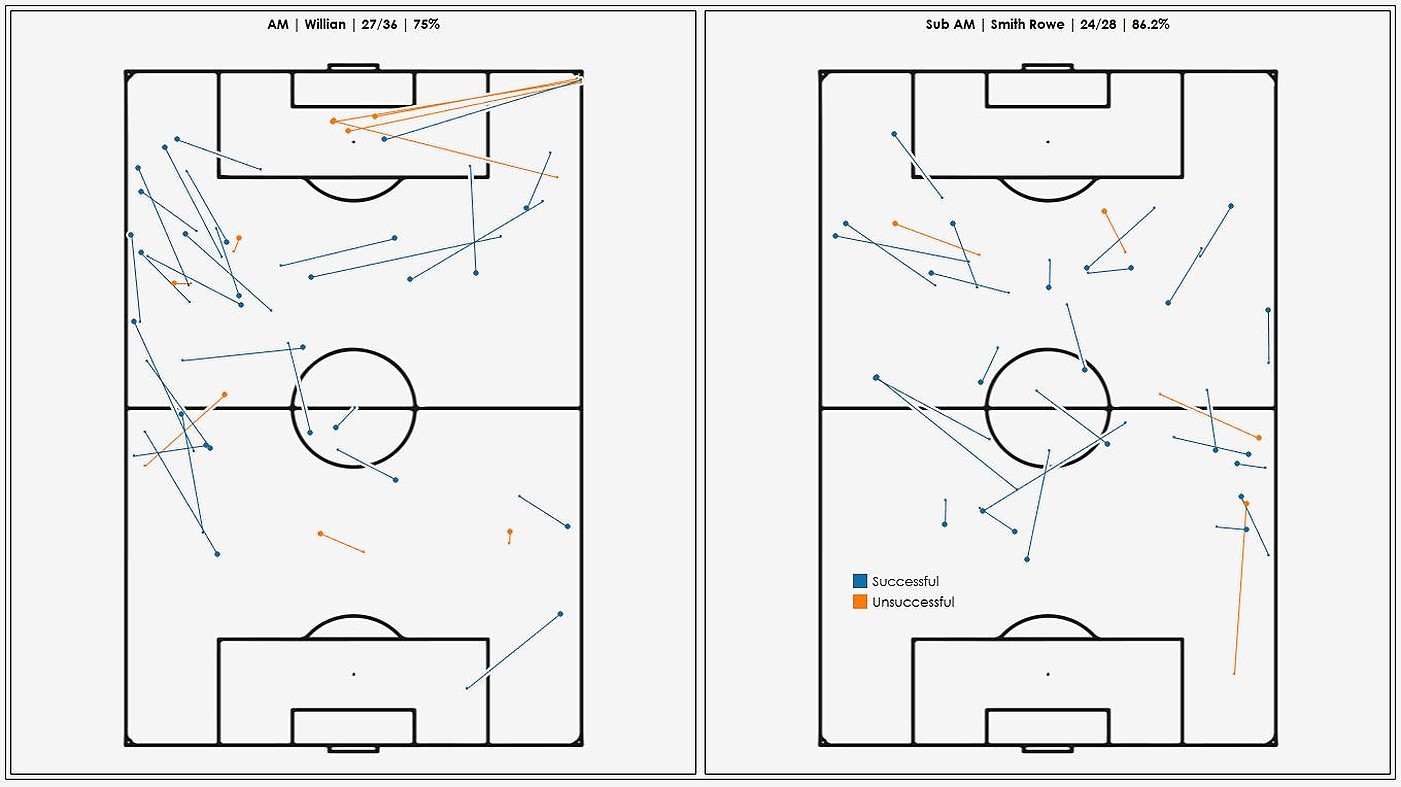 Smith Rowe managed to connect the play much more and the speed of play between the two is easy for anyone to see. With every passing game the 3 year contract we handed the former Chelsea man looks more and more worrying, and Mikel Arteta’s comments after the game aren’t going to fill anyone with enthusiasm about the possibility of another option coming in in that position.

Willian was not the only player given an opportunity who may feel like they could have done more to give themselves the chance of further opportunities. Reiss Nelson, Joe Willock and Nicolas Pepe will have considered Saturday night to be a good chance to work themselves into contention with a packed fixture list in the coming months, but there performances were mixed at best. 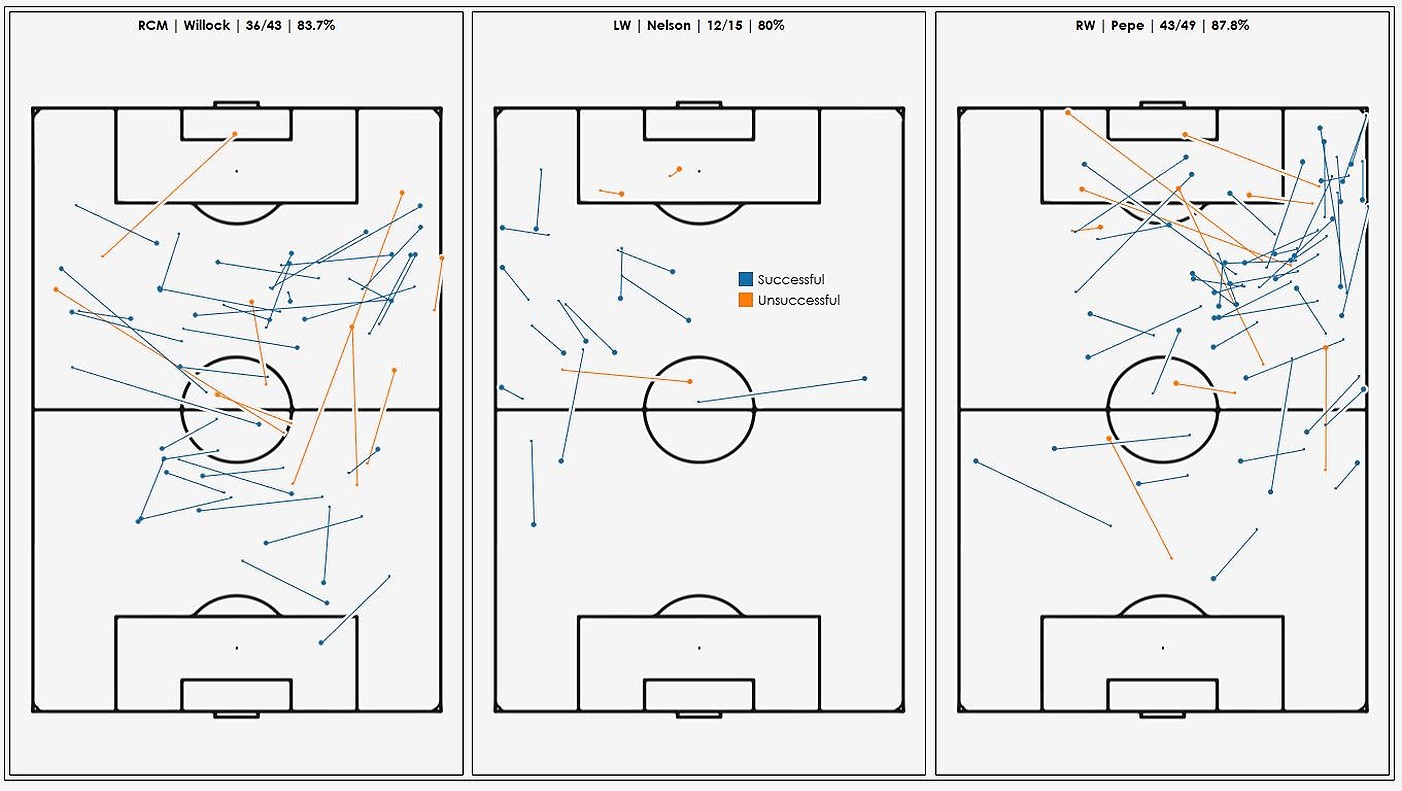 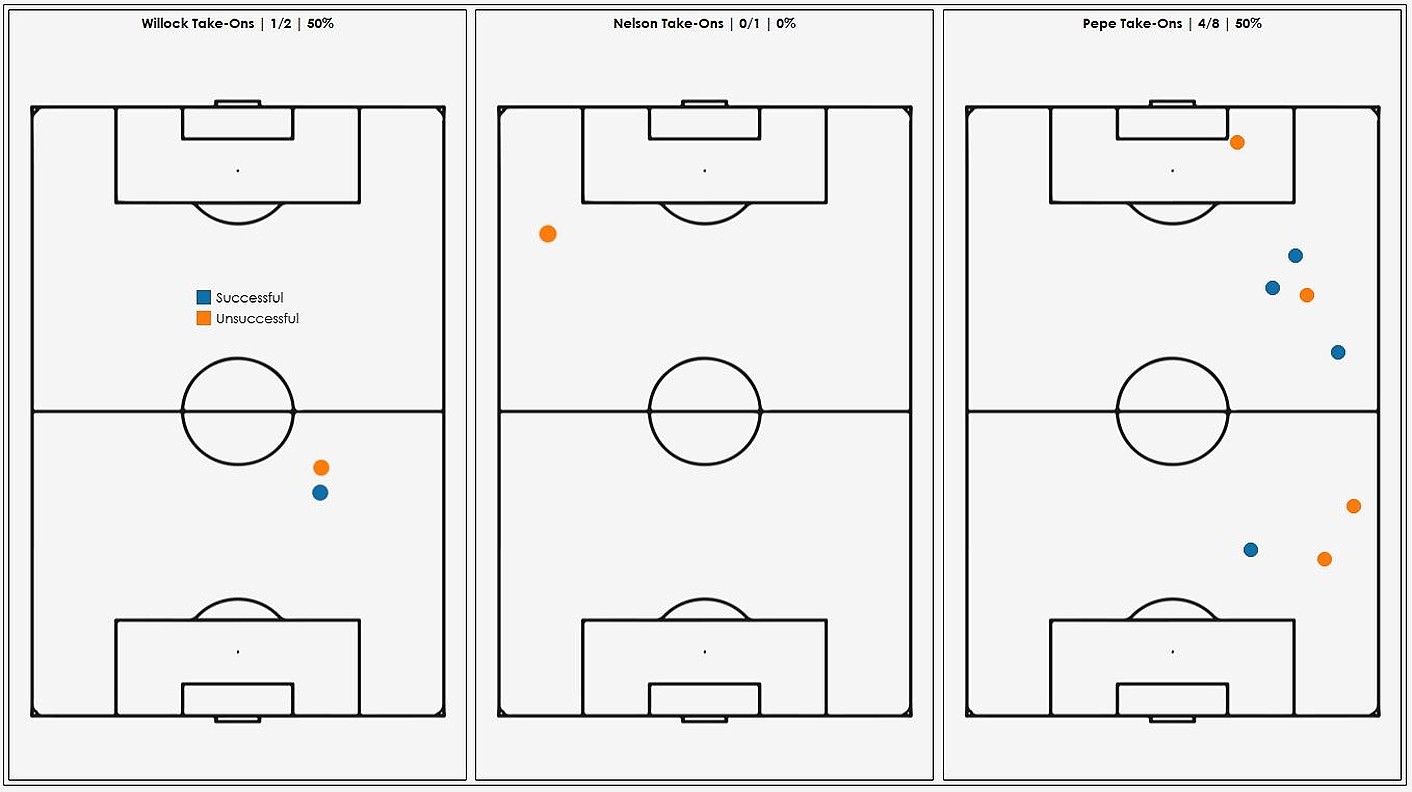 Pepe probably had the best performance of the 3, with Pepe producing a great cross for Joe Willock who should have done better with his chance, but none of the 3 will feel they put in starring performances that will convince Mikel Arteta to trust them in bigger games.

It’s Crystal Palace at the Emirates on Thursday before Arsenal again welcome Steve Bruce’s Newcastle to the Emirates next Monday.

Previous articleArsenal 2-0 Newcastle: By the numbers
Next articleArteta impressed by ‘leader’ Pablo Mari

Arteta unsure if trio will be available...

The visuals back up what we saw on the night: Tierney has been consistently excellent. We need him for the important matches ahead.

I think Willian, Willock, Pepe, and Nelson need some U23 games under their belt before they get another game with the big boys.

Var Will Solve The Problem
Reply to  naked cygan

Why waste opportunities for the under-23 team? I say we loan them to Norwich and 20 mill and get Emi Buendia….and make Willian’s loan for 2.5 years!

I agree.Willian is so low on confidence it looks like he has only just started playing the beautiful game.As for Nelson and Willock they have been given enough chances.They only have to look at Saka who hit the ground running when given minutes the lad is now playing for England and doesn’t look out of place.Pepe has the ability but his decision making needs to improve big time to guarantee him more playing time.

Saka confidence grows, Willian’s shrinks. I think it’s a good job there is no crowd or he could be getting the Eboue treatment (which I did not like btw).

If blogs is looking for evidence of Pablo Mari’s long-passing go to 102:00 minutes vs newcastle for his pirlo-esque ping to Pepe. Pretty sweet.

Thanks Dom, I think the visuals show the game far more as I remember than the numbers (sorry Scott). In particular the Willian contribution against ESR. Much of Willian’s work was done out wide whereas ESR did it where it could hurt the opposition. I also think the contribution of Mari to our defence is being underplayed. A couple o poor passes, yes, but his tackling and positional play was good alongside Luiz. Newcastle put loads more crosses in because they were aiming at their big forwards and, in the past, we could have crumbled but held fast. The usual… Read more »

I thought Pepe was alright. You can at least feel a sort of threat when he has the ball. I don’t think you can say that about some others 😬

Leno didn’t have too much to do but when he was needed he was outstanding!