Arsenal wins again while continuing the run of Arteta not losing in the FA Cup as a manager.

Before we get too far, for this match I was only able to watch the first 25 minutes live before I had to switch over to the radio commentary. So I will probably do less analysis here because I heard the descriptions of the match, rather than watching myself (beyond the match of the day highlights).

Arsenal 2-0 Newcastle: By the graphs 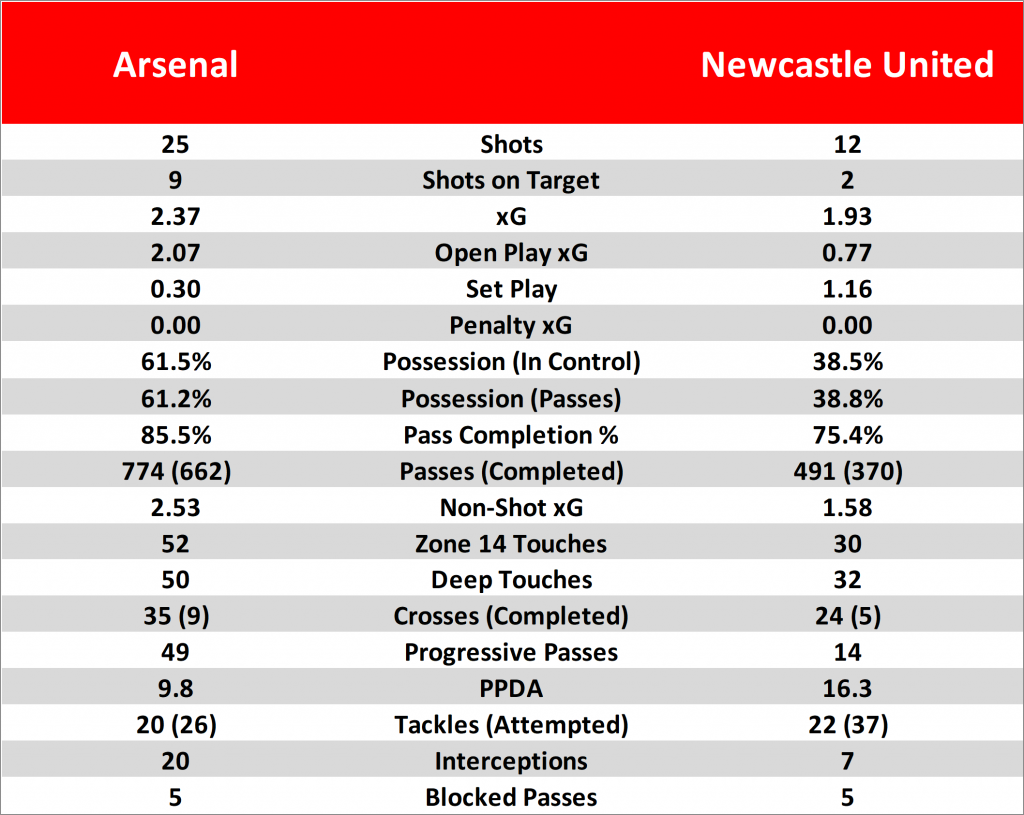 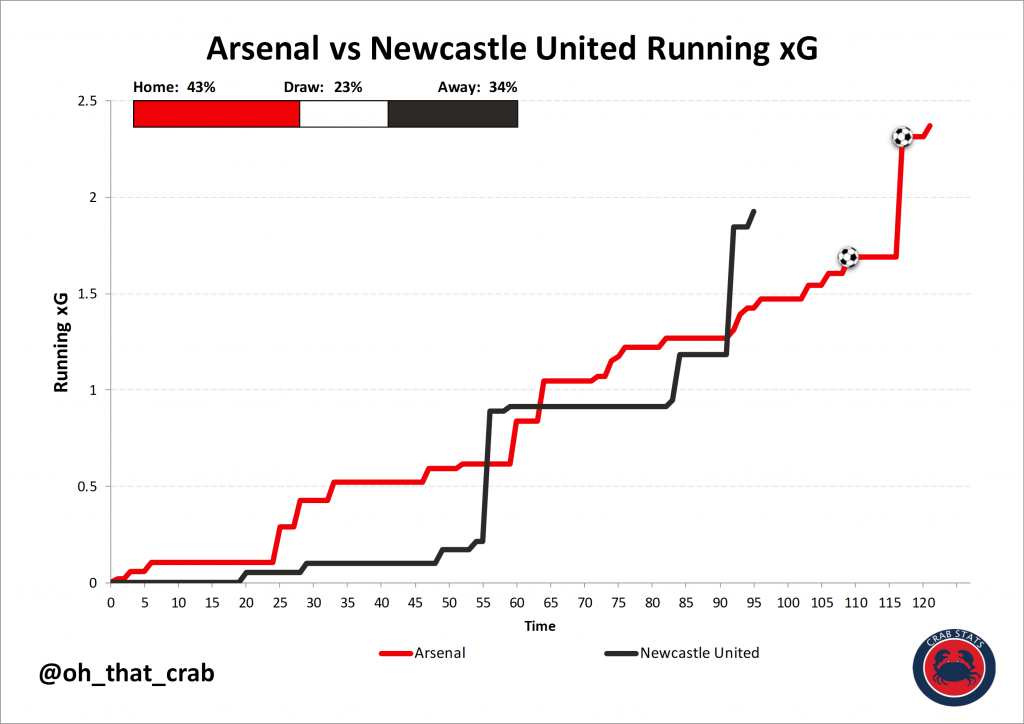 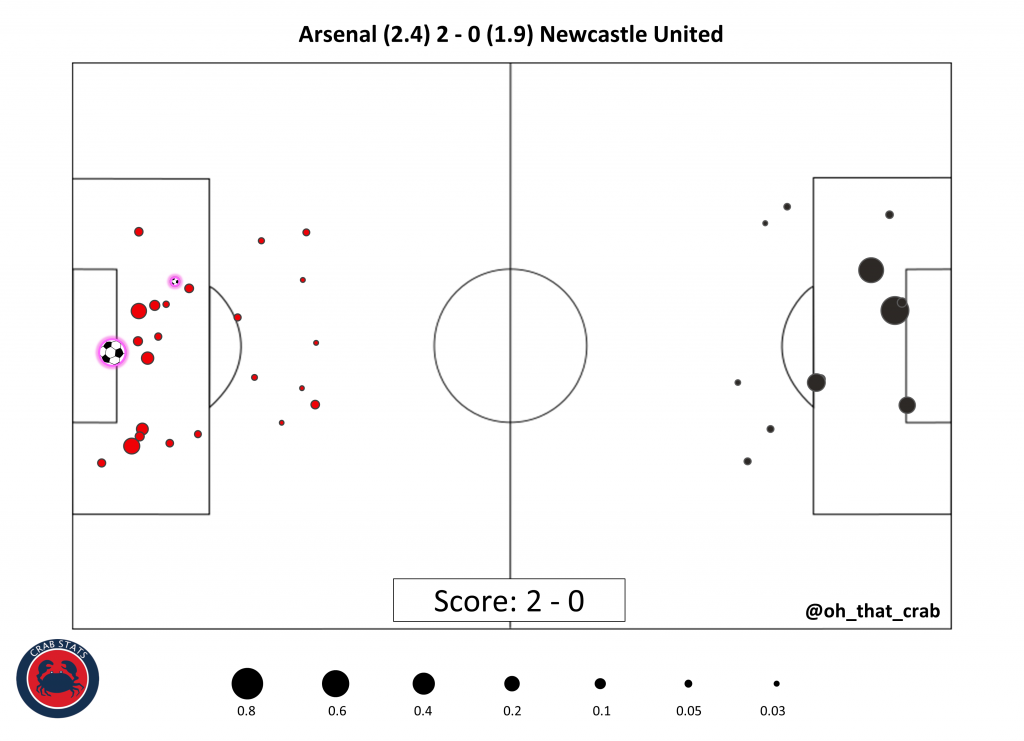 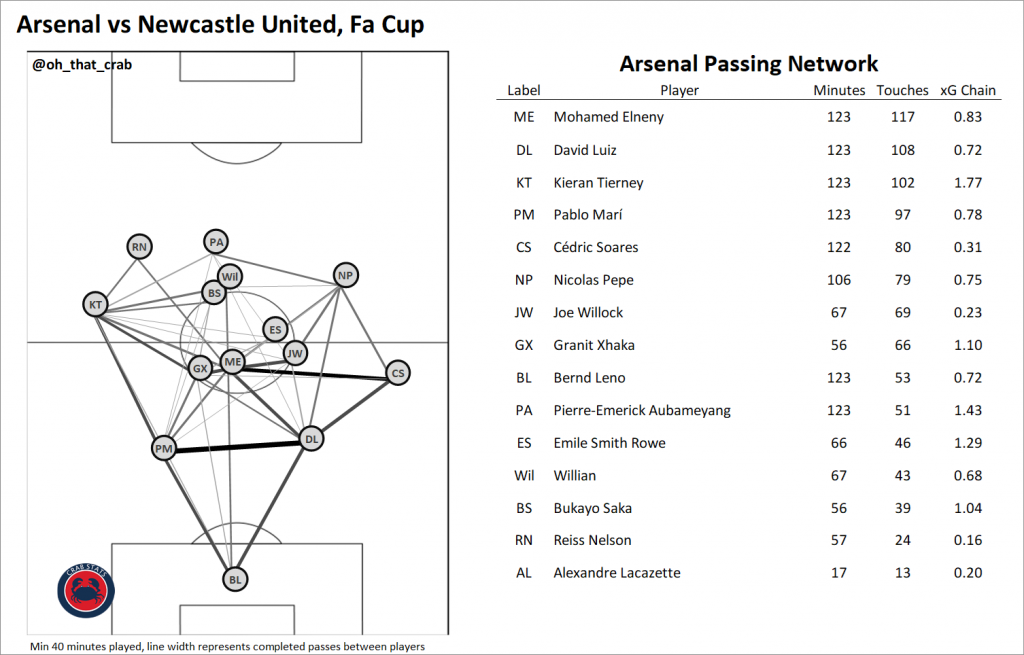 On the Andy Carroll shot in the 56th minute, the flag goes up from the linesman but in the event data, it looks like the offside is never actually given. The next action is a substitution and when play restarts it is from a goal kick and not a free-kick. The replay showed that he was onside so this is a truer reflection of what “should” have counted but also highlights how small things can change single match interpretations.

2 – Big chances for both teams during regular time

9 – Passes completed into the box during regular time for Arsenal

10 – Passes completed into the box during regular time for Newcastle

18 – Touches in the box for Arsenal during regular time

15 – Touches in the box for Newcastle during regular time

60% – Possession for Arsenal during regular time

During regular time this match was very even, and with the better scoring chances going to Newcastle very well could have ended with them winning. Running a match simulation on the regular time shots says Newcastle win about 58% of the time.

8 –  Shots for Arsenal in the extra periods

0 – Shots for Newcastle in the extra period

1 – Big chance for Arsenal in the extra period

16 – Touches in the box for Arsenal in the extra period

4 – Touches in the box for Newcastle in the extra period

In the extra periods, Arsenal was the dominant and the only team that looked like they wanted to win the match instead of going to penalty kicks.

Presented without comment because I think watching this with one’s eyes would be very important.

Make of this what you will.

Kieran Teirney has a stormer

One of the things that came through on the radio commentary and the highlights is that Kieran Teriney was everywhere and doing everything in this match. The stats that he put up in this match back that up. It has been fun to see him be given more attacking freedom and he has repaid the faith that Mikel Arteta has shown him with some very good attacking production. It is very easy to see why he is becoming a fan favorite.

Last week I asked you to take a survey on how you think things are going at the club. The results of that survey are here. Thank you to everyone who took the time to fill that out.

Sources: Opta Via Whoscored, my own database

Previous articleArteta: We’re going to keep trying with Willian
Next articleArsenal 2-0 Newcastle (AET): By The Visuals

I appreciate the Willian v ESR numbers. While ESR sparked the team, should also be considered that he had Saka, Laca, and Xhaka round him. Willian did not. I’m not here to defend Willian. I’ve found him frustrating too, but I did not think his performance vs Newcastle was as bad as many have reported. I also still have hope that he can contribute, and I also still remember dreading playing against him. My Willian glass remain half full, although it’s been teetering toward half empty.

People talk over and over ESR and Saka. Which is deserved. However it is (again) the introduction of Lacazette that is the game changer. His contribution is understated. He is more of an Arsenal legend than auba or Ozil will ever be. He is world class, he was already in Lyon. A clever player always playing for the team.

This is all good, but let this sentiment not lead arsenal to extend his contract. If he keep’s playing this way, we might be able to get decent bucks for him in the summer.

Shows that Leno is v good for us.

The numbers look more like what we grew to expect under Wenger (ie better than the oppo in most matches).

What’s the different between a forward pass and a progressive pass?

My definition of a progressive pass is a odd that moves the team 25% or 10 yards closer to goal than the team had been previously in that attacking move. Passes completed in the box are automatically counted. Passes from the defensive 1/3 are excluded.

The willian v esr numbers are interesting were Willian triumphs lots of the stats. Funny thing is if one watched the match he didn’t create chances or be a goal threat. Evidence that stats don’t always draw a true picture. The right thing to do is get rid of willian and bet on Pepe to become better or save Pepe’s value and sell him eventually. We just can’t afford a misfiring Pepe and Willian. Blocks resources investment elsewhere while others flourish in those provisions. I like how westham cut their losses with Haller. Accept and be decisive. Zaha’s recent comments… Read more »

A Different George
Reply to  Mcheza

I think stats often help us see things we missed during a game, or that we saw through the opinions we already had. So, it looks like Willian wasn’t as bad as we thought. Wrong, he really was.

GraeB
Reply to  A Different George

You looking to put Scott out of his job? I also tend to believe my eyes rather the somewhat USA football style stats but enjoy reading them.

Agree. What probably made a difference was the urgency with which ESR did the same things as Willian. Willian was slow and ponderous, allowing Newcastle to set up the block whereas ESR was more one touch, quick interplay which unsettled the Newcastle defence. Probably having on-fire Saka and Laca to play off helps the game.

What a player Tierney is! Probably the first name on the teams sheet for me (as far as outfield positions are concerned).

Agreed. His pace with the ball is tremendous and the subtle feint to stop and then kick on is amazing.

Also nice to see other players feeling they had to copy the short sleeves (Luiz and Cedric).

Thanks Scott. Would you mind clarifying the xG vs SoT xG issue again please? I thought that the latter would always be higher than the former, as your chance of scoring is always higher once you’ve got the shot on target but, in your recent articles, I’ve noticed that it often seems to be the other way around, e.g. Auba’s goal above merits 0.63 xG but only 0.48 SoT xG. I’m I reading these wrong somehow?

SoT xG looks at where on the frame the shot is. That one looks bad on that measure because it is basically right in the middle of the goal but there isn’t anything on where the keeper is so in reality it really underestimates.

These sort of “statistical analysis” reminds me of an old saw.

In an analysis (insert: lawsuit, engineering analysis, medical crisis, etc.) a practitioner says to the person called in to assist, the one with the fancy credentials, the Ph.D. in economics, or mathematics, etc.

Practitioner says, “Okay, doc, what do the numbers say?”
Doc, pauses, leans in, and says, “What to you want them to say?”

Hi Scott, Many thanks for this as always. As Homer alludes to, stats don’t always tell the complete story but I am very happy to have this analysis as another data point. I have questions about Non-shot Xg and PPDA. On the former, do you use NS Xg to predict how many goals we should expect to score based on the type of possession we have? Am I thinking about that correctly? On PPDA, in this game we were at 9.8 and Newcastle made 491 passes. So does that mean that we took a defensive action every 50 passes? Newcastle… Read more »

Non shot xG for me helps see about which teams were better at getting into dangerous locations. Often this will lead to shots but sometimes not. So I like to see both to get an idea.

For ppda, because it’s looking to measure pressing is only for passes by the opposition in their own half and defensive actions in the attacking half.

Gotcha. That makes more sense on PPDA. Many thanks