THE LOWDOWN
After a poor performance in the draw against Reading last weekend, Arsenal will be keen to put the travails of early January behind them. The preparation for the Reading match was hampered by players needing to self-isolate due to a covid case in the squad, meaning there were several players who were only able to train a couple of times before the match.

There will be no such excuses this time as West Ham come to Boreham Wood. The Irons played Durham in the Conti Cup quarter-final on Thursday night, winning 3-0 and qualifying for a semi-final clash with Chelsea. West Ham are under new management with Olli Harder at the helm following Matt Beard’s departure.

Arsenal WFC are 3rd in FA WSL, 2 points ahead of City (who have a game in hand). They've played draws to Reading & Chelsea while losing to City & United.

They seem not very comfortable building out the back, seemingly lost the zap in possession.

Will they make the UWCL? pic.twitter.com/Uo5EljwliA

Back in September, the Gunners trounced West Ham 9-1 but, there again, they thrashed Reading 6-1 earlier in the season before being held to a draw by them last weekend. The energy has looked low in the Arsenal camp for a while now and Arsenal need to pick things up quickly- not least because they have crunch league games against Manchester City and Chelsea in early February.

The draw against Reading makes the league title increasingly unlikely, finishing in the top three and qualifying for the Champions League has to be the first priority, even though Arsenal will know deep down that scrapping for third place is still not good enough given their standards. The Gunners need the points and they need to put the bad odour of Dubaigate and their subsequent poor performance against Reading behind them.

TEAM NEWS
Jordan Nobbs missed last week’s game with a tight calf, according to Arsenal. The camp has, understandably, been quiet this week so I’ve no insight into how likely she is to be available for selection on Sunday. Jen Beattie and Leah Williamson will almost certainly come back into the team after only being fit enough for the bench last weekend. Steph Catley (hamstring) and Viki Schnaderbeck (knee) are still out.

LAST TIME OUT
A Jill Roord, hat-trick a brace from Vivianne Miedema and goals from Kim Little, Beth Mead, Leah Williamson and Caitlin Foord gave Arsenal a 9-1 away victory at West Ham, who had Gilly Flaherty sent off in the first half. Last season, Arsenal opened their campaign at home to West Ham and were 2-1 winners thanks to goals from Beth Mead and Jill Roord.

THE OPPOSITION
West Ham parted company with Matt Beard recently after an inconsistent two and a half seasons in charge with lots of player turnover. West Ham have lots of quality players and their 10th placed position shows Beard struggled to eke the best from them. That said, their form had started to improve prior to Christmas, with a thumping win over Charlton in the Conti Cup, they ran Chelsea very closely at Kingsmeadow, losing 3-2 before thrashing Bristol City 4-0.

Harder says he wants to implement a new high pressing style at West Ham but he got off to a bad start with a 1-0 defeat to Spurs last weekend. However, the Irons restored some belief with a comfortable win over Championship side Durham on Thursday, after which Harder said, “The girls will be off tomorrow and Saturday will then be prep for Arsenal.

“It’s been a big week for us, considering we haven’t played any football and then three games in just a few days. Hopefully we’ll be ready to go. I’m really enjoying it at the moment. It’s been difficult with the COVID situation, but on the whole we’ve had a good response from the girls, and the Club has 100 per cent supportive of what we’re doing, and they can see the long term vision of what we’re trying to do here.”

PLAYER TO WATCH
In the Reading game, Arsenal struggled to play through the Reading press in the first half. With Olli Harder promising a high pressing approach for West Ham, how the Gunners move the ball from defence into West Ham’s half will be critical. Arsenal’s problems with the Reading press ceased when Leah Williamson and Jen Beattie came on at half-time. 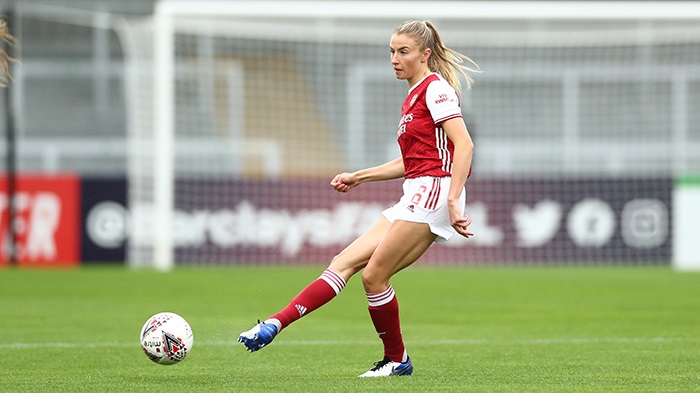 Williamson in particular is Arsenal’s primary creator with the way she passes the ball out- she is also very capable of dribbling away from pressure too. When the Gunners beat Reading 6-1 in September, Leah played in midfield alongside Lia Walti and Malin Gut wasn’t quite able to replicate Leah’s role in a midfield double pivot against the Royals. 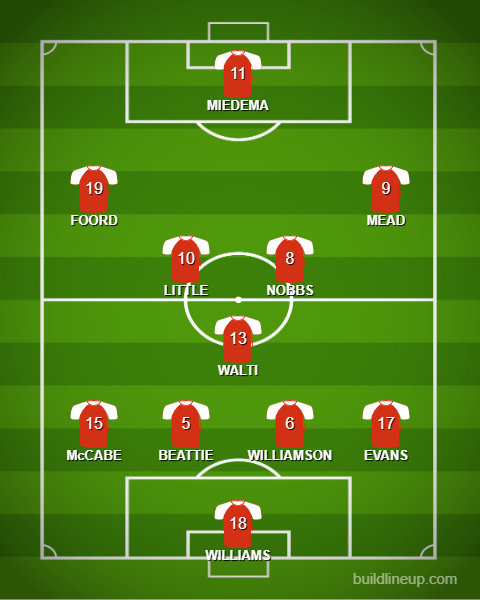 HOW TO CATCH THE GAME
The game takes place at Meadow Park and kicks off at 12noon on Sunday but will, of course, be played behind closed doors. In the UK, the game will be shown live on BBC Online and the Red Button. The match will also be streamed on atafootball.com in the US, Germany and Italy, it will be shown on Optus in Australia, Sky Mexico in Central America and the Dominican Republic and viasat (streamed on viaplay) in Scandinavia and Finland. Everywhere else, it will be on the FA Player app free of charge.

COMING UP
We will have match reaction from Joe Montemurro on the site shortly after the game, as well as the usual analysis piece on Monday. If you haven’t read it already, we spoke exclusively with Louise Quinn about her move from Arsenal to Fiorentina last summer.

I hope the team can at least improve on the Reading performance. A win would be great even if it’s not convincing.

If the predicted XI is correct, it will mean the boss is still persisting with goalkeeper rotation😣

What that unbeatable Reading side that got held to a draw against the WSL powerhouse that is Aston Villa?