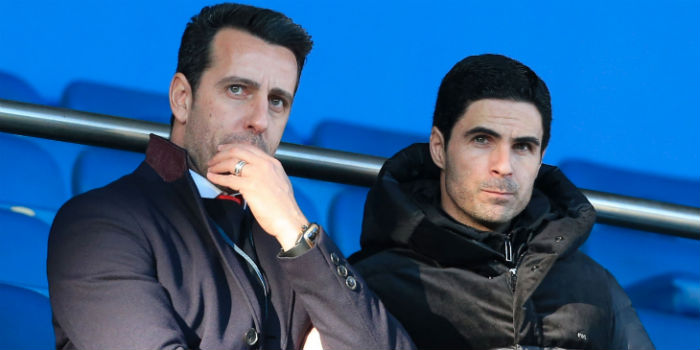 Mikel Arteta has confirmed rumours that Richard Garlick will join the club as a replacement for Huss Fahmy.

Fahmy left his position as director of football operations in the autumn and the Gunners have been on the hunt for a suitable replacement ever since.

In Garlick, we’ve found someone with considerable experience. The 43-year-old has spent the last two and a half years as the Premier League’s director of football having previously spent eight years in administrative positions at West Bromwich Albion.

Garlick isn’t expected to complete his move to the Emirates for a while longer – we imagine he either has a lengthy notice period or has been placed on gardening leave – but the boss is excited to have filled a vitally important position at the club.

Speaking after last night’s 0-0 draw with Crystal Palace, Arteta noted: “We lost Huss at the start of the season and he had a really important role because he was a very important link between myself, Edu, Vinai and the board.

“We need a person with a lot of experience, who knows the job really well and has connections in English and international football. As well, someone who can bring some ideas and some qualities that we believe are required in the business, the way we want.

“I’m really excited. I met him [Garlick], he’s certainly the candidate we wanted. I don’t know [when he starts], we have to respect the process, he’s at the Premier League at the moment and we’ll see when we can get him.”

Arsenal made a big song and dance about the decision to streamline the club’s hierarchy back in the summer. In the aftermath of Raul Sanllehi’s exit, Arteta was promoted from head coach to manager with a remit on a par with technical director Edu.

When Arsenal’s form subsequently fell off a cliff, there were some suggestions that Arteta may have taken on too much, but he insists Garlick’s arrival isn’t about relieving pressure on him personally.

“It’s not about the pressure, it’s about bringing people into our team that are better than us at doing certain things. That’s going to make us better.

“We had to replace Huss, who had a really important role with the first team and the Academy and with a lot of administration work which is needed with other entities around Europe. We needed to replace him, there’s no question about that.

“We’ve been looking for months and we all decided that the best person to do that was Richard.”

I’d actually love to know what Huss’ job description was. I thought he was just in charge of contract negotiations, in which case he did a poor job. Am I missing something?
Let’s hope Mr Garlick can add something better

If he brings his own pen and the ability to sign, scan and send a loan document he’ll already be a massive improvement, based on the balls up with Saliba

Add a few cheesy lines and a baguette and we have a winner winner Garlick dinner.

Hopefully he can ward off the bloodsuckers

They used to be known as lawyers. Funny

Great. Just when the Partey puns were dying down…

Only Edu would bring Garlick to a Partey.

Let’s hope he doesn’t stink it up.

His predecessors stank up the place. Let’s hope that he’s a breath of fresh…….

And by works – I mean that he makes a positive impact straight away and that he sticks with us for the duration of his contract and perhaps beyond.

What we don’t need is someone who comes in, in June – say – and by the following February he’s off. We badly need some continuity in the off field personnel.

On top of the bread and butter of the role, I reckon Garlick can add that special extra flavour.

Especially when things get hot.

Reading Garlick, I came here to check who would look at the recipe side of it. Sure enough, C.B. couldn’t miss it.

Honestly, we’ve needed a revamp in the recipe side of the club for such a long time. Doris the Tea Lady just hasn’t been cutting it lately. Although some of us may long for the old classic days when the simple mince pie would send us top of the European Super Delicious Culinary League table, modern cuisine has evolved beyond this and requires a stronger punch and a consistent and formidable press of flavor and spices. Garlick has clearly been brought in to fill this gap. Bravo to the board for changing with the times.

Though are onions competition or friends for garlic?

Where does Garlic like to go for a drink?

Not to mention, a very distinct odour. Okay, I will see myself out

Balogun’s contract situation will be his acid test. I hope it’s not too late already!

It is a fine acquisition, but I think Garlick is not the only missing ingredient.

On a serious note: where’s the reserve goalkeeper that we desperately need? We are one injury away from disaster! Yesterday, Runnerson was one the bench: he should have been quietly moved out of the club by now. He is nowhere near good enough for Arsenal Football Club. It’s this kind of pathetic management that’s doing so much damage to the club. A decent number two keeper is an absolute must in this window. Maybe the club have deals lined up and are playing the usual brinkmanship games. I hope so because we definitely need at least 3 quality signings in… Read more »

You are obviously missing Wenger.

Possibly, but which Wenger – the early model or the later one? The early one certainly, the later one no. We’re only now getting near to the end of several of the disastrous signings/contracts that were agreed in his later era. Let’s all hope Mr G doesn’t use that as a template or we really will be in trouble.

Right. If anyone needs a reminder why Arsene had to go, take a look at the squad he left behind at the end of 2017/18 – taking into account ages and contract situations of our best players at the time Things were already starting to go poorly, and a cliff edge was inevitable, Wenger or not. Completely unsustainable and needed a huge and shrewd investment in the transfer market to fix, which was beyond his abilities at that point That we’ve been hit and miss in the transfer market and with contract negotiations since doesn’t mean it was a mistake… Read more »

I wonder how close Runarsson would have got to the Benteke header Leno kept out yesterday? I reckon he’d have done well if he got within a metre

I know our performances have largely stunk this season, but this is a bit extreme. Having said that, would clove to see him do well.

Obviously, he couldn’t join us during Emery’s reign, him being a vampire and all.

lets see if experienced Garlick is more out of his depth compared to Arteta!

Pretty stupid comment if I say so myself…do some research instead of just parroting a narrative!

Arteta is an inexperienced manager. FACT

The proof of the pudding … as they say. I recall that similar things were being said about his predecessor though. Arsenal have entered into some pretty awful contracts over recent years. I’m sure that we call all name several players signed (or re-signed) on terms far more favourable than appeared necessary or deserved. We need more expertise and basic financial discipline in this important area – even more important as VFM must be the key consideration due to the financial state that the club is in now. Hopefully, Mr G is the man for the job – time will… Read more »

Huss let the power go to his head IMO…

This is significant news. After at least decade of turbulence and conflict amongst the board running the club this side of the atlantic – at least now we have a leadership team who should be all on the same page, all seemingly collaboratively appointed as part of the same generation, and therefore invested in each others success.

I came here to say I find the Garlick jokes very cheesy but now I have to go see a man about some bread.

I don’t know about this chap. I mean the role is not dissimilar to Dick Law’s. Get the deal over the line. Problem is Edu is in way over his head. We are not selling players and that has impact to our transfer kitty. We simply don’t have money and this was coming with outlays to flops in Saliba and Pepe costing 99m committed over 5 years having impact. They don’t just go away bc you send a player out on loan. Then wages have increased again with silly move for Willian at 220K per week not to mention extension… Read more »

This should be Wenger’s

Garlick adds a bit of flavour to the management team 😉

Somewhat off topic, but keeping in line with contracts and transfers, Ray Parlour has said on TalkSPORT that Jack Grealish is the player that Arsenal need to move heaven and earth to sign – and I couldn’t agree move. Nothing has annoyed me more recently than our lack of creativity from midfield and people subsequently and ignorantly slagging off Auba for his lack of goals. Grealish wouldn’t come cheap, but then we don’t seem to have any problems coughing up £250k a week for the pile of crap that is Willian. Time for Kroenke to be tapped up for another… Read more »

Garlick butter do a good job! I’ll be crushed if he doesn’t get chopped otherwise.