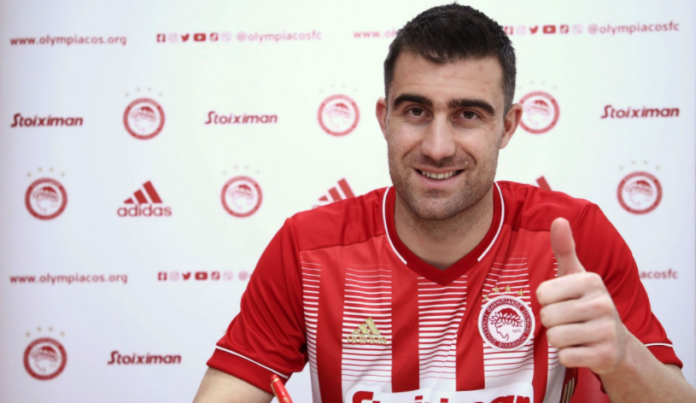 Olympiacos have confirmed the signing of Sokratis on a free transfer just days after the Greek international terminated his Arsenal contract by mutual consent.

The 31-year-old has penned a two-and-a-half-year deal and returns to his homeland after 12 years playing his football in three of Europe’s top divisions.

Sokratis was signed from AEK Athens by Genoa in 2008 and went on to spend two years on AC Milan’s books. A successful season-long loan spell with Werder Bremen was turned permanent in 2012 before Borussia Dortmund came calling.

The Greek enjoyed five fruitful years at the Westfalenstadion winning the DFB Pokal in 2016/17. 12 months later, Arsenal paid £17.6 million for his services and he went on to make 69 appearances winning the FA Cup against Chelsea in what proved to be his final appearance for the first team.

Best of luck to Sokratis, he’ll no doubt come back to haunt us when we inevitably draw his new side in the Europa League.

His face doesn’t get any smaller does it?

Bloody hell it’s all go at the moment

Did Olympiakos tap him up?
Or did we tap him down?
All I know is, unlike a Harry Kane penalty appeal, someone got tapped.

He was tapped. Scary man.

And he’s only 31, 28 when he signed. Footballers seem to exist in this different age / time continuum.

David Luiz is two years younger than me but if I ever met him, I’d feel like I was meeting a noble elder.

He’s coming to the end of his life

Beowulf is younger at heart than Alan Shearer.

Didn’t realise he could smile

Papa was a rollin stone

From height and speed considerations, he might have been.

Harsh on Sokratis. Limited in skill but made up for with his experience, tenacity and leadership/organization.

Well, his “tenacity” got him a lot of unnecessary bookings/suspensions. There’s certainly nothing wrong with a defender being tenacious – it’s a big part of the job – but he’s also got to have the skill to transform that into effective defending/tackling etc. – which also means staying on the pitch as reducing your team to 10 men isn’t a good idea! The good/great defenders have it, but they don’t pick up the number of cards he did. Overall, he wasn’t a good buy for the club, but perhaps he’ll do better in Greece so good luck to him there.

Being honest about it, Sokratis simply wasn’t up to the standard required in the PL. He was, on the whole, a clumsy tackler which is why he picked up too many cards – and gave away too many silly goals (directly or indirectly) for the team. Watching him “live” as I did on many occasions at The Emirates, you always had a nagging doubt when he went in for a tackle or interception – and too often for comfort at PL level that doubt was proved correct when he missed his tackle, mistimed it, and/or got an unnecessary card.

The steadiness, the composure, that cool is what you need in the backline. You don’t need panicky heads. Recognise them. Get them out. I love Mari for the steadiness he brings into the side. Gabriel, even with limited experience is a natural. Fans might be thinking only about creative signings, but Ornstein told us that a right sided centre-back is very high up the list. It will add to the spine rejuvenation we have seen with just two individuals. Imagine two more technically and mentally sharp STRONG players running and chasing down balls. I hope transfer department gives us more… Read more »

Totally with you on this. Great analysis.

Players who didn’t move us forward in a long lasting and sustaining way are duds. It doesn’t make the players wrong. They are limited.

They cannot improve a team on their own, like a single Gabriel or Partey could. Its our transfers department’s fault for choosing these players who couldn’t make the step up, or push team forward in quality just on their own.

Totally with you on this. Great analysis. Why so many negatives? I don’t get it. It’s so obvious what you say.

Although it’s not the players fault we bought him (and many others). What would you/I say if the Arsenal came calling? I b….y well know what my answer would be.

I don’t agree on Torreira, his first season was positive, then when Arteta came in he hadn’t the opportunity to play regularly, he’s not worse than the current midfielders expect Partey, it shows, once more, the inadequacy of our “manager”

Or your inadequacy as a “poster”

What does that even mean?

Emery was the one that nobbled Torreira. Arteta played him but then he picked up a broken ankle…I think he might have lost a little something after that…struggling to understand how he’s not useful to Simeone.

Simeone has changed formation at Atletico, he no longer plays the 4-4-2 now that Partey is gone. Ironically, he wanted Torreira to partner up with Partey, and Arsenal took the mickey out of that lol

When you look through signings over the last decade, Papa is nowhere near the bottom. Many in the current squad are worse!

Olympiacos has already got 2-3 very good defenders and cruising in Greece. This is for their EL depth I suppose…

Dude he is gone. Why not be happy for him? Don’t be caustic. Olympiacos knows why they signed him. Now focus on Arsenal

decent defender just not great on the ball. Not really sure he did anything wrong to justify not getting a look in but best of luck to him

When the team’s game is to play out from the back and you don’r have the calm or the technique to do so, your future is never bright.

Nope, better to play a centre back who never knows where the ball is until it hits the back of the net, who can ping the odd 50-yard pass.

Happy for him. Great move for the man

I was thinking the same,I reckon 350k a match and no resale return. It’s absurd!!!

He’s gone home. Wish him the best to be honest.

You were never meant for the pace of the premiere league Sokratis, go, be amongst you people

One of a number of players Arteta was unable to get back on side for him.

Good to see him finally find a club but the greater issue is we have been unable to off load and mint some money with unwanted players.

This has fundamental impact as well to our transfer budget as we have already over spent with Saliba, Pepe then Gabriel and Partey.

Which is why we are currently fishing for short term loans.

Its not a sign of a well run club.

Solid pal with a great mentality.
It is not around Papa where Arsenal’s core problem lies. Wish him best of luck, a good character said farewell to the Emirates

We paid nearly 18 million for him and he only played for us 69 times for us! That’s hard to believe and it doesn’t represent value for money.

Should have played more but arteta developed a weird obsession with mustafi last season.

Rather liked him. Decent player, if unspectacular. Good luck to him back in Athens.

Liked his tenacity and no nonsense attitude, but was never at the level to help carry our defence. Typical Raul era signing. Wish him well, though. Thanks, Papa

For Fuck sake Arsenal, announce Odegard already. My lockdown anxiety is killing me

Excellent. Time to move on.

Good luck to you, Papa!

Random thought, but out of the first 11 that beat sp*rs in Decmeber 2018, only 5 are still at the club. Plus Torreira out on loan.

The 7 on the bench, only Laca, Elneny, Ainsley remain, plus Guendouzi out on loan.

Oh… I thought it was going to be Genoa.
I enjoyed his first season performance. Plenty of dirty tricks. I think VAR basically ended his Arsenal career given he couldn’t get away with it anymore.

Was never going to be our greatest defender, but he was certainly never our worst. Always gave his best for the club and brave as a lion.

Saw off the tooled-up scum of the earth cowardly cunts that tried to mug him and Ozil.

I wish him well.

That was Kolasinac, not Sokratis.

So many departures, I can’t keep up! 🤣

Thank you, you are a fantastic player.

Fukn Love Papa
Old School
Top bloke
Big attitude.
Wily as fuck.
Nuff Said
Maybe not what we need going forward but he did what he does.
And like a steel rod up the spine when Arsenal dressing room needed it most.
Glad he’s had chance to move ack to the sun.

Also a(nother) sign the club is making smart decisions to move forwards.
And about fukn time it is too.