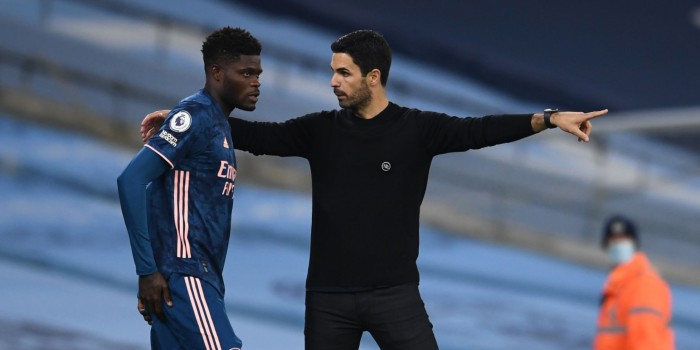 Mikel Arteta says Thomas Partey has the ability to “make players around him better” and rued Arsenal’s bad luck that the Ghanaian has only managed to play two full games in the Premier League since signing on transfer deadline day.

After consecutive starts against Leicester and Manchester United – the latter performance particularly whetting the appetite – the 27-year-old picked up a thigh problem against Aston Villa on 8 November and has been struggling for fitness ever since.

While the player rushed himself through rehab to return against Spurs a month later, he suffered a relapse before half time and has been sidelined ever since. Given the number of games that have taken place in Partey’s absence, you’d be forgiven for forgetting he even exists.

Against the backdrop of his side’s poor form, it’s been particularly frustrating for Arteta but the Spaniard sees light at the end of the tunnel. Back in full training, the summer signing could be part of the matchday squad for tomorrow’s match with Crystal Palace.

Ahead of the game, the boss was asked if he’s seen enough from Partey to think he can have a big influence on the way Arsenal play.

“Absolutely,” said Arteta, “and obviously we’re able to watch him in training and who he is as well.

“I think he’s got a different presence. I think he brings something different to the team, it’s not just about his talent, his physicality, it’s who he is as a person. He makes players around him better and that’s a big, big quality.

“It’s incredible that we are in January, we signed him in the summer, and we only played him twice (full 90 minutes). We haven’t really seen the impact that we believe he can have on the team.

“Obviously, we have missed him. On the other hand, we’ve seen players stepping in as well. When that happened they gave us some really positive news, but it’s going to be a big bonus if we can keep him fit.”

Arriving in London just as the capital’s lockdown restrictions ramped up hasn’t made it easy for Partey to settle in his new surroundings. Add supporter expectations into the mix and it’s obvious the player has had a lot weighing on his mind during his time injured.

“When you are injured, you feel first the responsibility [to play] when the club has made the effort we made to sign him,” noted Arteta.

“He was so willing for months to be joining us, he really wants to be a part [of the team], he knows how much he can help.

“He had to deal with the injuries, with the lockdown and moving into a new place. That’s been tough for him and why he was rushing and wanting to do everything straight away. He’s so willing to come back, he doesn’t want to be alone at home.

“He’s in a really good place to be fair, he’s settled really well in the dressing room, around the staff he’s a special character. Hopefully, we can see him on the pitch finally.”

Can’t wait to see what this guy can do once he gets a run in the team, still plenty of the season for him to have a major impact. Now could be the perfect time for him to show what he is all about.

Not related but Just seen Hector’s “Unseen Journey”… Wow. Just Wow. A true legend in my eyes and a wonderful person. Keep him forever. Make him captain. Remember him signing from La Masia. Can’t wait for his testimonial. Arsenal through and through… Respect Hector. 🙌

Where can I watch it?

He’s a brilliant player and one we needed to keep – despite some who wanted him sold for a fast buck last August.

Does that make him cross and defend decently?

Errr what are you on about?

Yes he is Arsenal through and through but is he up to the quality of a Kieran Tierney? The last few games he was alright, but have you seen what KT did? Even before the injury he was an inconsistent player. And this season is no different. He can be good but he can very much cost you mostly defensivly (Villa for example, his crossing against Spurs). He is not too bad but for for his pure performances on the pitch he is nothing special. I’m watching the documentary at the moment, and can absolutly see his love for the… Read more »

Anything the team underperforms until the manager is let go or threatened, Bellerin is one of the worst player during that time.

Can’t believe how many people wanted us to sell Bellerin. Really sad to see.

Just watched the whole series it was great thank you.

Partey Smith-Rowe Ceballos midfield flanked by Saka and Martinelli/Auba with Laca up top is tasty as fuck.

More likely under Mikel, a Partey-Xhaka base quickly recycling the ball with an ESR tip works really well too

Natural Equivalent to haven’t Gabriel-Mari at the back

It is, and I never thought I’d be saying this, but on current form xhaka has to be Partey’s partner in midfield, at least for now. Credit where credit is due, Xhaka has found some form and is genuinely playing with passion and commitment at the moment. I’m not convinced it’ll last but he deserves to keep his place on current form.

he also allows tierney to be further forward, and in turn auba to be slightly more central, by filling in at LCB when we push forward.

Because neither Newcastle or WBA pressed our midfield. Press Xhaka (and to a lesser extend Ceballos – who has also struggled a bit when pressed hard) and they are nullified and forced 10 yards back again and to be completely ineffective again. Those games aren’t some new normal. Sure if teams choose to not press Xhaka at any point going forward he will probably be an excellent midfielder for us. But any coach worth his salts would press him as soon as he touches the ball (and it will happen again) and it’s a no lose scenario for the opposition… Read more »

No, it’s because we were performing convoluted position swapping that emptied our midfield and stopped all forward momentum.

Xhaka has visibly limited the occasions he receives the ball off the toes of our defenders and the gap between our defenders, midfielders and attackers has become more consistent

But this is just it. As soon as he gets pressed again or against a well structured drop defense that plays on the counter, xhaka will be exposed (exactly what Palace do) . How many more examples of that do you need. Horses for courses. Xhaka has a place when we sit off ourselves, play deep and structured, but otherwise he’s ill suited as he has shown so many times over the last 4 years.

I think this is spot on, not sure why the thumbs down.

..and that pass to Tierney for Auba’s goal against Newcastle was an absolute peach.

Ideal against teams that want to sit off and have 10 men behind the ball. Maybe against more progressive sides we go back to a holding 2, Partey and one of Xhaka, Ceballos or Elneny.

Agree. Too formitable for most.

And you’ve forgotten about our best player, Willian.

Irony: the expression of one’s meaning by using language that normally signifies the opposite, typically for humorous effect.

Sarcasm: a sharp and often satirical or ironic utterance designed to cut or give pain.

I’m trying to be humorous rather than cut or give pain.

These explanations are giving me pain.

Sorry, you are obviously a Willian fan.

Obviously. That was an example of sarcasm (instead of irony), see the definitions above…

When he id ready along with the moulding back defence he could be exactly what we need to scrape into Europe. That is if the season continues.

As much as I like partey, I don’t want us to be so reliant on any one player to help us play better, I think that responsibility needs to be spread over multiple players, I sincerely hope arteta has some plans to tackle this long term.

Diagonal backbone? An interesting new case for the Arsenal medical team to look into.

He meant a long passing lane from around the center circle to somewhere around the opponent’s keeper box/corner flag, but I believe you understood what he meant perfectly

I would say it starts at our penalty box (Tierney)?

It Is What It Is
Reply to  Eric Blair

As we’ve hardly seen anything of him since his expensive transfer I for one want to see what he can do for us over an extended run.

The way the club’s finances are looking now he’s likely to be the last “big” transfer for us for some time – unless we sell someone (probably someone we don’t want to sell).

I’d love to see him tonight but only as a sub. 20/30min, have a run around, ease back in. There’s so much talent and potential there that it would be a shame to risk starting him in the first game back.

Yes, we have to be careful. It’s a balance – he must be fully fit so as to avoid further injury but on the other hand he’s one of our most expensive players so we must get that “value” running around the pitch as much as possible, but safely of course.

Talking about talent and potential, it looks like we’ve lost one youngster who fits that particular bill – press reports suggest that Balogun will sign for R B Leipzig. If true, that’s a great shame.

Cannot wait to see Partey with ESR. He’s someone who loves the ball forward quickly with quality and pace. If you get ESR the ball faster he’ll combine with our forwards better which will lead to more chances and therefore more goals. Could be a huge half of the season for AFC!!

Palace have the joint third worst defensive record, we should go straight for the throat.

He was excellent against West Brom, hopefully he starts tonight.

“He makes players around him better”

Hmmm, I wonder if this offer covers Willian🧐

He’s a footballer not a miracle worker 😂