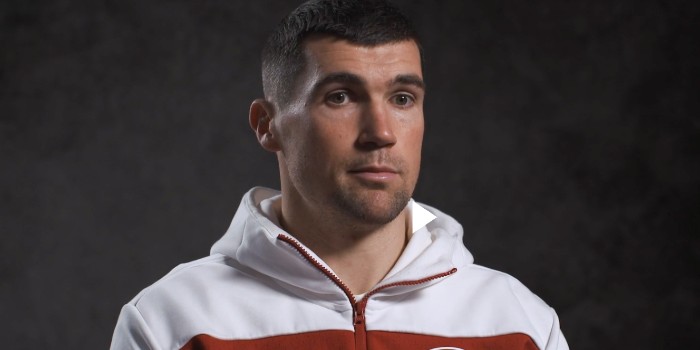 Mat Ryan says he first heard of Arsenal’s interest in him last week, but a move to the Emirates, which was confirmed this morning, accelerated in the last couple of days.

Given most transfers these days start with a few whispers and grow to a deafening crescendo before being confirmed, today’s announcement, which came out of the blue, was a throwback to life before the Internet.

The 28-year-old Australia international joins the Gunners having spent three and a half years with Brighton, for whom he was the first choice keeper until recently.

Speaking to Arsenal.com, Ryan, who will wear the number 33 shirt, revealed: “I probably first found out about the real interest maybe a week or so ago, but as far as I knew at that stage it was still a long way off happening.

“I wasn’t even sure if that was the direction the club would take but probably in the last two days, it’s become more of a reality.

“Having spoken to the likes of Edu, Mikel himself and Inaki [Cana], the goalkeeper coach, as well yesterday, that’s when it all started to feel like it was going to eventuate.”

Ryan went on to reveal that he’s been a long-standing Gooner: “There’s still an aura of surrealness to it all, to be honest.

“I’m really proud, it’s great and it’s hard to sort of put into words the emotions and feeling that this is becoming a reality.

“All those mornings as a young kid in Australia, getting up to watch the Champions League games and all that at four o’clock in the morning when I had school and these types of things. The support back in the Thierry Henry and Dennis Bergkamp days, all these sorts of things, to now be here fills me with a great sense of pride and achievement.

“I’m just looking to do the best that I can for the club and represent the club in the best possible way and ultimately help the club to achieve more success.”

Best of luck to Mat, who now goes head-to-head with Alex Runarsson and Karl Hein for the right to fill-in for Bernd Leno.

Welcome Matt. Hope you don’t pull a Runnarson on us.

It’s not that you are wrong, but it’s an ominious way to welcome someone to our club.
Considering the fact he is a gooner, he probably visits Arseblog on occasion!

this is actually a fair point. It’s hard to imagine being an Australian, 4am midweek Champions League Arsenal tragic _without_ ending up at arseblog at some point

Maty, is that you?

With three and a half years as Brighton’s first choice this is clearly no Runnarson. The blokes a proper keeper, no doubt.

Welcome to the club！

Ah this is great! I’ve got a bud who lives over in Australia and he is just a massive gooner. Like stay up until 3am on a school night to watch a Carabou Cup game massive gooner.

He’ll be so chuffed with this. I think the last Aussie to play for Arsenal was John Kosmina in 1978 and he only managed one game. But I could be wrong about that.

Welcome Mat. You’ll fit in just fine being from down under. Arsenal is the most upside down club in the prem.

Bam, get in Ryano!! Welcome to the Arsenal.

Ryano? Are you sure?
Whatever. it’s a really good loan deal for us.

Everyone named Ryan in Australia is called Ryano (pronounced Rhino)

Can confirm! So glad to see Someone from the Mariners make it to Arsenal! Watched him in the flesh when he was making his name, now i will enjoy any moment he gets to go on the pitch for us!

We did have Paul Mariner, does that count?😉

If it’s possible to merge two syllables into one, you can bet your sweet arse Strayans (that is Australians reduced from four syllables to two) will do it.

Saw Brighton play a couple of times a few seasons ago and he was annoying!!! Now he can be annoying for Arsenal when he steps in!

Amazing how our perception changes once they pull the Arsenal jersey, hoping for he’s debut tomorrow, is he eligible?

Another one needing English lessons will confuse Mikel!

You know eventuate is a word, right? Meaning to come about or happen…

Jack of All
Reply to  Grammar Gooner

Yeah but that ain’t how you use it.
Sounds a bit business school that.

My error sir. It sounds, and indeed is, an Americanism which should be avoided. Happen is a very good word.

I will, however, accept the opprobrium.

What don’t you understand about the word,EVENTUATE? Go check it up in the dictionary sir.

Could he play tomorrow, to give Leno a breather?

I’ve read that signings made up until 12pm GMT the day before can play the next day. That being said though, do goalkeepers really need a ‘breather’? Carabao Cup and Europa League group stages are finished, I would play Leno in every game for the rest of the season now. Ryan is an able #2 but Leno is world class.

In a normal season not necessarily but this year everything is accelerated given the fact the season started a month late, post season was halved and several games were postponed and still more might be. So, not the worst idea to rotate keepers sometimes as well. Besides, Leno got injured out the blue last year and for quite a good chunk of season. Imagine if Runarsson had to play later stages of FA Cup last year. That would have been a shocker. He looks like 3 levels below required standard

He likes to knock back a Rolling Rock

Good lad, happy for him, and solid work from the club.

Hold up what’s up with Arsenal’s transfer business starting to make some sense? Feels fine.

Whatever it is is the same thing that has given you 33 upvotes.

Also, just heard Grealish being looked at as understudy to Smith Rowe.

To start ahead of Xhaka maybe

Isn’t great that in the age of social media, a transfer can still happen “out of the blue”. One in the eye for all those pundits who think they know everything that’s in the wind!

According to Opta: “ -0.5 – Based on expected goals, Mat Ryan has conceded over 5 more goals than the average goalkeeper would’ve been expected to given the quality of shots he has faced this season. His goals prevented per 90 figure is -0.5, the worst of any goalkeeper in the PL this season.”

Yes, He and Brighton had a bad start this season, but look at him last season.

Form. You want to check what he was doing before having a rough time. The way BHA dealt with that has been terrible given the quality he has given them over multiple seasons, he carried them to EPL survival more than once.

Tbf he was pretty poor this season for Brighton which is why he was dropped. But was a reliable lower half prem keeper for the 2 prior seasons. Good with his feet too

I feel like he’s an Ospina-level keeper, won’t push Leno too hard, but absolutely fine for a no. 2

I think Ospina is a good comparison. I’d say he is a slightly better jumper, and his neck is definitely longer too.

I’ve always thought Ospina’s neck meant he was functionally taller as a GK than his actual height. If he had a normal length neck he’d probably be about Leno height. And seeing as GKs don’t like saving things with their face, it’s only shoulder height + arm reach that matters

Exactly, it is that sort of predgidous against the short neck goalies that turned Gladstone Small to cricket. Disrespected world class shot-stopper in his day.

This is why Peter Shilton was class.

Given Ryan’s PL experience looks like he would become the 2nd choice GK straight away.

Also, looks like his current contract with Brighton ends with this season. We might him on a free.

Overall seems to be good business.

The Dutchy
Reply to  SB Still

Just checked on transfermarkt and it seems his contract with Brighton runs until the end of 21/22 season. Unfortunately not a free transfer then at the end of this season but most likely not a big fee needed either.

All in all, seems good business to me!

We urgently needed a PL experienced keeper who can use his feet.
That is exactly what we got, in record time.
I am feeling a little more positive about the hierarchy at Arsenal for getting this done.

Supposedly a real salt of the earth chap too

Snagged us a rippa, mate!

Daveo! Where ya been mate? Matt Ryan? Phwoar, blimey. Meet me at the watering hole. We’ll shag a cold one to celebrate.

In an Aussie accent, too.

Terrible season so far. Hope he’ll do better for us.

We might not get him on a permanent basis as I don’t think he’s homegrown. Having 3 non-honegrown keepers would’nt be the most ideal scenario

Been impressed with Ryan since his Brugge a days. An astute edition.

Is he the first Aussie gooner?

Who else searched for him on YouTube and got the NFL quarterback?

I like the look of this loan. He looks a solid pick with PL experience. Exactly what was going through Edu’s mind with Runnarson one can only guess. Similarly with Willian. As mentioned we have done ourselves little favour picking a transfer manager with little experience. Some will of course say but look at Gabriel or Partey…but in truth we over paid IMO for Partey regardless of his quality. And the misses although less in amount are consequential because having mucked up thanks to Raul with Pepe and Saliba, it all gets compounded with impact to our spending power now.… Read more »