Arsenal crashed out of the FA Cup.

It is a disappointment not to go further but it would be hard to say that Arsenal deserved much more. The team that played in this match did a great job showing why for the most part they are the second or lower choice players in Mikel Arteta’s squad, with few if any of these performances changing the manager’s mind about the pecking order of the team.

Hopefully, Arsenal can come back from this bad performance (not unlike they did against Newcastle) to get back to winning ways on Tuesday.

Southampton 1-0 Arsenal: By the graphs 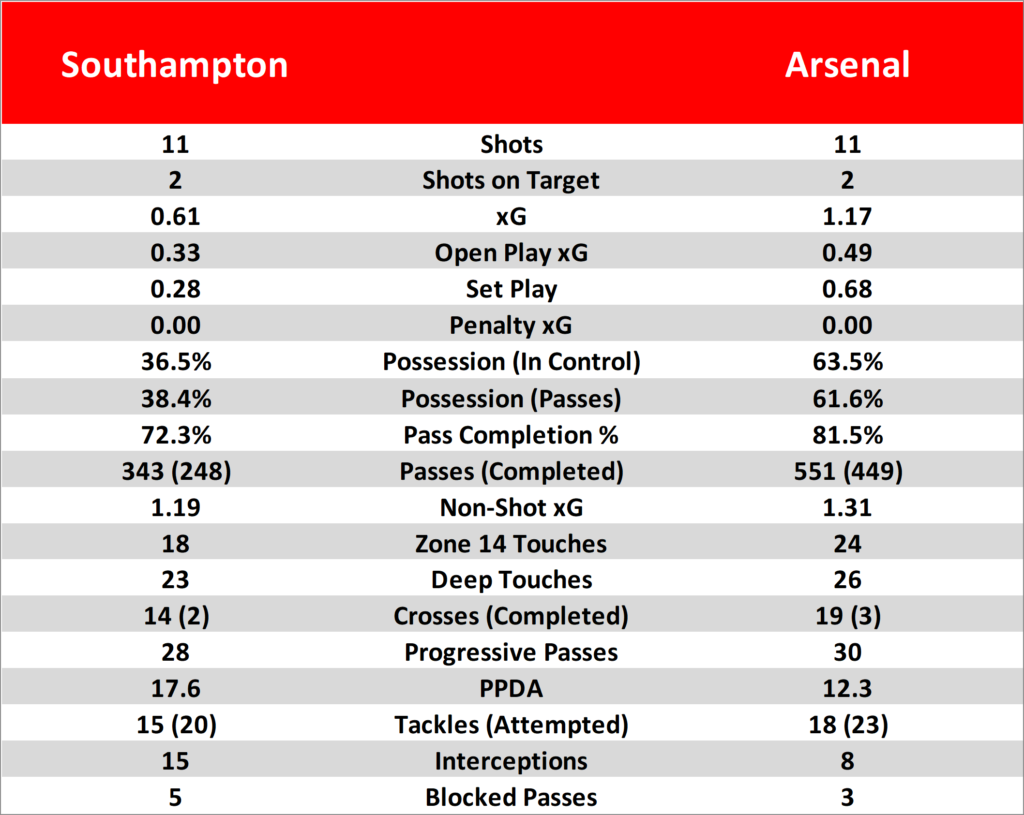 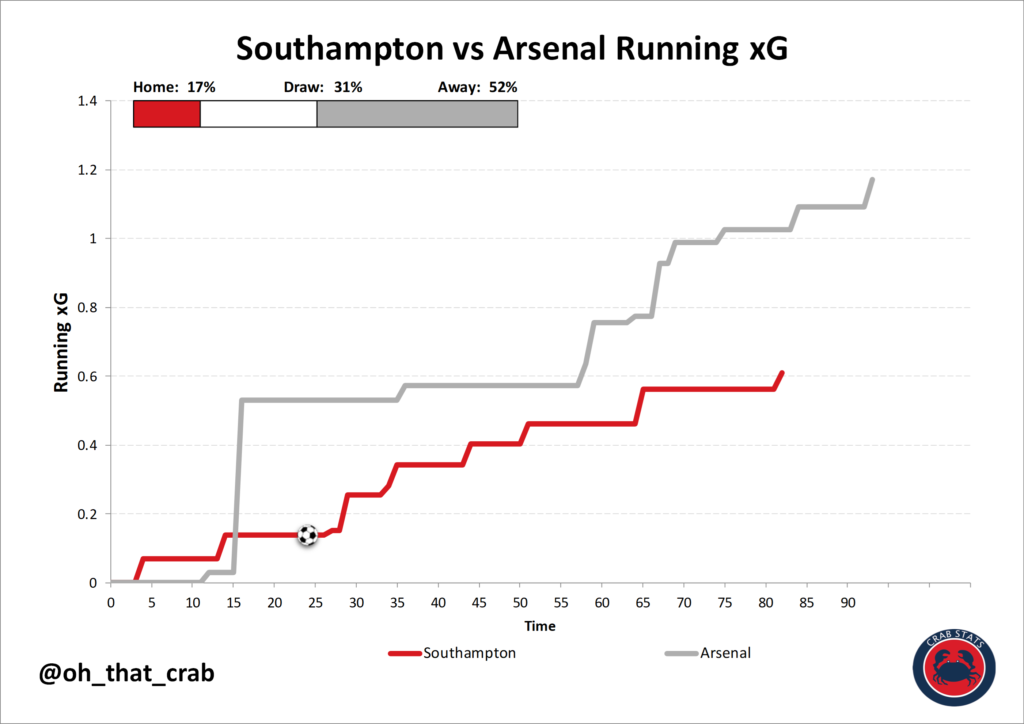 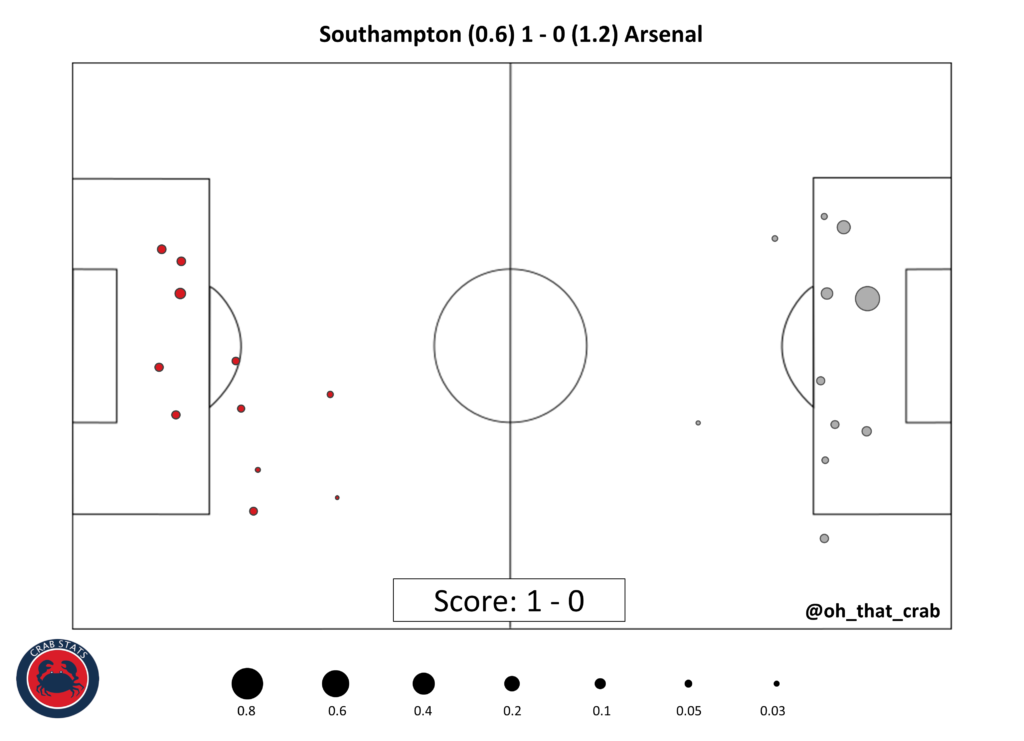 1.2 – Expected goals for Arsenal in this match. A third of that came from a wide-open (and well designed) set play chance for Garbiel Martinelli that with the angle and height was certainly much harder to make good contact with than would be assumed from just the shot location.

0.6 – Expected goals for Southampton, with two-thirds of that coming in the first half, as Southampton looked to protect their lead.

2 – Big Chances (an Opta observational qualifier: A situation where a player should reasonably be expected to score, usually in a one on one scenario or from very close range when the ball has a clear path to goal and there is low to moderate pressure on the shooter.) for Arsenal in this match. One in the first half (Martinelli) and one in the second half (Eddie Nketiah). Typically big chances turn into goals about 40% of the time so perhaps Arsenal was slightly unlucky not to convert one of their two but not massively so.

0 – Big Chances for Southampton in this match. There was a couple of dodgy defining situations and one unlucky deflection but for the most part, Arsenal did well at keeping Southampton from threatening.

12 – Passes completed in the box for Arsenal. Only 3 of those came in the first half, with the majority coming while Arsenal was chasing the game and with the introduction of the more first-choice players.

7 – Passes completed in the box for Southampton. These were split pretty even for them between the first and second halves at 3 and 4 respectively.

Like so many of Arsenal’s matches recently, this one was certainly dictated by the scoreline and in the end, probably made things look much better for Arsenal from a statistical perspective than the actual match.

This is a good match where looking at things beyond shots help to tell a fuller story of the match. Looking at the non-shot xG, which is something along the lines of progression value where the furthest forward a team gets in each of their possessions is assigned a probability of turning into a goal, you can see how this played out. 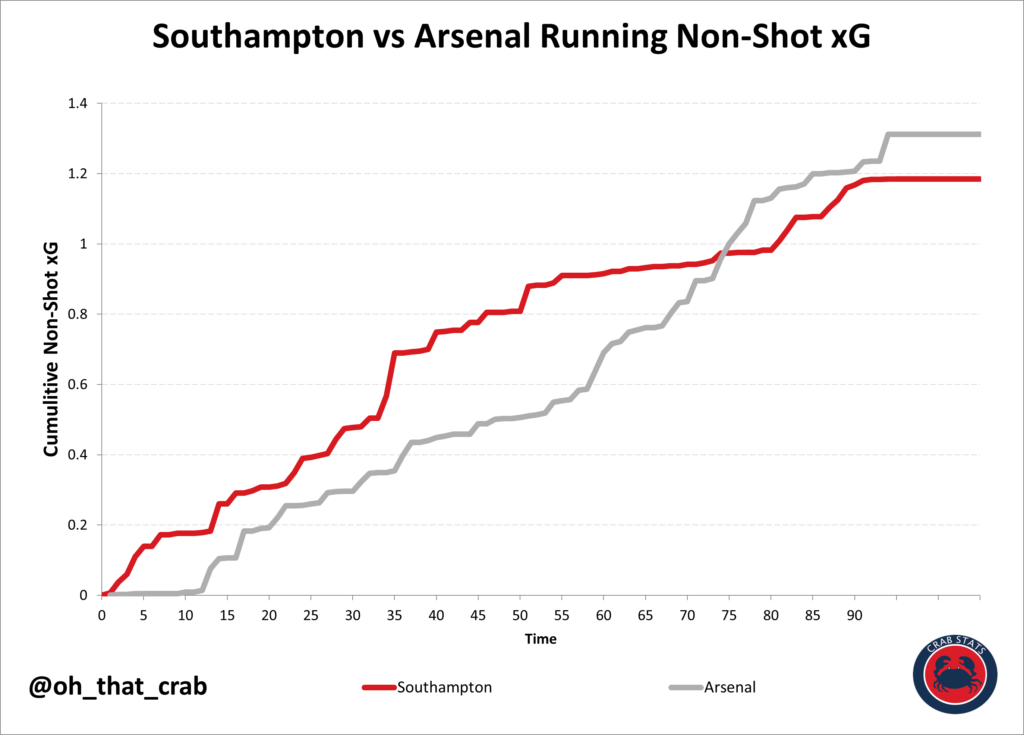 In the first half, Southampton was the more dangerous team and deserving of their lead, even if it was a bit fortunate. Arsenal came back into the match, but the pressure that they were able to apply was far from overwhelming, with just 0.8 goals expected from how far they were able to progress the ball.

The rotated squad show why they are the rotation options

10 – Final third entry passes for Thomas Partey. In his 35 minutes, he did more to move the ball to the attackers than Mohamed Elneny (1) and Granit Xhaka (4) did combined in their 153 minutes.

1 – Key pass from Cédric Soares, with an xG assisted of 0.03. Overall this match from him was quite a decline from what he showed against Newcastle. 0.03 xA vs 0.6, 1 key pass vs 2, 2 progressive passes vs 6, 2 progressive carries vs 6, 0 passes in the penalty area vs 2. He did spend the majority of the time on the left vs his favored right so there is some mitigating circumstances but it wasn’t a great performance to force more playing time for him.

0 – Dribbles for Willian. This was another match where Willian really disappointed and looked old. Far too often he will get the ball one on one with a defender and instead of trying something, either to beat the man or pass upfield he simply turns around and passes backward. He ended this match with just 1 shot and 1 key pass in this match, 2 passes completed in the box and 51% of his passes going backward.

I feel like I could do something like this for most of the players but I will end it at that. This was a poor performance by players who have been mostly disappointing this season. Hopefully, Arsenal’s preferred players will play better on Tuesday.

Sources: Opta via WhoScored, my own database.

Pointless to play so many off form players in the cup. What exactly are we “saving” our best players for? The league is gone.

Just watched United Liverpool, they are challenging for title and still fielded strong teams. Arteta got it all wrong and everyone was almost certain of that when they saw team.

It’s ok rotating the problem was the balance was hideous. Should have started with the team that ended the game and subbed off. Had we equalised they all would have had to play an extra 30 anyway.

It certainly isn’t . I think Arteta picked the right team. We won cup last year I’m ok with us dropping out. The league is mad any decent team can get a bad run and any of them could go on a good run I’m happy he rested Saka and ESR . EL , PL .. This is a numbers piece and the numbers say we are 7 points of 4th with 57 points left to play for. It doesn’t mean I believe we can do it but leagues have been won from the position we are in now so… Read more »

Oh, stats. We were better in almost every matrix but, in fact, never really looked like we could win the game.

Numbers are not telling MA that he should have taken Soton more seriously but we are.

Didn’t they beat us this year? Aren’t they above us in the league by two points with one game in hand? MA showed a bit of arrogance on this one.

I think he just prioritised the league (which he should be IMO). We need to keep climbing up the ladder and stringing league wins together. Would have been great to win, but there are another 9 games in the next 35 days. He had to rest and rotate. At this point FA cup had to be the lowest priority.

Our league game vs them is way more important . There are lots of important games coming up and we will need Saka and ESR available at their best or situation is as such that we will need to rely heavily on those 2 gems more so than what can be considered healthy and I’m absolutely baffled that so many question the managers selection for the least important of games. PL and EL are the priority,

I think that winning the FA cup was roughly as (un?)likely as finishing top 6 from where we are now. As a team desperately trying to be in Europe next year I don’t get why we would treat the FA cup as an afterthought!

Interesting though the score is the key fact.

Definitely have a chance with a better team selection on Tuesday.

We were poor but they were not great. Our first team could have won that and hopefully can on Tuesday.
What worried me most was our inability to play out from the press.

I think we have to put our best players out for the league and Europa over the next few games and then reassess – we don’t have the squad to cope with three competitions and will probably struggle with two!!! Depending on results we can put more effort into one or another – quite like the idea of us getting our act together with the core players and winning Europa

There is no other competition

-Pepe and Willian should never play together at the same time. We can’t afford to play with 9 men. -Cedric was awful at LB. Get another proper LB, or play AMN there as 2nd choice. -Nketia needs to go on loan, and give his spot to Balogun till the end of the season. -Work on the press. We are super shi*t at pressing, and even worse when we get pressed. The moment teams put pressure on us we crack. -Stop the awful pointless crosses and long balls if there is no one there to win it. -its OK to sub… Read more »

Honestly, if we’re not comfortable with AMN at LB, I don’t know why we don’t go back to a back 3 and play wing backs like last year – we’ve got Gabriel as a left footed CB. Also, agree with all your other points 100%

As Pepe has scored 13 goals and produced 13 assists it’s not all bad and certainly he should never be bracketed with Willian , even if we haven’t yet seen the best of him

Oh, common, that stat is blatantly wrong. Unless you only count *forward* dribbles.

To count as a dribble you have to take on the man and either get past them or not. He didn’t take anyone on he ran next to people then turned around and ran back the other way or was pressured off the ball without trying to go past someone.

It was dire. Team selection made me think MA was keeping powder dry for the next game, which I assume he prioritized.