Southampton 1-0 Arsenal: By The Visuals

Arsenal’s defence of the FA Cup ended on the South Coast as a Gabriel own goal was the difference in a 1-0 loss to Southampton at St. Mary’s. It was a much changed Arsenal side as Mikel Arteta looked to rotate his team in what is a very congested schedule. Unfortunately the players who were called upon did not step up as Arsenal never really looked like they were going to win the game against Southampton’s strongest XI. It now leaves the Europa League as Arsenal’s only realistic chance of silverware this season and also means the Gunners will have to qualify for European football through the league for next season. 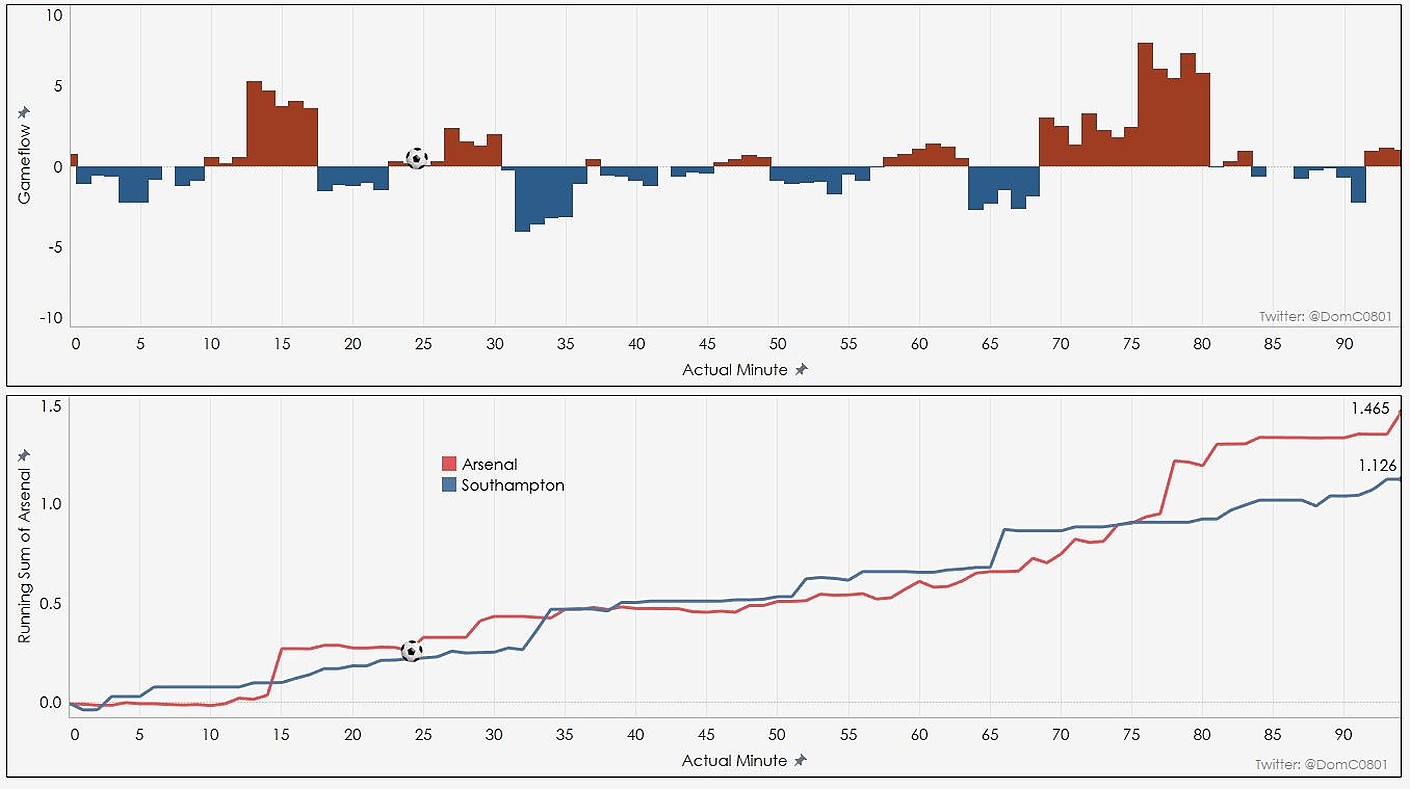 The above shows the PV Gameflow and Cumulative PV. It was a tight game with very little separating the two sides, but at the end of the day Southampton scored in the 24th minute and Arsenal were unable to get back into the game. It was a disappointing exit from a competition that has been such a source of success for Arsenal in recent years and Arsenal never truly looked like they were going to get back into the game. 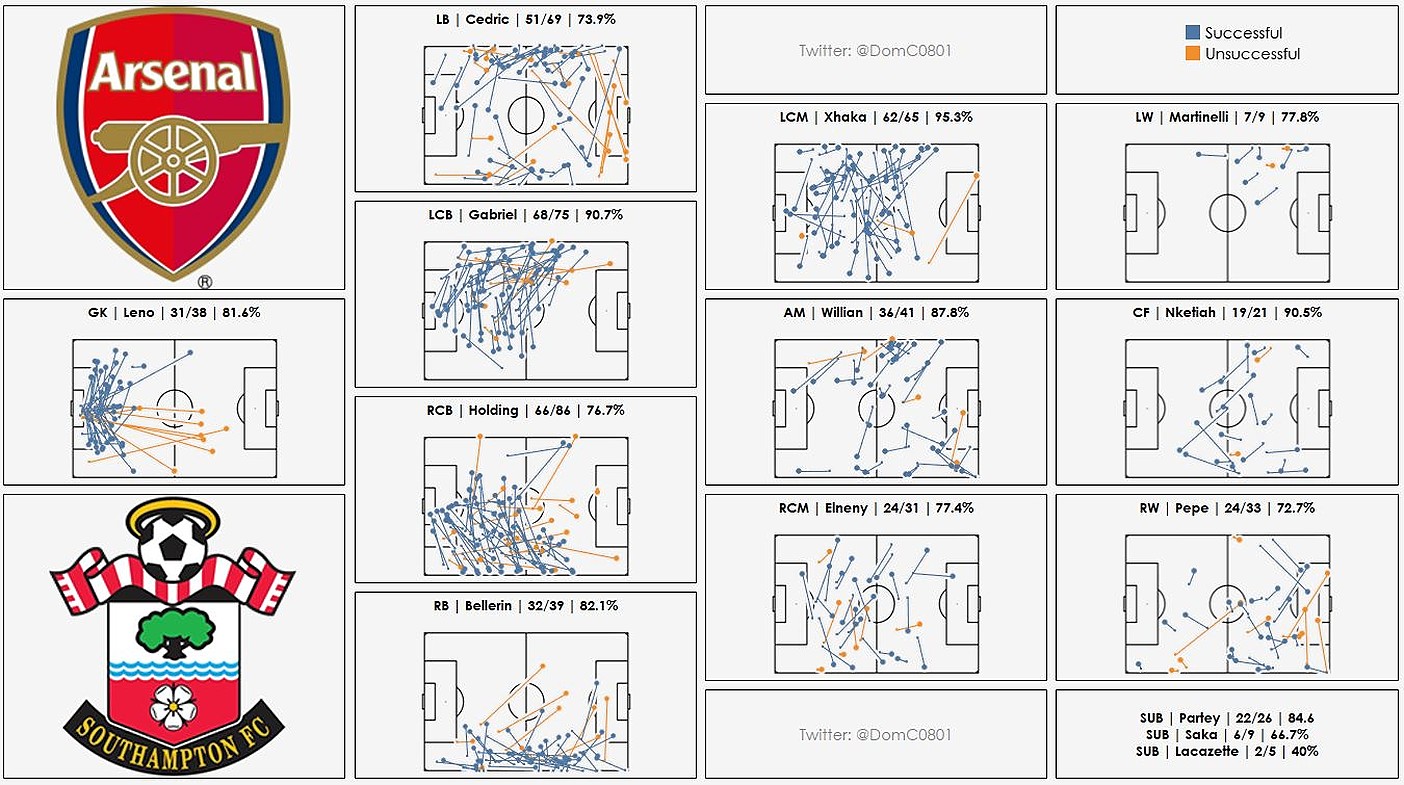 The above shows the pass maps for each of the Arsenal starting XI. Arsenal struggled to penetrate down the left-hand side, with Willian completing more passes to the referee than to Gabriel Martinelli who found himself isolated on the left-wing, with Cedric not overlapping as he opted to cut in onto his right foot. Eddie Nketiah also struggled to assert himself on the game, with the Hale End graduate being forced to come deep to get involved which really does not suit his game. It was also an uncharacteristically sloppy game for Arsenal’s defenders in possession with the 4 starting defenders combining for 52 unsuccessful passes. 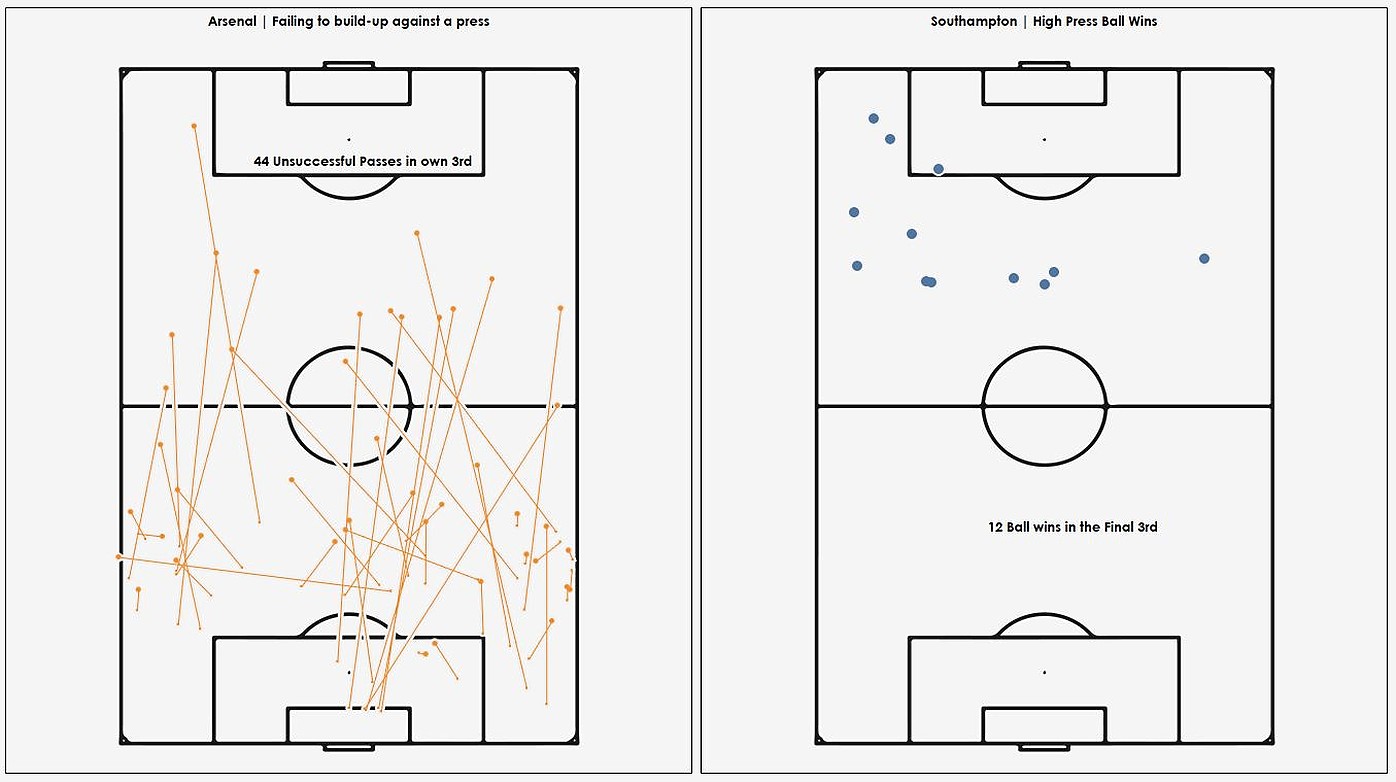 Arsenal’s failure to build-up against Southampton’s famed high-press is evident above, as Southampton managed to make particular inroads on the right side of Arsenal’s build-up. These issues began early on in the game and persisted throughout, which stopped Arsenal from being able to get into any flow for a significant portion of the game. 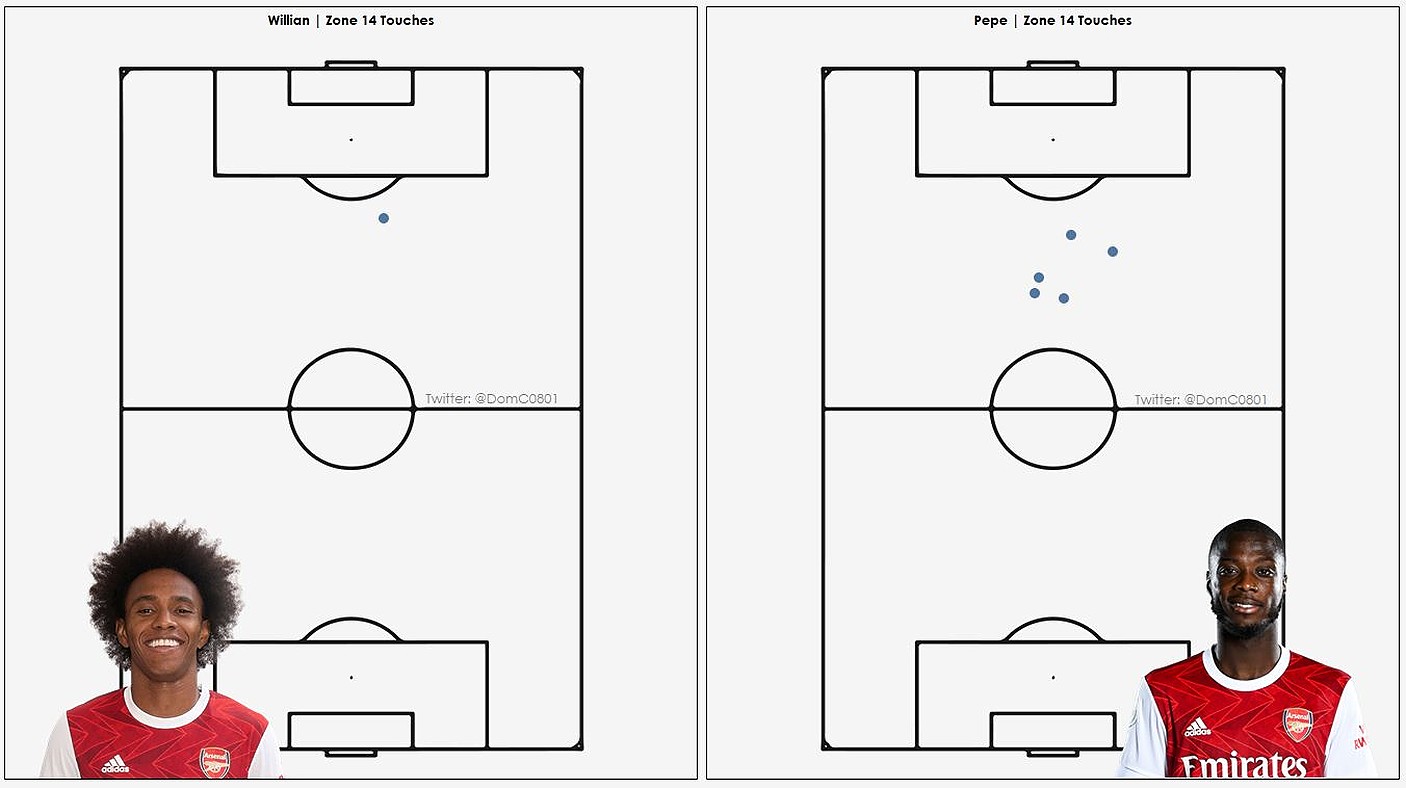 One of Arsenal’s biggest problems was the lack of a ‘Number 10’ presence. Above are the ‘Zone 14’ (the area in front of the penalty area a Number 10 would operate in) touches from Willian and Nicolas Pepe. This was a massive problem as Willian drifted out wide which made Arsenal a much easier team to defend against for Hassenhuttl’s side. The signing of Martin Ødegaard should help provide a Zone 14 presence even when Emile Smith Rowe cannot play or needs to be rested. 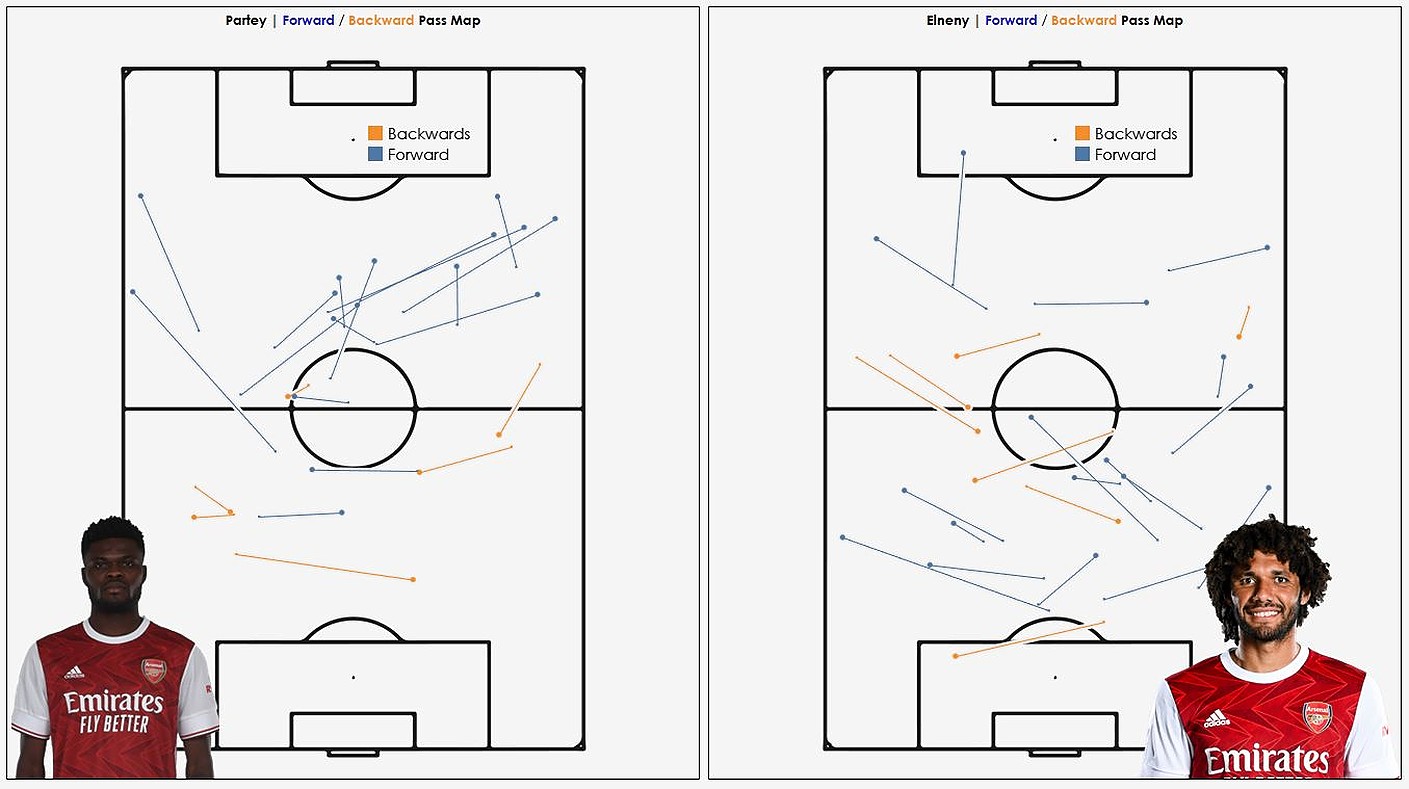 Another selection of note was that of Mohamed Elneny. The Egyptian played ahead of Thomas Partey who came on for him in the 56th minute and immediately provided more of a presence in the Southampton half. Elneny’s limitations are well known and although he is a decent squad player, he can be detrimental to Arsenal’s attacking play when used and for a centre-midfielder that is not ideal.

That’s all for today. We play Southampton again on Tuesday before Arsenal welcome top of the table Manchester United to the Emirates on Saturday.

Previous articleSouthampton 1-0 Arsenal: By the numbers
Next articleArteta suggests Runarsson will be retained

Arteta unsure if trio will be available...

Better if we win on Tuesday. First XI will function better as an attacking force. Hopefully!

Our reserve players should be able to stand up to the occasion when needed. We were the Champions for crying out loud – defend the Cup with blood and sweat, not go out with a whimper.

The point is that it was a reserve team playing against a PL team (ahead of us in the league) and one which we usually struggle against.

Yes, we’d like to think they would step up but 7 changes in itself makes continuity a problem. It’s the same reason we never win the League Cup.

Team selection – in a competition the fans love – was the issue for me.

Plus, winning a game increases your chance of winning the next especially against the same team. There is something in sport that is called confidence.

Don’t need visuals to tell me Willian was shite.

Yeah, immediately after the game I was super critical of Pepe and said he was worse than Willian. I was wrong. While I’m still super critical of Pepe (he was rubbish again) Willian was worse. I guess the thing is Pepe’s mistakes are so glaring. His inability to beat a man 1v1 has become a real problem, just like how bad he has been on the counter attack. That is meant to be his bread and butter, but he keeps failing at it. Willian just does so little, he doesn’t fuk up as much as Pepe, because he offers basically… Read more »

Agreed. It’s as Blogs said, Willian is breaking records in low bar setting by offering fuck all and doesn’t seem to put in the effort.

Pepe is making the simple things look hard. But at least he’s trying. Not making excuses for him though as you just have to compare Pepe with Saka and/or Martinelli to see how far his stock has fallen.

That season in Lille is starting to look more and more like a one hit wonder.

Sadly I agree, Willian is so frustrating because it seems like he doesn’t even try, with Pepe you can at least see he’s trying to make stuff happen. I think it also yas to do with tactics/formation. At Lille he played more like an inside forward than a winger. And so his one-footedness was not as clear a weak spot in his game. Also back in france he had more time to adjust his body and have a good angle to pass/shoot. I had hopes for him but is clear he’s just not suited for the rythm of the premier… Read more »

Yeah when we signed Pepe I was looking forward to him adding some thrust to the team, but to say he has been disappointing would be an understatement!! He needs to go in the summer for his own sake and ours!! Question is, who’d want him?

I’m hoping a return to the French league? They will know him from his break out season there and might put his poor form here down to the move away. If we got £30 million I think we’d be lucky… Awful situation all round.

Arteta made his choice: we’re chasing top four. If you sacrifice the FA Cup that qualifies you for the Europa League in order to qualify for the same Europa League through the table, that wouldn’t make sense. Plus, you can get bumped if a team outside top six, wins the FA Cup, I guess.

We’ve got no fucking chance of a top-four finish. There are at least 5 teams that are much better than us. That’s why the FA Cup was so important. Arteta fucked up by playing such a weak side. It would have been better for us to win on Saturday and lose tomorrow. We are a mid-table side that at best will nick a Europa League spot. And winning the FA Cup would have got that anyway.

So, you assume we play our best team and we stroll to FA Cup glory? Yes, we win it more than anyone else, but it’s just a tad harder than that. You assume we can’t improve our position in the league, but we will just win the FA Cup over the same teams above us? We simply have to fight to move up in the league floundering in mid-table is not only embarrassing, but that’s really not going to help us secure signings we need – take Szobozslai for example, our pitiful start clear cost us any chance at signing… Read more »

7th place will get a spot in the Europa conference league. Assuming one of the top 6 win the FA cup.
Can’t see us making the top 6.

Chelsea have no class.

Totally agree. Tuchel isn’t any better. He can speak to slow learner Werner in German though.