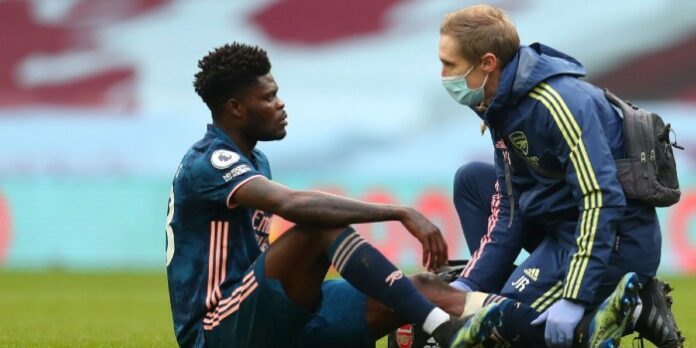 Mikel Arteta has confirmed that Thomas Partey was unable to continue against Aston Villa after picking up a muscular injury.

The Ghana international went down holding the back of his left leg with 16 minutes remaining of the 1-0 defeat and was replaced by Willian. At this point, it’s unclear how serious the damage is.

“He had a muscular injury so we had to take him off,” said the boss in his post-game press conference. “He could not carry on playing.

He added: “I don’t know [how serious it is. We will see the extent of the injury. He wasn’t feeling well enough to continue playing so we had to take him off.”

While Arsenal have eight days until the next game against Leeds United, we’re likely to face a race against time to get the 27-year-old fit.

Partey has only made 13 appearances for the Gunners since signing from Atletico Madrid at the end of the summer transfer window.

A thigh injury picked up in the home defeat to Villa in November proved so persistent he was sidelined for 13 games either side of a 45-minute appearance at Sp*rs when he aggravated the problem.

The Premier League campaign is absolutely finished now anyway. We’re noway near good enough to qualify for the Champions League, the jury is out on whether we are actually good enough to be in the Europa League. Clubs like Villa, Wolves, Leicester are so much better than us. Its scary to think that we have failed to beat even one of those teams this season. If we fail to get any sort of result away at the King Power stadium, that’ll be 18 points dropped which is shocking, Arteta or not. We wouldn’t have accepted that from Emery. 0 points… Read more »

This guy almost never missed a game his entire career, so Arsenal for this to happen.

Struck down by the Arsenal curse.. my train was passing Emirates stadium yesterday even though I was sitting down my hamstrings went..

Let’s just try and get as many points on the board this season and we can really have a go next.

The gods of football will not allow this season to go well. Time to relax and just enjoy our football with the pressure off.

I keep trying to tell myself that. This season has been a vicious cycle of disappointment, confusion, genuine disgust, cautious optimism, jubilation, repeat.

At some point, the reporter talking to Arteta after the games, needs to ask him point blank why he insists on playing him?
Does anyone know? Is it written in that rediculous contract of his that he is guaranteed playing time?
I just don’t get it

Are you confusing Partey with Willian?

Oh dear – I have made a mistake. I completely understand all the down votes. I meant Willian of course

I think my internet is broken. It looks like someone on a message board admitted they were honestly mistaken. Going to try restarting my computer…

Was he on some drug before

I think he was on Charlie Sheen…

The league is done, start preparing for next season. Just bring him back when he’s 100% fit. Who knows, we might still be in the Europa.

If we aren’t in CL next season then I’d rather us be out of Europe completely.

The way I am feeling right now I’d rather that we were out of football completely!

That would be detrimental to Arsenal though. No Europe equals less income – especially in September 2021 when most of the country hopefully will have been vaccinated and stadiums should be nearing full capacity again – and also no European football at all would mean attracting a lower quality of player in the summer transfer window.

Leciester have missed out on Europe and look at them. If the recruitment is right you don’t need Europe to find quality. And even in Europe Arsenal have still signed shit players. Not being in the CL isn’t the problem, the problem is the recruitment team at the club has been terrible for over a decade. I don’t wanna be in Europe next season if it’s not the Champions League. Maybe the Kroenkes will lose money and fuck off

Spot on. Hate this attitude of “better to not be in Europe if it’s only Europa.” It’s a few Thursday evening games and something to actually play for.

I think you can point to a couple of seasons where it’s clear that not being in Europe has helped a team keep all their core players healthy and fresh and mount a title challenge – at least 2014 Liverpool and 2016 Leicester. But I would probably take Europa this season.

Didn’t Chel$ki win the league the year they were out of Europe?

He will be fine long term. It’s like players going on international breaks. This mainly down to adjusting to the Premier League, a different climate, different training methods and also him adjusting to a new life and wanting to prove himself.

We will regret not signing Yves Bissouma in the winter transfer window.

Could be as bad for Arteta as the time Wenger didn’t sign Kante from Caens.

What the actual feck…?

Bissouma has solid Prem experience and would’ve been a great alternative if either Xhaka or Partey got injured.

Oh, yes of course. Because real life is just like the video games, yeah.

Thanks but no thanks. One overrated ex-Lille player is plenty for me.

Lol with what money? You mean from all the money we got from the Jan transfer business? Smh

Plus he wasn’t going anywhere this winter unless someone overpaid like they did for Pepe. Lol

Ah, so it seems the genius Edu and MA bought a 50M crock.
That’s fucking excellent.

Are we tired of all this success yet?

Tired of you dude…

Forget Leeds on Valentine’s Day, we need Partey back for the Benfica game – especially if it’s going to be a one-leg tie.

Partey lying on the turf was better than what came on for him.

I wonder how much of it is the cool, wet weather in England compared to Spain for him.

Same for Tierney coming from Scotland?

Tierney was injured when he arrived to be fair.

Yeah London is too cold for Partey and too warm for Tierney.

Timorous Me
Reply to  Mark

I was thinking the same thing since his injuries have been muscular, the thigh (x2) and now what seems to be a hamstring.

Another day, another injury to Partey. I hadn’t realised it was only 13 PL games played – doesn’t look good. Let’s hope he can get injury-free for a good run at least. What with Tierney as well, we aren’t getting much VFM for around £80million outlay – although it’s not their fault of course.

Maybe we need to replace our medical team..

Almost inevitable that a player with hardly any history of injury comes to Arsenal and misses the majority of the season!

2 losses on the trot, KT and Partey fucked, Willian on the pitch. We’ve got out Arsenal back!

As a life long Gooner, nearly 50 years, I think it’s time we got rid of Arteta. I remember when they got rid of Don Howe, and I went on a one boy protest, by pasting ‘we love Don Howe’ posters to my bedroom window for all to see: we lived quite near West Ham. I appreciate the fact that we give our managers time but I think it’s time to stop blaming the owners. How many people have to be sent off before it becomes apparent that the manager is not really in control? George Graham was a different… Read more »

I don’t see anyone available doing better with this group of players.
At least wait until end of season.

Hope its not serious. But in all honesty, he was a bit all over the shop at times today. Xhaka again as I have mentioned a very good performer for us at the moment. That said, felt Arteta made several poor mistakes with subs which may have cost us. Firstly I would have kept Laca on with Auba. They have quite obviously a chemistry and we lacked a presence in the box when Laca went off. Arguably, we did not have Laca high enough in the box when he was on. The shifting of Auba cutting in from left would… Read more »

jesus christ stop with the ‘as mentioned’

#Artetaout…
Your team your football your selection…
Not working!!!

So who is available to replace him?

we will have to wait unti the summer and see.
this club is on the slide badly
arteta is turning us into a midtable team he needs to go he is out of his depth.

Old get Yves Bissouma asap as partner and cover