Aston Villa 1-0 Arsenal: By The Visuals

Arsenal lost a third consecutive league game against Aston Villa as Mikel Arteta’s side succumbed to a 1-0 defeat at Villa Park after an early Ollie Watkins goal. It was a worrying display for Mikel Arteta’s side as Arsenal failed to create any great chances as Aston Villa sat into a deep defensive shape and allowed Arsenal the majority of the ball. Arsenal’s positive late December / January momentum seems to have halted and work will be needed to arrest this decline if Arsenal are to salvage anything from this league campaign. 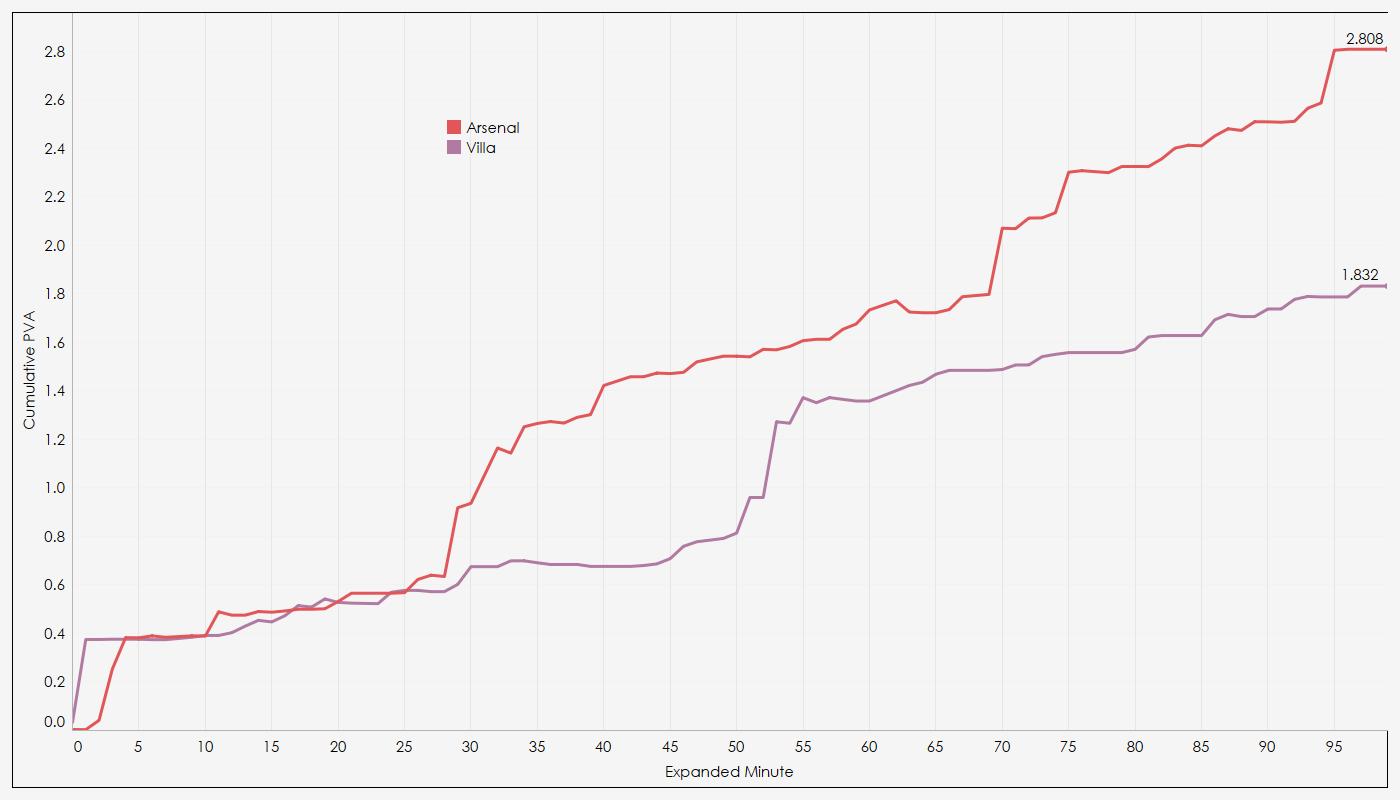 Above is the Cumulative PVA (Possession Value Added) for the two teams. Possession Value Added or PVA measures the increase or decrease in the likelihood of a possession ending in a goal based on the successful passes a team makes. Essentially it shows how threatening you are when you have the ball and whether or not your passing is effective in increasing your chances of scoring.

Arsenal dominated the game and managed to get the ball into threatening areas, but with an Expected Goals (xG) of less than 1, it shows that Arsenal are not converting these ‘opportunities’ into good scoring chances. 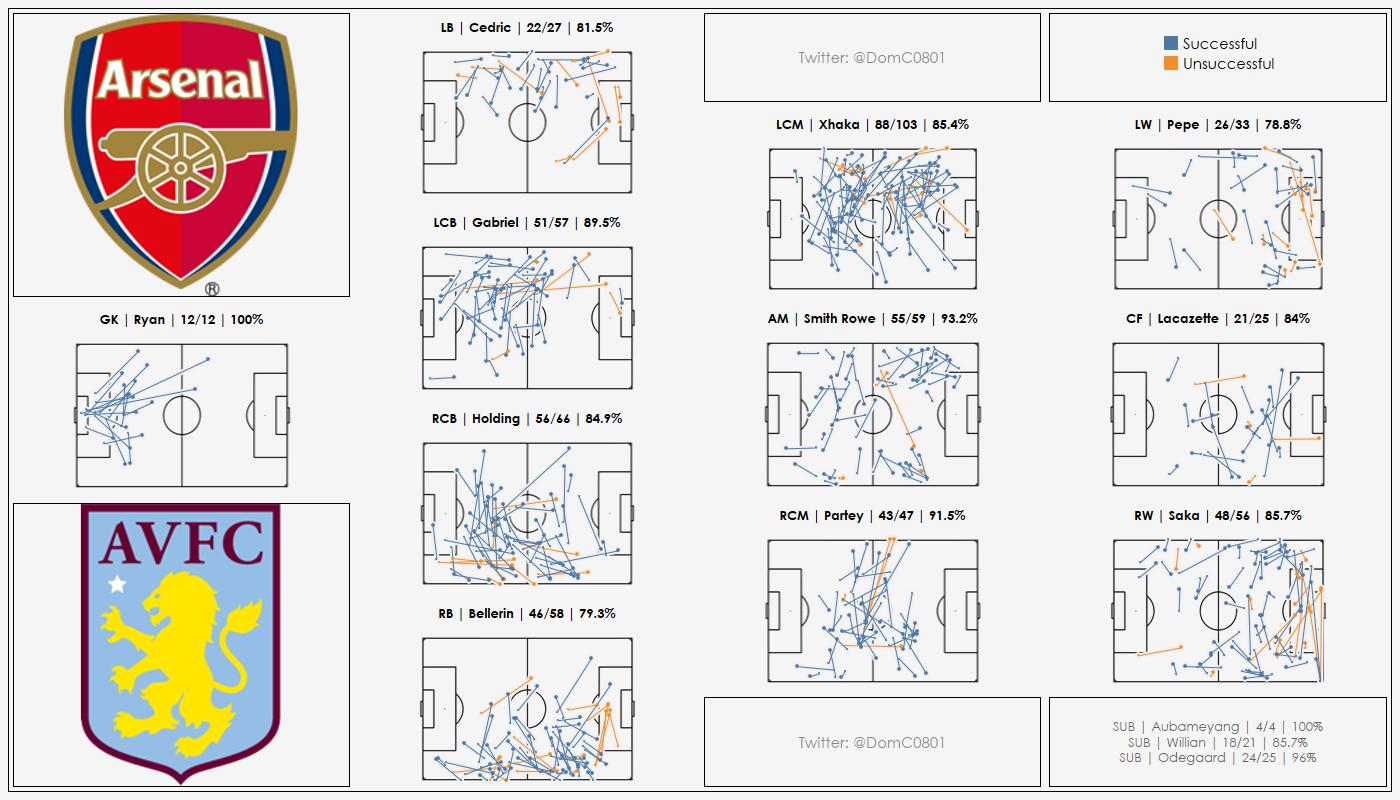 Above shows the pass maps for each of the Starting XI. Granit Xhaka was the metronome for the side and dominated the ball as Arsenal’s midfield and wingers had a large share of possession. Worryingly Alex Lacazette failed to register a single touch in the box or shot during the game showing Arsenal’s problems in creating any chances of note. 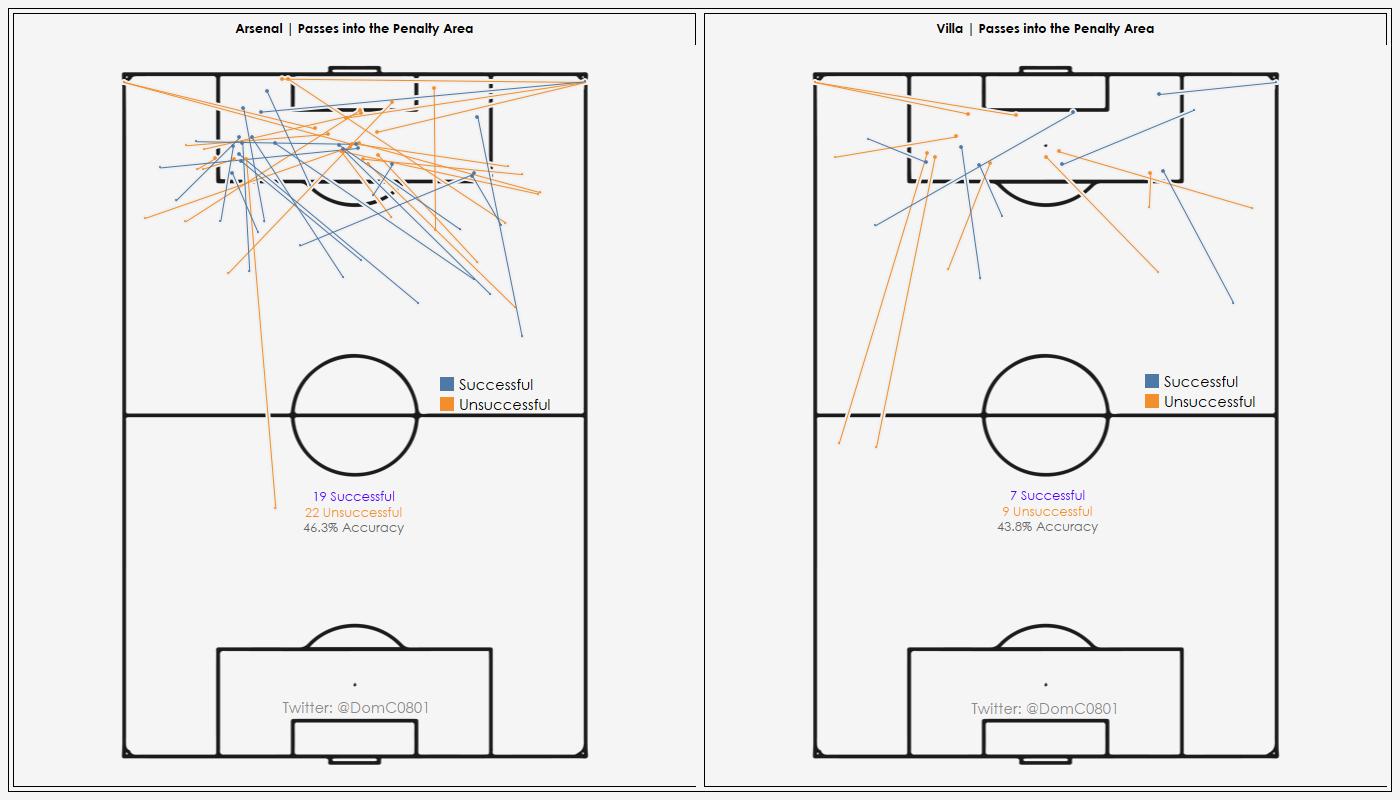 Above shows the passes into the penalty area from both sides. Arsenal’s left-hand side proved the most successful route into the Villa box, but again to have 19 passes into the opposition box and yet create very few clear cut chances is worrying. 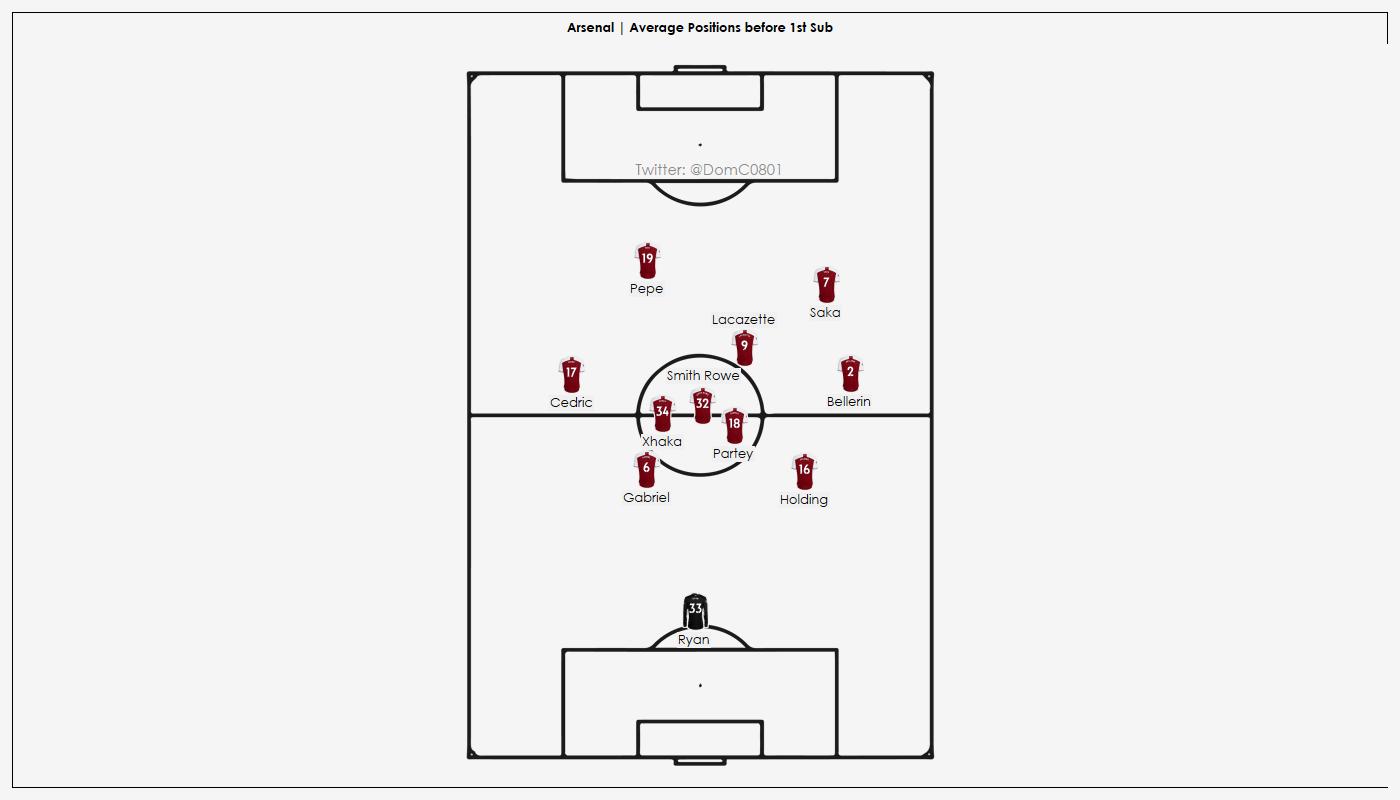 Above shows the average touch positions for the Arsenal players up until the first substitution. Emile Smith Rowe and Alexandre Lacazette were forced to drop deep to get any touches as Villa looked to crowd central areas to deny Arsenal any creative opportunites.

That’s all for today, and also will be my last ‘By The Visuals’ piece as I have accepted an analysis role at a professional club for the upcoming season. The great Jon Ollington will be taking over the BTV column from the next game and I am 100% sure he will improve the quality of it.

Thanks to everyone who has interacted with these and for the support for my work, unfortunately I couldn’t finish with a more positive game to analyse but that’s the life of an Arsenal fan I suppose!

Thanks for all the hard work Dom and good luck in your new job!

Thanks for all your analysis Dom and good luck at your new job! If you have any advice for people aspiring to similar roles then that would be awesome!

Good luck with your new role.

PVA and dominating the game are not necessarily the same. They let us have possession and they created the greater chances to score a further goal. To quote Arsene “we had a lot of sterile possession “.

Good luck at your new role and thank you very much for the visuals.

Good luck with the job. I have enjoyed the visuals pack more than just the numbers.

Giving away early goals does enable opponents to pack their box and trying pin point passing is then difficult. Also crossing to a box with only one player against 4 is likely to prove pointless.

Really enjoyed these pieces. Very exciting news for your new role though! Hopefully see you active in the comments sections in the future- or maybe a guest piece if we ever play against the team you’re joining.
Wishing the very best of luck.

To create better chances from the middle of the pitch and keep defences guessing I think a 4-3-3 with both Odegaard and ESR in the game together could work. Our centre forwards today were both ineffectual, but at least Lacazette tried. Shooting and passing were not good enough. I hope this game put paid to any “top 4” ambitions. This is a multi-year project with Mikel, I’m afraid. Comes with the “learning on the job” long-term approach. Thing is, I feel like we’ve been “rebuilding” now for three seasons. We’re going to have to spend big this summer to get… Read more »

Congratulations Dom, all the best for the new role and thanks for your visuals.

Good luck the job. You’ve helped me a lot to understand the tactics and flow of the game

Always enjoyed your analysis. Congrats on the new gig and beat of luck!!!

thank you and congratulations buddy

Blogs, kindly please insist James on uploading his on the whistle video for this match. It’s like crack for me, and i need my crack.

Great work, thanks for all the insights. Good luck with your new role

In regards to all the negativity. Villa are a good team this season, if they win their games in hand they are in 4th or 5th place, and because they missed a number of games they may be more rested than other teams. It was a close match and they defended really well, which is part of the reason we looked impotent. That said, Arteta is getting the substitutions wrong, the ref made some shit non-calls, and we sorely miss Tierney. The winning run raised unreasonable expectations -but in losing yesterday we still looked better than during our winless run… Read more »

She wore a yellow ribbon
Reply to  btw

I think the real project is actually in Arteta as he is too naive at this level. You know teams like Villa are going to start the game with high intensity and press our defenders; so why start the game playing from the back. For the first 10-15 minutes at least allow Villa to keep possession but not in dangerous areas. A more experienced manager would set up the team more securely and not to concede an early goal; particularly when the crowds are back and there is more pressure. Against Wolves, in injury time the bus should be parked… Read more »

Scoring flattered us mate. That could have been 3-0 if not for mat Ryan’s excellent debut and a bit of fortune

Really enjoyed these pieces, thanks and best of luck in your new role!

for all the stick that cedric gets, he is still doing better than bellerin going forward :/
should have sold bellerin he brings very little going forward

Good luck mate, absolutely well deserved! Thanks for these great pieces and the best of luck in your new job

Sounds exciting, hope you invent a new metric or two! I’ve really appreciated your insight and work, many thanks and all the best.