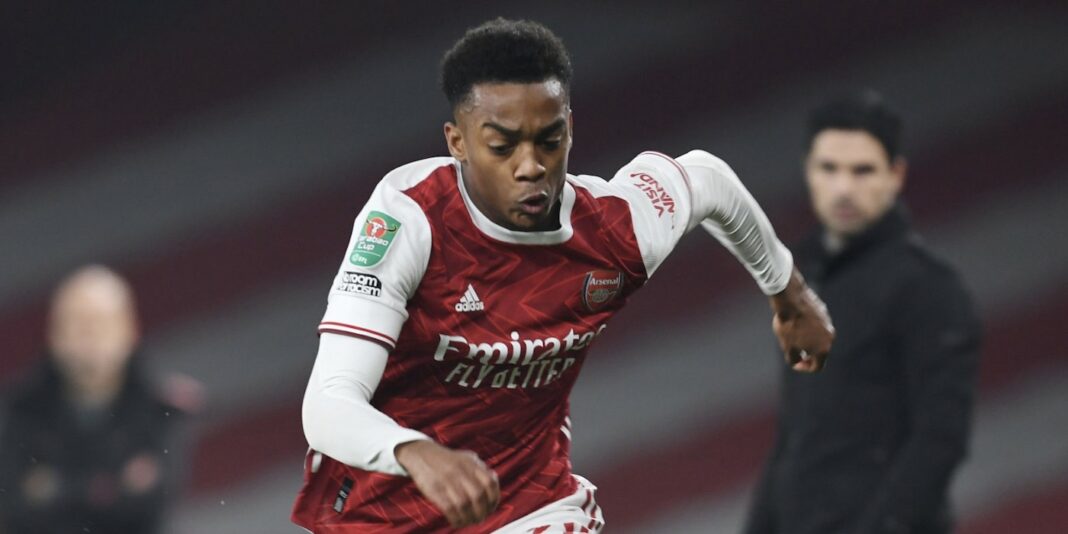 Arsenal have confirmed that Joe Willock has joined Newcastle United on loan until the end of the season.

The 21-year-old has been an impressive performer in the Europa League for Arsenal this season, scoring three goals and creating three assists in his five European appearances.

The midfielder made 44 appearances for the Gunners last season, albeit with many late cameos, and he’s at a point where he really needs to be playing more regularly.

He’ll join a Newcastle side in need of an injection of freshness, and his high energy game may help a team with just one win in their last ten Premier League games.

Technical director Edu said of the move: “Joe is a talented young player and an important member of our first-team squad. This can be seen in the number of appearances he has made for us in recent seasons.

“At this stage of his career, we have decided together with Joe, that it will benefit his development greatly to enjoy a loan period playing regular first-team football. We thank our counterparts at Newcastle United for their collaboration and we wish Joe all the best with his loan move.”

Best of luck to him at St James’ Park.

I wish him all the best, and hope that he can come back stronger

The chap just needs to learn how to stay on his feet while shooting. He has an annoying habit of falling over and scuffing shots.

Var Will Solve The Problem
Reply to  Ealing

Steve Bruce ones turned an Arsenal loanee in to The Greatest Striker That Ever Lived (TGSTEL)!
Joe will be okay.

Cultured Determination
Reply to  Var Will Solve The Problem

I believe brucey helped him along, but TGSTEL was always destined to be TGSTEL. i swear it might have been something to do with the alignments of the moon and the stars when he was born.

Always going to be tough to get game time in the centre of the park with ESR coming through as he did and Partey recovering from injury. Hate to say it but I think we have a better option for a young CM on loan in Germany and I don’t think Joe has done enough, especially this season, to prove he deserves to be a regular. If you think of the way Saka and ESR have hit the ground running, we just haven’t seen anything like that from Joe. But he’s definitely a premier league standard player and Newcastle are… Read more »

It Is What It Is
Reply to  Cultured Determination

You’re right. It is generally known that Rafiki stood patiently outside the delivery room, ready to present Baby Lord Niklas 1st of his kind, TGSTEL, GOT1, 52K.

Happy for Willock. Hopefully, he gets some game time.

Anyone know any news on Nelson? Is he Injured?

Never stopped us before

Yeah, bizarre silence around Nelson. What’s going on with him? Maybe there’s been a falling out or something?

Go get em Joe. Plenty of talent there. Regular footie could really help him.

He needs regular minutes. The way Newcastle has been playing he should get ’em. Funny, the NUFC blogs have been flogging Joe as the Second Coming Of Aaron Ramsey.

Hopefully they beef him up a bit up north, he’s seems so lightweight and easy to knock off the ball against senior prem players. He does most of his work between the lines, but holding off and riding challenges comes with the territory of that, and he just can’t seem to deal with those atm

I think it’s more the mental toughening that is required, he is not really that thin. Will do him the world of good if comes back to a bit more determined and cynical .

I don’t know, he seems plenty tenacious and hardworking I really think that a few of our players would benefit from focussing more on strength/balance/power – Pepe, Nketiah, Bellerin, Auba – all would be more effective if they were better at keeping their balance under opposition pressure. I get it’s a trade off between explosiveness and stamina (unless you go the Bayern route, sickening they got away with that shit), but those mentioned haven’t struck the right balance I feel Like look at Grealish – undoubtedly solid technically and creatively, but wouldn’t be half the player he is if he… Read more »

Fitness and core is so important to the animals that sportsmen should be. Eg Liverpool and Bayer have some of the fittest and built mothersokas 🥂
AMN tears out of his current skin and his balance increases and he’s the Viera monster .

Without Arsenal, this would have been the most boring transfer market in history. We should get a trophy!!

Like I wrote the other day, willock & ANR are the 2 of our you g guns that have dropped the most in their performance levels, yet both have a lot of football and talent within. Hopefully these spells and continuous game time will get them back on track

Like this move for everyone involved. Hope it pans out.

Hope he gets some regular game and we can sell him for a decent price in the summer. Not good enough for Arsenal

So then, is that all our surplus to requirement players either with cancelled contracts or loaned out? Who else, apart from Willian (whom we are stuck with either way) is left? That’s gotta be it, surely?

Well… currently Reiss Nelson. Unless this affords him more opportunities somehow. Given the huge competition for his position though I think he could do with another loan too.

Good luck Joe! Time to add Callum Wilson to the forward line in my FPL team. 🙂

Its a good move for Joe, giving him the chance to play more regularly and develop the talent he’s shown in flashes

Between Vinai learning how to change the ink cartridge in the fax machine and Edu turning it off and turning it back on again, all transfer business in this window was successfully complete with at least an hour to spare. Well done gents, a team effort all around.

I am finding this an increasingly funny image and for some reason, I can’t stop laughing!

Between first team and academy we have 18 players on loan. A few will be sold, but it’s going to be a big reshuffle next pre-season. Plus we have two loan in. Hopefully It’s a new way of making business for us and being self sufficient. We need to generate money from selling players

Hate to say it but Chelsea have made a good deal of loaning players out and getting them back better or selling them for profit, good if we can follow that model.

Wowee! The barber shops remain closed but we be trimming!

What about Reiss though? He needs a loan more than anyone.

He has to improve mental side of his game to be a squad option for us. Do things that makes observers go “Oh, that’s smart”. Midfielders of Arsenal don’t have option to be bad decision makers.

Hope this works for Joe, i really do.. But im worried about him, I don’t see how much he can improve. Hes already 3rd/4th choice in every position we can play him ESR and Saka have completely changed the pecking order in the first team and amongst the youths. It would be fantastic if Niles, Willock and Nelson could have the same sort of impact Saka and ESR have had. Would bring a tear to the eye to see the five of them become Arsenal stalwarts for the future but of the latter three I mentioned I think only one… Read more »

Good move for all concerned. We’ll find out how good a player Joe really is at this level.

I struggled to see where the minutes would come from if he stays at Arsenal atm and I’m glad he chose to go out on loan to get more opportunities to play. Despite being involved in the Arsenal first team for some two seasons now, he is still just 21, so its not unreasonable to hope he could develop further as a player. I hope Newcastle would be that platform for him and good luck to Joe.

Nketiah should have went somewhere too.

Good shout. Though I think Arteta will give him minutes. Make or break time for him at Arsenal

The player we see in the Europa League hasn’t materialized in the Prem just yet. But I still have hopes for Willock. Like ESR, his skill set offers something unique to the club. I hope he’s played as a number 8 at Newcastle. He needs to refine his skill set and then he could become a very valuable asset for us.

Nelson stayed out then?

Newcastle is a toxic club. I hope it works out for him because the fans’ feeling towards Bruce and Mike Ashley is so negative they are kind of just constantly destined for failure. If Bruce is still there at the end of the season then Joe probably will have done ok. Great that we’ll get to see more of him though.

This is one we need to cash in on.

He’s not good enough for the Arsenal.