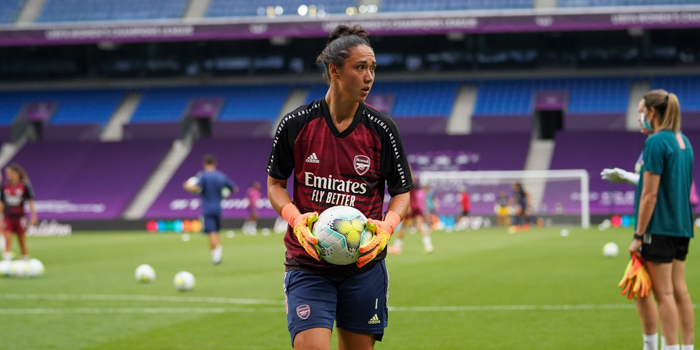 Gunners goalkeeper Manu Zinsberger extended her contract this week. Signed from Bayern Munich in 2019, the Austrian is renowned for her ability with the ball at her feet- an important component in Joe Montemurro’s possession style.

Arseblog News chatted with Manu on Friday and the 25-year old says that her and the other goalkeepers regularly take part in training with the rest of the team to sharpen up their passing.

“We take part in ball possession games so we can try to connect better to every player. We have our own part of training but we can join in with ball possession or just joining in with small sided games. It’s quite a lot of fun for us to join in with the possession drills and play with our teammates a little more.”

Aged 25, Manu trains and competes with two goalkeepers at very different stages of their career in 19-year old Fran Stenson and 32-year old Australian international Lydia Williams. “Someone has to be the in-between one!” Zinsberger jokes. “We have a great balance, Fran is amazingly talented and she is a big part of Arsenal’s future but I still learn a lot of things from her too.

💭 “I mean, just look at the team! We have so much quality in the team and I think also the staff around us makes it unbelievable, so I’m just happy to extend my contract.” @Manu_Zinsberger ❤️

I first spoke to Manu shortly after she signed for the club in the summer of 2019 and she told me then that she considers herself an extrovert- “I want to be loud!“- she joked at the time. So what does she make of training with Lydia Williams who is renowned for her commanding vocals.

“Being loud means many things,” the Austrian laughs, “For me a lot of the position is about communication and leading the team on the pitch. I can also be loud off the pitch, yes. It’s an area where I am still trying to improve myself and, as you said, Lydia is loud! She is an unbelievable leader and you can see that when she is communicating with her defenders and I really look up to her and I am trying to learn from her, because that’s the way I want to be loud.”

I know that there are many critics of Manu and her new deal on this blog but what I am really worried about is a quote from Manu in a similar article to this on the Arsenal website. It reads: “It’s not just about the simple balls to the centre backs. Maybe it’s the other options where you can try something a bit different and maybe take four or five opponents out of the game with one pass. Sometimes it can be a little bit tricky because Leanne [Hall, goalkeeping coach] doesn’t like it that much” My concern here is… Read more »