THE LOWDOWN
Arsenal face Manchester United at Meadow Park in a season defining game on Friday evening. They trail their visitors by six points in 3rd place- the final Champions League qualification place but have a game in hand and a vastly superior goal difference. Winning this game keeps Champions League qualification in Arsenal’s hands, anything else keeps it firmly in United’s hands.

The Gunners have put together consecutive 4-0 away wins against Aston Villa and Birmingham City after an interrupted and unhappy start to 2021. They have some rhythm, however, United corrected their course with a 3-0 win over Aston Villa last time out having suffered consecutive losses against Reading and Manchester City.

In the reverse fixture, United were good value for their 1-0 win as the Gunners struggled to play past their high press. Like Arsenal, Casey Stoney’s side have been hit with a succession of training ground injuries of late, Ivana Fuso, Tobin Heath and Leah Galton are all unavailable while Christen Press missed the 3-0 victory over Aston Villa. Kirsty Smith and Lauren James are back for United, however.

This is, put simply, a must win game for Arsenal. Finishing 3rd and qualifying for the Champions League would have been the absolute minimum expectation at the beginning of the season, finishing outside of the top three would represent under delivery considering the level of talent in the squad. Arsenal also need to correct their record in big games and they don’t come much bigger than this one.

A WORD FROM THE COACH
Joe was asked by Molly Hudson from The Times about the injury situations at both Arsenal and Manchester United this season and asked whether part of the solution lies in player recruitment. “We obviously have to look at a little bit of robustness in regards when looking at players who maybe historically have been involved in international tournaments and a lot of Champions League games where they’re able to back up games.

“There’s no doubt that holistically we can look at little details even in terms of when we look at players and their history and what sort of injury and whether they’re reoccurring scenarios so we can all do things always better. I think you have to get into these situations to make things better at times, so it’s important that we assess these situations and we can be better.”

TEAM NEWS
Jen Beattie is not available after suffering a recurrence of a calf problem, while Steph Catley (hamstring) and Viki Schnaderbeck (knee) are still out. Joe also told Arseblog News that they had concerns over one other player but was not forthcoming on the identity of that player. Kim Little could come back into the team after coming off the bench against Birmingham last time out. In that Birmingham game, Montemurro fielded Miedema as a number 10 behind Caitlin Foord at centre-forward and he may be tempted to repeat that experiment here.

Having started Miedema behind Foord against Birmingham, here's my analysis why they should do the same again

LAST TIME OUT
United were 1-0 winners in the reverse fixture in November thanks to a late goal from Ella Toone. The last time the sides met at Meadow Park was in the 2019 Conti Cup semi-final when a Vivianne Miedema brace was enough for a 2-1 win for Arsenal.

THE OPPOSITION
United started the season with fantastic momentum and headed into Christmas in 2nd place just behind Chelsea. The resurgence of Manchester City, as well as defeats to Chelsea and Manchester City since the New Year have seen them fall back into the race for the final Champions League qualification spot. United have certainly turned the WSL’s big three into a big four this season.

PLAYER TO WATCH
With Jen Beattie injured, Lotte Wubben-Moy will likely take her place in the centre of defence. Lotte played in the game in November at right-back. One of the reasons Joe was so keen to bring Jen back to Arsenal is her calmness in possession and it’s a trait Lotte will certainly be working on. She has excellent pure defensive attributes and is no slouch on the ball- especially when it comes to carrying the ball out from the back.

United are likely to put her under a lot of pressure on the ball and how she either uses the dribble or left-back Katie McCabe to exit from those situations will be key. United are also likely to field Lauren James upfront and her trickiness in the dribble is a key weapon for the away side, as we saw with her excellent equaliser against Chelsea recently. 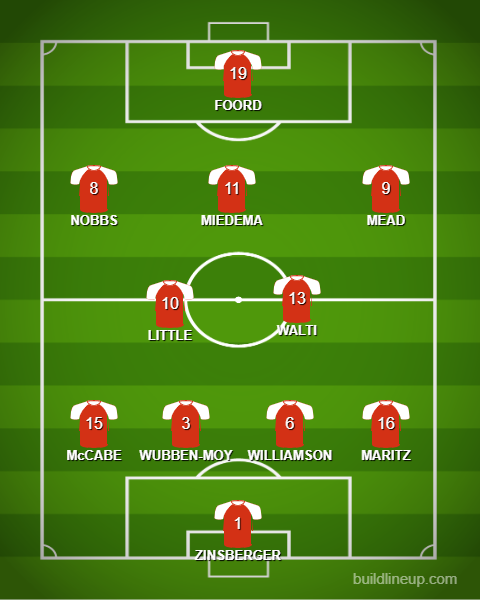 HOW TO CATCH THE GAME
The match takes place behind closed doors at Meadow Park and kicks off at 6.30pm on Friday evening. The game is live on BT Sport 2 in the UK, Opus Sports in Australia, the NBC app in the US (precise channel tends to be confirmed on the day of the game), Sportsnet in Canada, Spark Sport in New Zealand, SABC Sport in South Africa, V Sport in Norway, Sweden and Finland, Viaplay in Denmark and Iceland, AtaFootball in Germany and Italy, Charlton Sport in Israel, Canal 521 in Central America and the FA Player app (free to download on your phone or tablet) everywhere else.

COMING UP
We will have post-match reaction from Joe Montemurro on the site on Friday evening as well as an analysis piece on the site over the weekend. We will also have the usual build-up to the match away at Tottenham next weekend.

Let’s not give up before we start! I’ve just bought a month’s pass to BT Sport so I really am hoping for a boost after tonight’s tired performance from the men’s team. United haven’t been doing so well recently; losses to City and Chelsea weren’t so surprising but I thought they looked poor against Reading. They have picked up recently, but then so have we. There’s been some interesting analysis of Viv’s deeper role against Birmingham. It did work but I still felt there was a lack of link-up play between Lia and the forwards – we tend to become… Read more »

Ray Kennedy nodding in the winner on Spuds home ground for us to win the league! That was my favourite match I ever went to even though I was young and shorter then so I didn’t even see the ball hit the net because the Arsenal fans at the far end all jumped in the air as one and I couldn’t see! But, I was there. 🙂

Arsenal need to find a way to score at least two goals. The team has not scored 2 goals in any match against any of the big three (Chelsea, ManCity, ManU) all season—and of course in at least two (maybe three?) of the games the Gunners scored 0 goals. The team has got to get the ball in the net. Beattie is good when she’s healthy but she has great trouble staying fit. Speaking of fit, if Catley was (ha) then we could play McCabe up front on the left, which I think would benefit the team as she could… Read more »

Probably the biggest game for Arsenal’s womens team in resent past, because not making to Champions League for next seasons, means that we have no hope of keeping Viv. And losing best striker in the world just before her prime, because we are not good enough for her, is awful for team’s standing in football pyramid. Same time even if we win tonight and finish in 3rd, for me we still have had an awful season and big rethink about team, coach, tactics, injury prevention is needed. ManU is player against player so much less talented team, than we are… Read more »

You hit the nail on the head there! “Project” what is a project? Football is a competitive sport and the point of competition is that you win not put in some half arsed performance now because you might come good in 3, 4 or 5 years time! As much as I like Joe as a person, he does not have the ‘winning mentality’ that is required for a top team and it filters down to the players. As you say, look what Casey has done with a squad that is not as accomplished as ours. Don’t agree with your worst… Read more »

Lotte just gets better and better!

Even without that goal she was player of the match …