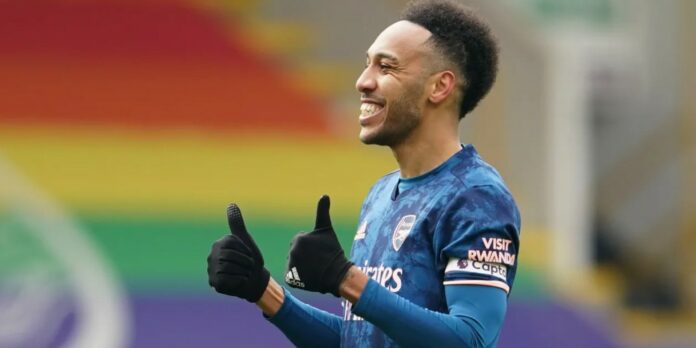 Mikel Arteta thinks Pierre-Emerick Aubameyang will probably head off on international duty this week and said it might not be a bad thing for the captain who could benefit from a goal.

Gabon has two AFCON qualification matches coming up during the Interlull. On Thursday, they face DR Congo at home and then four days later they are due to face Angola.

Given the second match would require Aubameyang to visit a country on the UK government’s travel ban ‘red list’ it’s unlikely Arsenal will sanction his participation because he’d then have to quarantine for 10 days on his return to London. It seems we will release him for the first though.

“We believe that he’s going to be okay to go,” said Arteta after Sunday’s 3-3 draw with West Ham.

“We still have a few other issues with some players that are feeling some issues, so I don’t know.

“Unless some rules change or some countries are going to the red zone, I don’t know how the situation is going to be.”

A change of scenery might not be a bad thing for the captain. Out-of-sorts yesterday, he was substituted in the closing stages and was off the field when we equalised. Having missed the north London derby for disciplinary purposes and with a hattrick of misses to his name in the defeat to Olympiacos, it was a week to forget for Auba.

Asked if he’d rather Aubameyang stayed in London to focus on rest and recuperation, Arteta said:

“Well, you never know. Sometimes if they play a game and he scores and he is out of the environment and then comes back, sometimes it’s good to have him here because then we can train specifically on things that will be important. But it’s not in our hands.

The last time Aubameyang went on international duty he and his Gabon teammates were forced to spend a night sleeping on an airport floor due to a diplomatic row with opponents Gambia.

As things stand we believe the following Arsenal players will be going off on international for at least one game:

And these guys will report to training after a couple of days off:

As the article mentions, it’s been a nightmare week for Auba so an international match may help him to re-focus. Let’s hope that all the players return fit and well and ready for the remaining games of the season.

Not sure why we started him on the right yesterday, he doesn’t look comfortable there

Currently Lacazette deserves to play centrally ahead of Aubameyang, he offers much more to his game

We need to use our squad, but my preference would be Smith-Rowe on the left

Our captains stock is rapidly falling, he needs to get his head down and improve his overall performances, towards the end of last season it wasn’t just his goals that caught they eye, it was his overall work rate, and that needs to return

Salibaba and the Forty Thieves
Reply to  Rich

100% agree. The only thing I can think of for why he played RW is that Arteta probably took notice of the exchange between Auba and Tierney when Pierre said he wasn’t going to chase Kieran’s through balls in the middle Olympiacos defeat.

Maybe things are still a bit frosty between the pair and Arteta wanted to limit Auba’s interactions with Tierney by placing him on the opposite wing. I did notice for Soucek’s header, Auba didn’t double up well with Tierney at LW and Lingard had an easy cross into the box.

Goo-nerd
Reply to  Salibaba and the Forty Thieves

Auba doesn’t work hard for the team. I don’t think he’s ever won a header outside the box in his Arsenal career.

Salibaba and the Forty Thieves
Reply to  Goo-nerd

Crash Fistfight
Reply to  Salibaba and the Forty Thieves

He’s not exactly physical though, is he? He doesn’t win many aerial duels inside the box, either.

He has looked lazy/sluggish recently, but I don’t think it’s true to say he never works for the team. I mean, he tracked back about 50 yards to win the ball off of Lingard in the last game alone.

just not consistent unfortunately….he defends from time to time and clearly doesnt enjoy it

Auba needs to sort himself out, his feeble displays are worse than Ozil and Willian. Maybe a week away will help focus his mind, at the moment we’re a better team without him playing.

“Pierre-Emerick Aubameyang’s repeated tardiness is a problem for Borussia Dortmund, the club’s sporting director Michael Zorc has admitted.” Auba also missed a briefing and was fined and left out of games. All that culminated to why he was transferred to Arsenal.

If he is angling for a move then so be it if we can get a decent fee. I still have time for him despite the current travails but i dont think he is quite the crucial asset he seemed to be a year ago. Could be useful for the transfer kitty and for bumping up the contracts of the younguns we hop will take us forward

It’s tricky. I would be surprised if he wasn’t with us next season. At 31, we could get a reasonable fee for him as you say – he’s still got a couple of years (I guess) at “the top”, but having gone through an extended contract re-negotiation not so long ago, I’d be surprised if the club would offload him now. That said, for whatever reason, or combination of reasons (not all down to him I suspect) he is clearly a shadow of the top, top quality striker we saw last season. It’s really down to Arteta and colleagues to… Read more »

If he transferred to middle East, use. Better lock down conditions for family ?!
They would have money to do deal.
Could Depends on how the season ends.
Whether we can or
We can’t say but your missing out on champions league

Man, Xhaka’s legs would surely love a breather. Considering there’s EURO this year, they can already book a proper holidays for summer 2022 (luckily for them, the World Cup starts later that year)

Well most of the defence is sitting at home in this interlull so perhaps Arteta can get to work on this issue!!! Luiz needs a rest, but for me Gabi should have played yesterday!!! Indeed Gabi and Holding, Mari and Holding looked good combinations so not too happy with the constant chopping around in defence!!

The staying at home bunch isn’t a bad team

Its still our Scotland international im most concerned about. Likely wanted for all three fixtures despite being one of our players most in need of a rest

How often is he likely to play, though?

Auba has games with Gabon and Partey doesn’t have any with Ghana?

Ghana isn’t on the red list but their first game this week is South Africa away – which is on the Red List.
I’m surprised he (and Jordan Ayew) are not in the squad just for their home game though. It will be the last game of the qualifying group – and they may need a result to qualify for the tournament.

Swap him for Odegaard

There seems to be a correlation between players being paid in excess of the majority of the squad and poor form.

If anyone can remind me the last time that scenario wasn’t the case then I’m all ears.

I may be wrong, but I think Pepe plays twice, because Ivory Coast and Niger are not on the red list

Hopefully he plays as a #9; he really needs more shooting and finishing practice.

You can add Karl Hein to that list (Estonia) and a few of our loanees have been called up too; Kolasinac, Ballard, Mavrapanos, and Guendouzi (U21).

Arsenal.com now saying Partey will be in the Ghana squad for their second game – https://www.arsenal.com/news/march-internationals-whos-playing-and-when

Here’s to hoping Saka, Tierney, Xhaka and Odegaard will be used lightly, as they have been playing a lot recently.