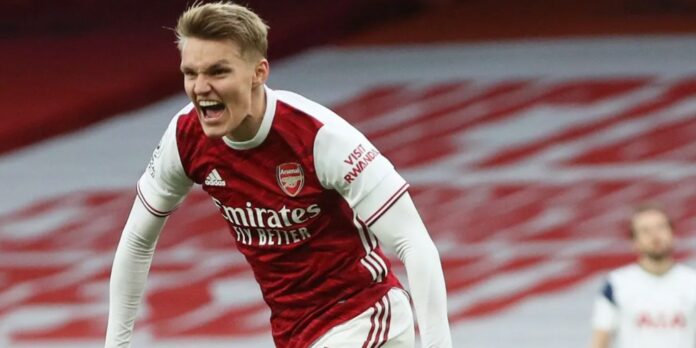 Mikel Arteta says Arsenal’s medical team will monitor Bukayo Saka’s hamstring after the England international was forced off during the 2-1 win over Sp*rs.

Saka showed no sign of discomfort in the opening 45 minutes but was replaced by Nicolas Pepe at the break as the Gunners came from behind to seal a vital three points.

Having started the day with no fitness problems, it’s certainly a worry that one of our most important players is potentially nursing an injury with more big games on the horizon.

“We don’t know,” said Arteta when asked how serious the problem is. “He was feeling his hamstring, so we will monitor that.”

Despite Saka’s absence, the Gunners midfield continued to dominate after the break thanks to the efforts of Emile Smith Rowe and Martin Odegaard.

Both players were full of energy and attacking threat throughout the game with the England youth international crashing a tremendous effort against the bar and our Real Madrid loanee grabbing a vital equaliser; his second goal of the week.

Arteta raved about both players in his post-game press conference.

“I think he had a magnificent performance again,” said the boss when asked about Smith Rowe.

“I think he shows not only quality but his personality, his intelligence on the pitch, his energy. He gives us something different. Today in a derby you need some individual performances and for sure he had one.”

On Odegaard, he added: “He’s got a real stamina and he’s so talented, but his work-rate is incredible. Not only that, he’s intelligent. The timing of his runs, when he presses, his body shape.

“I’m really impressed and he had an incredible performance today. He’s giving us something different and it’s making us better.”

Odegaard may have found his forever home.

Let’s all hope Real Madrid think that. If they don’t his forever home will be a little more temporary I fear.

“Intelligent” was exactly the word.

That would be apt return on the investment in terms of playing time in the No. 10 position, at the cost of one of our own – ESR.

ESR for his part has adapted to the left and it would be good to have them both in the squad for the long term competing and backing each other up for the creative role.

I hope Tierney is rested for Oly and Saka doesn’t suffer any lay-off.

Saka definitely needs a rest. MO is capable of playing wide to the same degree as ESR. Hopefully we can sign him permanently for a reasonable fee. A damn shame we have Willian getting minutes though. Saka, Pepe, MO, ESR, Martinelli supporting Auba should be enough.

Not saying he’s on the same level, but I thought of Bergkamp today, the way he’s comfortable in tight spaces. I thought he’ll lose the ball a few times, then a fancy flick here and there, and he’s found a team mate with a perfect pass

You can’t compare him to Willian though…

I can’t get over how mature he is in terms of his decision making. I’ll be honest, I assumed being a teenage sensation that he would be all tricks and flicks and flair, but his ball retention is amazing, as is his understanding of the game and his calmness in possession. I really think we’ll struggle to keep him though. Even if Zidane says he can go, with every great performance his value gets even more out of reach and I also would assume a lot of other Premier League clubs would be seriously interested after seeing the impact he’s… Read more »

What are you smokin dude…Odegaard is another Ozil in waiting. Wedged in at the expense of better players in their best positions. Madrid don’t rate him for a reason similar to not rating that waste of space Ozil yet we’re again all over their cast offs…he’ll flick it here and there and “look intelligent” but playing him means no ESR in his best position and no starting Pepe…team is better without him.

I actually thought he was brilliant yesterday. I agree that he has a similar playing style to ozil, but he has more tenacity and willingness to defend and get stuck in. I didnt know what to expect from him as with all teenage sensations, but its starting to look like arteta has pulled off a bit of a coup in signing him. I really hope he is an arsenal player next season.

I think our original fears about Ceballos are playing out with Odeguard, showing Real and the world how good he is. I would hope If we don’t get to buy him that we can get him on another year loan so we can invest in other areas of the park.

My hope is that Real giving Modric an extension means we can push for a perm signing. Or at least a full season loan

everything coming out from the club and Ødegaard lean towards a long term deal in the summer.
I think MØ has grown tired of not playing for Madrid and wants to build a relationship with a club. His previous year at sociadad showing him how good it is to have fans love you and a manager who needs you. Arsenal are a great club to do that with, and at a time where he comes in and can be part of its foundations rather than an auxiliary piece.

You get the sense he likes it here!

Yes, but there’s no purchase clause in the loan deal so it’s really down to Real Madrid and latest reports say they want him back. They are in some financial difficulty and that could work in our favour. However, if he continues his good form other, more successful clubs, offering CL football say, and with deeper pockets will become interested. There’s a few months to go so best not to get too enthusiastic about any permanent move yet.

I feel it’s down to him, if he is truly done with Madrid (having 2 great experiences elsewhere) they will sell

We are also in financial difficulty but we should really try to get him. He’s an Arsenal type player.

Realistically, the player he was competing with for a regular place was probably Luca Modric. You know, the ballon d’or–but a serious decline since. If Zidane stays, I think we’ll have a chance at Odegaard, but not otherwise.

Although I’m from Norway I have to say that Martin Odegaard has a big role to play in this team. Who is running the most? Picking the pocket? Always wanting the ball!?! Starting the press. Love Martin and think that the sky Is the limit for him… Newly appointed National team captain and scored in the El and PL for us this week. Let’s keep this diamond. 🙌

The loan paradox. The better they play the harder they are to sign.

I wonder if Odegaard has the will or the power to force a move to Arsenal..?

I’ve been wondering the same thing. I think he does.

For almost any other club in Europe (at least one run with any degree of intelligent forward planning) I’d agree that they’d be monitoring Odegaard and it could be a problem for us come the Summer if his level of performances continue like this. But the thing is, this is Real Madrid. Unless he’s having the kind of in-game impact of an Mbappe or Haaland, I honestly feel like Real really won’t do much to keep him if the player himself wants this move made permanent, and we push hard enough for it too. Real’s obsession with the ready made… Read more »

Only if that ESR effort would have went in….what a goal it would have been and I wouldn’t have to hear the commentators calling Lamela’s goal a worldie,it wasn’t c*nt got lucky.

I see it like that: Whenever I’ll see highlights of that goal in the next years I will smile, knowing that the pr*ck got sent off later and spuds lost that game to a much better Arsenal team. And I think this goal has a better chance of being voted as PL goal of the season than spuds goal of the season, which I somehow find very entertaining haha

Glad to have Ödegaard in our team.

Hopefully Southgate uses his common sense, a 3 week rest for Saka would be ideal now

Hopefully we don’t rest him against Olympiakos + West Ham, only for Southgate to beast him with 270 minutes over 6 days

Hopefully it’s nothing serious with Saka, he could probably do with a bit of a rest anyway though. A couple of months ago we absolutely couldn’t do without him but now Pepe looks capable of filling in. Odegaard edged ESR for MotM for me today, but how good is ESR?? Was interesting to see comments over the last couple of weeks saying he can’t play on the left, or that he needs to be in the middle. Like to think his performance today has put that to bed, kid is a serious talent. On Odegaard, really tekky performance today confidence… Read more »

Smith Rowe was outstanding today. Saka is suffering from excessive minutes and from the fact that all of Europe is aware of his ability to dominate a match so all teams have reverted to just kicking the shit out of him. In addition to Smith Rowe and Saka, we’ve got 35-40 euros worth of academy talent that, ruthless as it may seem, should be cashed in on this summer: Maitland-Niles, Nelson, Nketiah, Matt Smith, Tyrese John Jules, Ben Sheaf, and Mark McGuinnis. (I believe Arteta will keep Balogun and recall Joe Willock). Hale End is an under-reported part of the… Read more »

Did anyone notice Kane forearm smash Gabriel quite deliberately and maliciously but not get any penalisation whatsoever? Slobbering wanker!

Would have been an unpopular opinion 6 months ago but a lot of people would now agree with you.

Cedric is less reliable in the defense than Bellerin. Bellerin hardly ever makes mistakes, Cedric makes at least one per game, sometimes so bad that they lead to instant goal conceded.
Cedric has really had like 3 good games and one beautiful cross and that’s all people remember. Bellerin on the other hand has been solid all season long, and lately he’s been getting good in the attack as well, really developing a chemistry with Saka.
Don’t hype Cedric too much because you’ll have to bite your tongue when he blunders, because he blunders frequently.

A Different George
Reply to  ThornBull

Cedric was being bashed for the deal that brought him here, when anyone who had watched him play for Southampton or Portugal knew he was a fine player. Now, when he plays exactly as he has shown himself capable, he is being over-hyped. Bellerin is a better fullback. He is consistently under-rated by some (too many) Arsenal supporters for non-football reasons.

Should not take precedence over Pepe – a permanent player with good output. Set up the pen again today

To extend ESR we should push the boat out. Then get another boat and push that out. Then keep getting boats and pushing them out until he signs.

Odegaard is a fine baller. Sign him up permanently please 🙏

Stop the passing out from the back and get Martinez back (unlikely), whoever sanctioned his sell should leave now!

Please we should not only want him on loan basis again, we should rather want hin on a permenent basis.

Arsenal should press for Odegaard permenent purchase. We him and Smith our midfield is balanced. We should only be looking for another young energetic striker in form of Chelsea’s Austin Odio. And again Balogun should be given a chance in senior team to test his ability.